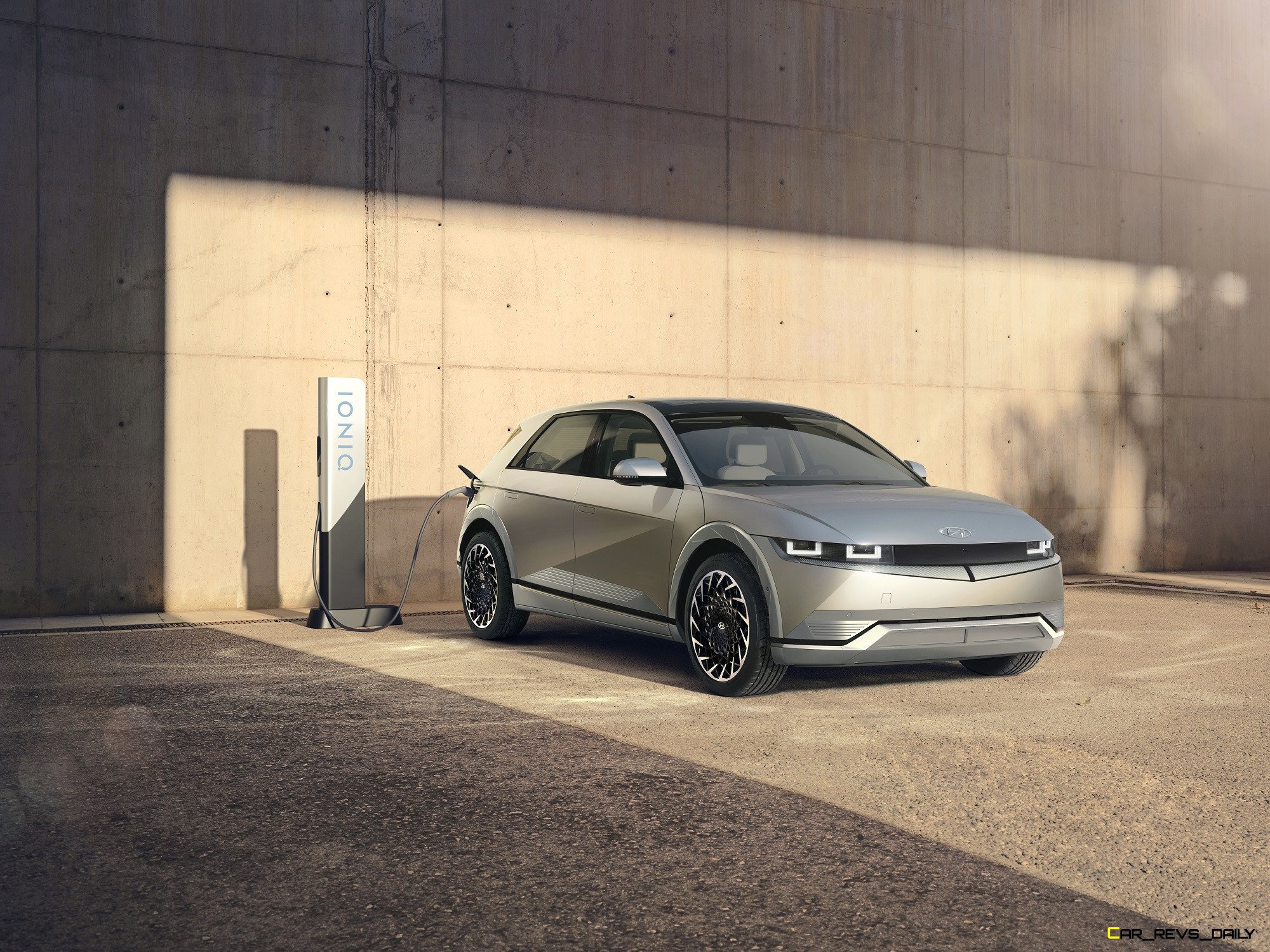 When Hyundai revealed that it was launching the all-new Ioniq sub-brand, we were very interested in seeing what would help spearhead the launch of this green-focused brand. After months of teasers, the Korean car giant has answered this key question with the unveiling of the production version of the 2022 Ioniq 5 EV. The Ioniq 5 might look like a hatchback initially, but it’s actually an advanced SUV and aims to change the way buyers look at electric cars in a few key ways.

One of the Ioniq brand’s core driving points is that it will put a firm emphasis on design, with the Ioniq 5 serving as a very compelling preview of this in action. The car shares the bulk of its design with the 45 concept which originally made its appearance at the 2019 Frankfurt Motor Show. The highly angular body features sharp design lines and small overhangs that help it retain its compact dimensions.

Other goodies include Aston Martin-style pop-out door handles and even side camera mirrors with occupants seeing the feed via door-mounted screens. That latter item won’t be legal in all parts of the world (we’re eying you NHTSA), but it appears that Hyundai will also have traditional mirrors available to help the car comply with those particular regulations. The Ioniq 5 will also feature 20-inch aerodynamically honed wheels. The novel hoops have the distinction of being the largest set of this type that Hyundai has ever equipped to a car.

The front fascia is very sporty, with rectangular-shaped headlights helping light the way during nighttime driving. Hyundai engineers also focused on convenience, with the Ioniq 5 having a charging port on both sides. To help cut down on panel gaps, Hyundai decided to pitch the traditional hood and replace it with a clam-shell type to reduce excess panel gaps. The rear is very clean looking, but it lacks the spark projected by the front end though we will give props for its hatchback appearance.

Ioniq 5 Interior Makes Full Use Of Its Underpinnings

The Ioniq 5 is the first model to be built on the E-GMP platform, and this solid set of underpinnings pays big dividends in several key ways. For example, it allows the car to have a completely flat floor, which helped increase the amount of passenger space and allowed engineers to add a sliding center console. The trick piece can move up to 5.5 inches in either direction. Not only does this help enhance comfort, but it can also allow passengers to exit from the opposite side of the car if they are in a tight parking space, especially in a bustling urban city center.

The wheelbase also plays a role in enhancing space, with the Ioniq 5 actually being 3.9 inches longer in this regard than the Hyundai Palisade. In this case, it allows the Ioniq 5 to have up to 18.7 cubic feet of space with the seats up. Fold them down, and that figure grows to 56.5 cubic feet. The E-GMP platform also allows the EV to have a drunk to help augment its hauling abilities, too though it does partly depend on if you equip it with an all-wheel-drive or not.

A pair of 12-inch screens are mounted on the dashboard, with both of them being housed in one large pane of glass. Mercedes-Benz and its hyper-screen technology first teased this idea, and it’s good to see that Hyundai will be adding the same concept to a vehicle that will undoubtedly be aimed at the mass-market. Augmented reality support is also part of the package, and Hyundai revealed that the interior is largely made out of recycled materials, including PET bottles. The seats are also made from environmentally friendly material, and the front ones have the ability to recline fully, which helps create an almost weightless experience (we will have to wait until we have the chance to try this out in the real world to see if that is indeed true.)

When the 2022 Ioniq 5 eventually makes its way to dealerships, buyers will get to choose from two different battery packs, with the base model featuring a 58 kWh battery pack while higher trims get a beefier 77.4 kWh pack. Stick with the base trim, and you get one electric motor mounted at the back. Buyers looking for more low-end punch will enjoy the second front-mounted motor, which also comes with an all-wheel-drive system. The 5 is not meant to be a performance model, which shows its rather paltry 115 mph top speed.

But the fun is not over yet, with Hyundai also allowing buyers to get a bigger battery pack which in turn helps push performance all the way up to 302 horsepower and 446 lb-ft of torque. As expected, the 0 to 60 time drops to 5.2 seconds, and look for this setup to be the go-to choice for weekend warriors looking for spirited responses in winding turns.

A clever feature that the Ioniq 5 brings to the forefront is its solar roof technology. Hyundai has dabbled with solar roof technology in the past, with the Sonata Hybrid having a similar system. Like that offering, the Ioniq’s is designed to improve efficiency with the roof absorbing solar energy to help increase range. The glass is also one single piece and does not use any supporting materials, enhancing the spaciousness inside the cabin.

All of the performance figures are very impressive, but in the world of EVs charging your ride is often just as important. In the Ioniq 5, it aims to eliminate some of the anxiety associated with the task. For example, the battery can be charged from 10 to 80 percent in 18 minutes when it’s hooked up to a 350-kW charger, and the car is allowed to use its 800 V charging capabilities. Charging for only 5 minutes gives enough range to go 62 miles according to WLTP measurements. It will be interesting to see what translates to when the model is measured with U.S. e-mileage estimates.

Hyundai is confident that a rear-wheel-drive model with the larger battery can get 298 miles on a single charge, but with the company still trying to finalize numbers as of this writing, we will have to wait a while to see if that figure holds or not. One interesting highlight that caught our attention is the car’s ability to charge and even power certain electrical equipment thanks to a novel V2L system built into the Ioniq 5. The system can provide up to 3.6 kW of power from a port located in the rear seats and a secondary port installed outside the car. While this setup is a bit different from the Ford F-150 Hybrid’s onboard generator, they share the same basic function with this system, potentially supplying power to appliances as well as larger household items. As a bonus, the outside port can work even with the car off though we are curious to see how this affects driving range when the car is tasked with moving again.

Suppose all of this sounds like your cup of tea you’ll be pleased to hear that the first units are expected to arrive in Hyundai showrooms later this year. It’s too early to talk pricing at this point, but buyers will have nine different colors to choose from, with five of them being exclusive to the Ioniq 5. The interior has four different hues available. The car is being targeted towards younger buyers, especially those that like having design and novelty with their green vehicle entree.

In addition to its own individual merits, the 5 will also be the first model of the Ioniq sub-brand. As a result, it will be tasked with helping Hyundai introduce the brand to buyers while also helping cement the brand to further facilitate their growth plans. That growth will really kick into gear in 2022 when the Ioniq 6 ( a production version of the Prophecy concept.) The 6 is arguably the Model S fighter of the bunch and will also be the one that embraces the sportier side of EV ownership. An SUV is also slated to appear, but we’ll have to wait a while to see it, with the model potentially appearing as early as 2024.