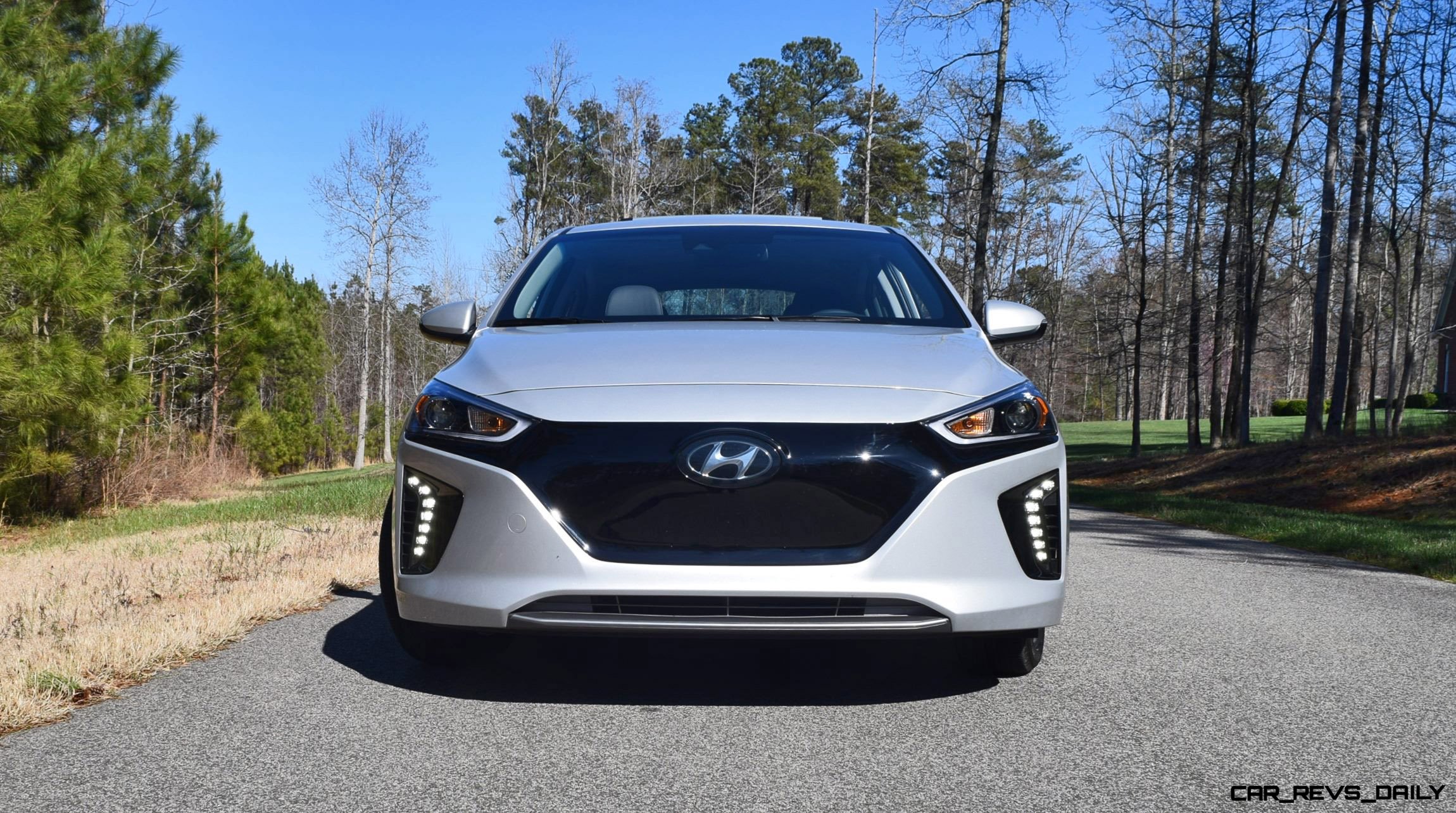 The sleeper hit of the Hyundai Ioniq launch?

This will be the rarest of the three Ioniq models as it will be sold in California only for the first year.  [First arrivals around April/May in stores, by the way, and Ioniq EV can be special-ordered nationwide at that time too.]

It was not just the incredible normalcy about the EV drive Ioniq that makes it surprising.  Really it’s the thoroughness of the engineering and exceptional value this car represents.

Hold your horses, though!  Let’s discuss what this car offers, how it looks, drives and feels.  Click play below for that spooky-silent EV sprint to 60-mph and a curvy road blast on HD video.  Normal section headings after that: Exterior, Interior, Performance and Price.

Ioniq Electric shares its design and much of its chassis with the Ioniq Hybrid and Ioniq Plugin models.  The two hybrids look virtually identical beyond the badges in back, but this Electric has a unique aero nose to mark its EV mission.  This comes in grey metallic plastic or a gloss black finish like on our loaded test car, the Limited, and swoops around the lower fascia before melding smoothly into the LED-accented headlamps.

The main low/highbeams get better with the top Limited Ultimate pack.  This includes twin LED projectors versus just the single unit in the base and Limited.

LED DRLs down below form the same inverted checkline as on the Ioniq siblings – with the only cutout in the solid face being the outside edge of the Hyundai badge oval.  The intake-free nose helps aero performance even if it keeps the same 0.24 drag coefficient as its siblings too.  It is smoother, just not the 10X smoother it would take for the car to become a 0.23 cD.

And frankly, the wrapped face is so unlike other cars that it does stand proud in traffic.  Looks modern and clean.

16-inch alloys are the top wheel size for Ioniq Electric, while this gas-free model also has unique LED brake light graphics versus its siblings.  Not as standard, however. These appear bundled in with the Limited trimline — one of two offered on the Electric.  (See Electric grilles below: gloss-black Limited on left, grey plastic standard IE right)

Hybrid and Plugin Ioniqs look like this, for comparison.  Full review here.

The cabin is a great place to be.  It feels normal in its visibility versus a Prius or high-rider like Chevy Bolt or Ford C-Max, and the seating position lets you get low and sporty.  Bonus: the rake/reach of the wheel also comes out 2X as far as low as Prius!  Sporty feelings indeed!

The next-gen cabin uses aolot of Genesis design elements along with eco materials.  Recycled plastics and some Earth-friendly cabin materials feel premium and well-assembled.  The deep-dish steering wheel with a flat bottom is a nice touch, as are the regen-controlling shift paddles behind the upper spokes.

Tap the ON button and you notice there’s no gearstick.  Yes, the lever has been swapped in Ioniq Electric for pushbutton controls.  This could not be easier: choose P R N or D.  The e-shifter also adds electronic parking brake, auto hold for traffic and hill hold for hills.

So normal and easy!  Feels like a premium Euro compact inside.  And very little trunk loss!  The Ioniq Electric has a much deeper storage area than the Prius Prime we recently tested — despite Ioniq having a 3X larger battery pack.

There are some great elements in how the Ioniq Electric drives.  First off, the silence and smoothness is always uncanny after any gas-powered car.  Just no friction and no sound or shifts on full throttle!  Soon enough, the refinement becomes a welcome treat.  This car is seriously hushed from tire/wind noise up to about 90-mph, when it starts to creep in.  We did crest 97-mph and the little IE was still pulling!

The Ioniq Electric is not fast but does have a Sport drive mode and driver control for the critical battery regen.  This is critical for keeping battery full as well as keeping you happy on the road.

Control here is key: cars like BMW i3 are hideous on first drives because the regen pull is too strong right when you come off the accelerator.  It is meant for “one-foot driving” and pops the brake lights on and all.  Super annoying, however, not to be able to coast.

So IE has paddles to choose: coast, and then levels one through three.  Three re-cycles most and two is the default for most modes.  Level One and Coast are what make EV’s drive like Tesla’s instead of like golfcarts, though.

Indeed, Ioniq Electric is much closer to Tesla in that comparo.  But it does have some issues.  The weight distribution with a 118HP electric motor in front puts all the batteries in the trunk and under the back seats.  This means Ioniq Electric has slightly unusual handling dynamics.  Paired with the limited suspension travel in back and hardcore eco tires?  Let’s just say the cornering balance, nose grip and steering feel are less-good than the other Ioniqs.

We love the range/price compromise Hyundai found for the car.  It can travel 120-miles and has a built-in fast charger capability as standard.  This adds cost to Leaf, Focus Electric and Chevrolet Bolt.  It is also compatible with third-gen charger systems for a super fast refill — 80-percent in 30 minutes.

Ioniq Electric about matches Focus Electric and Leaf in range then, but is down 100 miles versus the 240 promised in the Chevy Bolt.  28kwH Li-ion pack for Hyundai plays 60 in Bolt, so IE is actually more efficient.

Update: Pricing is out!  Much lower than we remembered – impressive!

This gets alot friendlier with $7500 federal tax credit and $2500 California EV incentive — down to perhaps the high 20’s once all is said and done.

For that price, the Ioniq Electric is clearly a loss leader.  So much advanced engineering and so many expensive, cutting-edge components in here!

Hyundai also thought of that: the entire battery system for Ioniq’s will have a lifetime warranty, beyond the 8yr/100k miler that the feds require for electrics.

Ioniq Electric proves a couple things about Hyundai in the EV tech race, in addition to being tremendous value.

One, the brand is in it to win it — investing billions to be a global leader.  Two, the EV revolution is definitely coming. The incentives are great but the refinement and tranquility of the cars on the road seals the deal.  Try as they might, no Rolls-Royce is as smooth and silent at town speeds.

Want to be less conspicuous than Tesleratti as you save the planet?  Ioniq Electric brings EVs to new levels of appeal.

Just so easy and so normal to drive and own!