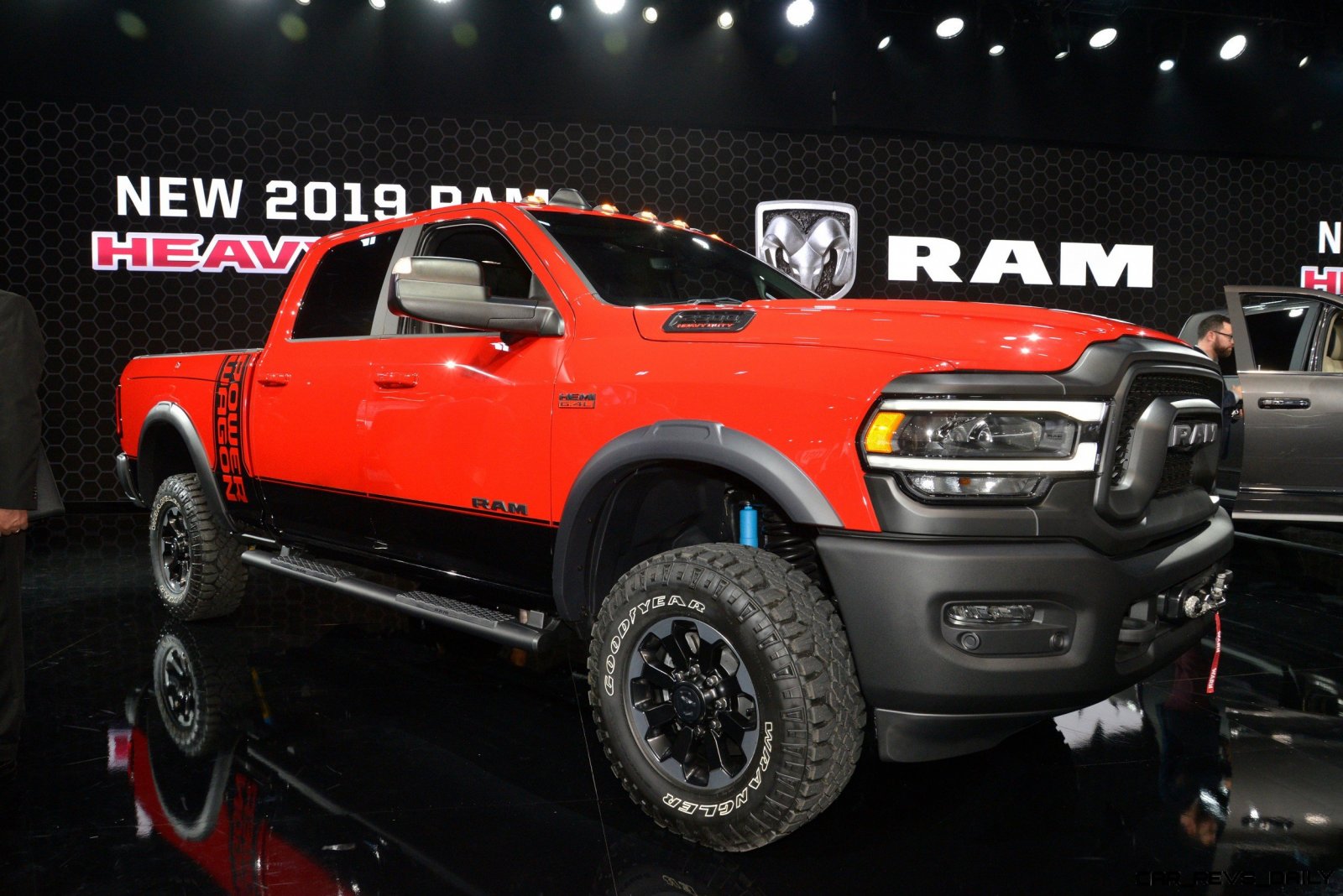 Ahead of its highly anticipated debut at the 2019 North American International Auto Show tomorrow, Ram has released images and information regarding the 2019 Ram 2500 and 3500 HD lineup, and after having a chance to look over some of the specs that Ram has posted in its press release. It’s clear that Ram engineers are truly going for broke when it comes to outdoing their domestic rivals in sheer capability, technology, and refinement.

Before we get into some of the other aspects that define the 2019 lineup, lets take a moment to look at arguably the most defining thing about the 2019 Ram HD, the torque figure.

Wheras GM and Ford wield engines that still boast torque figures in the mid 800 to 900 lb-ft range, Ram has decided to blow both of its foes out of the water by offering 1,000 lb-ft of torque (being the first mass production HD pickup to pull off this impressive feat.) While the base Ram HD model is powered by a 6.4 liter Hemi V8 that generates 410 horsepower and 429 lb-ft of torque, buyers looking to access the earth shattering 1,000 lb-ft figure we described earlier will have to opt for the optional 6.7 liter Cummins diesel engine, which has been heavily updated for the 2019 model year.

But back to the basic exterior design of the 2019 Ram HD lineup, and it’s clear to see that a lot of the DNA from the 2019 Ram 1500 has made its way into its beefier cousins for the new model year.

The front fascia features an all new grille treatment with the headlights also being tweaked as well. Ram engineers left no stone unturned in this radical redesign, with the 2019 Ram HD utilizing aluminum components in as many places as possible. This includes the hood, as well as select frame components, with high strength steel still being used in areas where maximum rigidity was required.

A novel rear air suspension system continues to be offered, but Ram engineers have added a feature that actually lowers the rear of the truck for easier access, as well as reducing the effort needed to load or unload cargo from the bed. The overall look is less blockier than before, and each trim receives a unique RAM embossed front grille, with six total grilles in all for the entire model range.

The interior of the 2019 Ram HD was designed to bring luxury car levels of quality and quietness to buyers. Active noise cancellation, and acoustically honed window glass help hush out wind noise, while the class leading space inside the cabin offers 12 different storage combinations. Higher quality materials are also on hand, and like the 1500, the bigger HD models boast more color choices than ever before, and each model brings a unique theme to the cabin that serves as an excellent way to differentiate them from one another.

A hand stitched leather instrument cluster and wood accents bring a touch of luxury to higher trims, while improved plastics and better cloth seats define lower end models. A lot of the Ram 1500’s equipment gets transferred to the HD, and that includes the optional 12-inch Uconnect infotainment system ( a 7.0 inch screen is standard fare.)

All Ram HD models will come equipped with push button start, and a rotary dial to control the transmission. Buyers will also benefit from wireless charging, five USB ports, amd three 115 volt charging ports. Speaking of those 115 volt outlets, the Rambox storage system also gains a 115 volt charging outlet for fast charging out on the work site, or when you need to charge an item outdoors.

We never faulted the Ram HD lineup for lacking much in the past, but this suite of revisions aims to resolve whatever flaws existed, and this obsession with perfection in every detail, as well as the outright absurd amount of torque shows that Ram is very keen on keeping the 2019 Ram HD in firm lock step with its highly successful 1500 counterpart.

That could cause Ford and GM to have some uneasy nights of sleep and renew the flame under their fires to try and keep their models up to speed with this potent disruptor from Ram.