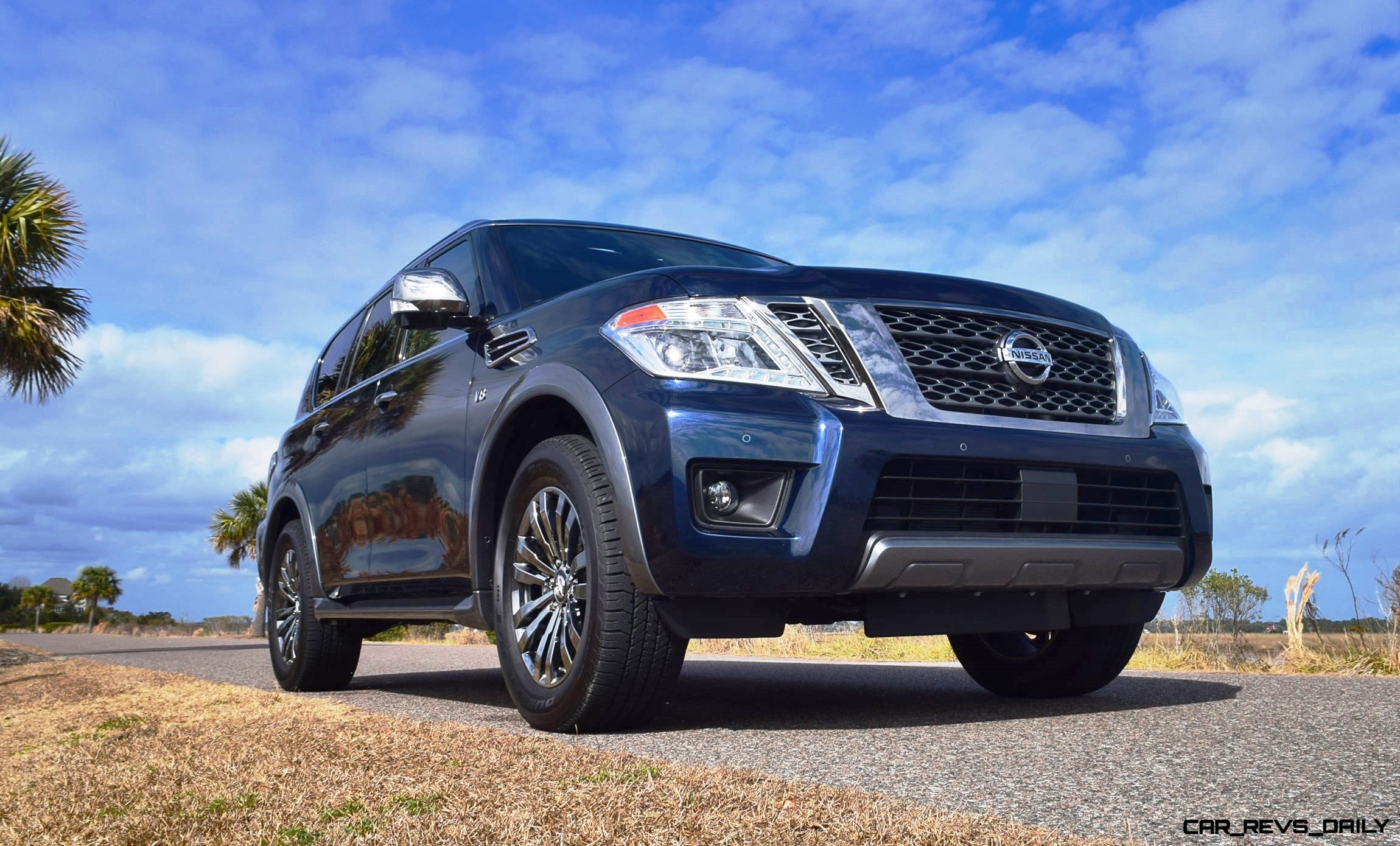 The new Nissan Armada is looking fresh and dapper — as well as huge — across the more affluent areas of the globe since 2017.

Here is a machine that shares every panel with either the Infiniti QX80 or the global Nissan Patrol variant — but still has a fresh face that has the curb appeal of any of the jumbo SUVs in 2018 and beyond.  The new LED DRL lighting style in the headlamps is fresh and standard across the board, while the two-tone paintwork with contrasting fender extensions make a nice, slarry statement.

At the end of the day this Armada is an amazing value play for SUV shoppers with pricing from $46k.  It brings the entire platform and luxury cabin refinement of the QX80 while costing a cool $25k less in some cases.  The big Armada is slightly shorter overall than the previous model but makes the most of it with this dedicated frame plus unibody chassis design.

Yes, this machine feels absolutely bomb-proof because it nearly is.  Three rows of adult seats are impressive and the space inside is enormous all around.  Especially in the second row!   Shorter length for easier garaging plus more comfy passenger space for long trips?  Win win!~

But is all that value proposition intact when you load up the new Armada to the gills with luxury equipment and new features, like the $65k pricing for the 4WD model we spent a week enjoying?

We vote a solid yes — for the exact same reasons that make the QX80 so superior to Escalade and some rivals.  We can count the number of things “cut” from the QX80 to save money on one hand.  They are literally dead clones … in the best way.

Standard headings of Exterior, Interior, Performance and Pricing for this review.

Armada and QX80 might have been accused of shameless badge engineering on this one a few decades ago.  But these days, buyers are realistic and simple nose and tail refreshes are enough to have the Armada looking new and unique (to non-car-enthusiasts especially, perhaps).  The new QX80 with its Q60 LEDs and slimline headlamps at the top corners of the hood looks deeply posh, soothing and tranquil.  Even as a machine weighing nearly three tons… it is friendly and classy versus just in-your-face massive.

The Armada’s blockier, truckier face with its giant V-motion grille bars helps this version of the machine seem purposeful and, dare we say it, utilitarian versus some fancy rivals like the Mercedes-Benz GLS or Audi Q7.  Armada is easily 120% the size of those trucks, for one, and even feels taller and wider than some Tahoes these days.

Armada seems to say “we need this truck to move our giant family” in the same way Expedition and Suburban do for Ford and Chevy.  Yes, it is huge and the most luxurious Nissan ever made.. but this is a truck bought for Need more than Want.

How can all that chrome and new LED headlights convey all this?  The nose sets the tone, but the two-tone paint and sexy, trendy black chrome available for the wheels and trims on this Platinum Reserve seeks to bump the Armada back into the luxury universe nicely.

Armada’s most brilliant element might be realizing that often the shoppers above are the same people, or at least living happily in the same neighborhood.

The cabin of the Armada at this flagship spec is virtually identical to its luxury sibling from Infiniti.  The only tweaks are to the stitching of the leather and the finishes of the wood accents.  That is the entiretey of the changes and as a result, this big beast is silent and insulated in a way that Tahoe’s and Expedition’s can only dream about.

Seriously hushed at all times and seriously smooth too.  The ride of the Armada is slightly cushier than the QX80 as the Armada drops the adaptive suspension setup and therefore sticks with a marshmellowy smoothness for all modes.

This does create a bit more body lean than the QX80 around speedy corners but is unlikely to be a demerit over rutted and choppy gravel roads or around town over potholes. Still nowhere near the body lean and dive/squat experienced by the Land Cruiser — which is easily the cushiest SUV ride in the world.  Armada splits the difference between the harshness of the domestic full-size SUVs and the flinty impact harshness of the largest German SUVs.

One of the coolest functional tweaks to the tech inside lives in the video rear-view mirror.  This feature gives much, much more clarity on what is behind the giant Armada and especially in its blind spots.  Of course, blind spot monitors and all the lastest active cruise are fully integrated and very easy to use.

These two bits of new tech join legacy systems for the gauge displays and the navigation/audio/info display.  Controls for this are slightly yestertech but are deeply simple to use in a set-and-forget kind of way.

The Armada sacrifices nothing to the QX80 mechanically, aside from being down ten horsepower and taking regular gasoline versus premium in the Infiniti.  Same lovely V8 roar on hard throttle and same seven-speed automatic as the QX80.  It is worth noting that QX80 has ran this powertrain for five years now… so it is not quite cutting-edge in terms of fuel efficiency.

There are advantages to having such a proven drivetrain — both from a reliability standpoint and for the sheet torque this machine has available at any revs, any time.  One demerit of the V6TT in the new Expedition is that it does suffer from turbo lag off the line.  No such issues with Armada — and this beast definitely feels up to the task of hauling the biggest boats and trailers.

The Nissan brings not just lower entry prices but easier servicing with more dealerships and less lifetime running costs thanks to the standard V8 chugging normal octane gas versus the Infiniti’s taste for premium.

A relatively fresh style means the Armada rarely feels like a hand-me-down.  And on numerous objective measures like build quality, chassis rigidity/strength, ride comfort and refinement the Armada tops its mainstream rivals easily.  Giving up nothing in luxury or size… but pricing that even undercuts top Suburbans?

The Armada is ready to set sail!