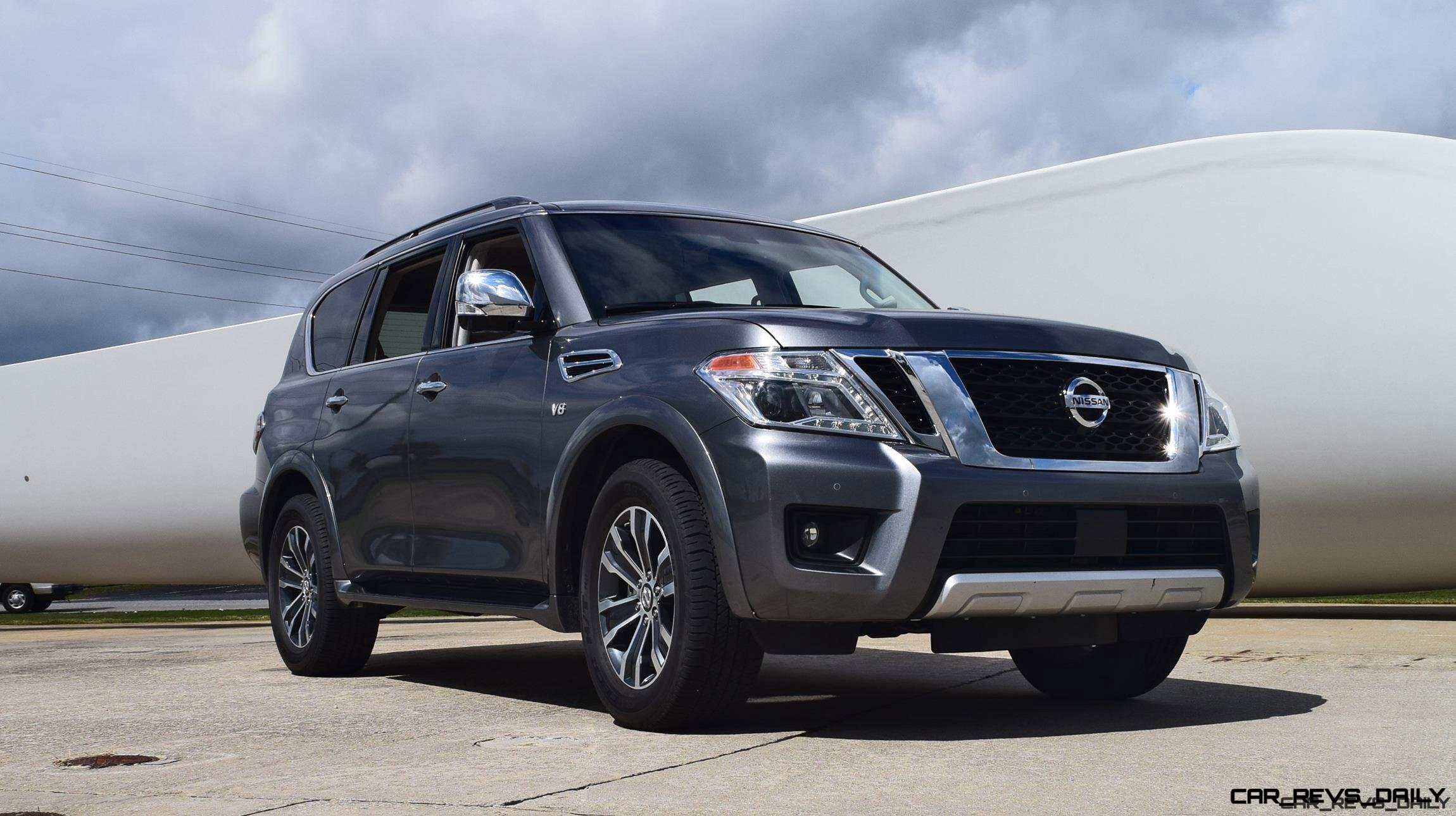 When Nissan announced the details of the 2017 Armada, we were confused but optimistic.  Optimistic because this is indeed a huge upgrade versus the outgoing model, but confused because it appeared virtually identical to the Infiniti QX80.

Nissan has sold their version of the QX80 globally for a few years now under the Patrol badge.  But it is only very-slightly cheaper than the QX80 proper in most markets.  That is how close these two platform-mates are.  The last QX80 we tested, mind you, cost close to $100k with its Limited package.  And it is still supremely competitive with the latest Navigator, Escalade and even the Range Rovers and GLS Mercedes-Benzes of the world.

If Nissan could get the price to compete with the Expedition and Tahoe mainstream models, then they would have quite a competent machine on their lots for big, outdoorsy families.

So when the 2017 Armada arrived out front, we had to check its spec sheet and pricing right away.  And what we found was all good news: the price is down to a starting point from just $45k, and the specs are almost identical to that super-premium QX80.

This is great news for buyers. Why?  The Armada’s siblings already paid for the engineering efforts.  The Armada is now seriously affordable and seriously good — from all eight seats.

Despite sharing the glasshouse and doors of the QX80, this updated Armada is actually pretty fresh from all sides.  Size-wise, the new model looks far smaller than the outgoing Armada, but this is an optical illusion.  It is actually an inch longer and about two inches taller than before.  The scale of the vehicle splits the difference between the Tahoe and the Suburban, by the way.

Our gunmetal grey model’s fender flares match the main bodywork — but all the other colors wear these same dark grey wings. It definitely looks fresh as a result, even in profile.  Subtle changes like the side hood vent in the Armada are slightly dressed-down versus the QX80.

From the nose and tail, the Armada is quite different from the QX80.  The V-motion grille is now as gigantic and mirror-like in its bright chrome as the Titan and Pathfinder.  New bumper shaping down below and contrast-color for the front chin-plate of the bumper also feels pretty fresh.  The headlights are the dead giveaway that this is not the Infiniti: they wear unique boxed LED DRLs to wrap the HID projector beams for the main lights.

Out back, also quite fresh!  Horizontal rectangular LED brakelights feel current and premium, while the lower bumper also has more shaping and a swirl effect to its surface that slims the look of the truck notably.

Overall, then, the 2017 Armada really leverages the upmarket cache of the QX80, but with a new twist that’s clear on closer inspection.  In terms of downgrades versus the QX80, we lose the HID highbeams, LED foglamps and cornering functionality for the low-beams.  Very minor changes, then, and one that few will notice or mind when cross-shopping the Tahoe or Expedition.  The Armada is still a premium entry versus those fairly humble trucks — neither of which come with even HID lowbeams.  This is not just vanity — the Armada as it stands might not light the road ahead as well as the QX80, but does so far better than its mainstream rivals.

The cabin of the Armada is in another world from its predecessor.  Rigidity is through the roof objectively versus before, and feels easily 3X as strong as the old model.  Much wider boxed frame rails are to thank for this advancement.  The stiffer chassis actually lets the suspension be calmer and softer than ever before, without compromising capability in the slightest.

Same for refinement and road noise.  The new Armada is just like the QX80 in its supreme isolation on the road from wind, tire and road noise.  Even the massively more powerful engine is radically hushed versus before.

This is all great news.  We were still on the prowl playing “find the difference” versus the Infiniti in the first few drives.  But after finding less than a handful of changes, we simply realized the QX80’s cabin luxury came over almost untouched.  Slightly shinier wood than the open-pore grains in the QX80 Limited are notable, as is the truckier steering wheel design.  But what else?

The dash is still leather-wrapped and the seating surfaces are still buttery-soft.  The power controls for the seats seem identical too…

The Armada SL test truck is the midspec model between the SV and the top Platinum.  As such, the moonroof is an $800 option and the Tech package another $1700 to include full-speed active cruise, forward emergency braking, blind-spot monitoring and rear collision intervention.  The AroundView monitor is a huge asset in a machine this large, as are its upsized mirrors.

The Armada seats eight with a second-row ‘bench’ versus the top QX80’s captains chairs.  It is enormous inside this truck, with that bench in the second row actually three unique seats with adjustable recline and easy-access flip/fold to ease entry to the third row.

This wayback seat is far comfier than before. The same ultra-stuffed leather thrones for that seat mean it’s no longer a bumpy and rude experience to ride in the third row.

With all the seats folded down, we had no trouble loading massive furniture during an in-town move.  Almost no truck better than the Armada for that purpose!  The smoother two-channel gas shocks and four-wheel independent suspension make this truck an ultra creamy and comfy way to travel.

Two huge advancements in the Armada versus its predecessor help the truck stand proud in 2017 and beyond.  The first: smoothness.  The second: power.

The new Armada is indeed a soft and comfy ride.  We were amazed at how well the Armada handled both big and small bumps in the road.  Around town, the Armada is easily much softer than any Ford or Chevy full-size SUV, and even bests the Denali and Escalade in this regard.  There is simply none of the giant impact harshness that comes with all the GM SUVs, even the Escalade.  It almost floats over imperfections in the road surface like it rides on air springs.  In fact, just comfy tuning to this premium-level chassis.

Yet it still has a gigantic payload rating and can tow 8500 pounds?!

The new Armada is down 10 ponies versus the QX80: 400 plays 390 in the Nissan.  But the Nissan runs on regular gas versus premium in the Infiniti.

390 is up 63 horses versus the 317 in the previous generation.  This engine is also at least 2X as smooth on throttle.

A seven-speed automatic is perfectly matched to the engine’s power curves, and rockets the giant truck off the line in a pretty intense way.  Short ratios down low, then, but also a nice cruising gear on top to keep the revs ultra low at an 80-mph cruise.

For family drivers, it is a double win with so much refinement and power on tap.  The Armada does not have the optional active-rollbar suspension like the top QX80s, and as such is slightly less confident being driven quickly around corners.  The Armada basically prioritizes smoothness and hauling strength versus being nimble at lower speeds.  This seems logical — as its ride quality is what really sets the Armada above the Tahoe/Suburban and Expedition.

Fairly slow steering response fits in with the limo-truck mission nicely, even if it didn’t exactly encourage the type of frisky driving we usually enjoy.

In all, the new Armada is now a first-class seat for every family member — without sacrificing the space and hauling that is a must-have for buyers.

Pricing was the big question for the Armada when it arrived.  In fact, the Armada’s pricing was not even set on the window sticker of our tester.  A trip over to Nissanusa.com confirms the impossible, though.

Is the Armada almost too good to be true?  Aside from not loving quick corners, it really is.  And really, is sporty handling required in this market?  No, no it is not.

Drive any Denali or Expedition back-to-back with this truck and you will agree: the Armada is excellent.  In one fell swoop, Nissan has gone from being an also-ran in the jumbo SUV segment to a class-leader.

So what if its core elements have been on sale for a few years as the QX80 Infiniti flagship?  When that core is this good, and priced with a steep, $20k discount at minimum… who cares?

New owners can just give a knowing wink/smile as they pass QX80s on the road — knowing that those other drivers underwrote the development of this ultra-posh eight-seater.

For owners, the 2017 Armada simply represents a next-gen upgrade. One that shades the Suburban, Expedition or Sequoia with its smooth ride, silent cabin and potent powertrain.