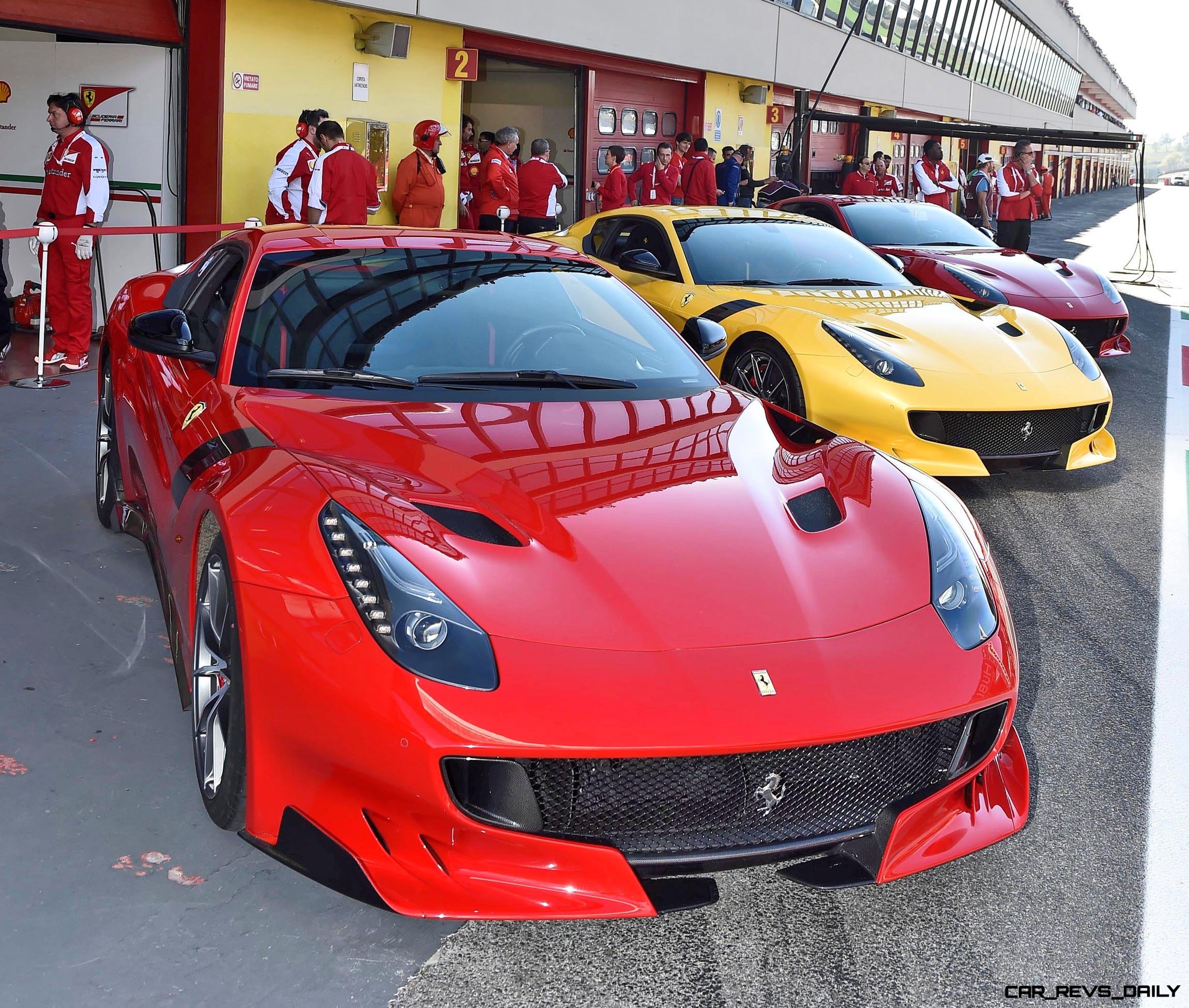 Ferrari just wrapped up its weeklong extravaganza for the World Finals of the Ferrari Challenge one-make race series  — and crowned the huge week by debuting the new F12TdF in front of the packed crowd of 50,000-plus tifosi at Mugello circuit.

The new F12 Tour de France special model wears new aero, extra power and track-optimized handling settings. This makes running around the ultra-quick circuit with 599XXs, FXX K’s and even F1 cars a natural habit for the limited-run 2016 model — despite the F12 TdF being street-legal worldwide.

In real-life photos, the F12TdF is quite striking, with design elements unseen so far elsewhere in the Ferrari range, plus a style with flowing lines and sliced alloy ventwork that recalls all-time heroes like the 1956 250 GTB.

Ferrari also debuted the next-gen racing 488 GTB, with GT3/Ferrari Challenge and WEC GTE variants unsheathed for the first time.  The GTE car is confirmed for LeMans 2016, making this racing Ferrari quite important in winning a rekindled rivalry with Ford around the LeSarthe circuit in France next Spring. Scarperia, 8 November – Record closing day for the Finali Mondiali [World Finals] at the Mugello circuit. On the final day, as many as 50,000 spectators crowded the installation owned by Ferrari. The most anticipated event was the exhibition of the Scuderia Ferrari and its official drivers, but much more was on display at the track.

Challenge world titles. The day opened with the races valid for the attribution of the Ferrari Challenge world title. The winners were three drivers from the European series, probably also due to the fact that they are accustomed to racing at the Mugello: the Coppa Shell went to the experienced Erich Prinoth, Matteo “Babalus” Santoponte triumphed in the Trofeo Pirelli and the Pirelli Am title went to Alessandro Vezzoni.

The exhibition. The great exhibition on the track started at 12:45 p.m. The brand new F12tdf series opened the exhibition hour. This car pays tribute to the famous Tour de France Automobile; it is produced in 799 units and is equipped with a V12 engines with a power of 780 HP. Three examples of the car went onto the track: Kimi Raikkonen and Esteban Gutierrez accompanied respectively the managing director Amedeo Felisa and the vice-president Piero Ferrari on two red cars while the president Sergio Marchionne was Sebastian Vettel’s passenger on the yellow car with which the model was launched.

GT moment. Following this, the 458 Italia GTE and GT3 competing in the World Endurance Championship (WEC) and in the main national and international GT championships went on the track. Toni Vilander and Giancarlo Fisichella alternated on car number 51 while the regular drivers James Calado and Davide Rigon took turns on car number 71. Olivier Beretta drove the GT3. Then it was the turn of the 488, a car just introduced which will be racing in the GTE version during the 2016 WEC and in the GT3 version in the great majority of the GT championships. Andrea Bertolini, who looked after the tests, was at the wheel of the GT3, while “Gimmi” Bruni, who is increasingly becoming the face of Ferrari in the GT competitions, was on board the 488 GTE.