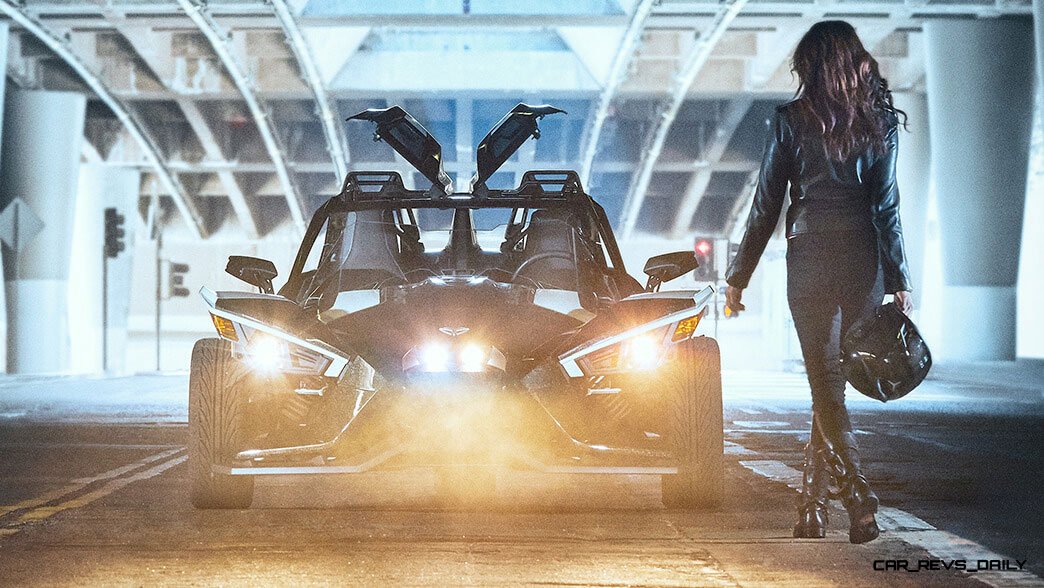 The Polaris Slingshot has certainly made waves since it was first unleashed on the world several years ago. It has done a good job turning heads wherever it goes, and has even played a role in revamping existing legislation on motorcycle licensing in many states (This author’s home state of Michigan included.) But are you the type of enthusiast that desires more comfort, technology, and a dash more practicality? If so, Polaris has the perfect Slingshot for you.

Dubbed the “Grand Touring” this special Slingshot is the new range topping model in the Slingshot model lineup, with the SLR trim being demoted to playing second fiddle for the 2019 model year. The exterior styling retains alot of the funky pseudo batmobile elements that made the original a smash hit with buyers. The press photos that Polaris released show the Grand Touring with its optional roof package, but look for open air enthusiasts to pitch it for a more intimate driving experience.

“Designed with comfort, style, and performance for rides that don’t end,” The Grand Touring arrives with a nice blend of equipment. This include more comfortable seats, a new wind deflector, color matching rear fender, and 20-inch front aluminum wheels with the rear wheel rocking a slightly smaller 18-inch hoop.

The biggest change here is the addition of the all new seven-inch touchscreen infotainment system with built in satellite navigation. While some of its buttons look like they were ripped out of a 90’s era GM car, the system is a game changer in the “autocycle” segment, with the Slingshot perhaps being the first offering to equip such a feature. It’s more opulent rival, the Morgan 3-Wheeler does not offer a touchscreen, and takes a decidedly minimalist approach to its dashboard layout.

All trim levels feature electronic power assisted steering, electronic stability control, and ABS equipped disc brakes for 2019. The 2.4 liter GM sourced Ecotec four cylinder engine carries over unchanged, which means buyers get to experience all 173 of its spirited ponies out on winding sections of tarmac. A five speed manual transmission is the sole unit available, and while rumors of the Slingshot potentially moving to a turbocharged engine have persisted in some water cooler discussions, no solid evidence has emerged, and Polaris has not issued a comment on the subject.

Polaris is however, keen on promoting the high levels of customization that comes via the company’s Slingshot Engineered Accessories guide. That includes the optional 200 watt premium audio system as well as a seven inch screen for non Grand Touring models. Look for the first examples to make their way to Polaris showrooms later this year.