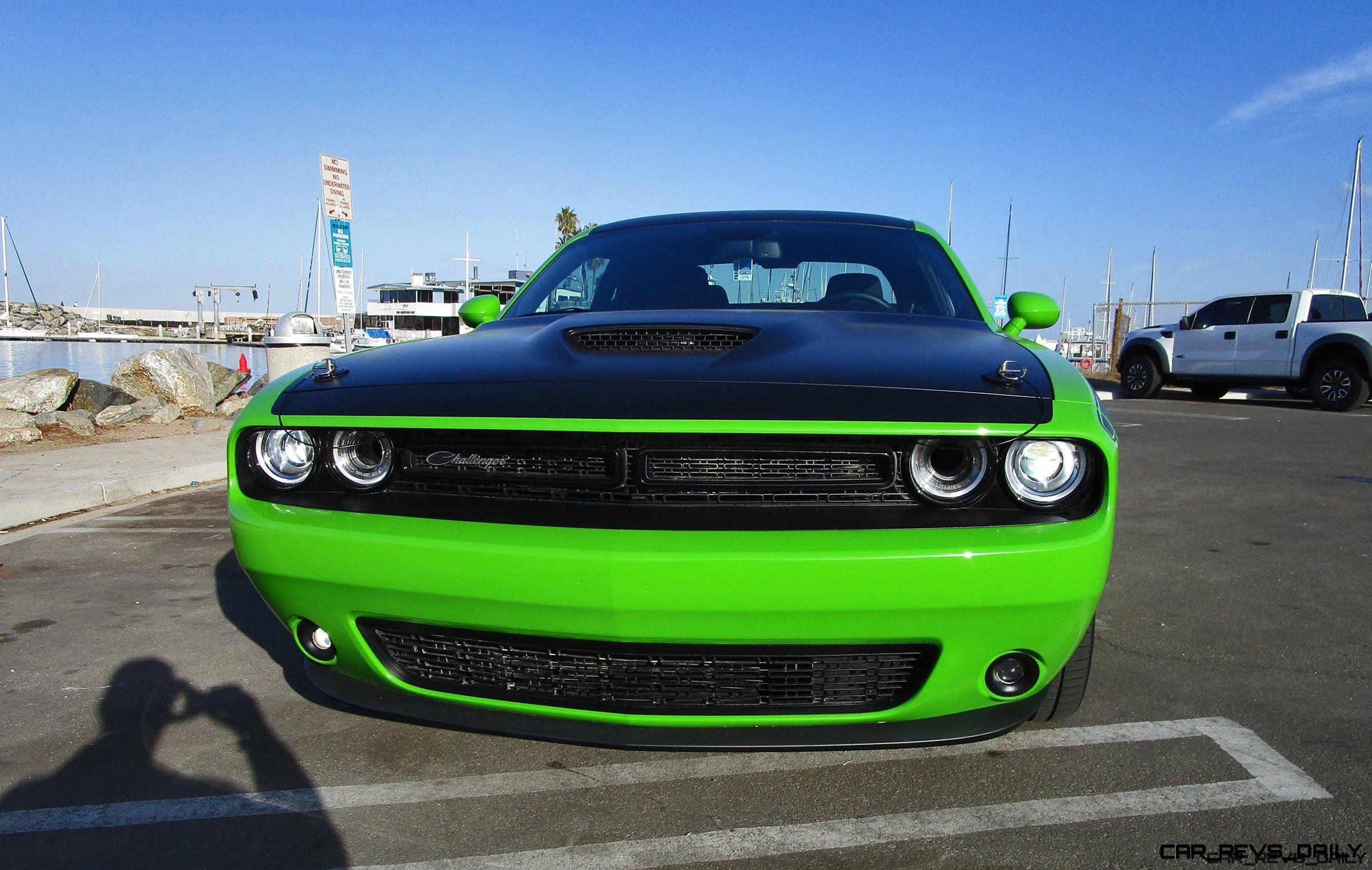 Some cars just take you back. And the 2017 Dodge Challenger is one of them. Sure, it’s loaded with modern technology and conveniences, but once you fire up that awesome Hemi V8, and just listen to it whump, whump, whump – it becomes a time machine that transports you back to when driving was almost everything you could think about.

The design is familiar, the Challenger hasn’t changed much since it was re-introduced 2008. And they were smart – the proportions, the stance, the swagger – it’s all true to the original.

Good luck trying to impartially view the Challenger. Especially when it’s tricked out like our tester in eye-searing Green Go paint.

And if that’s not enough, ours had the T/A package, that includes such wickedness as a black satin hood, roof and trunk lid, T/A Grabber hood, body side graphics, black grille and spoiler, and 20-inch black forged alloy wheels. The cherry on top of the sundae –hood pins to keep that hemi under wraps.

If we had a Challenger in high school, we would’ve have wanted it to look just like this.

For the interior, the years have been kind to the Challenger. The inside has seen some major improvements over the years, with a major redo in 2015 that brought the design and quality of materials up to impressive standards.

This is a modern interpretation of a muscle car, and it’s a good one. The cockpit hugs the driver with serious intent, there’s large and slightly retro-looking speedo and tach, flanking a 7-inch programmable Driver Information Digital Cluster Display. With the retro typeface crammed onto the 160-mph speedometer, we kept the digital speedometer display on to keep us honest.

In the center is Dodge’s 8.4-inch U-Connect touchscreen infotainment system, and it’s a model of simplicity and legibility, and has the logic of a tablet. Quick and easy to use – perfect.

The touchpoints are another example of job done right, with a fat leather-wrapped steering wheel and chunky shift lever. Funny thing though, as soon as you get in, you drop the window, park your left elbow on the sill and rest the wrist of your right hand over the top of the wheel. Classic cruising style – somehow Dodge knows how to program that in the car’s DNA. And it just takes you back in time even more.

And if you’re going to bring some friends along for some muscle car memories, the Challenger’s the one. The front seats are large, big well shaped buckets that are cosseting, holding you in place but roomy and comfortable. And the rear seat is adult-friendly too – something that Camaro and Mustang owners will never get to know.

If you’re really worried about rear seat room, you can get a 4-Door Charger with a Hemi – but what High Schooler ever wanted a 4-door?

We didn’t feel deprived, though, along with 375 hp and 410 lb-feet of torque, our tester had the T/A’s air grabber hood and cold air intake system – we’re guessing there’s more power there than advertised. Pumping through the active exhaust – it goes from loud, but not obnoxious, to “back-off-buddy”, and swapping cogs through our tester’s 8-speed automatic (of course, a stick is available) you’re easily in the meat of the powerband all the time, and it’s a big New York Strip of juicy power.

Press the Super Track Pak button, and you get Dodge’s performance page displays on the center console, that lets you adjust launch control rpm, steering and transmission response in your choice of Comfort, Sport or Track flavors.

Even if you don’t hit the track – or drag strip – you’ll get plenty of enjoyment on the streets with Super Track Pak’s performance-tuned steering and suspension, 20-inch hyper black aluminum wheels shod in performance tires, paddle shifters, and a 3-mode stability control system that can be completely deactivated. It even includes a Rear Back up Camera – a real plus with the Challenger’s small greenhouse and high rear end.

It’s a nice suspension package that gives responsive handling with a controlled ride that won’t beat you to death. And while it’s the best handling Challenger ever, it’s still a solid third compared to Camaros and Mustangs in the handling department – the Challenger feels (and is) a larger, heavier car, but easily beats them in livability.

Speaking of which, it seems like when you’re driving something as big, bodacious, and green as the Challenger T/A, you attract a lot of attention. This thing is like honey to the Camaro’s, Mustangs, tuner cars, imports, hot trucks, whatever. Everybody wants to race. Cars speed up to check you out on the freeway. Some back off, others do stuff that’s just plain stupid.

Luckily, we are not in high school anymore, and don’t feel obligated to put our lives, licenses and livelihoods on the line to prove anything.

You may want to prove your credit at the local bank though, because the T/A is one tempting proposition.

Who says you can’t buy happiness?

You can start with a sensible Challenger SXT with a nice 305 hp V6 that is nearly visually indistinguishable from a V8 R/T model, and starts at just $26, 995. Heck you can even get one with all-wheel-drive and have a muscle car that you drive year-round. Pretty cool.

Entrance into the Hemi club starts with the Challenger R/T at $32,995. Looks, style, the deep hemi burble, sounds like a bargain to us.