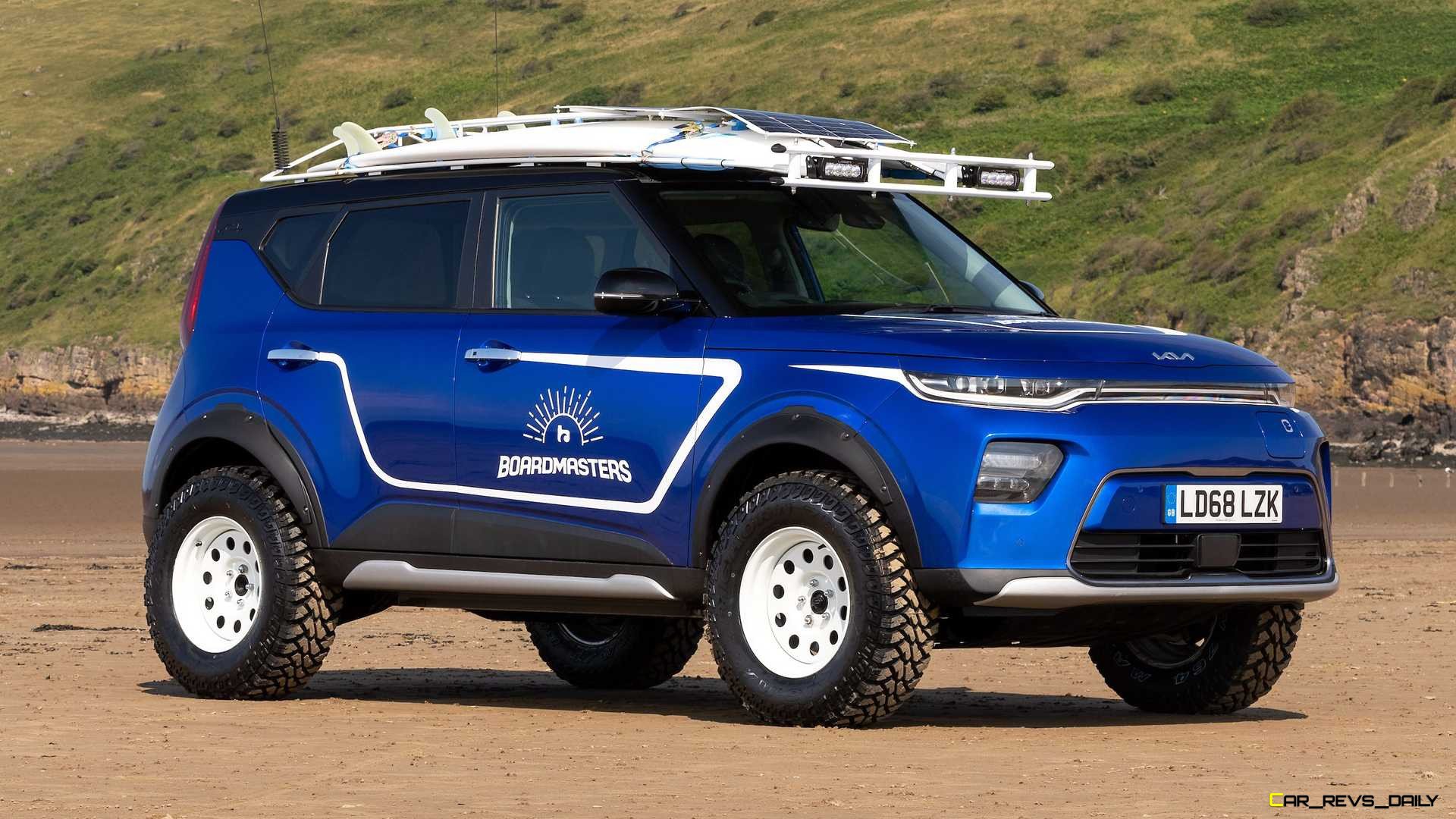 Remember back when dune buggies and other beach-focused rides dominated the coastlines and beaches of the world? While the 1960s may be long gone, Kia wanted to try and channel some of these vibes into a vehicle that could not only be at home on the beach but also have the ability to plug in and charge. I thas done so with the Soul Boardmasters Edition, which will help organizers of the 2021 Boardmasters surfing competition in Cornwall, England. 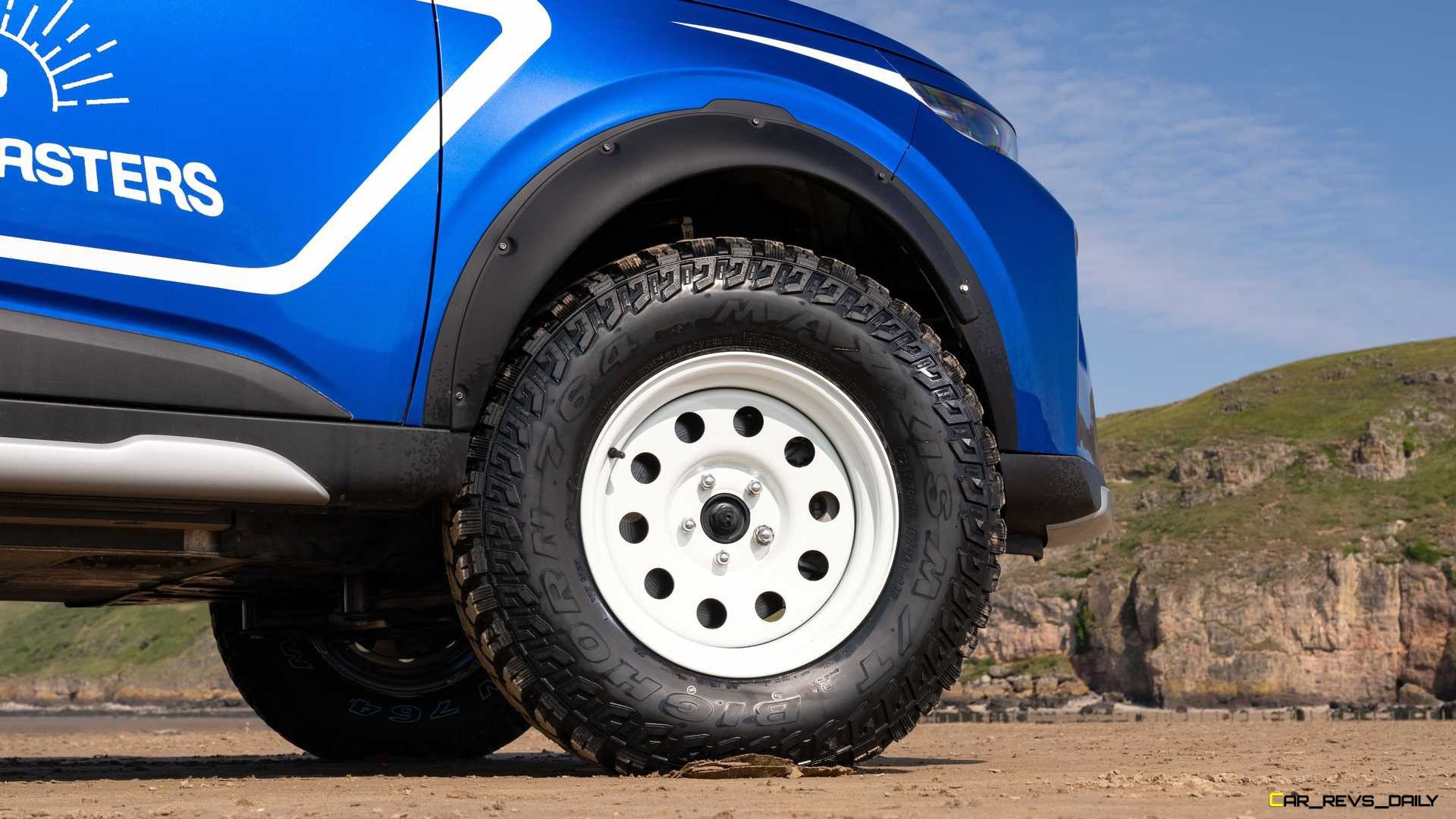 An immediate change that buyers will notice when they look at the concept is the rugged modifications that this particular Soul received to help it cope with sandy terrain. A stock Soul EV is designed purely for the urban jungle, and engineers had to make some extensive modifications to help it be beach-ready. That included a 3.0-inch suspension lift and meaty 30-inch Maxxis Bighorn sand tires, with the components also forcing the Soul’s front and rear track to be widened slightly to accommodate it all. A set of bleach-white 16-inch steel wheels help add some class and poise to the Soul and also allows it to better withstand divots and holes. 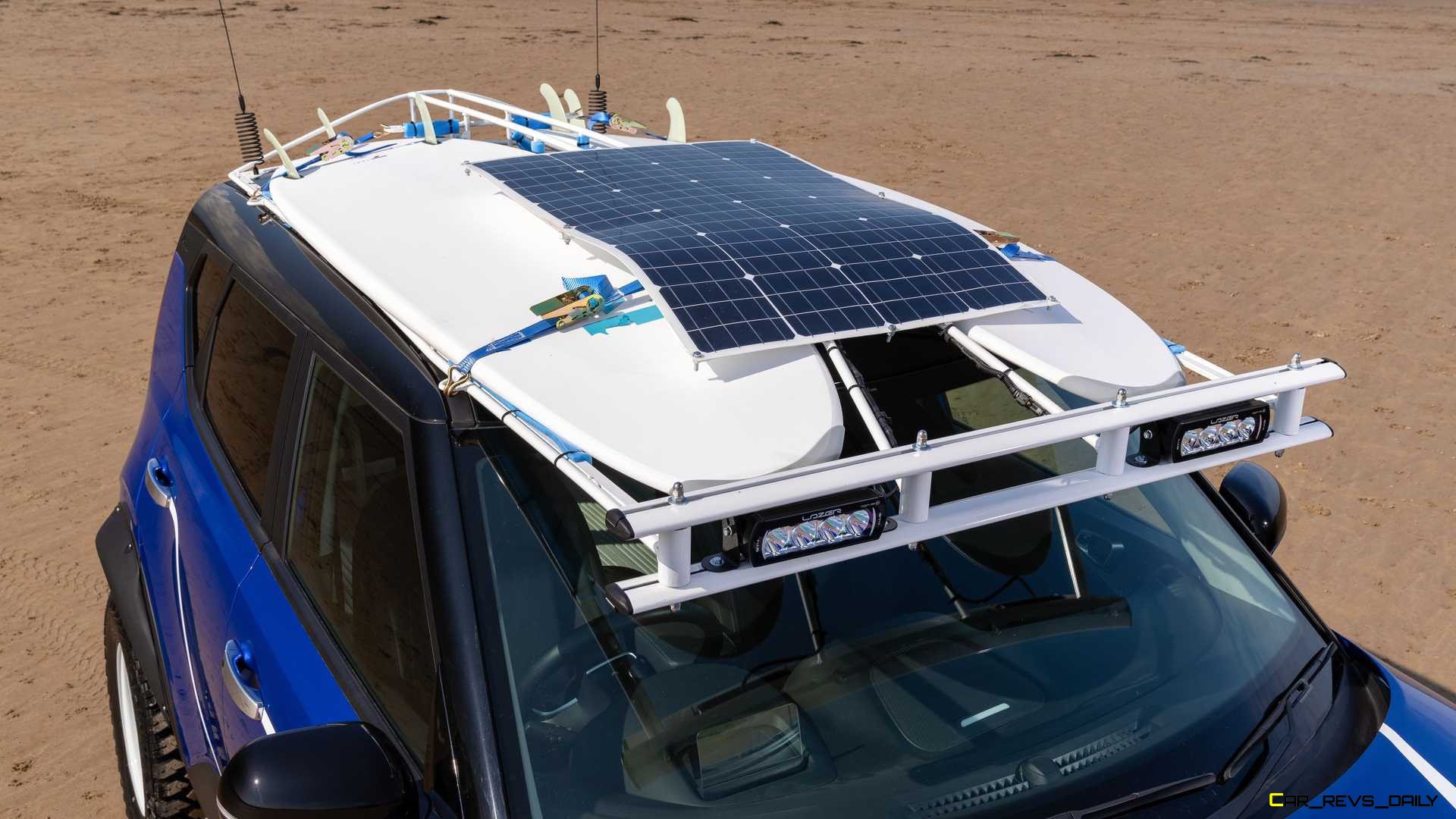 The roof has been equipped with a tube-style steel rack that can hold up to two Tahe Bic Malibu surfboards. The rack also houses solar panels that allow occupants to not use the EV’s main battery pack to power mobile devices and other electronic accessories. Kia did not release any range estimates for the concept but did confirm that the powertrain is unchanged from stock which means it still makes 201 hp and 293 lb-ft of torque. While the Korean car giant claims that this is because it’s a one-off custom, we suspect that the heavier weight of the add-ons helps the Neptune Blue-hued creation get less range.

Functional Interior Is Ready To Soak Up The Sun 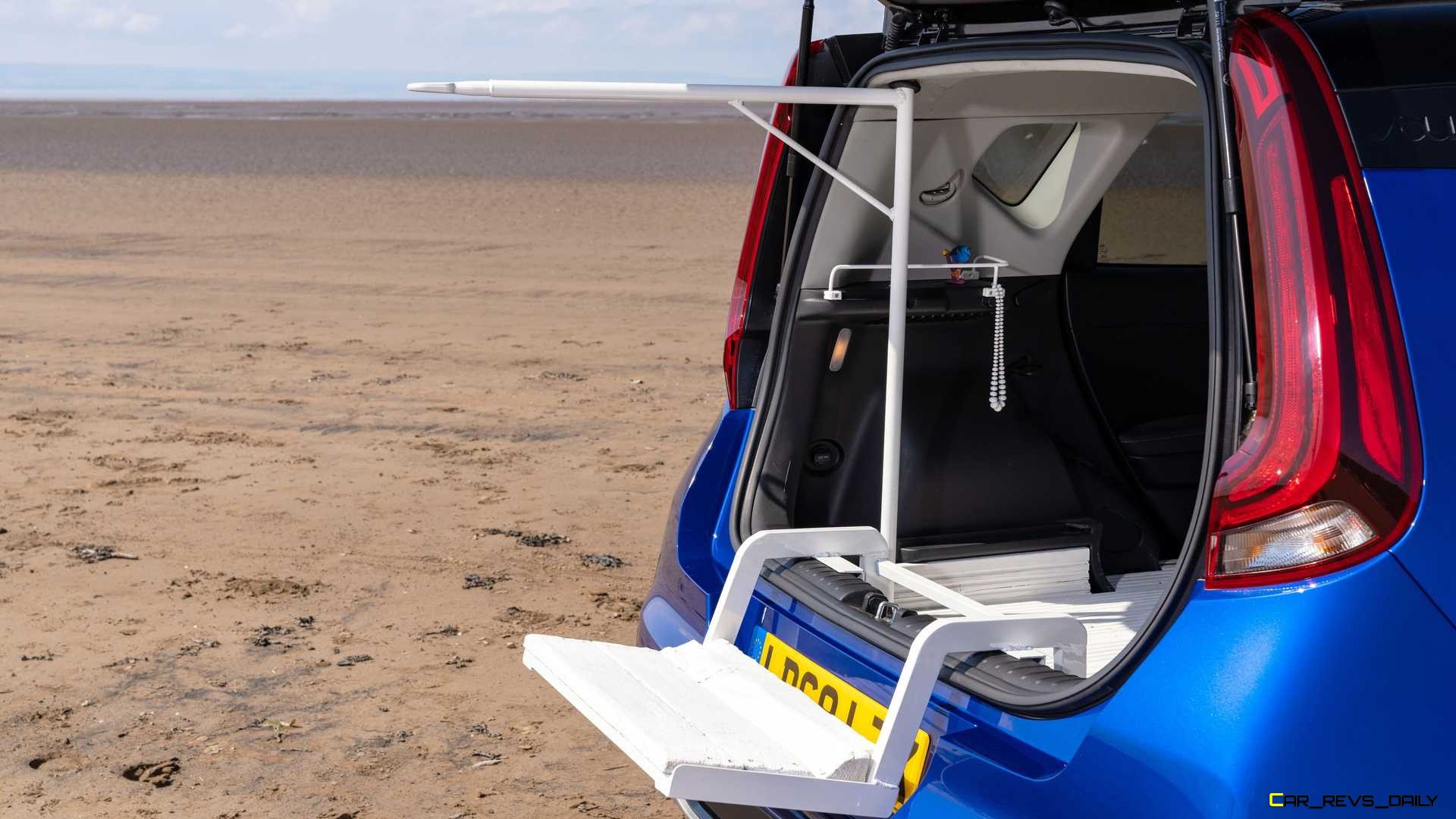 Usually, at this point, we would discuss how much room there is in the back for passengers, but here in this, Soul engineers ripped out the rear seats and maximized the amount of available cargo space. Spruce wood decking is added to help give the concept a nautical theme, while a fold-out rear bench makes the Soul a great place for a tailgate party. 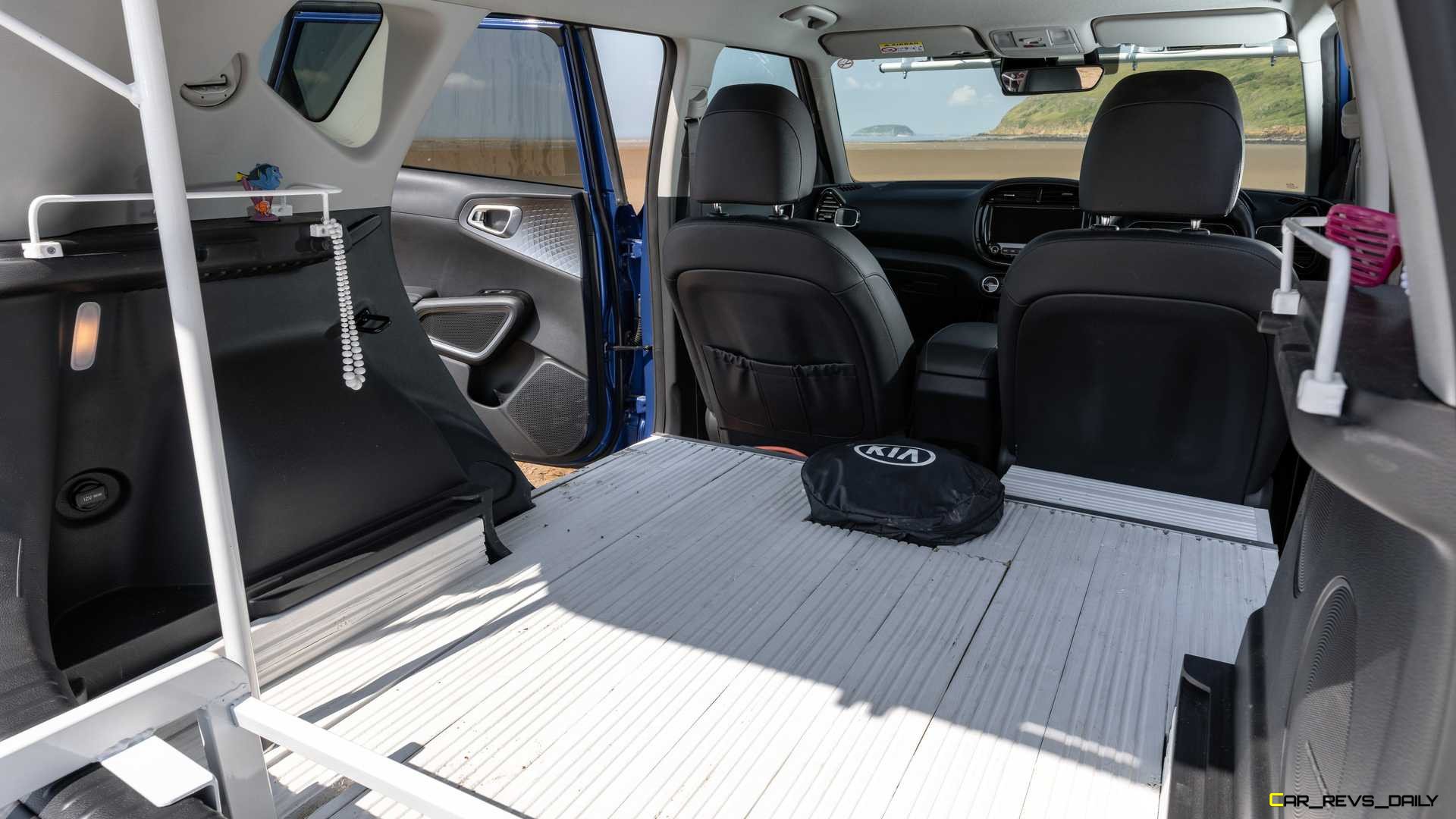 A separate swing-out arm helps the concept do double duty, with the contraption not only serving as a convenient place for wetsuits to dry but also as a handy changing area for those looking to change their clothes. But while the rear of the concept is a party, the front half is strictly business, with this area retaining the standard model’s equipment. That includes a 10.25-inch touchscreen infotainment system, the 10-speaker Harmon & Kardon audio system, as well as some of the core interior design elements.

As mentioned, this is currently a one-off concept. Still, there’s a slight chance that select elements of the rig (i.e., the slick paint) could eventually make their way to production Soul models to help give the spunky crossover more designer chic while also luring in more youth buyers that want a higher degree of distinction and creativity in their urban hauler.