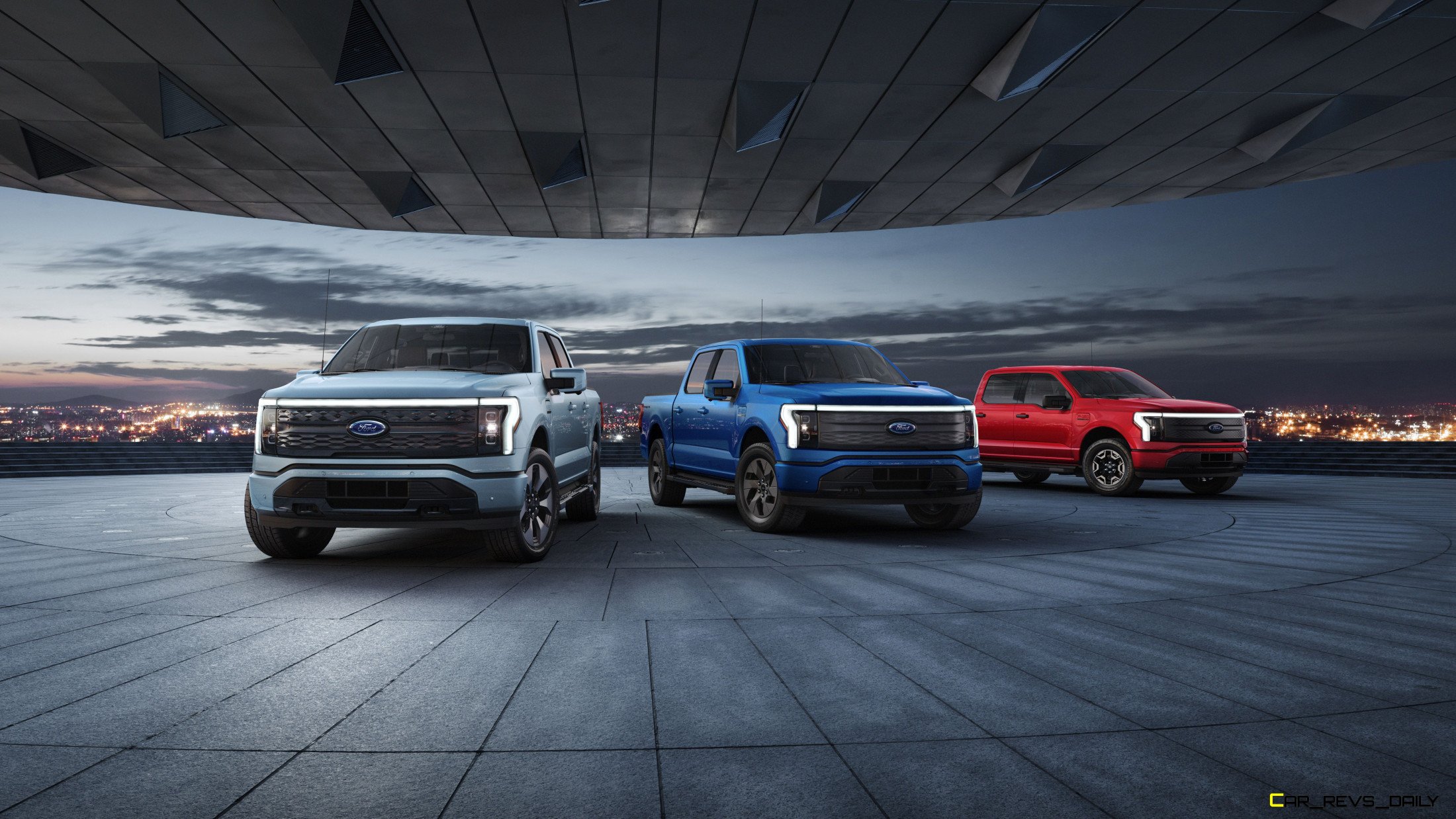 The Ford F-Series lineup has been America’s best-selling pickup for 44 years (F-150 Lightning, too) and has also served as an engineering benchmark for the segment as a whole. But while the F-150 has truly gone into some very interesting directions in its attempts to maintain its sales dominance, the one frontier that the F-150 has never ventured into is the world of pure EVs. While the recently launched F-150 hybrid is a good stepping stone for the model, entries like the Tesla Cybertruck and the Rivian R1T prove that EV pickups could be a profitable venture for companies. Ford has prepared for this new frontier with its most radical F-150 model yet, the revived 2022 F-150 Lightning.

When you first look at the design of the 2022 F-150 Lightning, the thing that might catch your attention right away is just how conventional-looking the truck is. With the Cybertruck looking like a rolling doorstop and the Rivian R1T banking big on futurism, the Lightning’s conventional design elements are a breath of fresh air in the segment. The basic profile is pure F-150, with the goal here to help the F-150 Lightning be compatible with the same pool of accessories that can also be equipped to its gasoline-powered sibling.

But take a closer look at the details, and it becomes apparent that the Lightning forges its own path in some regards. The running boards, for example, are reshaped running boards that were designed to help reduce drag, while the reworked hood allows the truck to do a better job of slipping through the air. The front fascia is arguably where the bulk of the changes can be found, with the grille’s air intake holes being replaced by a smoothed-out textured material that helps create a distinct yet familiar look. The headlights have been reworked and now incorporate a lightbar that runs along the top of the front piece and unifies the sections together. The area where the engine used to be located is now a large frunk that has 400 liters of space and can house up to 400 lbs. The space is water-resistant and comes equipped with four electrical outlets, two USB ports, and a drainable floor. This allows owners to power devices from the space and allows it to function as an impromptu cooler. 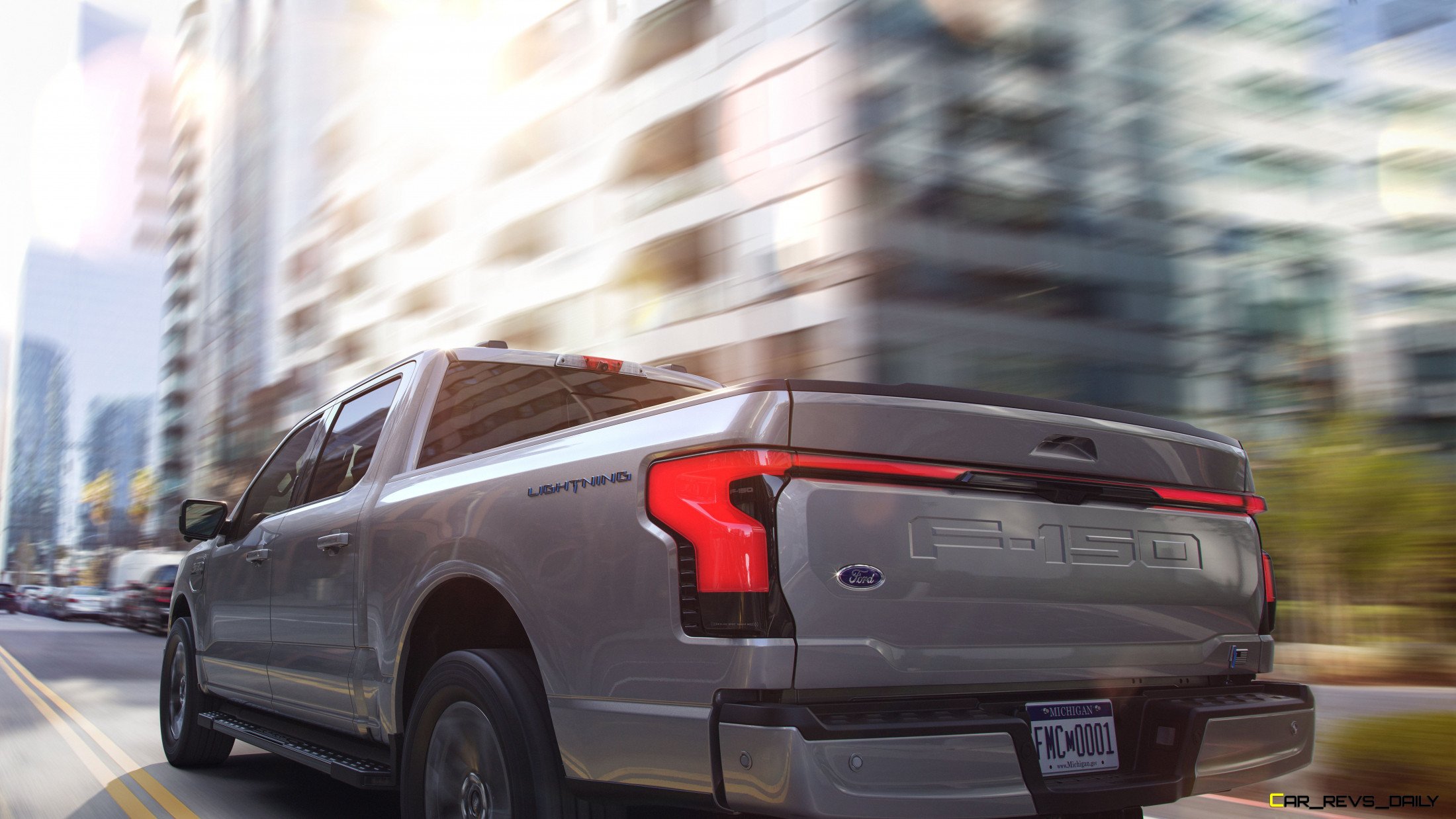 The rear styling is perhaps the least changed item on the Lightning, with the tweaks back there being limited to a tailgate-mounted rear spoiler, a lightly tweaked rear bumper to improve aerodynamics, and a light bar that joins the taillights together. We like the look overall, and while it does not quite have the magic that defined older and decidedly more aggressively performing Lightnings, we think that won’t stop buyers from checking it out and perhaps being won over by its charms.

With the exterior maintaining its similarities with other F-150s, it shouldn’t come as a surprise that the Lightning also adopts much of the core values that define the cabin. That includes the Max Recline seats that can transform into a bed and the familiar Interior Work Surface that transforms the center console into a flat working surface.

However, here too, it’s the subtle details that make the cabin stand out, and in this instance, it involves some of the technology onboard. A big change is the introduction of the SYNC 4A system, which makes its F-Series debut on the F-150 Lightning. The latest iteration of SYNC is complimented by a large 15.5-inch touchscreen that promises to bring much crispier graphics to the Lightning. Ford claims that the software is designed to adapt to driver behavior and comes packed with goodies such as natural voice control, a cloud-operated navigation system, and wireless Apple CarPlay and Android Auto. Amazon’s Alexa technology is also on board, and SYNCAppLink adds even more mobile functionality to the system as a whole.

Performance for the F-150 Lightning has come a long way from the days when V8 engines ruled the roost in older Lightnings. Instead of another large V8. This iteration of the nameplate uses an all-electric powertrain. Ford is not ready to reveal final horsepower numbers just yet. Still, company execs did confirm that they are targeting a figure of 563 hp and 775 lb-ft of torque which is more powerful than even the F-150 Raptor and easily cements the Lightning as the quickest F-Series derivative ever produced. 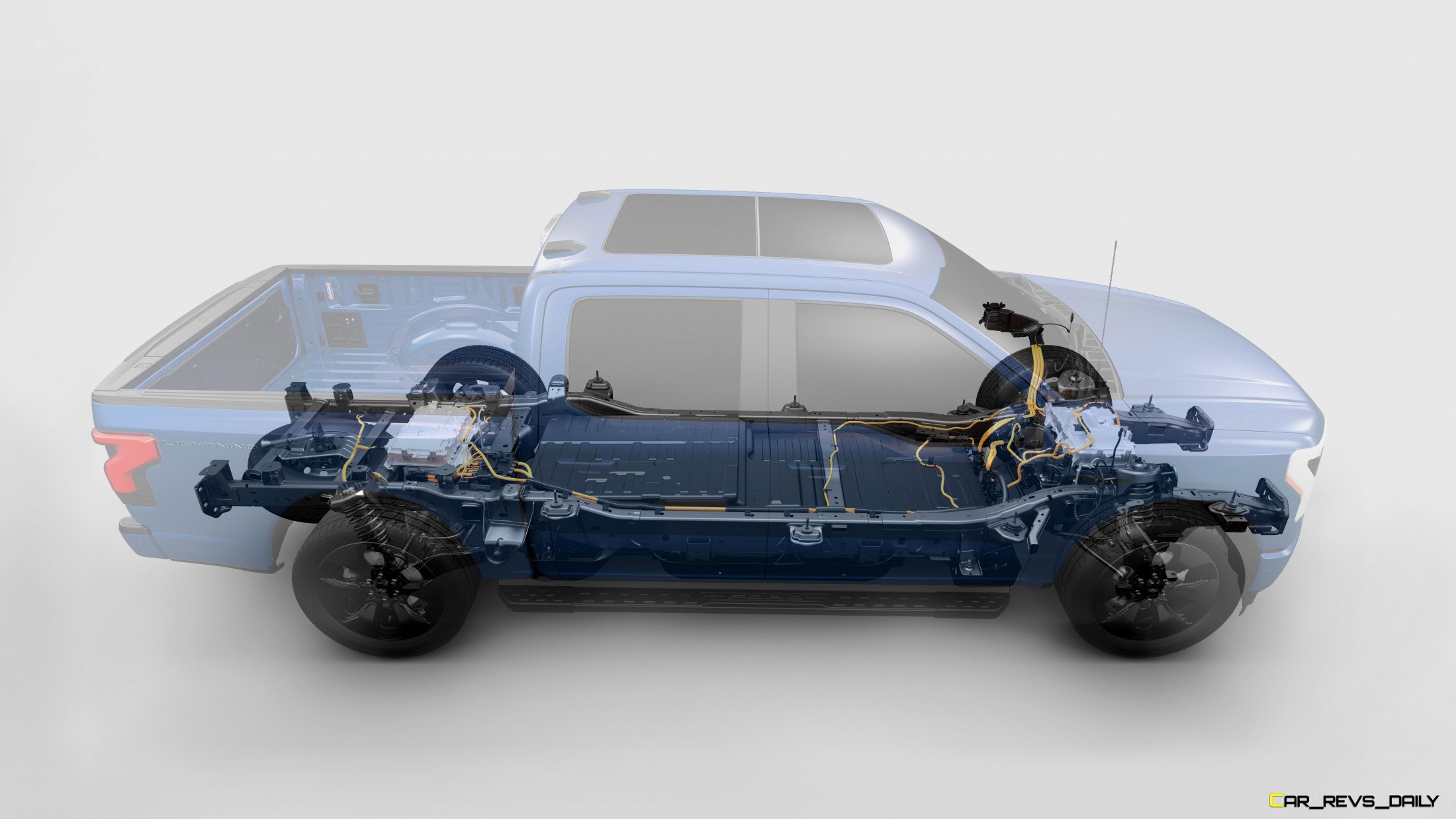 As President Joe Biden alluded to in his presidential test drive of the Lightning, all of this power makes the truck very quick. Ford claims that the Lightning will make the sprint to 60 mph in the four-second range if it’s equipped with the optional extended range battery. While these figures are very impressive, it appears that there is a price to be paid with the F-150 Lightning only being able to haul a mere 2,000 lbs of cargo. Things do take a turn for the better when you look at its towing prowess, with Ford reps boasting that the truck can tow up to 10,000 lbs (a lofty figure for an EV pickup.) As a bonus, the Lightning can go up to 300 miles before it needs a charge.

“The F-150 Lightning is a massive moment for our Ford team. America’s No. 1 auto brand is going zero emissions with America’s favorite vehicle. It’s quicker than a Raptor, with standard 4×4 and independent rear suspension, a power frunk, enough juice to run your house for three days or power an awesome tailgate, and it will forever improve with over-the-air updates,” said Ford President and CEO Jim Farley. “It will be built at the Rouge factory, where Henry Ford changed the world and my grandfather punched in every day. F-150 Lightning represents all that our country can do when we push for progress.”

The versatility on hand here is even more evident with the addition of the Onboard Scales system. Recently announced for gasoline-equipped F-150s, this system carries over mostly unchanged to the Lightning with special sensors keeping track of how much cargo is in the bed and telling customers how much either through the screen or via lighted indicators in the taillights. With this increased weight affecting the driving range, the Lightning stands out by adding an all-new Intelligent Range system that provides an accurate estimate of the available range on hand when the truck is tasked with hauling heavy loads.

The F-150 Lightning also benefits from Ford’s all-new BlueCruise system. The Dearborn automaker’s response to GM’s Super Cruise, BlueCruise uses Ford’s Co-Pilot360 software to help create a hands-free driving experience on up to 100,000 miles of pre-mapped roadway in both the U.S. and Canada. The technology here is still in its infancy, but Ford claims that more pre-mapped areas will be added in future vehicle updates.

One final feature worth mentioning is the all-new Intelligent Backup Power system. This feature transforms the Lightning into a giant generator, with the truck being able to send up to 9.6 kW of power into your home. This helps keep the lights on during an outage, and the truck can actually power multiple appliances and other home systems. As a bonus, the truck can even kick on the minute the main power goes out if the proper charging hardware is installed into your home’s circuitry.

The crowning achievement here is not so much its performance, but rather the fact that Ford managed to give the F-150 Lightning pricing that’s not too far off from its gas-powered siblings. A base Lightning starts at $39,974, while the volume-focused XLT model starts at $52,974, with that model also bringing more creature comforts and features to consumers. Unfortunately, Ford did not release pricing for the Lariat and Platinum variants, but we suspect that they will roughly be in the $50,000 to $60,000 range.

This pricing does give the F-150 an advantage over the Tesla Cybertruck and also allows the electrified F-Series truck to have a crucial head start over its domestic rivals, especially GM, which has still not formally confirmed or denied a Silverado equivalent and is launching its Ultium battery technology on the Hummer EV pickup which will initially focus on a price point that will be higher than the Lightning’s price tag.

This head start will undoubtedly give Ford time to build up a sizable lead in the EV pickup wars and also give the company valuable time to create OTA updates and other features for the truck that will be tailored towards making the F-150 Lightning a benchmark offering in this young and growing segment of the pickup market. Buyers can reserve their F-150 Lightning now, with only an initial deposit of $100 needed to start the buying process.