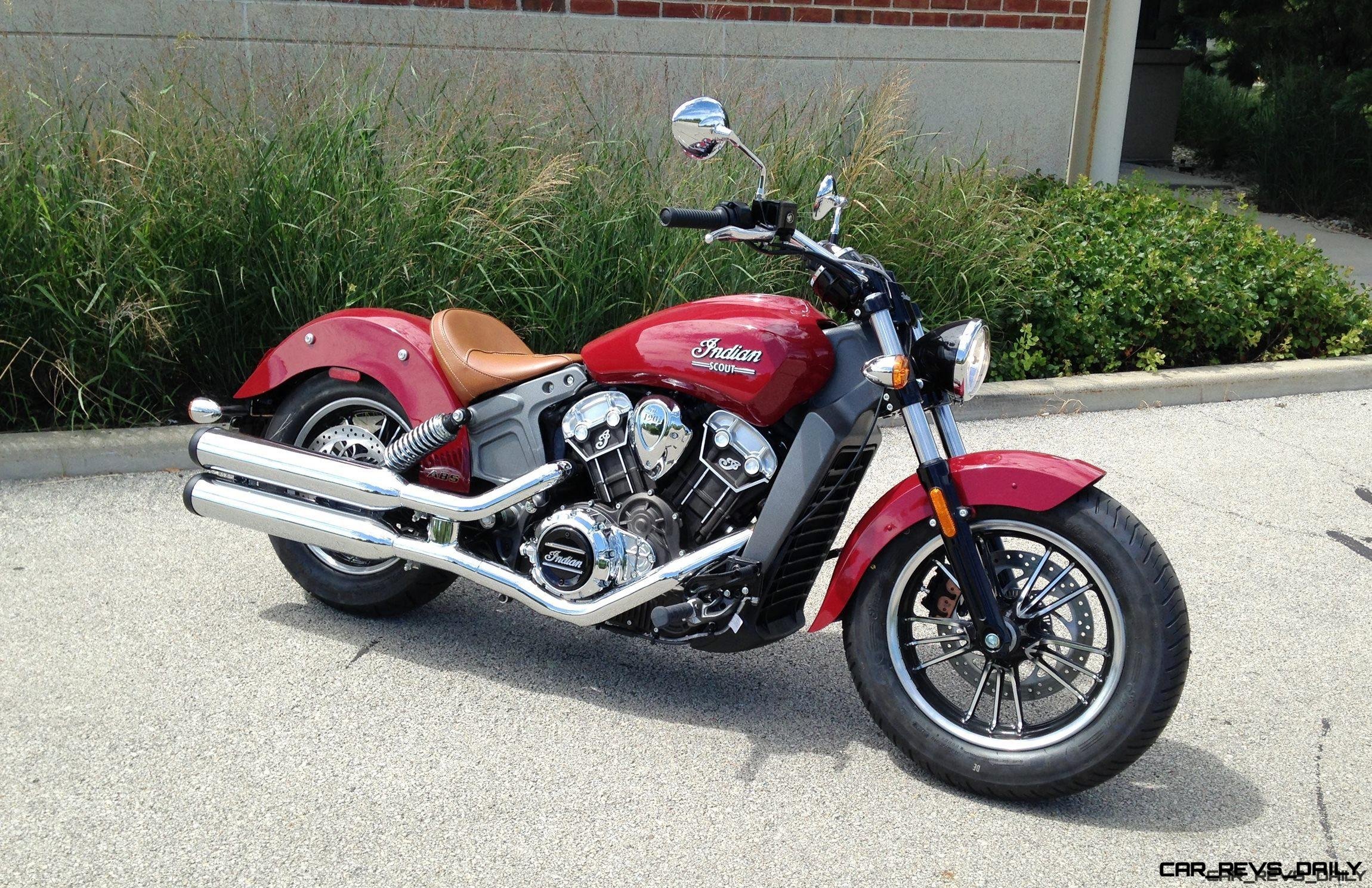 In August of 2013 Indian Motorcycles, built by Polaris Industries, in Spirit Lake Iowa, unveiled their first new motorcycle at the Sturgis rally.

The Indian Chief was a huge hit with the public, and they have introduced more Chief models since then.

All Chief models are fitted with large displacement engines and designed to go head to head with Harley-Davidson, just as they did from the early 1900’s to 1953, when Indian closed their doors.

But to truly compete with Harley today, they also needed a smaller displacement motorcycle, and the Indian Scout nameplate was resurrected.

Recently, I took a pleasant ride down to Indian Motorcycles of Monee, IL (also known as Gina’s Motorsports) to see their beautiful dealership, and they were they were happy to let me take a Scout out for a test ride.  I chose the larger 69 cu in model, since I’m more familiar with the Harley Sportster 1200, the model this one will compete against.

The 69 cu in (1133cc) engine is a liquid-cooled 60-degree V-Twin.  Indian claims 100 horsepower and 72.2 ft., lbs. of torque at 5900 rpm.  That’s more than enough grunt to make this 559 lb. (wet) motorcycle a kick to ride.  It churns out most of its torque down low, starting at about 2,400 rpm and torque curve stays pretty flat up to about 7500 rpm. The ride-by-wire throttle doles out that power smoothly and immediately, so you’ve always got a lot of punch at your right wrist, without needing to downshift.  This Scout loves to rev, and you don’t hit the redline until 8200 rpm.  The exhaust note is pleasantly roarty under acceleration, and settles down when cruising speed is reached. The counterbalanced engine never feels buzzy even near the top of the rev range, and cruising at highway speeds in 6th gear only runs the engine at about 4000 rpm, so the Scout feels calm and collected. And the mirrors are steady at any speed.  That’s a stark contrast to the Harley Sportster, where buzziness and vibrations are always part of the ride.

The gearbox works well, with each gear shifting with the cruiser-like thunk.  Clutch take- up is smooth, with moderate effort, and the Scout is easy to launch. Finding neutral is simple, too. The belt final drive is both maintenance free, and quiet.

The ride quality is mostly comfortable.  Up front the 41mm non-adjustable fork offers 4.7” of travel and soaks up most bumps with ease, yet is still firm enough to hustle the Scout through the corners without feeling mushy.  Out back, the dual shocks are adjustable for pre-load, but there is only 3” of travel, so sharper bumps can send some shock waves up the spine.  With the 130/90-16H front tire, and the 150/80-16H rear, there is plenty of grip in the twisties, decent cornering clearance, and a stiff chassis to give confidence to set a course and carve through a turn holding your line through the corner.  The light weight makes side to side transitions easy. The Scout feels nimble and athletic.  Again, ride and handling is superior to a Sportster.

The ergonomics are very relaxing.  Seat height is a low at 26.5”, so even short legged riders like me can easily flat foot the ground. The reach to the bars is easy, and the slightly forward peg position is comfortable.  The solo seat is small, so you are locked into one position, but it’s nicely padded.

The solo instrument is mounted on the handlebar just ahead of the tank, so it’s easy to see.  The round gauge has an analogue speedometer, with an LED window for the tachometer, clock, tripmeter, odometer, and engine temp.  You won’t need that engine temp readout, since on warm days, you’ll feel some unwanted heat coming off the engine, especially on the right side.  It can be annoying when stuck in traffic. There is no fuel gauge, so you’ll have to watch the odometer.  However, there is a warning light that comes on when you’re down to half a gallon from the 3.3 gallon tank.   Cruising range is only about 135 miles or so, making fuel stops more frequent, and premium gas is required.

The original Scouts were made from the 1920’s through the 1940’s, and were good looking bikes.  Indian aimed to bring some of the heritage and classic styling cues to their modern motorcycles. (Check out the 1927 Indian Museum bike elsewhere in this section, and see what they were riding 90 years ago). The engine has cylinder stud casings that resemble pushrods, and the polished valve covers look retro.   The kicked-up front fender remind one of those on early Scouts, and there’s a bit of a resemblance in the curvaceous fuel tank.

The headlight is small, and the solo seat add a bit of nostalgia.  And if one doesn’t recognize those styling elements of old Indians, there’s plenty of badging to let you know what brand it is. Both mirrors have an Indian head etched into the bottom of the glass. A script “I” on top of gas tank filler, a script “Indian” on the top of the speedometer dial, and an Indian head logo on the bottom.   There’s an Indian logo on derby cover, and the words “established in 1901” on right side.  So everyone will know what it is sitting in the parking lot.

For those who look to personalize their motorcycles, there are plenty of Indian accessories to dress up a Scout, and the aftermarket is launching new farkles every day.  Indian has quick release leather saddlebags with hard plastic liners to hold the bags shape.  Two-up saddles are available, a quick release windshield, performance shocks, slip on exhaust pipes, and all manner of chrome bits.  So you can transform the Scout from a hot roadster to a touring rig for weekend getaways.  And they have some really cool clothing accessories with the iconic Indian logo for men and women.

The Indian Scout is an excellent, powerful, fun motorcycle that begs to be ridden fast. My hat is off to this Sportster fighter.   For anyone looking for a middleweight cruiser, you need to take a ride down to Monee to check this bike out.

It will impress you, too.