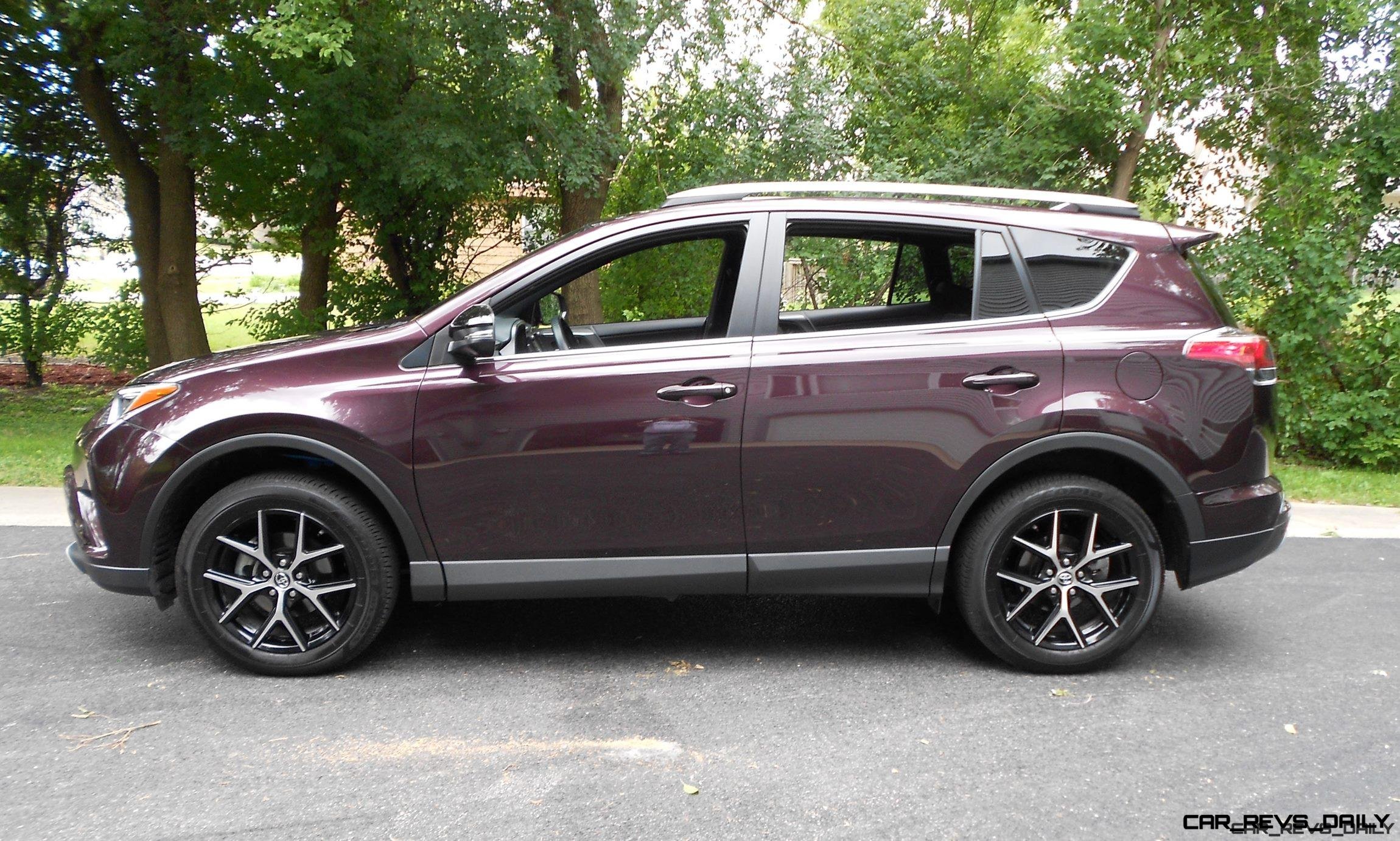 This is by far the most hotly contested segment in the industry.  And it’s not hard to see why. These compact vehicles offer similar handling, performance, and ride quality to small sedans, and add features like a larger cargo carrying capacity, higher seating positions for a better command of the road, all-wheel-drive options, and a variety of the latest creature comforts, safety technologies, and connectivity features.

For 2016, the Toyota RAV4, which was first introduced in the 1990’s, hasn’t seen a ground-up redesign, but rather has been updated and refreshed to keep it near the top of the sales heap.

Our test SE model with all-wheel-drive is equipped with the standard 2.5 liter inline 4, which puts out 176 hp, and 172 ft. lbs. of torque.  It is mated to a 6-speed manumatic transmission with paddle shifters, or lever shifter.  It’s no burner, but it will go zero to 60 in under 9 seconds, putting it near the middle of the competition in acceleration.  Still, it doesn’t feel sluggish or underpowered on the road, and the 6-speed automatic shifts smoothly and efficiently.  It will upshift early into higher gears to help with gas mileage, but the paddle shifters will allow the driver to control the gears if a bit more time in the torque band is desired.  The engine is rated for mid-pack gas mileage of 22 City and 29 highway, and a combined rating of 25 mpg.   We got 30 mpg on the highway during a 300 mile trip.

New this year, is an optional hybrid powertrain, which makes the Rav4 the only hybrid in this class.  That powertrain boasts a combined mileage rating of 33 mpg, a significant increase, and it will perform better in zero to 60 runs by nearly a second.

The SE model is a bit sportier than the base models, offering the paddle shifters as standard, and also has a bit stiffer and sportier tuned suspension and 18” wheels instead of 17”. Still, the ride quality is very compliant and comfortable, both on city streets and highway pavement.

No problems driving through corners.  Body lean in quite acceptable, and the driver feels confident pressing the issue through the turn.  The AWD system aids in grip and feel on dry pavement, and will be a big assist on icy road conditions. The electric power steering is responsive with decent feedback.  The Sport mode adds a bit more heft to the steering feel. The Rav4 isn’t as sporty as the Mazda CX-5, Ford Escape, or even the Hyundai Tucson, but we had no complaints with the way it handled.

The Rav4 rides lower than many other small SUV’s, so getting in and out of it is easy. There is a feeling of roominess throughout.  Excellent leg and headroom in front.  Responding to customer feedback, the 2016 Rav4 has upgraded to some higher quality materials and trim.  Soft touch materials are where they should be, and a revised instrument cluster adds a digital information display, and the rear passengers get a 12-volt outlet along with a USB port.  The dash is quite handsome, and the center stack is nicely laid out around the 6.1” screen.  A larger screen is available.  Using the touch screen was fairly easy, and the voice recognition was OK.  It seems odd, however, that Toyota didn’t include Android Auto, or Apple Car Play.

The heated front seats are nicely shaped, bolstered and handsome, with contrasting stitching.  Only the driver gets the 8-way power seat, however.  Still 5 hours on the road and we were completely pleased with seat comfort. Rear passengers won’t be quite as happy.  The seatbacks recline, but the bench is a bit stiff and flat and don’t offer much support.  Still, head and legroom are quite good, and it’s easy getting in and out of the rear.  The seats fold flat, offering a max cargo load of 73.4 cubic feet.  The liftgate was power operated, but doesn’t offer a hands free feature like the Ford Escape.

Our test car added the Advanced Tech Package for $3,030.  That adds a Bird’s Eye View camera with perimeter Scan, front and rear Parking Sonar, and a Premium Entune JBL audio integrated into the Nav and app suite system.   You also get Toyota’s Safety Sense features: Pre-collision warning with pedestrian detection, steering assist for lane departure warning, auto high beams, and dynamic cruise control.  This is a terrific package of safety features, and one that all buyers should get, even if it means moving down a trim level to afford the package.

Exterior styling has the usual crossover shape, nothing ground-breaking.  The front end has been reworked, and thankfully it doesn’t have one of Toyota’s new and really ugly “spindle grill” on it.  Narrow front headlights blend into the fenders and hood, and the fog lights peek out from angular cut-outs at the lower corners.  The rear end is a bit clunky, but the uniquely shaped tail lights provide an interesting visual element.

The SE with AWD starts at $30,665, and with just the addition of the $3,030 Tech Package and freight, the window sticker showed $34,595.  That’s a fair price for this vehicle.  It may not have class leading performance or mileage ratings, but no one vehicle in this category has all the class leading features.  However, looking at the entire package that the RAV4 offers, you’ll get a well built, high quality vehicle that hits almost every check box a family would want in a small crossover.  Now it’s up to the buyer to research the field to see just which vehicle in the crowded space offers the most for the money and the features desired.  Not an easy choice by any means. But you can’t go wrong with this choice.