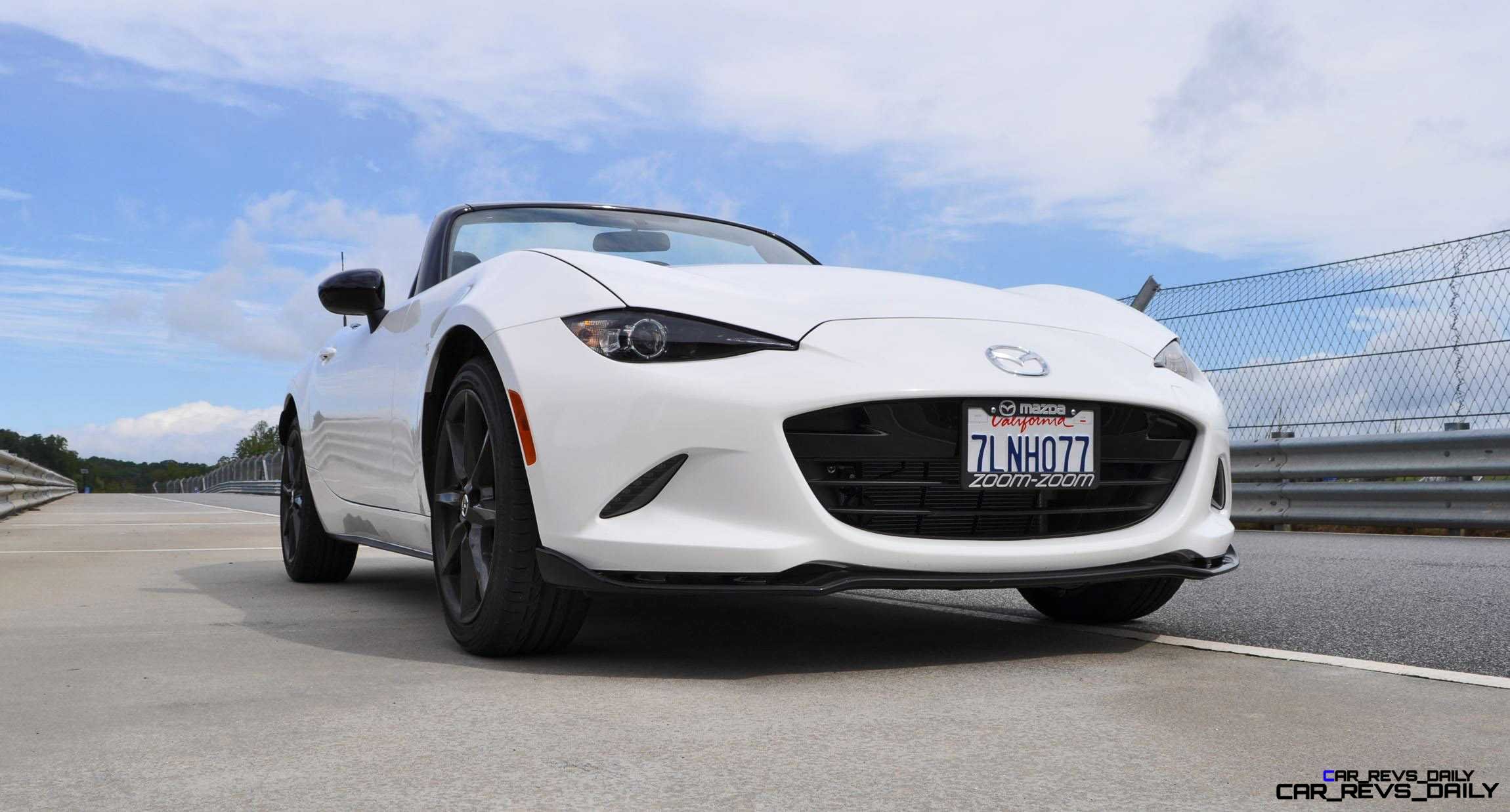 There are people out there not enamored by the all-new 2016 Mazda MX-5 Miata.

And you can include me. Well, sort of. Let me explain.

And when the Second Gen (NB to you and me) bowed in 1999, I liked it. But I was amazed that even though it only lost an inch of legroom, I didn’t fit comfortably. And really, I’m not that tall. I was personally happier when the 3rd gen 2006 (NC) model showed up. More interior room, noticeable power bump, and I really liked the styling – although some of the Miata club don’t seem to like it. And the later “smiley face” version did little to win over new friends.

The point is, the development of the MX-5 has seemed pretty organic, and at the same time admirable, as Mazda has kept the small, light, simple, ethos and avoided the middle-age bloat that has hit so many sports cars.

But I had issues with the new ND model. I get that Mazda had to break away, and make a vehicle that fell more in line with their current design language. Still, to my eye, it looked like it was trying to be something else… a shrunken Jag XK-F comes to mind. So while I was pretty sure that the new model would drive great (those engineers really do know their stuff) I was prepared to dislike it.

I lasted about a day. Then I fell in love with it.

But Mazda, you didn’t make it easy.

First of all, you hear about how roomy the interior is. Despite the exterior dimensions being close to the size of my 1990, it has more interior room than the previous NC. Music to my ears. There’s a piper to be paid for this, though. With all the modern safety equipment they have to shoehorn in, plus the info-tainment system control in the center console, ergonomics take a hit.

Glove box? Adios, amigo. There’s a large locking storage cubby mounted behind you. Cupholders? Well if you don’t have a passenger, you can attach one to the side of the passenger seat. But if you’re running two on board, the removable cupholders click in at the back of the center tunnel. Which 1. Gets in the way of shifting, 2. Makes you twist like a Yogi (the human pretzel, not the bear) and 3. Doesn’t really hold a cup all that well.

I will give a nod to the long seat travel that will let those over 6-feet tall finally enjoy the bliss of Miata without worrying about a bird strike in the forehead as you tower above the windshield. And while you lose a center console with any storage, you now have a modern touch-screen infotainment system, with Mazda’s easy to use control interface just aft of the shift lever. Nice.

Our tester was the luxury Grand Touring trim, which means we got cushy with leather-trimmed sport seats, Piano Black seatback bar trim, a 9-speaker Bose system with headrest speakers. (When you use the Bluetooth Hands free phone, it plays through the headrest, very cool!) It’s a quality piece.

Still, if the first time you get in the new Miata the top is up, it’s going to feel claustrophobic. There’s any easy cure for this. Reach up, pop the latch, and swing the top behind you until it click into place. This is actually even easier than the 1990, which was a revelation in soft top design when it came out.

For those needing or wanting a hard top, Mazda recently released the RF retractable hard top model, which is extremely handsome – OK, it looks like a baby Jag or Z4 M Coupe – and has more of a targa-top appearance since the C-pillars stay up in place, even with the top down.

Back to the roadster, top-down, all is right in the world. The 2.0-liter, 4-cylinder is sourced from the Mazda 3, but features significant sportification, turning it into a vocal, rev-happy monster. When the first Miata came out, Mazda spent an inordinate amount of time to get the exhaust sound just right, and it feels that way again. Especially with the top down, this motor sings.

The difference here is the Mazda is now a quick as it sounds. While the original wasn’t a doorstop, 0-60 in 9 seconds wasn’t anything to write home about, even in 1990. What was important was the responsiveness of the throttle, the sound, and the amazingly slick, snick-snick shift action of the 5-speed manual transmission.

In the new model, 60 comes up in under 6 seconds, which really is pretty fantastic in a car with only 155 hp. It fits perfectly into that gray area of fast enough when you need it – like merging on a freeway – but not so fast that you can’t rev the beans out of it without getting into major trouble.

Handling is also at a much more elevated level – no surprise here, as technology, suspension design, and tire quality have changed much in 26 years. Steering feel is excellent and precision is pin sharp, yet it has none of the nervousness that has marked previous versions. The electric power steering really firms up on the highway, helping you track straight with ease, and makes it much easier to cruise long distances.

Speaking of comfort, our Grand Touring is about as soft as a suspension you can get, and we find it a perfect blend of sport and touring. We think you should drive it before you opt for what would seem to be the de facto nutball special – the Club model with Bilstein shocks, limited slip and the available $3,400 Brembo brake package with BBS forged alloy wheels.

If you’re going to the Solo 2 Nationals or up for serious track work, it’s worth considering, but you’ll pay dearly in ride comfort, and with something as sweet as the new MX-5 (there, I said it, but to me it will always be a Miata) we’d opt to maximize our road time and give up the few extra tenths of a g. With trophies may come numerous visits to the Chiro.

Whichever model you ultimately go for, we’d spec it in the off-white Ceramic Metallic. To our eyes, simply stunning, especially with the standard dark wheels that come on all the trims.

While Mazda has kept the Miata on a serious diet, the price has gotten a little pudgy around the midsection. The entry level Sport model, at a reasonable $24, 915, makes a good case for all the sports car you’d ever need, with all that Miata goodness, plus a fair share of comfy with power windows, locks, a/c, 6-speaker audio system with headrest speakers, Bluetooth phone and audio, and USB port.

Go for the more hard-edged Club and you start at $28,600 and with the Brembo brake and BBS Wheel package, whammo! You’re at $32K. If you’re lured into the lap of luxury, the leather-lined, climate controlled, navigation guided, safety-gizmoed stickers in at at $30,065.

Still, there’s little else that competes. There is the Fiat 124 Spider – basically a Miata, but with Fiat’s 160 hp turbo engine – which may be an interesting choice. We’ve yet to drive it, and we’re kind of stuck on the normally-aspirated idea. Although the idea of turning up the boost is intriguing…

You might want to look at the new Mini Convertible, and 370Z roadster, but they feel a step away from the purist purpose of the MX-5. It’s really in a class of its own. Much like it was in 1990, and pretty much ever since. Simple, pure, driving joy. The essence of sports car. OK, there might be two Miata’s in the Ben Lewis garage soon.