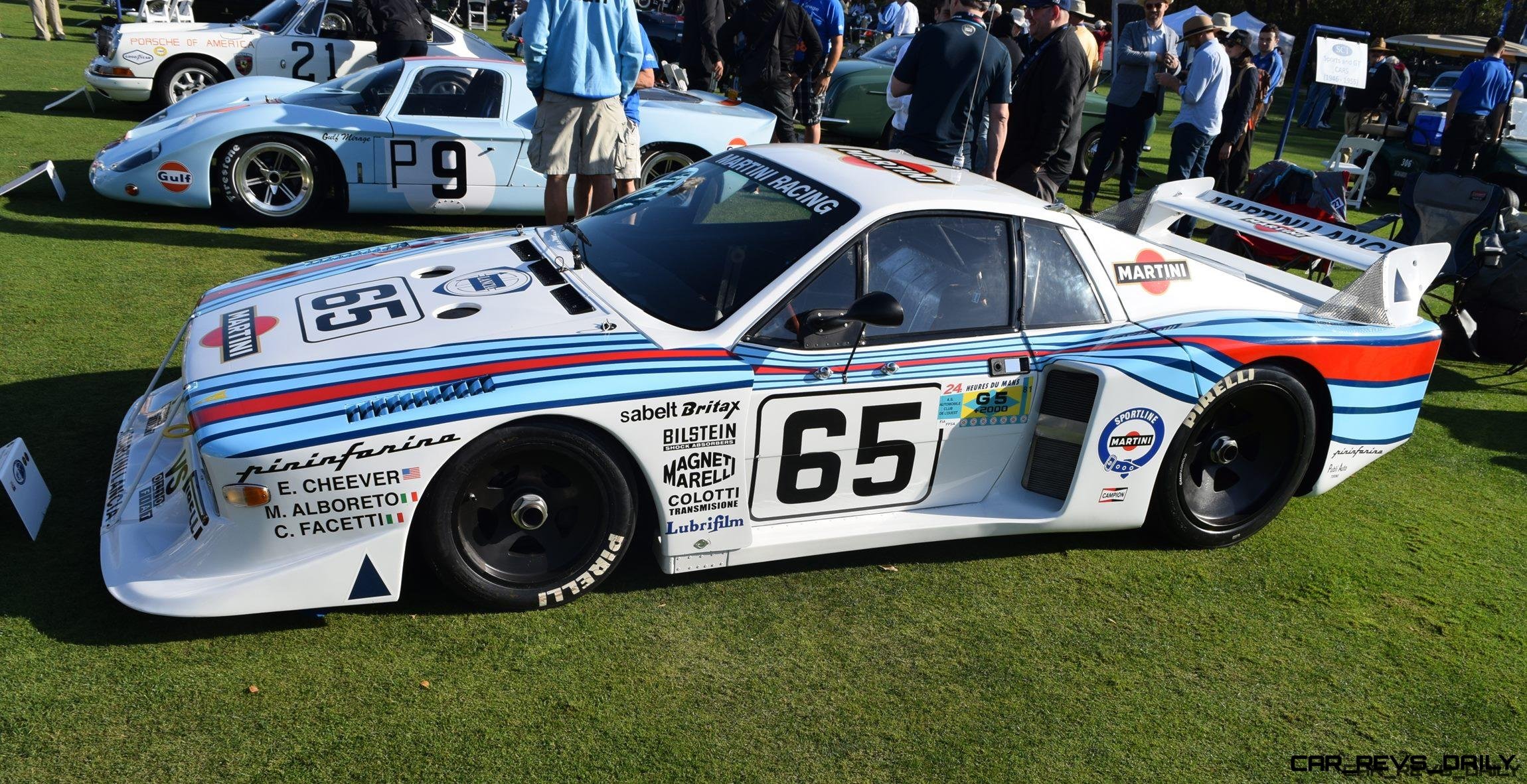 This Group 5 rally racer won the WRC championship in the silhouette category for two years running for 1980 and 1981.  It was a bleeding-edge technological showpiece that ran a carbonfiber chassis and part-kevlar bodywork. Great to meet this stunner at the Amelia Island Concours 2017, where it actually lives locally in the stunning collection of John Campion. We had the pleasure of seeing its home garage before the concours and almost had to sit down from excitement.  So much Martini Racing and so many authentic Lancia race-winners! The Beta Monte Carlo turbo’s most dramatic angle and aero needs came … We have a couple really cool concepts in the pipe from CES for later tonight and tomorrow, but a bit of a lull at moment. What better time to showcase a very influential concept car from Stola for Lancia at the Turin motorshow of the year 2000. Dubbed the Stratos S81, the machine updated the original proportions and design elements of the Lancia Stratos rally hero — but three decades later. WHat really strikes you about the S81 in 2016 is how influential is details ended up being, albeit long after its retirement. Most cloned details?  The boomerrang of …

What else to say about this incredible quartet of rally heroes!? Please enjoy these 52 photos from one of the best rally legacies of all time.   LANCIA Rally Reunion – Stratos, Integrale, Fulvia and 037 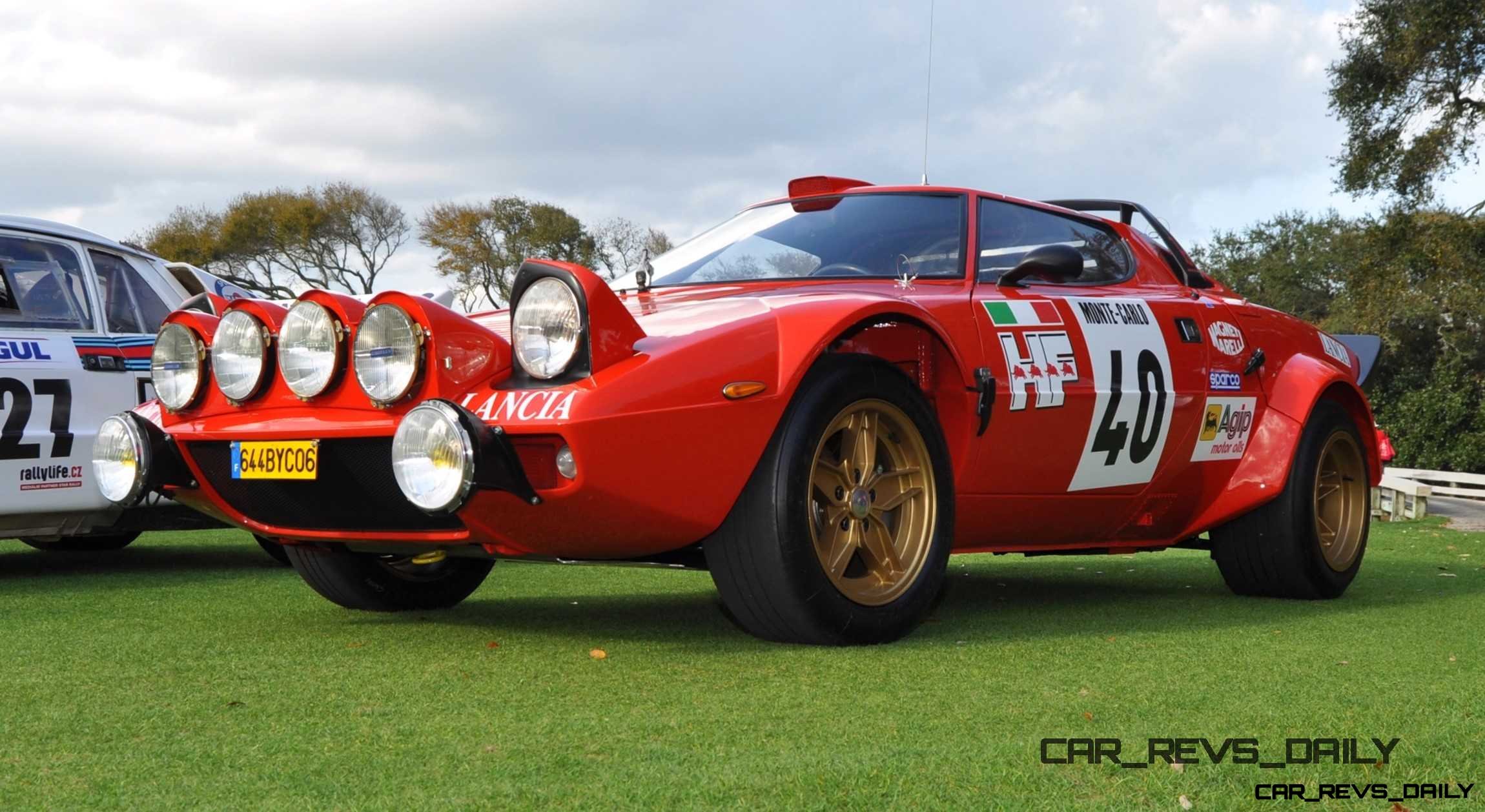 As fantastic as the Stratos production models were, the rally car is in another league of intensity. Giant fender flares, hugely oversized tires and a raised ride height make this exotic wedge look as ready for off-roading as was possible. Considering it is essentially a hypercar, the idea of whipping through the forest, drifting so wide that the side windows look forward is almost unreal. Terrifying levels of power, extremely limited grip and flyweight dimensions mean the Stratos was a next-level machine in the world of rallying. The Stratos won the newly-formed WRC for three years in a row from … 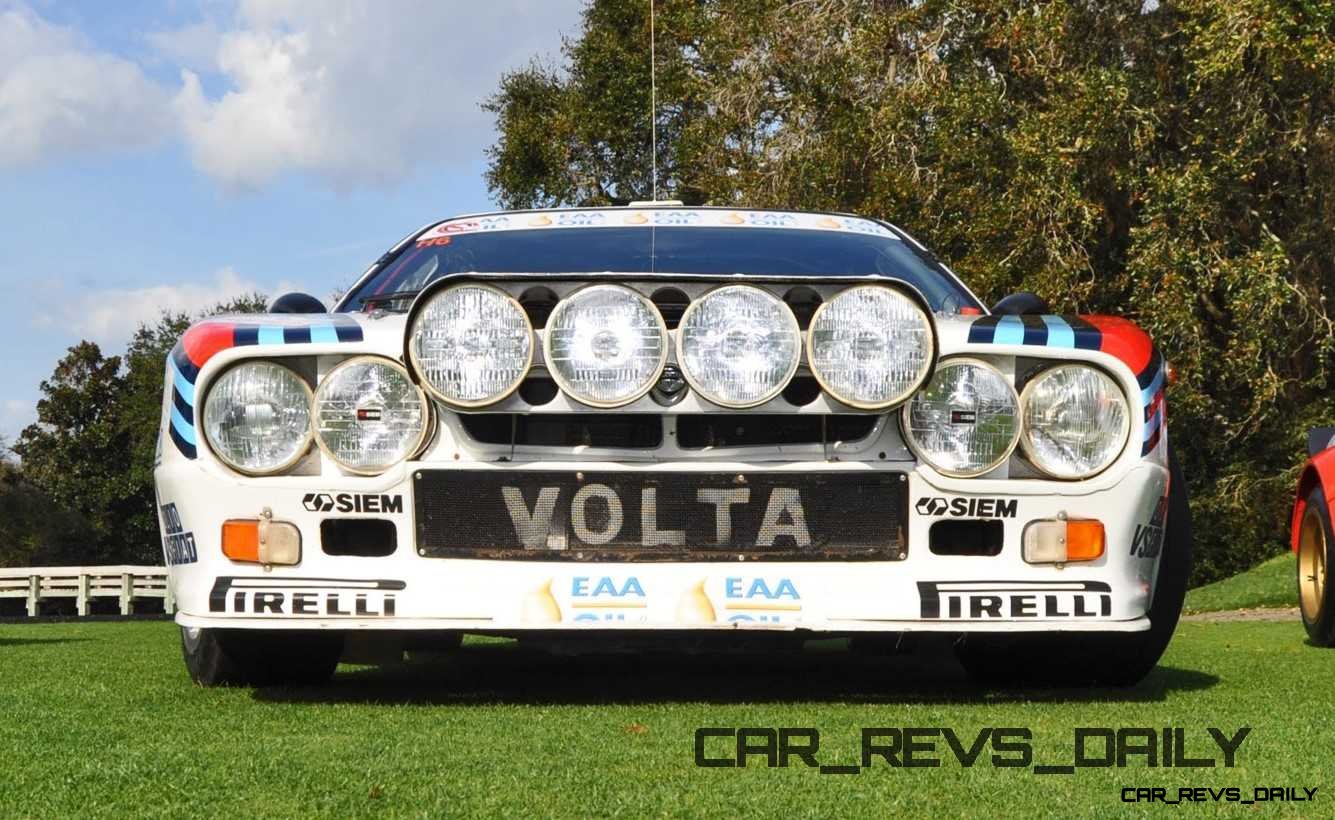 The Lancia 037 is a rare standout among the four all-star Lancia rally cars reunited for the Amelia Island 2015 Concours. Rare because unlike the others, this machine ditches almost all sense of road-car in favor of an extreme supercar package. In proportions and width, this mid-engine, rear-drive turbo monster is what happened when the Lancia and Abarth racing teams start from a blank sheet of paper — engineering an all-star from the ground up. As one of the first cars anywhere to use carbon-fiber composites, the “zero-three-seven” was named after is project code in the Abarth speed labs. The … 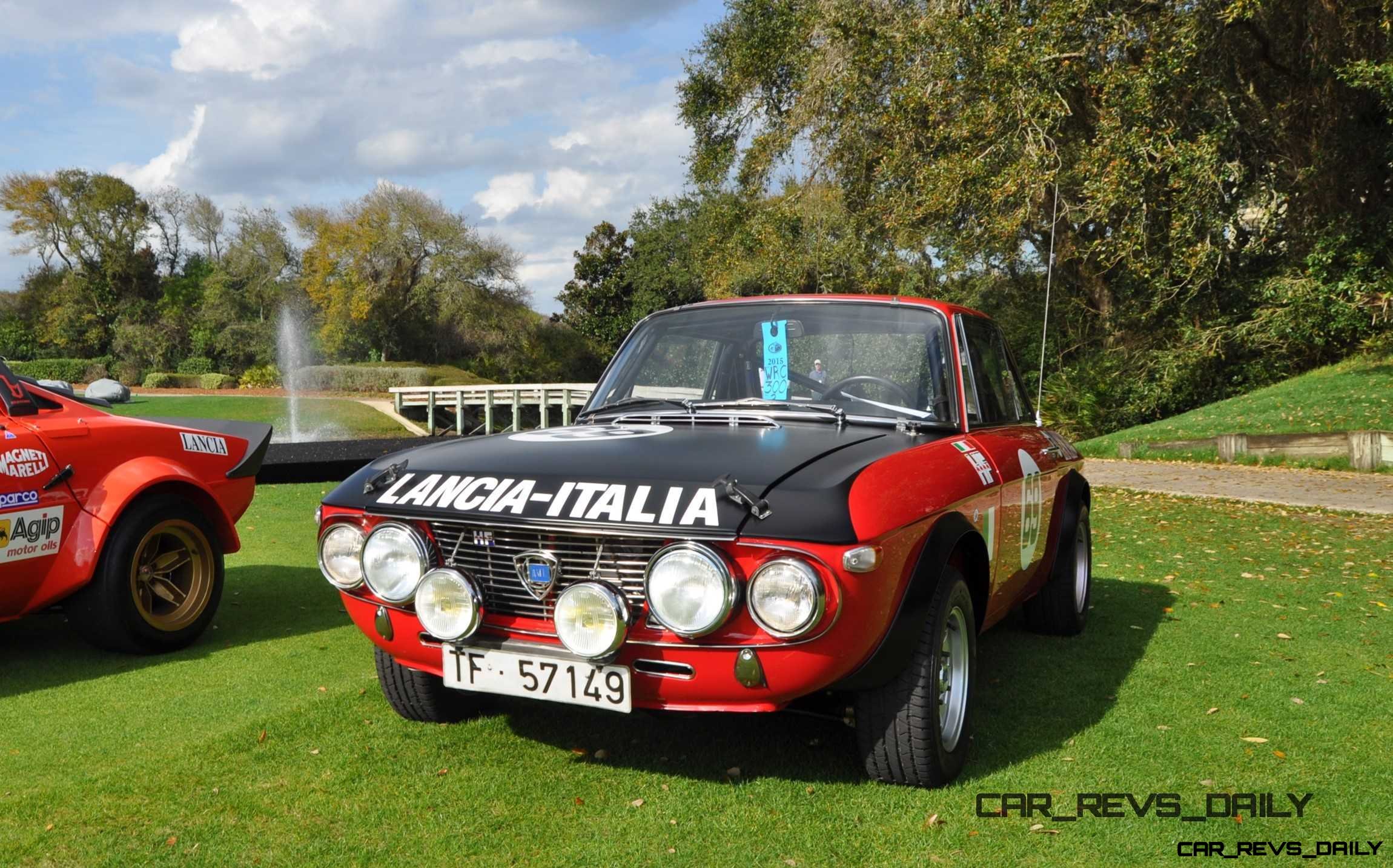 The Lancia Rally legends series? Not just winners in the racing arena, but also the historical influencers and taste-maker charts. If the Delta Integrale inspired the Mitsubishi Evo and Subaru WRX, what did this Lancia Fulvia spur to life? None other than the also-important BMW 2002. Important groundwork was laid here for the rear-drive Stratos, which would dominate the first few years of the official WRC race series with its lightweight panels, ultra-compact design and supercar performance — optimized for the dirty, dusty and ice-covered rally race routes. 1969 Lancia Fulvia 1600 HF Rallye 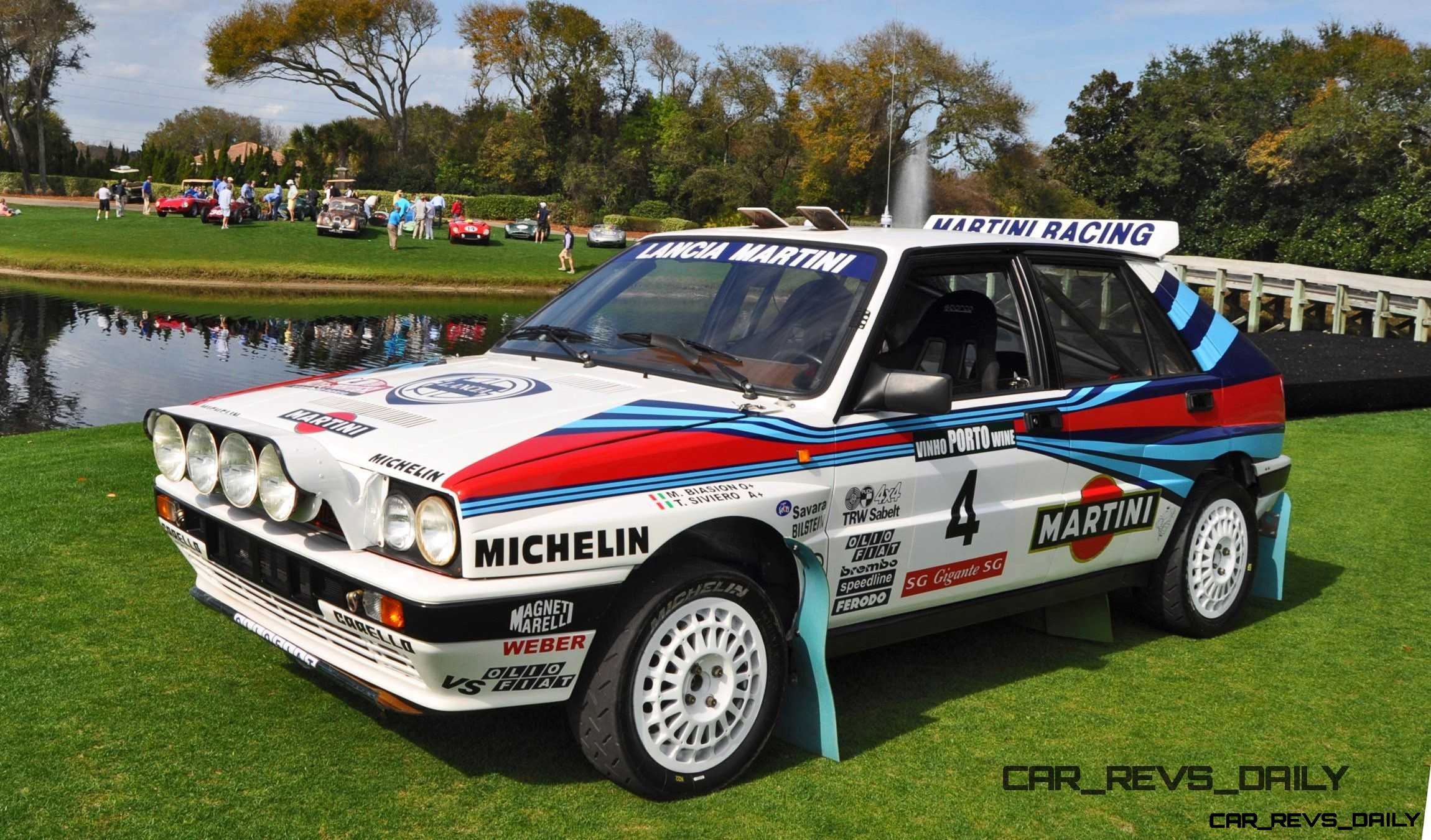 In the World Rally Championship record books, no single vehicle or manufacturer has been more dominant than the Lancia Delta. Winning the championship from 1987 through 1992, this tops every winning streak by other big hitters: Subaru, Peugeot and Citroen included. Being able to meet the actual race-winning vehicle is special in any circumstance, but to be able to photograph and document the vehicle in detail is beyond special. It is inspiring to see the Lancia Delta in its full Martini Racing livery, even today almost thirty years later. Inspiration from the Lancia Delta Integrale formula spanned the globe after … 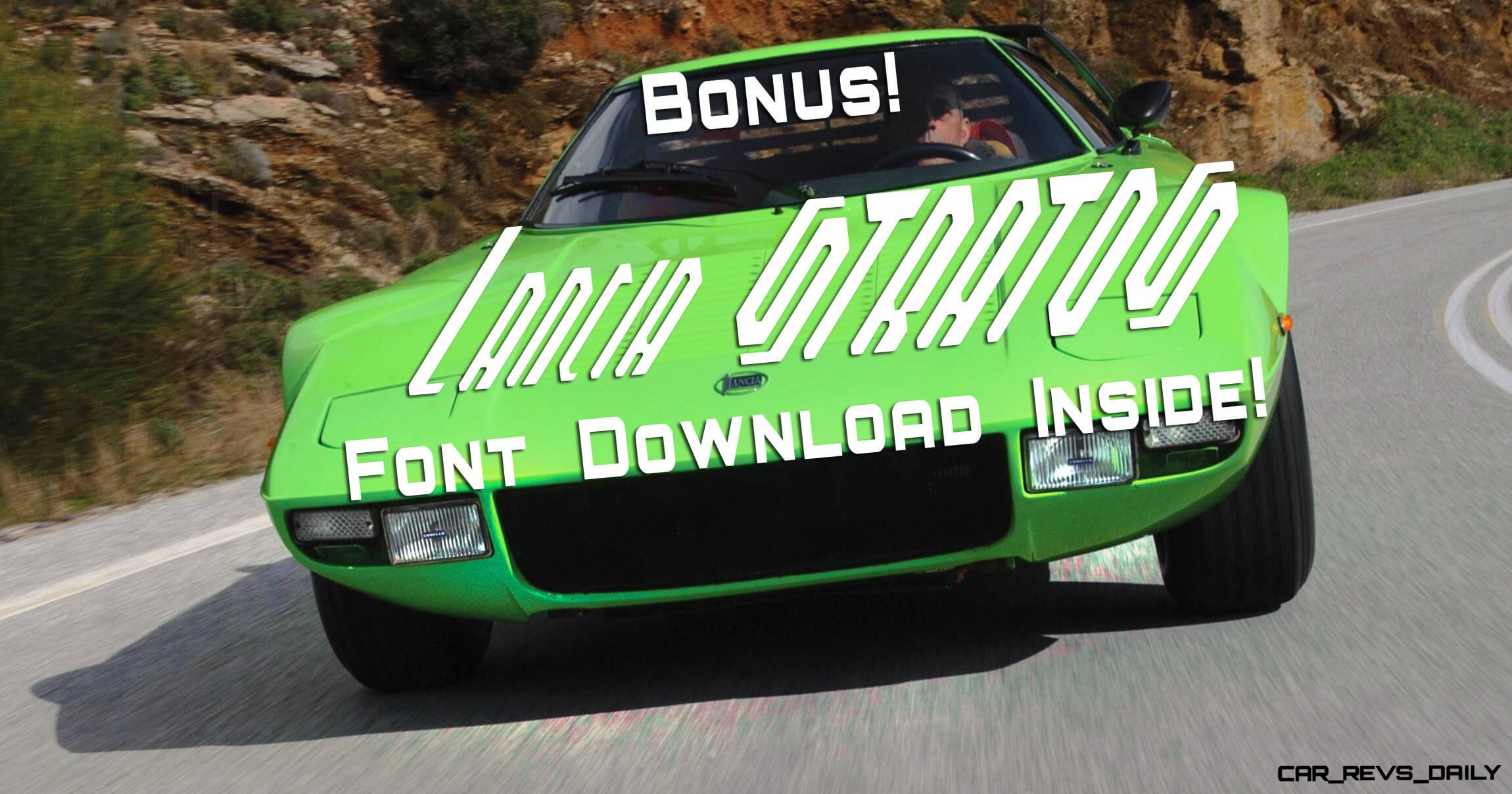 On the eve of the Amelia Island Concours and RM Auctions sale, here is one we cannot resist sharing. Why? A.) It is a STRATOS. B.) It is the high-performance Stratos HF C. It is a delicious lime green that is sweet on the eyes, and tart on the tongue D. All of the above. RM Auctions will sell this stellar piece of automotive brilliance at the Lake Como Concours in Italy on May 23rd. BONUS! As a special bonus, here is the outrageous STRATOS typeface for use on your computer. Not super practical or legible, but gorgeous and unique … 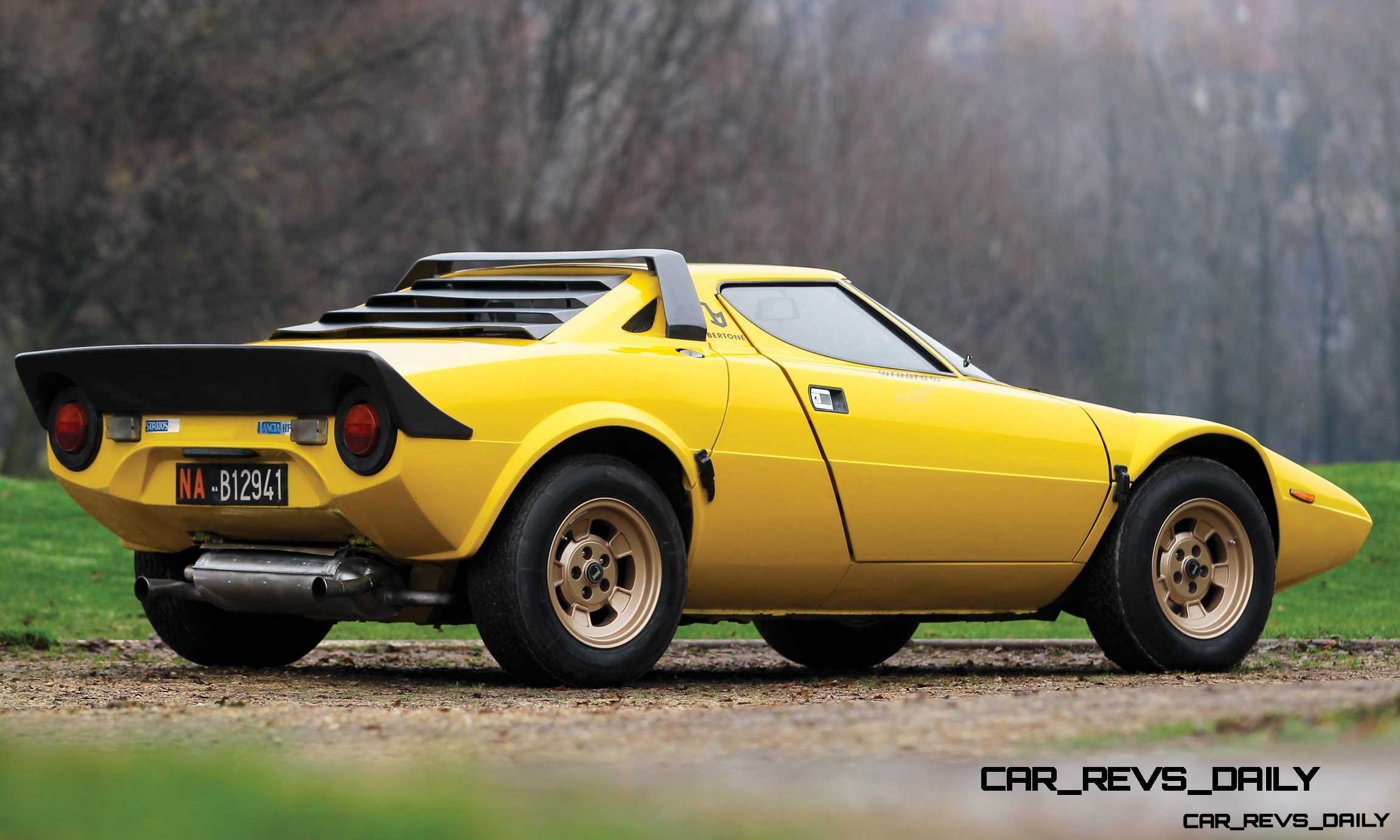 Every Stratos is special, but some more than others. This HF Stradale was the absolute top of the line when launched, and proved far quicker than every Ferrari of the time, and even the Lamborghini Countach. The Ferrari’s and Lambo’s could only outrun the Stratos on extremely high-speed autobahn runs or Vmax tracks like the Nardo. 1977 Lancia Stratos HF Stradale by Bertone RM Auctions Paris 4 February 2015 Lot 121 1977 Lancia Stratos HF Stradale by Bertone To be auctioned on Wednesday, February 4, 2015 €350.000 – €450.000 Chassis no. 829AR0 001819 Body no. 051 192 bhp, 2,418 cc DOHC …