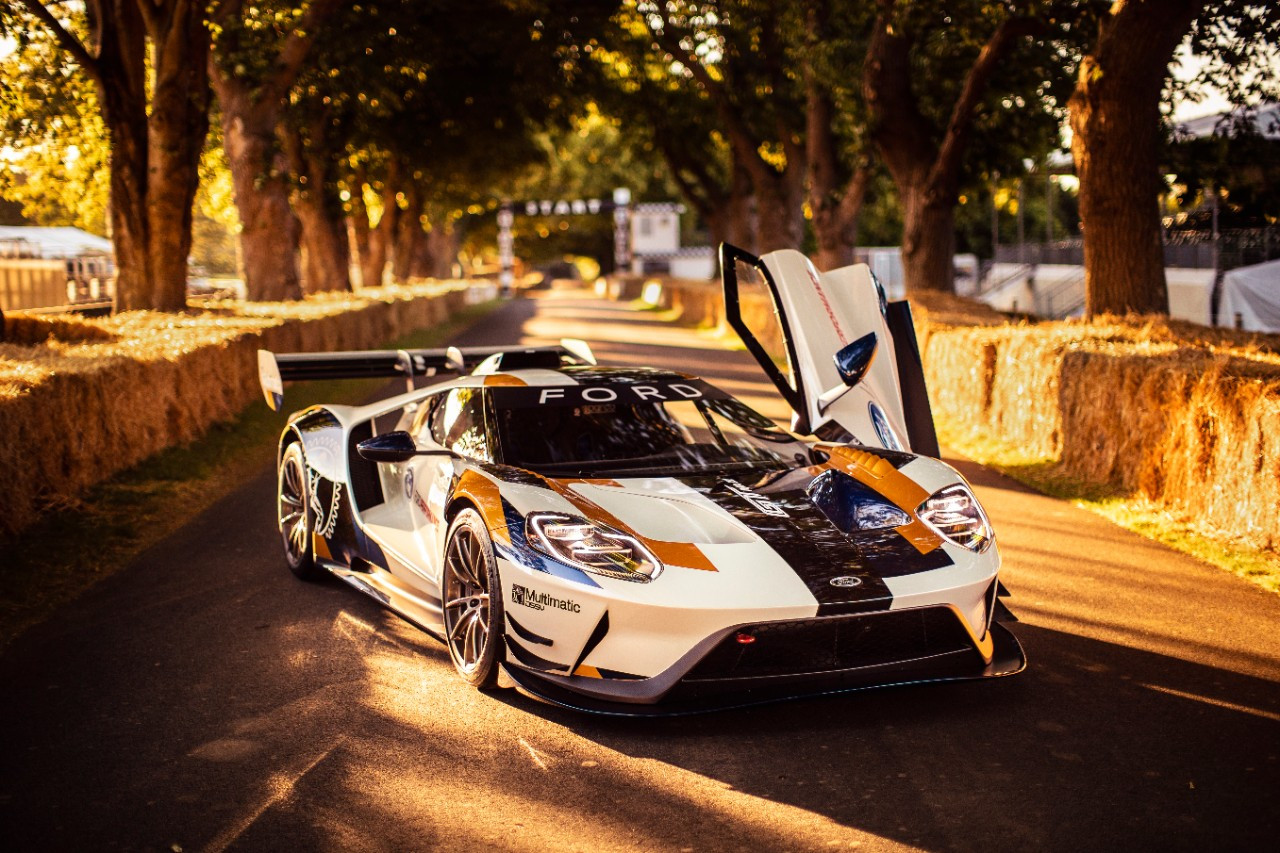 When we last checked in on Ford’s upcoming variant of its GT supercar, it was via a shadowy teaser image that gave few answers, and left us asking a lot of questions on what exactly Ford was up to? Fast forward to today’s unveiling at the Goodwood Festival of Speed, and the blue oval has unveiled the next evolution of GT performance which it calls “the ultimate GT” offering.

Dubbed the GT Mk II, it embraces this fresh start in earnest by throwing out any intent of being a road legal offering (though we suspect that won’t stop some of its potential owners from trying,) with the Mk II being designed from the very beginning to be a track focused offering. Unlike some other limited production hypercars that are being produced in conjunction with a particular racing series, the Mk II has no such restriction, which allowed Ford and Multimatic to give it everything they had in designing the car for track duty. The most notable additions are found on the aerodynamic side of the equation, with Ford and Multimatic engineers bestowing the car with a very aggressive aero package. Since the lack of a formal racing series also means no restrictions whatsoever, the two companies could push the envelope in terms of what the GT can bring to the table in this particular regard. This means the addition of a very large front splitter, as well as an equally beefy rear wing to help give the GT the right amount of downforce it needs to stick to a challenging track or road course. A large diffuser also hangs out the rear of the Mk II, and Ford claims that the add-ons help produce 400% more downforce than a stock GT, and also allow the car to pull up to 2 g of stomach turning lateral grip at the same time.

The radical transformation also causes the GT to shed a massive amount of weight, with the GT Mk II weighing in at 3,064 lbs. That’s 244 lbs more than the championship focused GTE race car, but is still 200 lbs lighter than the GT street car. Ford claims that the bulk of the weight savings here were achieved by removing the car’s adjustable ride height system, as well as the drive mode mechanisms. In their place is Multimatic’s five way adjustable DSSV dampers and a fixed ride height. We adored the DSSV system on the Chevrolet Colorado ZR2 we reviewed recently, and while the application in that instance was decidedly tailored more towards off-road driving, the GT’s system was designed to deliver optimum handling behavior out on the track, and that should please buyers looking for maximum levels of poise and grip. Like the rest of the alterations here, there is some compromise with the Mk II still riding 5 mm higher than the GTE racer, but that is comparab lower than the road going GT in its lowest ride height setting.

Arguably the biggest benefit from the lack of racing series compliance restrictions is that the 3.5 liter twin-turbocharged V6 can at long last be unleashed to its maximum potential. Ford engineers dialed things up slightly, and the car now boasts 700 horsepower which is a 50 horsepower gain over the standard GT, but is roughly 200 more than its racing sibling thanks mainly to the removal of various restrictor plates and other Balance of Power technology that is supposed to limit engine output for the sake of maintaining a degree of competitive fairness in many racing championship series events. Ford claims that with the Balance of Power not being included here, the car should be more than capable of delivering neck snapping amounts of acceleration with more of the punch these picky buyers expect. Instead of using the GTE’s racing transmission for this application, Ford engineers decided to retune the existing seven speed Getrag sourced dual clutch automatic for quicker shifts, and the exhaust system also features no mufflers, making this model a true race car in the purest sense. The straight pipe exhaust delivers a raucous exhaust note, but its close proximity to the diffuser prompted the addition of heat reflecting gold foil to help prevent thermal damage to this sensitive component.

The strong emphasis on heat control also caused Ford engineers to adopt other methods of keeping things cooled down. The “trunk” (which barely qualified as one to begin with on the road car) has been removed, and it now houses an all new auxiliary cooler for the engine, clutch, and the transmission coolers. This novel system gets air from the roof mounted air intake, and is paired with outboard mounted charge air coolers which come bundled with water sprayer technology. The water sprayers activate when the car senses high temperatures, and Ford claims that this will allow the GT Mk II to run on the track all day until the driver physically can’t do it anymore (now that’s impressive.) Carbon ceramic brakes arrive standard on the new model, and are paired with race tuned brake pads for maximum stopping power, especially during aggressive track driving.

As for the interior, it too has been prepped for track duty, with practically all the innards stripped out and the space designed to accommodate the custom Sparco racing seats that were specifically commissioned just for this particular model. In lieu of a distraction producing infotainment system, the Mk II comes equipped with a MoTeC  data acquisition system that also doubles as the display for the rear backup camera. A passenger seat and a racing duty air conditioning system are optional, but both of those items add weight. So buyers will have to choose which items they prioritize the most, achieving solid track times, or shaving a few seconds to let other well heeled friends come along for the ride. Look for some of the GT’s more rudimentary comfort features to remain intact, including the novel adjustable pedal box to help taller or shorter drivers make full use of the Mk II’s potent track slaying abilities.

Despite being recently unveiled at the 2019 Goodwood Festival of Speed, Ford claims that there are still a few available for purchase, with only 45 units being built for the entire production run. To ease fears of the cars adding onto the 1,350 unit production run for the broader GT lineup, Ford revealed that the 45 will be allotted out of the that particular number. Multimatic claims that it can build about 15 of these per year, so buyers will certainly want to get in touch with Ford as soon as possible on their interest to own one. But like before, buyers will not be able to simply walk into their local Ford dealership to get the keys, with the company still hand picking every buyer that will ultimately get one. In the case of the Mk II model, the process will be much stricter, with Ford claiming that only buyers who will use this special car to its full potential out on the track will be considered. In the meantime, Ford has released a short video covering the GT Mk II in more detail, and with the Goodwood Festival of Speed taking place during the 4th of July holiday, we have also added a second video of its run up the hill, which can all be seen below.