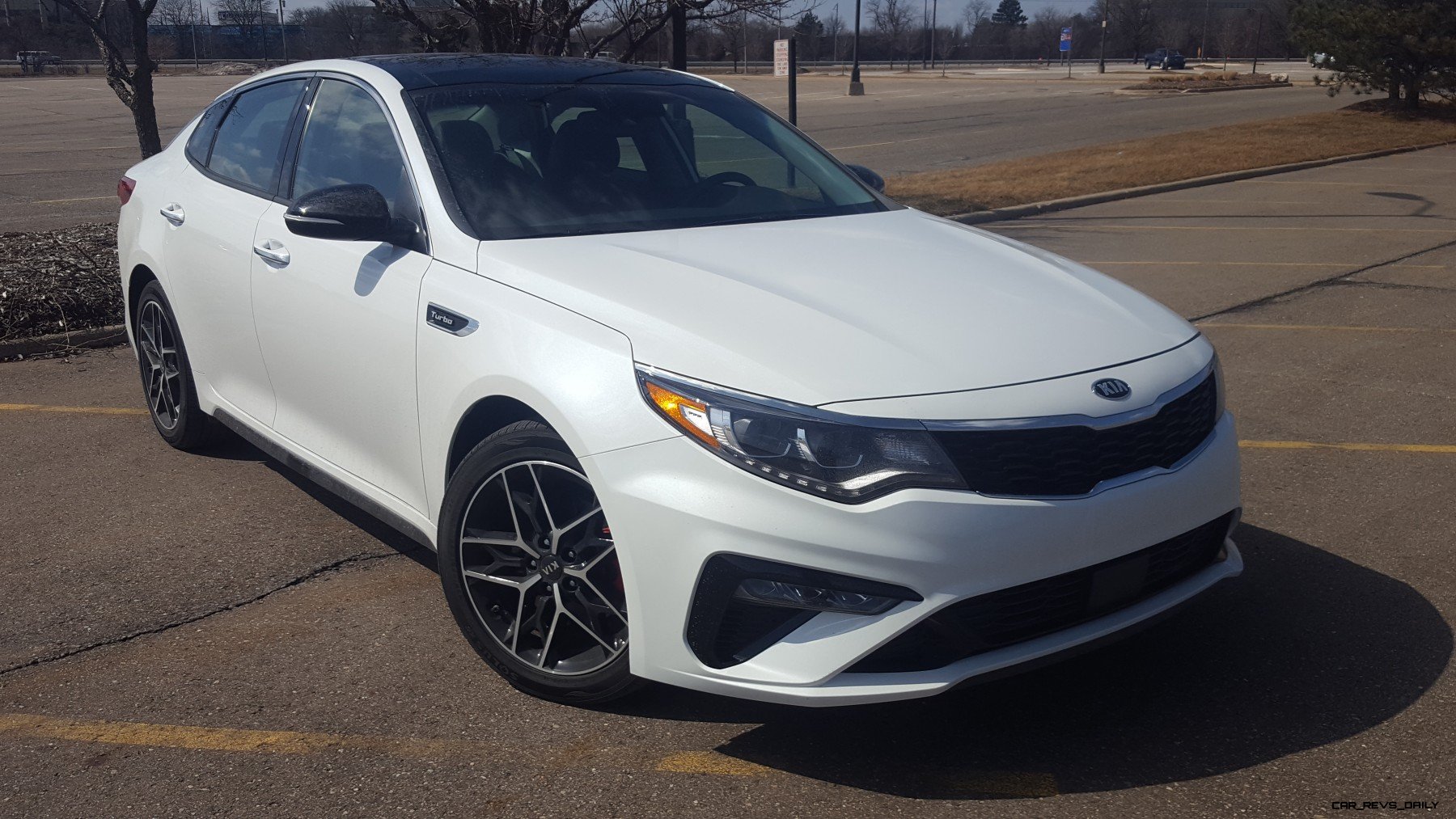 Kia has been on a roll as of late. Led by the Kia Stinger, the sleek four door sport sedan helped change peoples perception of the Korean car brand. Once known for making budget focused entries that eschewed style and performance for the sake of a low price tag, the Stinger showed the world that style, performance, and technology have become the new pillars for future Kia products going forward. The Stinger’s DNA has begun trickling down to other members of the Kia lineup including the 2019 Kia Forte, as well as the reworked 2019 Kia Optima. But can the 2019 Kia Optima still channel the same building blocks that helped define its predecessors rapid rise to popularity? Or has this infusion of Stinger DNA gone horribly wrong?

The first step to try and answer this question is judging the Optima’s exterior revisions for 2019, and based on what our tester brought to the plate during its stay with us, we think that Kia designers hit the nail on the head when it came to bringing some much needed swagger to the Optima’s lines. Revamped front and rear bumpers do their best Stinger impression, and the snappier suit of clothes also caused our tester to draw its fair share of attention when making the daily commute through town. Tweaked front headlights feature Stinger inspired LED daytime running lights, while the rear taillights are much sharper than before, and now come equipped with LED accents. Choose a range topping SX variant like our car, and you are also rewarded with 18-inch multi-spoke alloy wheels that are adorned with black accents.

These sporty touches are welcome additions, but they fail to bring some unity to the design, with our tester feeling like it is a rehashed version of the current generation Optima. The 2016 Optima ditched an all out redesign for a more modest refresh of the outgoing car, and three years later, it’s disappointing that Kia still chose to play it safe, and opted to phone it in so to speak, versus going all in with the updating stylus. But while the exterior styling may lack the inner beauty that some of its competitors present to the masses, don’t expect that to bother Optima buyers too much. In fact, the Optima is one of Kia’s best selling models, with over 80,000 units being sold last year. It also has more flair than some of its rivals, including the Toyota Camry, the Chevy Malibu, the aging and not long for this world Ford Fusion, and even the Honda Accord. That’s an impressive roster, and we are pleased to see that the Optima can play ball with some of these stalwarts on a roughly equal playing field.

A Sporty Interior Undermined By Compromise:

The interior of the cabin was clearly inspired by some of the sportier elements that Kia has been trying to inject into their recent models, and on the surface it does bring some good things to the table. For example, the two-tone red and black color scheme is part of an SX exclusive appearance package, and the sport infused front seats do offer good amounts of support, and are very comfortable places to spend time in. Kia’s revised UVO infotainment system is another highlight, and it now comes in three flavors to try and appeal to a wide range of budgets. Our car had the top of the line system with the integrated navigation software, and we fell in love with how easy it was to use, especially the way that various buttons and controls fell easily into the hand. We are also glad to see that its integration of Android Auto (the default phone format here in the office) is still one of the best in the segment.

However, there are also cheaper plastics scattered about through out the interior, and these shinier plastics do betray the upscale vibe that the Optima is trying to go for in this particular trim. Rear headroom in our tester was also very tight, but thankfully, the decent amounts of rear legroom do help mitigate some of this somewhat, and it allows rear passengers to stretch out and relax. We also heard a few rattles from the front passenger dashboard, and the brightly colored front seats could’ve used more side support during curvier sections of driving. We wish that Kia designers will address some of these short comings, since the Optima does bring a lot of good traits to the table, and we hope that a more extensive rethink will allow the cabin to truly shine and be a rattle free place to spend time in.

Punching Above Its Weight In All The Right Ways:

The Kia Optima has always been known for bringing a diverse arsenal of powerplants to try and cater to a wide range of buying tastes. While a 2.4 liter four cylinder engine and a 1.5 liter turbocharged four are two of the engine choices this time around, our range topping SX tester arrived with the third engine in this potent trio, the 2.0 liter turbocharged four cylinder engine. Producing 245 horsepower and 260 lb-ft of torque, the engine is very well sorted here in the Optima, and unlike other Hyundai/Kia offering with this engine, we did not notice as much turbo lag, and the engine has a strong punch in the lower half of the rev band that allows it to be a very spirited treat when leaving stoplights with plenty of low end boost available. The engine also has a nice sound (a rarity in the mid-size sedan segment) with a nice low burble emanating from the exhaust tips that transitions into a bold rasp when pushed hard.

A six speed automatic does lose a few cogs to some of the eight speed transmissions that populate the mid-size sedan segment, but it sends the engine’s power to the front wheels in a relatively smooth fashion, with smooth and crisp shifts accompanying the engine’s spirited soundtrack. Sport mode is arguably where the six-speed shines best, with the unit holding the gears longer to help reap the benefits of the engine’s abundant power band. It’s a pity that the Optima did not get the refreshed Sonata’s eight speed slush box, but the old six-speed proves to be a very decent alternative, and we cannot wait to see what happens when the Optima eventually gets this novel unit. It’s 6.7 second 0 to 60 time is also quicker than its more luxury laden cousin, but when viewed against rivals, this figure is less impressive, with the Mazda 6 needing 6.4 seconds to achieve the same feat when equipped with its bigger 2.5 liter turbocharged four cylinder engine. Both are eclipsed by the Honda Accord 2.0T Touring, with the de-tuned Civic Type R motor and the optional 10-speed automatic helping the Japanese icon blitz its way to 60 mph in 5.7 seconds.

Unlike the engine which is always more than eager to play, it’s very clear that the platform and the revised handling hardware that makes up its inner workings clearly did not get the memo about having fun. Bodyroll is too abundant for the kind of experience that the Optima SX is trying to deliver to its clientele, and the numb steering felt less like a clone of the Stinger, and more reminiscent of a 1990’s era Cadillac. A shame since the Optima is a car that is practically screaming to be freed from its constraints, and be allowed to access some of the hidden potential that lies stubbornly locked away by the fore-mentioned steering rack and intrusive stability aides. Here, the Mazda6 and the Accord all boast better driving dynamics, but the Optima’s chassis did do a good job delivering a smooth ride when tasked with freeway driving, and it was fairly quiet, save for some occasional tire noise when going over sharper divots.

Pricing for the 2019 Kia Optima reflects the diverse character that exists deep in its platform, with the base LX model starting at $22,290. Moving up through the range causes pricing to gradually increase as expected, but unlike other models that see big jumps with each successive trim level, even the EX model still commands a base price of $26,890. It’s not until you reach the SX trim that the pricing ladder crosses the $30,000 barrier. Our lightly optioned tester had a final sticker of $32,395 which is still very good for its segment, and allows it to go toe to toe with the Honda Accord, Chevrolet Malibu, and even some iterations of its corporate sibling the Hyundai Sonata. The Toyota Camry is another potent rival, but while its V6 engine and reworked styling have allowed it to venture closer to the Optima when it comes to sporty design, the Camry still falls a bit short when it comes to driving dynamics as well as lacking a formal turbocharged engine to fully counter the Kia’s boosted unit.

When all is said and done, the 2019 Kia Optima is a much improved offering. While it does not quite have the same degree of polish and poise that define the bigger Kia Stinger, what it did gain from its corporate cousin has allowed the Optima to take a renewed focus on dominating the mid-size sedan segment, and we look forward to seeing what a full on redesign will bring to this already spirited offering. Our wish list will include a formal eight speed automatic, some better plastics, and minor trim changes, and we are keen to see if Kia designers will be able to rise up to the challenge of delivering when the time does indeed come for the next generation to arrive.