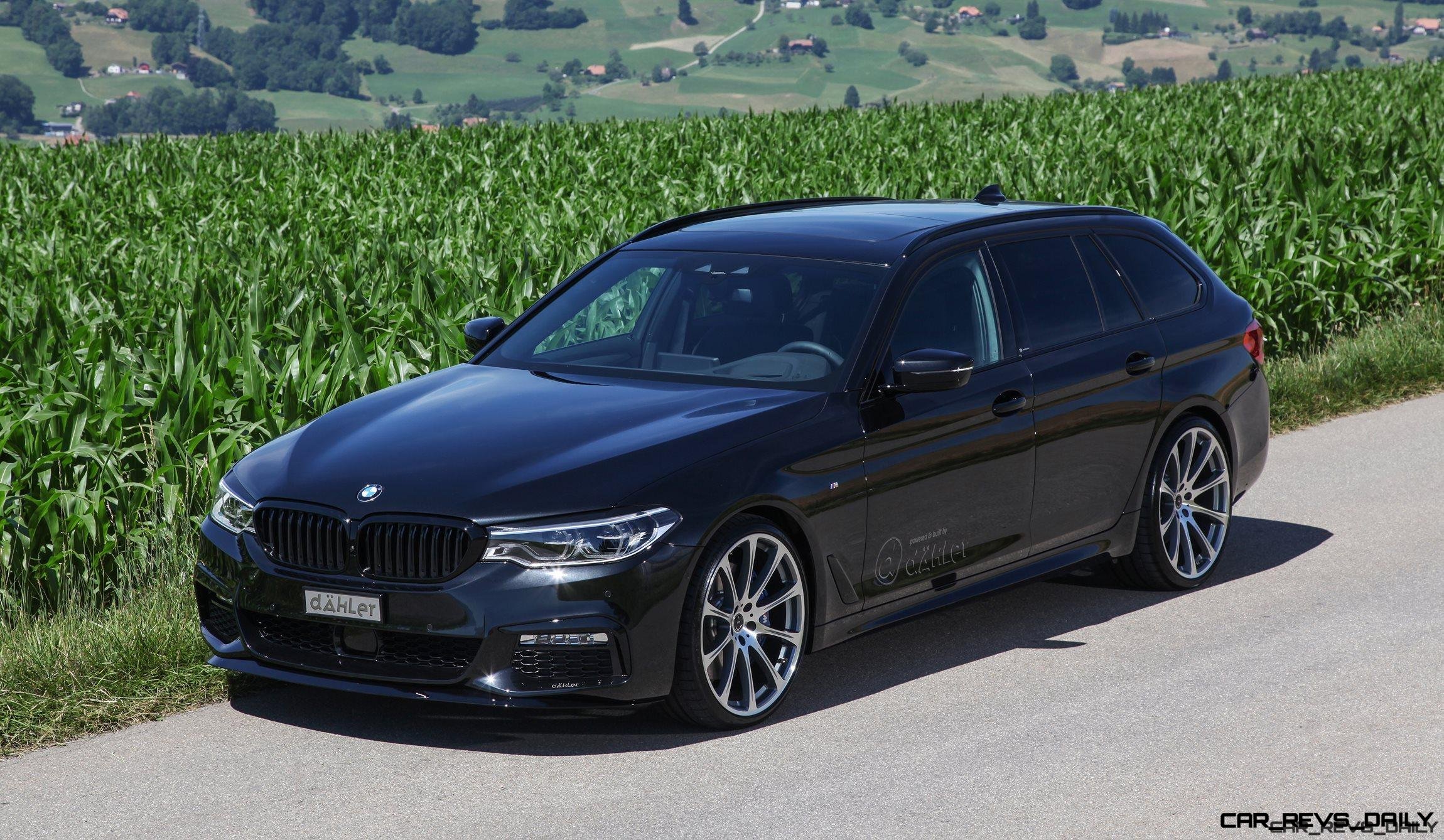 The new BMW 5 series is a huge game-change of a car for the roundel brand.  It is so, so new in how it drives, feels and… looks?

This is probably a good thing, as it harks back to the long-successful BMW strategy: one bratwurst, three lengths.

But what about those who want hot street style to go with that fab new interior and steering feel?

Switzerland’s Dahler to the rescue!

The stage one kit is fairly mild:  an ECU reflash up to 400HP for the 540i’s turbo engine joins a new quad-piped exhaust system with remote flaps for sport sonics.  Wheels and bodykit round out the mods.  Sounds subtle, but looks truly convincing.  The blacked-out grille and window surrounds are extra important for the hot new look.  This is available as ‘Shadowline’ option packs from the factory — but few/no wagons will come like that to dealer lots.  The matching gloss-black front splitter is sexy as hell too from Dahler.  Looks like OEM quality.

The parts work on both the sedan and the wagon, of course.

Top level of BMW individualization made in Switzerland
For the individualists – who appreciate the truly extraordinary – at Dähler Design & Technik GmbH in Belp near Bern in the Switzerland, a dream has come true: the 5 series Touring (G31).
As 5-series «dÄHLer competition line» the globally unique and comprehensive optimized version is instantly available and ready to launch.
The perfected 5-series business-station wagon in the dÄHLer version manifested what no one else offers – a lot of understatement, technical and visual innovation, or so to say (depending on the performance optimization), a true «devil in disguise».

Main topics of the 5-series Touring (G31) «dÄHLer competition line»:
• Tested according to the last Euro-6c-norm and CH-/EU homologated engine supererogation for 540i/xDrive (level 1 with 380 PS/560 Nm and level 2 with 400 PS/580 Nm)
• Further performance increases are in preparation/developement for the 550i, as well as for the diesel
models 520d, 530d, 535d and 550d (incl. Xdrive-models)
• Top-coordinated, harmonious and agile chassis-/wheel-combination «built by dÄHLer» with lowering and a firm, sporty-taut (but never hard) identification!

Something one must practice and experience…

The diversified portfolio for the new 5 series by dÄHLer at a glance:
• Output increases «powered by dÄHLer» for gas and diesel engines
• Stainless steel exhaust systems «built by dÄHLer» (2 or 4 pipe system)
• Active «sound-design & sound-engineering by dÄHLer», in preparation: first, genuine sound-design and sound-engineering with its own interface control unit (control electronic)
• Chassis components «built by dÄHLer»
• «dÄHLer CDC1» – the wheel developed and manufactured by dÄHLer in 20-/21-inch
• Aerodynamic components, in preparation
• Interior – also with the distinctive «dÄHLer-Touch», for example an individual speedometer with a display extension of up to 330 km/h, as well as the adjustment of the background illumination

For years, Dähler Design & Technik GmbH is also a highly skilled and competent partner for the purchase of a vehicle (mediation/agent): Whether to purchase or lease a vehicle of the 5-series – Christoph Dähler makes sure that his clientele experience an individual and professional consultation and jointly searches with them for the matching and eloquent model.