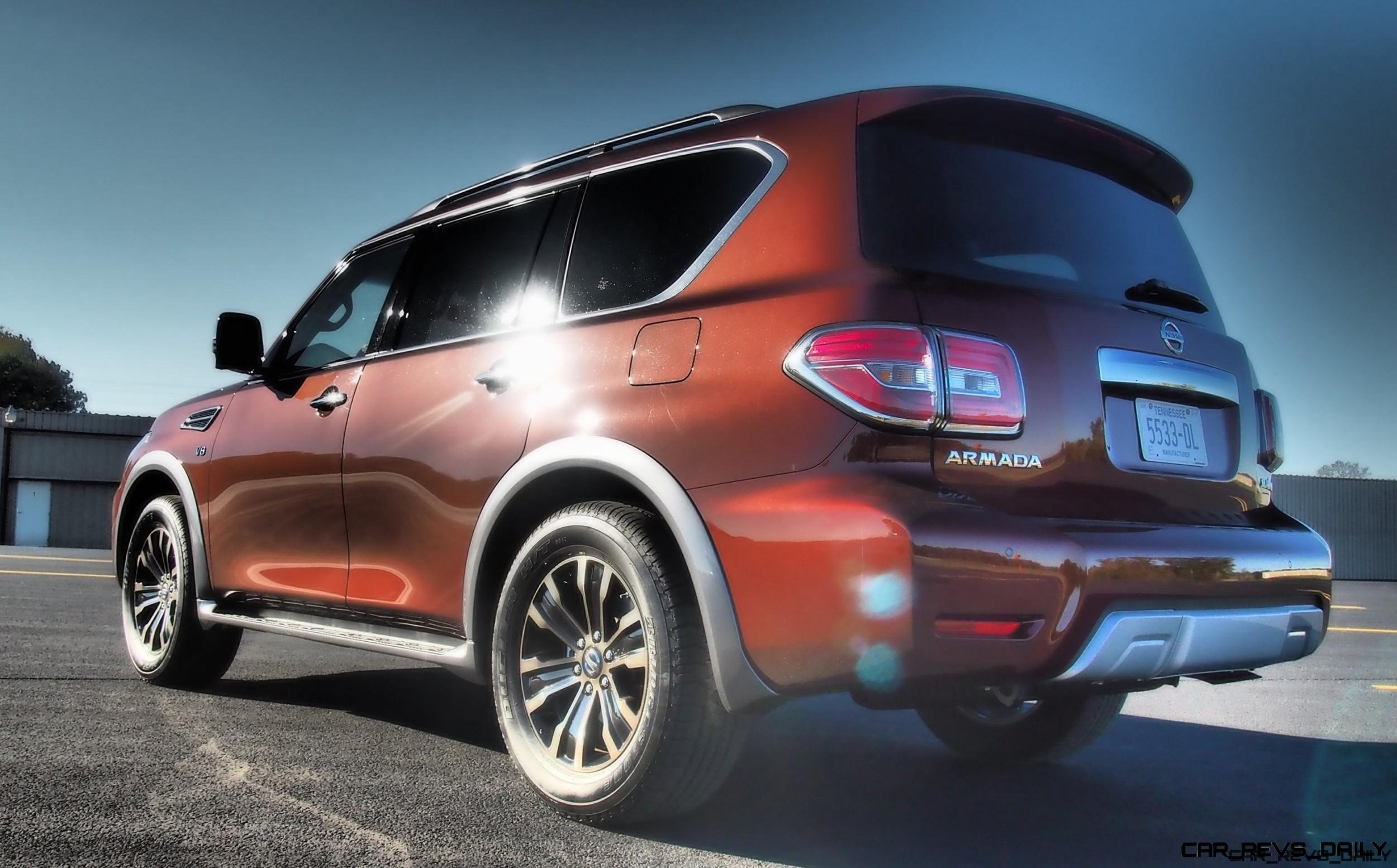 The big news with the second-generation Nissan Armada is this:

We finally got a Nissan Patrol in America!

Perhaps bigger news still is that the 2017 Nissan Armada, Nissan’s largest SUV, doesn’t drive nearly so large as it is.

Nissan does the SUV — bigly

Riding on a 121.1-inch wheelbase, the 6,000-lb. Armada measures 208.9 inches from bumper-to-bumper and straddles a piece of ground 79.9 inches wide. It stands 75.8 inches tall. It’s a large beast — not quite as large as the also new-for-2017 Nissan Titan, but close. Maneuvering in tight quarters may require your full, undivided attention.

Thankfully, Nissan has included its Around View Monitor, which does a good job giving the driver a bird’s-eye view of the vehicle while parking or backing. It can be engaged at slow speeds in forward gears by pushing a camera button in the center stack.

Fitting two carseat-occupying children in the middle row was no challenge. Our Armada tester was equipped with the Platinum trim and optional Captain’s Chair package, so the second row had a pair of bucket seats with a large center console. Fitting a rear-facing Baby Trend Flex-Loc car seat was super-easy. Meanwhile, the five-year old long-legged boy we carted around had plenty of legroom sitting on his booster.

While the first-generation Armada sold in the States was a U.S.-specific model, the new Armada is the same as the global Nissan Patrol. With that name comes a wealth of history.

The Nissan Patrol is legendary for its toughness. The first Patrol was built in 1951, and the model became a favorite of rugged individualists and even armies worldwide over the years. In later generations, it has morphed from its rough-and-tumble roots into a supremely luxurious — yet still very capable — SUV.

To that end, Nissan says the 2017 Nissan Armada we tested has a four-wheel drive system with two forward crawl ratios and a two-speed transfer case. Also, it features 9.1 inches of ground clearance, which taken in concert with its relatively short overhangs (for a full-size body-on-frame SUV, anyway), gives it respectable approach and departure angles of 20.9 and 22.3 degrees, respectively. The Armada’s breakover angle is 20.7 degrees.

A Jeep Grand Cherokee beats those angles, but it’s not nearly so large or, in most cases, as luxurious as the Armada Platinum we tested. If you want to bomb through the desert with up to eight passengers, the Armada would make a heck of a companion.

We weren’t so keen on the idea of taking this enormous luxury SUV off-road. Denting the Armada’s sheet metal, painted in tasty Forged Copper brown, was not on our “to-do” list. We suspect most Armadas won’t see off-road duty, but if snow or gravel roads are part of their routine, they’ll handle those conditions with aplomb.

Think of the Armada, or Patrol, as Nissan’s version of the Toyota Land Cruiser. That SUV similarly had humble, muddy roots and has transformed into Toyota’s largest, most expensive model. When compared head-to-head, the Armada whips the mortgage-worthy Land Cruiser on price — and the Nissan is bigger. Arguably, it’s no less luxurious than the Land Cruiser. Our tester had every option we could possibly imagine, from leather seats to 13-speaker Bose sound system, navigation, and a dual-screen rear-seat entertainment setup. Its MSRP was $61,735.

Getting this kind of luxury in the slightly smaller Land Cruiser could easily put six figures on its Monroney. And here’s a not-so-dirty little secret: Most new Land Cruisers aren’t bombing around off-road nowadays, either. Their wealthy owners use them to tow shiny new UTVs to the trailhead, perhaps. Because if you can afford $90K for a Land Cruiser (or even $60K for an Armada), what’s another $12K for a RZR?

Another place the 2017 Nissan Armada gives up nothing to its Toyota competitor: performance. The Armada may be assembled in Japan now instead of Mississippi, but the folks in Nissan’s Decherd, TN, engine plant produced its prime motivator. It’s a solid update to the 5.6-liter VK-series V8 gasser. Its numbers are up from 317 horsepower and 385 lb-ft of torque in the first-generation Armada to 390 horsepower and 394 lb-ft in our 2017 Nissan Armada tester.

Part of the improvement comes from Nissan’s move to direct-injection gasoline (DIG) powertrain technology, surely. With an 11.2:1 compression ratio and four valves per cylinder, it’s also a nice surprise that Nissan says the 2017 Armada’s V8 engine will make its rated power and torque on regular-grade gasoline. In an era where many engines feature high compression and turbochargers and therefore require premium fuel, this is refreshing.

In traffic, the 2017 Nissan Armada drives smaller than it is. Ask it to hustle, and it will oblige. The first four ratios of its seven-speed automatic transmission provide ample giddyup around town, with first gear being a super-low 4.887:1 ratio designed to get the Armada up on its legs in a hurry. There’s not a huge drop into second gear (3.17:1), then third (2.027:1), and fourth (1.412:1) before finally the transmission hits a 1:1 ratio in fifth gear. Sixth and seventh gears are overdriven, allowing for better fuel economy and more relaxed cruising on the highway.

An important part of this feeling of quickness comes from Nissan’s throttle tuning. Some manufacturers — here’s looking at you, GM trucks and SUVs — tune throttle tip-in so that the vehicle responds slowly to driver inputs. Others swing almost too far in the other direction.

Subaru comes to mind, with its aggressive throttle tuning that is jumpy at first but runs out of steam when the pedal is buried. Nissan gets it just right in the Armada, with throttle that responds neither too slowly nor too quickly.

The transmission does a good job reading inputs from the driver’s right foot, too, so the engine is never more than a second or two from its peak torque at 4,000 RPM.

That Nissan did all of this work to make the Armada quicker while also achieving slightly better fuel economy than the outgoing model deserves kudos. Just don’t expect to be all that surprised. The 2017 Armada in 4×4 guise is still rated at just 18 MPG highway, same as the first generation. Thanks to a bump in city fuel economy (from 12 to 13 MPG), the four-wheel drive Armada’s combined fuel economy score ticks up one mile per gallon, from 14 to 15, for 2017. In our mostly rural highway driving, 15 was about as good as it could do.

That’s not to say its competition does any better. That Toyota Land Cruiser we mentioned? It’s rated exactly the same as the Armada for 2017: 13 MPG city, 18 MPG highway, 15 MPG combined. Nobody gets into this class of vehicle expecting a Prius-sized fuel bill.

While the 2017 Nissan Armada is huge, it is deceptively quick and agile. Its 41-foot turning radius notwithstanding, the Armada doesn’t feel nearly so huge as it is once underway. That makes it less of a chore to drive than a great many of its competitors. Its relative bargain pricing within this segment of titanic SUVs is a bonus.

For those wanting a family-size luxo-cruiser capable of some serious cargo-hauling or even towing — it can pull a trailer weighing up to 8,500 lbs — the 2017 Nissan Armada makes a strong case for itself.

Disclosure: Nissan provided the vehicle, insurance, and a tank of gas for this review.

Lyndon Johnson is a husband and father of two who has now spent more of his life as a journalist than as a non-journalist. He serves as assistant editor at his hometown weekly paper in rural Tennessee and freelances in the automotive journalism world.