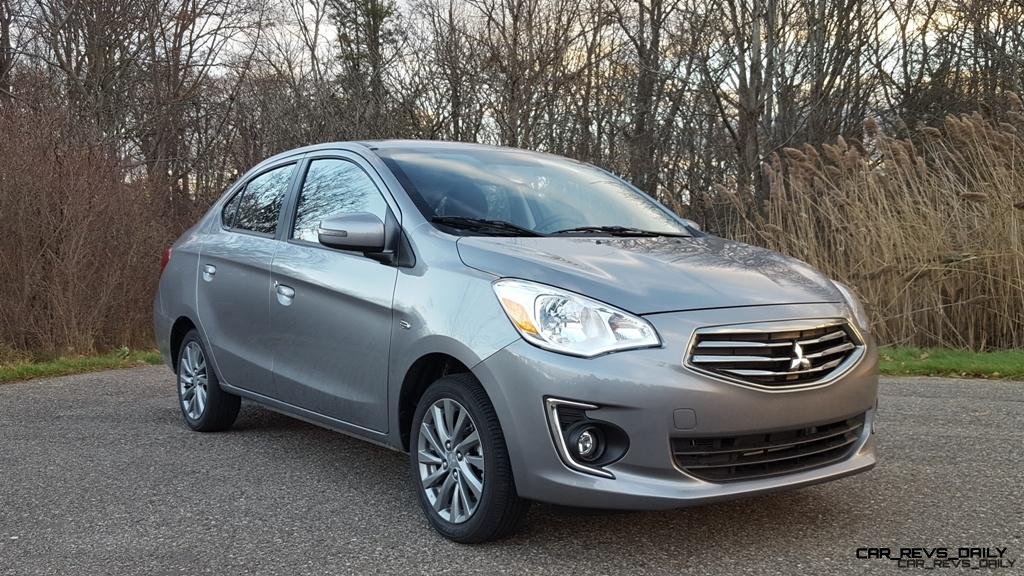 It wasn’t too long ago that the subcompact car segment was once relegated to bench warmer status in the lineups of many automakers. Due to the strong sales of SUVS as well as a relatively small pool of customers to take advantage of, many automakers did not put that much effort into them, and it showed in many ways (anyone remember the Chevrolet Aveo?….No?) Don’t worry your not alone. However, when gas prices spiked several years ago, the renewed demand forced automakers to invest in these pint sized offerings, and it helped transform the segment into a viable and competitive battleground. Mitsubishi aims to carve a small slice of this potent sales pie with the 2017 Mitsubishi Mirage. But has its recent round of updates transformed it into a truly viable contender in this hotly contested segment? Or is it still on the outside looking in?

When it first made its appearance back in 2014, the Mirage quickly became the proverbial punching bag for many publications due to a whole host of reasons. A chief one was its overtly bland exterior styling which did not stand out very well against some of its more mainstream rivals. Mitsubishi stylists tried to remedy this for the 2017 model year, and the results are mixed, and entirely depend on which body style you choose from. The hatchback looks somewhat sporty, and the rear fascia is a notable improvement over the old model which should please budget minded young buyers.

However, for sedan versions like our Mercury Gray G4 SE grade tester, the overall effect is somewhat blunted by its four door layout. The basic design is still a no frills affair, but the face lift has helped make the Mirage look more attractive. This is especially apparent in the front fascia which features a new grille, hood, headlights, and a tweaked front bumper. The rear fascia misses out on some of the hatchback’s bolder appointments, but the revamped taillights do look handsome, and add some stylish depth to the otherwise plain presentation. Our tester’s 15-inch dark chrome wheels are still on the small side when compared to other segment benchmarks, but they do look better than the hoops that once adorned its predecessor.

The interior of the Mirage is also a no frills affair, but does offer commendable levels of head and leg room. The cloth seats in our tester are on par in terms of the support they provide but did come with seat heat which proved to be a welcome asset in cold Michigan weather. The plastics here are still a step or two behind rivals, but the revised gauges and shift panel are welcome updates with the cluster including a much appreciated tachometer (a feature that was notably absent in the 2016 Yaris we recently tested.) Lastly our Mirage featured Mitsubishi’s touchscreen infotainment system which offered relatively lag free operation, and even came equipped with optional Apple CarPlay and Android Auto capability.

The Android Auto feature worked seamlessly with my phone, but it also helped highlight some of the ergonomic oddities that exist in the interior. For example the USB port that is needed to connect a phone to the system is buried in the glovebox versus the center stack, and was only found after calling the service department at my local Mitsubishi dealer for assistance. Our tester also came with push button start (a potent selling point) but annoyingly, the button is mounted to the left versus the more common right or center mounted placement. Lastly cabin noise in the Mirage is very noticeable especially at freeway speeds which is a shame since the stereo in our tester delivered solid sound quality.

Performance for the Mirage comes from a 1.2 liter three cylinder engine that delivers a rather paltry 78 horsepower. While this is a slight improvement over the 74 horsepower that defined the old Mirage, the lack of oomph is noticeable in virtually all driving situations with the engine loudly voicing its displeasure during acceleration. The fore-mentioned acceleration is leisurely at best and is not helped by the equally clumsy and optional CVT which can be pitched for a more conventional standard 5-speed manual. Mitsubishi claims that it also improved handling in the Mirage, but there is still too much excess pitch and body roll in certain driving situations, though the car did do a good job soaking up impacts from divots and bumps.

Despite its weak performance credentials, the Mirage does make up for this by offering very strong fuel economy figures with the three cylinder capable of hitting a lofty 35 mpg in city driving. The highlight piece however is its 42 mpg highway rating which is better than the Ford Fiesta as well as the Toyota Yaris in both sedan and hatchback form. These figures are also appealing for first time buyers that want maximum efficiency and are willing to sacrifice performance and attention grabbing styling to do it.

Pricing for the 2017 Mitsubishi Mirage starts at $13,995 for a base G4 ES with the standard 5-speed manual transmission. SE grade models start at $16,995, with the sticker on our option free tester ringing in at $17,830 thanks to the $835.00 destination fee. This is still less expensive than a comparable Toyota Yaris hatchback or Ford Fiesta, though both models offer more overall horsepower as well as a stronger service network for vehicle maintenance versus the noticeably smaller web of dealerships that Mirage owners can go to.

While the 2017 Mitsubishi Mirage is a notable improvement over the car that it replaced, There’s still progress to be made before it can be a true threat to mainstream sub-compact entries. Our advice for potential buyers is to go for the hatchback which is more practical than the sedan, and maximizes the visual appeal that the car has.