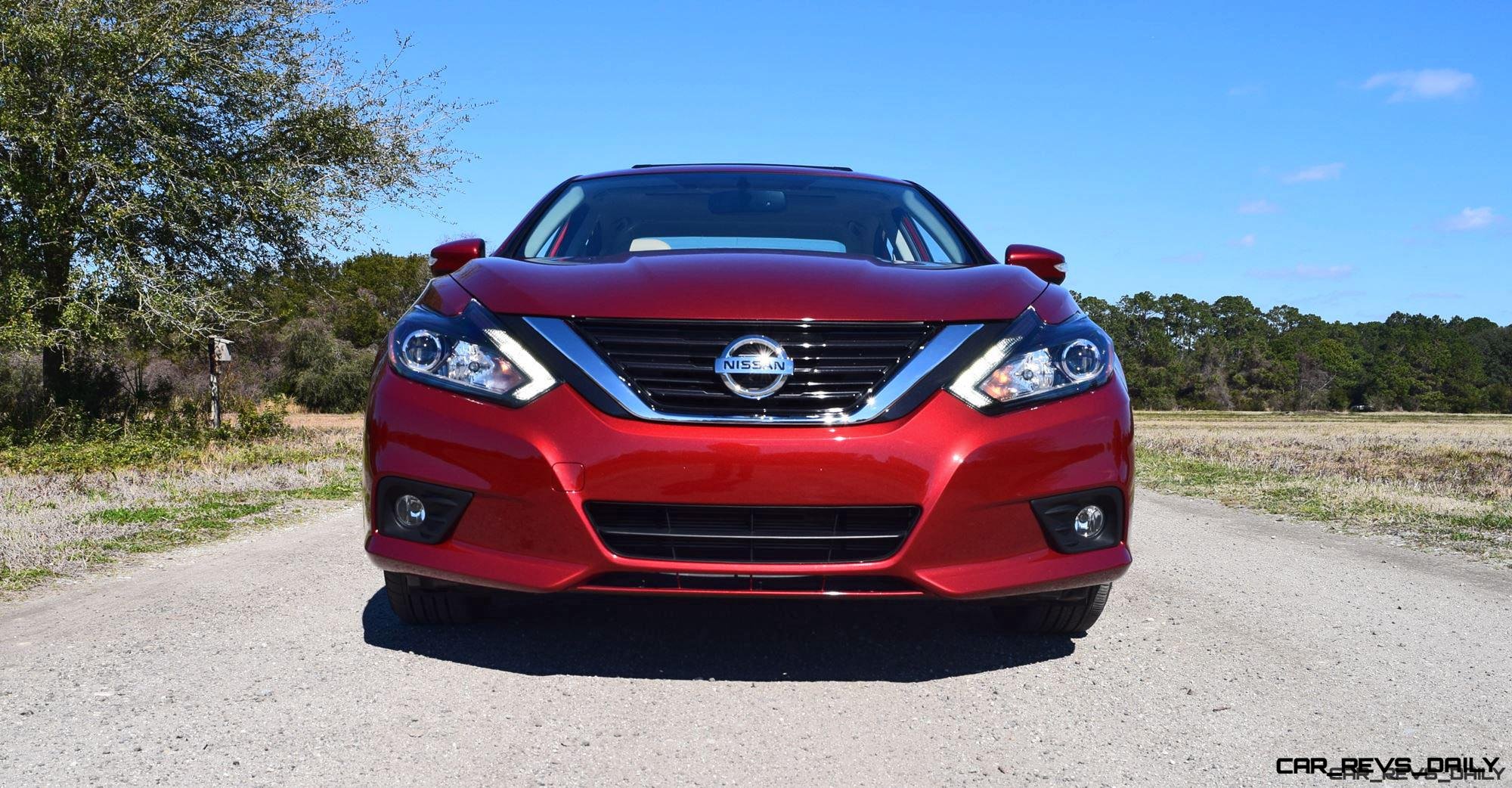 One of comedian Amy Schumer’s bits comes to mind as we sit down to write up this Altima review.

“You’d bang me, but you wouldn’t blog about it…”

The Altima is fresh for 2016 with a mini nip/tuck front and rear, updated tech and even more efficiency for the base 2.5-liter four-cylinder engine.

This update is a light refresh, and is part of the new automaker strategy of lowering product cycle times from around five years before to less than three now.  Technology and style trends are moving so rapidly that a four-year-old car is easily one of the most mature in the segment.

This applies double for mid-size sedans, which are experiencing big bites out of their sales volume from small crossovers and even big SUVs.

Is the Altima refresh enough to keep it top-of-mind versus the Camry and Accord?

Absolutely!  We have new respect for the Altima’s road manners thanks to this light style upgrade.  And testing the car back-to-back with the Volvo S60 Inscription drives the point home even further.

More than ever… there is little or no incentive to the premium or full-size sedan upgrades available at steeper prices.

We have a few dozen photos of the fresh Altima look, plus the standard Exterior, Interior, Performance, Pricing and Summary section headings.

Any car that sells more than 300,000 units a year will become very familiar, very fast in most city centers. The 2015 Altima certainly suffered from its own success since the redesign arrived around 2012.

The fresh looks front and rear are just the ticket to the 2016 Altima feeling fresh, and even bringing a bit of Maxima flair to certain angles.  Standard LED DRLs on all trimlevels are more than welcome

Looking at both the 2016 and 2015 models back to back shows how dramatic the new Altima face really is.  Where the old model was all toothy grin, the 2016 Altima has a much more serious face.  A much smaller grille overall is the biggest change, with the whole V-motion face just a touch of chrome over a mostly gloss-black housing.  The LEDs are mounted in-board and set the pointy new tone for the lower bumper shaping.

The lower intake is far smaller for 2016, with much more painted surface than before.  A new free-standing lower splitter even makes an appearance on the Altima for the first time.  The blinkers than were down below — beside the foglamps — are now integrated into the main lamp units. It cleans up the whole face nicely.

It is not exactly GI Joe butch, but definitely makes a more masculine statement on the road.   The drag coefficient certainly appreciates the new, smaller grilles and even active grille shutters: the cD frops from 0.29 to 0.26.  This is more than 30X more slippery to the air, improving MPG and cabin refinement markedly.

Around profile, there is much carry-over from the 2015 models in the glasshouse and overall metal shapes. But where the old model’s lights were pulled into the side view, the new Altima has a slimmer and more premium look for its more-compact lamps.

Darker-tone wheels for the same-trim SL in 2016 are very swish — with black inner spokes and machine-polished outer edges. They are chic even in the small-ish size of this mainstream cruiser.

In the tail, another all-new bumper, lighting and trunk face helps the car feel very fresh indeed.  We even got a vague sense of Infiniti-ness around the rear end. Not something you’d ever say about the outgoing car!

Finally, the new tail also integrates a painted lower diffuser piece, more prominent twin exhaust pipes and fresh brake lights.  These are damn near exactly the same shape as the new Camry, but are still big improvements over the 2015’s chrome-inside lights that are very unfashionable in 2016.

The new-for-2016 Altima SR model takes the style even more upmarket with giant wheels and some unique sportified details.  All where a pretty healthy swath of chrome trim from all angles, but even this is toned down markedly for 2016.

Overall, we say the new look is a winner. It might not feel as new in a few years… [who will!?  =] but is certainly enough to stay competitive with the new Accord Sport or Camry XSE.

The new Altima cabin is all about adding next-gen tech, safety and convenience features to the same, jumbo-sized interior of the previous-gen Altima.

That means the Altima is still huge inside up front, in the back seats and in the trunk.  There is so much airiness and head/shoulder room in the Altima… you feel like you could do arm circles easily.  The fairly tall roofline is an asset for entry and exit too: none of the head-clinking that happens in the Camry lately.

On first sitting, the 2016 Altima is instantly familiar and cosseting. The much-vaunted memory-foam seats are still immensely comfortable as supportive, and feel relatively plush even without the test car’s optional leather seats.

New standard info screens grace the base Altimas in 2016, while the 3.5 V6 and 2.5 SL models add more inches for their NissanConnect touchscreen unit.  With or without navigation, the new unit is much quicker and easier to use.  The backup camera is higher-res and clearer — making it useful even in the dark for the first time.

Laminated windshield glass is new for the 2016 model year, as is enhanced insulation and door seals.  Overall, the car is quieter and more refined than ever.

The Altima LOVES highway driving. More so than almost any other car in the mid-size or full-size segments.  The 2.5-liter four-cylinder and Xtronic CVT are a divine pair on the interstate. The inifnite gear ratios of the CVT automatic let the engine drop to a mute, distant thrum.  With cruise control set… the Altima becomes tranquil in a way most luxury-cars can;t match.  Certainly not the Volvo mentioned above!

The downside of this 39-mpg official rating on the highway?  Not much, to be honest.  And more than ever for 2016, the Altima delivers real-world mileage than is unbelievably good.  Even driven hard… we could not use more than a half-tank of fuel during the car’s stay with us for a week.  Seriously rare and impressive when driven like a test car….!

You have to go into the city to find some demerits in the Altima’s performance armor.

The initial pickup off the line is good and stronger than the base Sonata, Accord and Camry.  But around 20-mph, the 2.5-liter Altima does lose a bit of verve.  The car is smooth as glass even at its redline.  And you will appreciate that.  In angry-commute-style driving… the Altima does lack the big downshift of the Camry or Sonata’s traditional automatics.  While those cars are no more powerful… they do deliver more of a surge and traditional passing feel.

For the other 99-percent of driving, though, the Altima is a real gem.  It is so, so chill and calm at all times!   The overall effect lowers your heartrate and is remarkably good at calming even the most savage drivers after a few minutes.

As we said once before… the Altima feels like it was born at 90-mph.  And would live there happily — and effortlessly — its whole life.  That is rare in the midsize segment, where most competitors need to be seriously flogged to maintain that kind of speed.

The big nav option is $2200 to integrate nav and connected services via SXM — bundled into the SL Tech with LEDs package.  Adaptive cruise and forward emergency braking are part of this package — above and beyond the SL’s Bose audio, leather seats and power seats/mirrors.

Many other detail updates and upgrades for the Altima: one-touch windows, auto-dimming mirror, LED blnkers in the outer mirrors, and a fresh mid-cluster display screen in high-res between the main gauges. The SL trim’s $28,750 base price also adds heated front seats, steering wheel and leather-wraps for the shifter and wheel.  Subtle, perhaps, but will be much-appreciated over the life of the car.

The final option for the Altima SL tester were the $800 moonroof and $200 floormats– taking the as-tested price to $32,595, including destination charge.

If you value the excitement of a busy engine and razor-sharp handling of the Mazda6, it might not be.  But if you love being confident, relaxed and calm on the roads… then the Altima has few rivals.

Nissan has done a great job avoiding the Accord’s CVT curse — which is never calming down — and also delivering decent cornering feel on par with most Subaru Legacies.  All with a ride that meets or beats the Camry LE for smoothness and total isolation from bumps.

The 2016 upgrades inside make a huge difference as the Altima competes tooth and nail to be a top-three seller in its segment.  The exterior will work even harder on that count:  the new nose is actually really fresh and appealing versus the 2015 model.

The huge back seat and trunk are added bonuses… that make sure the Altima will happily fit you and the whole gang for your next cross-country, or cross-town, adventure.  For effortless, serene smoothness at all times?  Altima leads the pack for 2016.