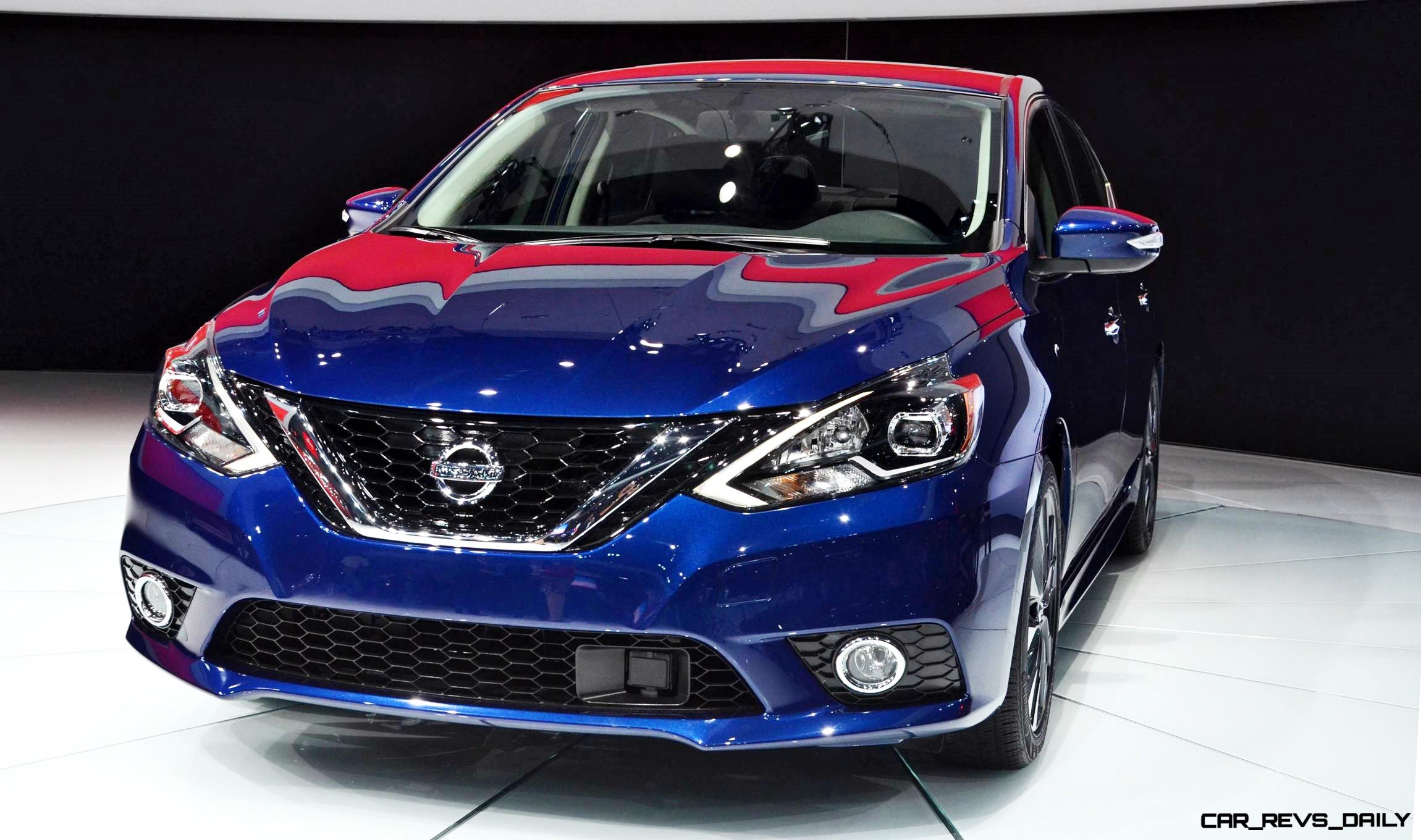 The Nissan Sentra compact sedan has achieved some impressive numbers over its more than 30 years and seven generations of production. In the United States alone over four million Sentras have been sold, with more than 93 percent of Sentras sold in the last 10 years still on the road today*. Sentra is also Nissan’s third best-selling vehicle, behind Altima and Rogue. And, since the introduction of the latest generation design in fall 2012, Sentra has experienced tremendous growth in sales and market share, making it one of Nissan’s fastest growing nameplates.

Now, to help keep the momentum going for the 2016 model year, Sentra has undergone a significant refreshening – starting with a revised exterior and the addition of an expanded suite of available safety and driving aid technologies.

The 2016 Sentra has a starting MSRP** of $16,780 for the Sentra S with 6-speed manual transmission. A Sentra SV with the Driver Assist Package, which includes NissanConnect with Navigation and Mobile Apps and the innovative active safety features customers highly desire and utilize on a daily basis – such as Blind Spot Warming (BSW) and Rear Cross Traffic Alert (RCTA) – is estimated to be priced at under $20,000. Full pricing on all grade levels and packages will be announced later.

“In what is turning out to be ‘the year of the sedan,’ Nissan has made major changes to our three best-known sedans – launching an all-new Maxima 4-Door Sports Car, a major makeover of our number one selling Altima, and now a redesigned Sentra,” said Pierre Loing, vice president, Product Planning, Nissan North America, Inc.

“A major element of Nissan’s ‘Innovation that excites’ philosophy is innovative styling that continues to excite buyers throughout the entire period of ownership,” said Shiro Nakamura, senior vice president and chief creative officer, Nissan Motor Co., Ltd. “The 2016 Sentra’s new exterior adds a sense of sportiness to the refined style and proportions, as well as adding a strong connection to the Nissan sedan and crossover family.”

As in previous years, Sentra’s exterior design is elegant, modern and refined, reflecting a “professional” character targeted at upwardly bound buyers who aspire to drive something more upscale than other designs in the segment. Exterior features include chrome door handles and chrome window accents and available heated outside mirrors with integrated turn signals. The coefficient of drag is 0.27 for the Sentra FE+S, 0.29 for S, SV and SR grades and 0.30 for the SL trim level.

A Roomy, Refined Interior Environment
The roomy Sentra interior has also been revised for the 2016 model year, with a new steering wheel similar to the Nissan 370Z design, a new available 6-way power driver’s seat with power lumbar (standard on Sentra SL and optional on Sentra SR), a new center cluster design, a new console and shifter knob, and refined seat fabrics.

For 2016, Sentra again offers ample roominess in a compact-size exterior – featuring one of the largest interiors in class, with 111.0 cubic feet of total interior volume. Helping make this possible is the long wheelbase (106.3 inches), which helps provide both ample rear seat legroom of 37.4 inches and large trunk capacity of 15.1 cubic feet. The rear seat is a standard 60/40-split fold-down design, adding versatility to the large trunk space.

“The high resolution of the new instrument panel display needs to be seen to be believed,” added Loing. “And, as always, Sentra’s interior spaciousness is unexpected and immediately apparent to occupants – even with the front seats in the rear-most position.”

The standard Sentra audio system is an AM/FM/CD system with four speakers and USB connection for iPod® and other compatible devices. Other available audio systems include a 6-speaker AM/FM/CD system with 5.0-inch color display. Also available is SiriusXM® Satellite Radio (SiriusXM® subscription required, sold separately), while Bluetooth® Hands-free Phone System is standard on all grades.

Advanced Connectivity and Safety Shield Technologies
The 2016 Sentra offers advanced technology features that help owners stay connected – including NissanConnect with Mobile Apps, which is standard on SV and SR grades and includes iHeartRadio, Pandora® and Facebook.

New for 2016 is NissanConnect Services powered by SiriusXM®. It offers emergency preparedness, remote access, customizable alerts and convenience services (SiriusXM® subscription required, sold separately). The system allows the driver to set customized alerts for family and friends – such as speed, curfew and boundary notifications. It is available on Sentra SR and SL grades as part of the Technology Package.

Intelligent Cruise Control (ICC) and Forward Emergency Braking (FEB) are combined as part of the new Technology Package offered for Sentra SR and SL grades. ICC uses radar to maintain a set speed and distance between Sentra and the vehicle ahead, even braking to maintain that distance.

FEB provides audible and visual warnings to help alert the driver of a potential collision with the vehicle ahead in the traveling lane and can help reduce speed if necessary. If a collision is unavoidable, the feature will engage the brakes to help reduce both the speed of the impact and the severity of the collision.

Blind Spot Warning (BSW) and Rear Cross Traffic Alert (RCTA) are included in the Navigation Package (SV and SR grades) and are standard on Sentra SL. The new Rear Cross Traffic Alert (RCTA) system utilizes radar to detect a vehicle approaching from either side of the Sentra when backing out of a parking space. The radar-based Blind Spot Warning (BSW) system provides an audible alert if the driver puts the turn signal on with a detected vehicle in the blind spot area of an adjacent lane and issues a visual alert if a detected vehicle enters the blind spot area in the adjacent lane.

“The 2016 Sentra brings a new level of available advanced Safety Shield Technologies  and driving technologies to our high-value Sentra,” said Loing. “This is also the most connected Sentra ever offered, including its new NissanConnect Services telematics system.”

The advanced 1.8-liter DOHC 4-cyinder engine offers a longer stroke than typical engines in its class, resulting in improved combustion speed and efficiency. The engine is equipped with a twin Continuously Variable Timing Control (CVTC) system which modulates both the intake and exhaust valve opening time (similar to that used on the flagship Nissan Maxima).

The engine’s internal friction has been reduced (versus the previous design), improving efficiency. In addition, the valve springs are shaped similar to a beehive, with a smaller diameter towards the top – reducing inertial weight, improving valvetrain efficiency and smoothing engine operation. The engine is rated at 130 horsepower and 128 lb-ft of torque.

The Xtronic transmission offers a wide gear ratio range of 7.3:1 through use of a sub-planetary gear and smaller pulleys, resulting in high-speed fuel efficiency and responsive acceleration.

The Xtronic’s acceleration feel is enhanced with a D-mode step shift program that simulates shifts, giving a more natural acceleration feeling without holding a high rpm constant, letting rpms build as speed builds. For 2016, the D-Step Logic Control has been revised to help provide enhanced drivability with a more stable, natural and crisper shift feel (versus the previous design).

The 2016 Sentra also delivers enhanced performance and handling through a retuned suspension design featuring a 10 percent increase in spring and damper rates (from the prior model year), as well as enhanced body stiffness for improved roll and body control through adoption of a new front tunnel stay similar to that used on the JUKE NISMO RS. The Sentra suspension features an independent strut front layout with stabilizer bar, torsion beam rear axle with integrated stabilizer bar.

Steering feel and response has also been improved through use of optimized Electric Power Steering (EPS) mapping in conjunction with the revised suspension and new tire design. A power-assisted vented front disc/rear drum braking system (4-wheel disc brakes are available) is standard along with retuned vehicle-speed-sensitive electric power steering.

A Range of Well-Equipped Models
The 2016 Nissan Sentra is offered in six models: S 6MT, S Xtronic, FE+ S, SV, SR and SL. “The new 2016 Sentra has more content and greater value across the range of six well-equipped models,” added Loing. “And, with a number of special option packages, it’s easy to configure just the right level of features for every driving preference and budget.”

The 2016 Sentra is assembled in Aguascalientes, Mexico.