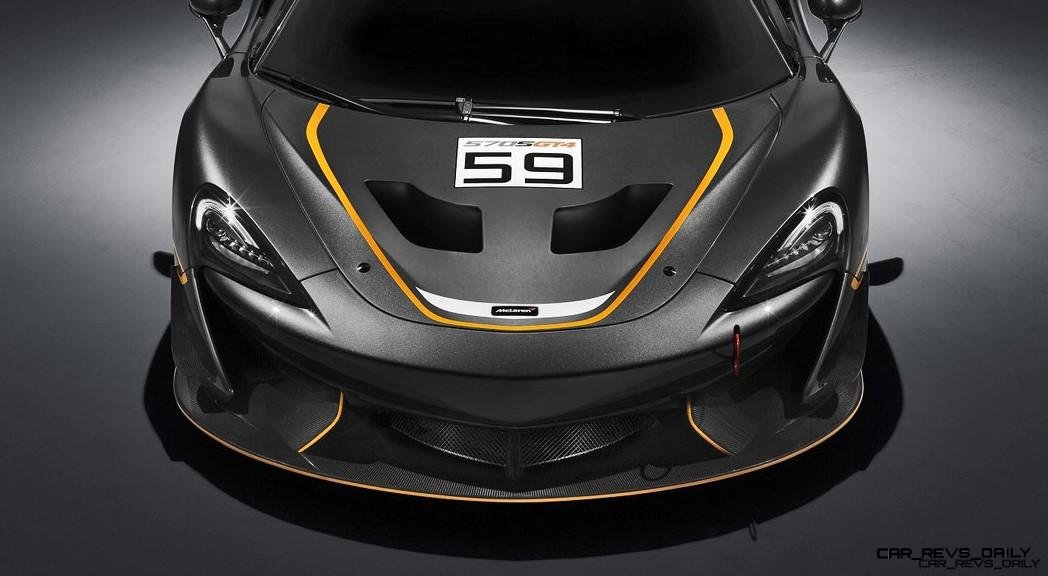 McLaren just revealed its racecar versions of the new 570S: the FIA-approved GT4 model that is ready to go racing worldwide right from the factory.  And the real star?  The 570S Sprint~!

The Sprint is our favorite because it is so pure.  The GT4 car’s aero upgrades, de-restricted engine and exhausts, Pirelli slicks and beefed-up race suspension…. but without the GT4’s standard roll cage, fire extinguisher and other mandatory elements.  Such things like power restrictors are needed for the GT4 class… but not in the 570S Sprint!   That means less weight for trackday individuals versus race teams.   Estimated weight savings in Sprint vs GT4?  At least 250-pounds.

The Sprint can be upgraded to GT4 spec post-sale, however, if you do decide to chase some race podiums.  The Sprint and GT4 cars look identical outside, we believe.

Why 570S versus 650S GT3 race-cars for customer motorsport teams around the world?  The 570S GT4 is slightly smaller, more nimble and far easier to enter and exit.  This would be extra handy if driver changes are an issue… or if the 650 racecars are not focused enough. Those cars have almost too-broad a remit:  low-speed corner pace as well as 200-mph top speeds = slightly unfocused proposition.  The 570S will be a cheaper, more concentrated alternative.  One whose cheaper (160k Pounds) price will make it more attainable, raceable and maintain-able.

All that is what makes the latest McLaren feel like one of the greatest.

Woking, UK (March 15, 2016) – McLaren Automotive has confirmed two new track-only models of the recently-launched Sports Series with the introduction of the 570S GT4 and the 570S Sprint, developed in conjunction with the motorsport division of the Woking brand, McLaren GT and GT racing specialists, CRS GT. Limited Unveiled ahead of its final development phase, the GT4-specification model will take on an intensive season-long development program in the British GT championship. McLaren GT and CRS GT Limited will work with recently confirmed customer team Black Bull Ecurie Ecosse throughout the season, with the 570S GT4 contesting the full nine round calendar. The program will be the truest and most rigorous testing schedule in live race environments. Echoing the previous models to wear the Sprint badge, the 570S Sprint will be unrestricted by racing regulations and dedicated for trackdays, but upgradable to a full GT4 specification. Further details of this model will be confirmed in the coming weeks.

In addition to the confirmation of the latest Sports Series models is the appointment of Ansar Ali to the role of Motorsport Director for McLaren Automotive. The newly-created role highlights the key focus on motorsport for the brand, and Ali will be responsible for the on-going strategy and management of motorsport activities moving forward.

Commenting on the latest additions to the Sports Series, Mike Flewitt, Chief Executive Officer, McLaren Automotive explained, “As with the road-going models to wear a McLaren badge, the 570S GT4 and 570S Sprint models are about being an engaging and exciting drive. The launch of the Sports Series has broadened the McLaren brand to a new audience, introducing technologies to the sports car market and to a new group of customers. The introduction of the 570S GT4 is doing the same in the motorsport world, and will bring the opportunity to own and race a McLaren – previously limited to a very small number of people – to a much wider group.  The decision to run the car in a live race environment has been taken to ensure the data retrieved is as accurate and optimized as possible, and it will ensure that the cars eventually delivered to customers have been tested to the extremities of how they will be raced. This program will also provide key information and form the testbed for the 570S Sprint model which, as with the previous Sprint models, will not be subject to the rules and regulations of any specific race series.” He added, “I am extremely pleased to welcome Ansar to McLaren Automotive in such a key role. Motorsport is part of the lifeblood of the McLaren brand, and this role will be key to our long-term plans as we continue to expand the product range and customer-appeal around the world.”

Ansar Ali, Motorsport Director, McLaren Automotive added, “I am extremely proud and honored to be joining McLaren Automotive at such a pivotal time for the brand. Activities on track have played such a significant part in the history of making the brand as globally recognized as it is today. The opportunity to play a major part in shaping its future motorsport strategy is extremely exciting, and the 570S GT4 and 570S Sprint models are an important initial step.”

Commenting on the program, Andrew Kirkaldy, Managing Director, CRS GT Limited added, “The 570S GT4 marks a key development of McLaren as a player in the motorsport world, opening the opportunity to race up to a much broader skill level of driver. With the 650S GT3, which raced competitively for the first time last year, there was a focus on drivability and the performance envelope was easier to access and exploit. The results speak for themselves, and the 570S GT4 model takes this to the next level and provides drivers the confidence and feedback to push and exploit the boundaries of what the car can do.”

The track-only 570S GT4 shares the carbon fiber MonoCell II chassis architecture with the other models in the Sports Series. This marks the first time the technology has been made available in the GT4 category, and the race-derived material is of clear benefit with inherent strength and light weight. Driver protection is further enhanced with the addition of an FIA-approved rollcage and fire extinguisher system. Carbon fiber and aluminum are used for the reprofiled bodywork, which is formed over wider track front and rear to accommodate center-locking lightweight cast magnesium alloy wheels shod with slick Pirelli racing tires. Two-way adjustable motorsport dampers with coil-over springs are fitted front and rear, and an on-board air jacking system is fitted as standard.

With a pure focus on laptimes, the 570S GT4 features a unique aerodynamic package which includes a GT4-specification high level rear wing, mounted on aluminum pylons, a larger front splitter and reprofiled floor assembly. An additional front center high temperature radiator sits below a GT3-inspired bonnet with radiator exit ducts. These upgrades have been designed to optimize the aerodynamic performance and cooling of the 570S GT4 to ensure it is able to perform in the harshest race conditions globally.

The McLaren designed and developed 3.8-liter twin turbo V8 M838TE engine is carried over from the road-going Sports Series model. The seven-speed seamless shift gearbox is also familiar to the other models in the range, transferring power to the track via the rear wheels.

Black Bull Ecurie Ecosse will run one example of the 570S GT4 alongside the confirmed entry of the 650S GT3 with Factory Driver Rob Bell alongside Alaisdair McCaig. Driver details for the season will be announced shortly.

The 570S GT4 will make its public development debut at the opening round of the British GT Championship at Brands Hatch, UK over the weekend April 16-17. Going forward, it will be eligible for all GT4 homologated championships globally from the 2017 season, and is priced from £159,900 (ex works).

Further details for the 570S Sprint, including pricing, will be confirmed in the coming weeks.