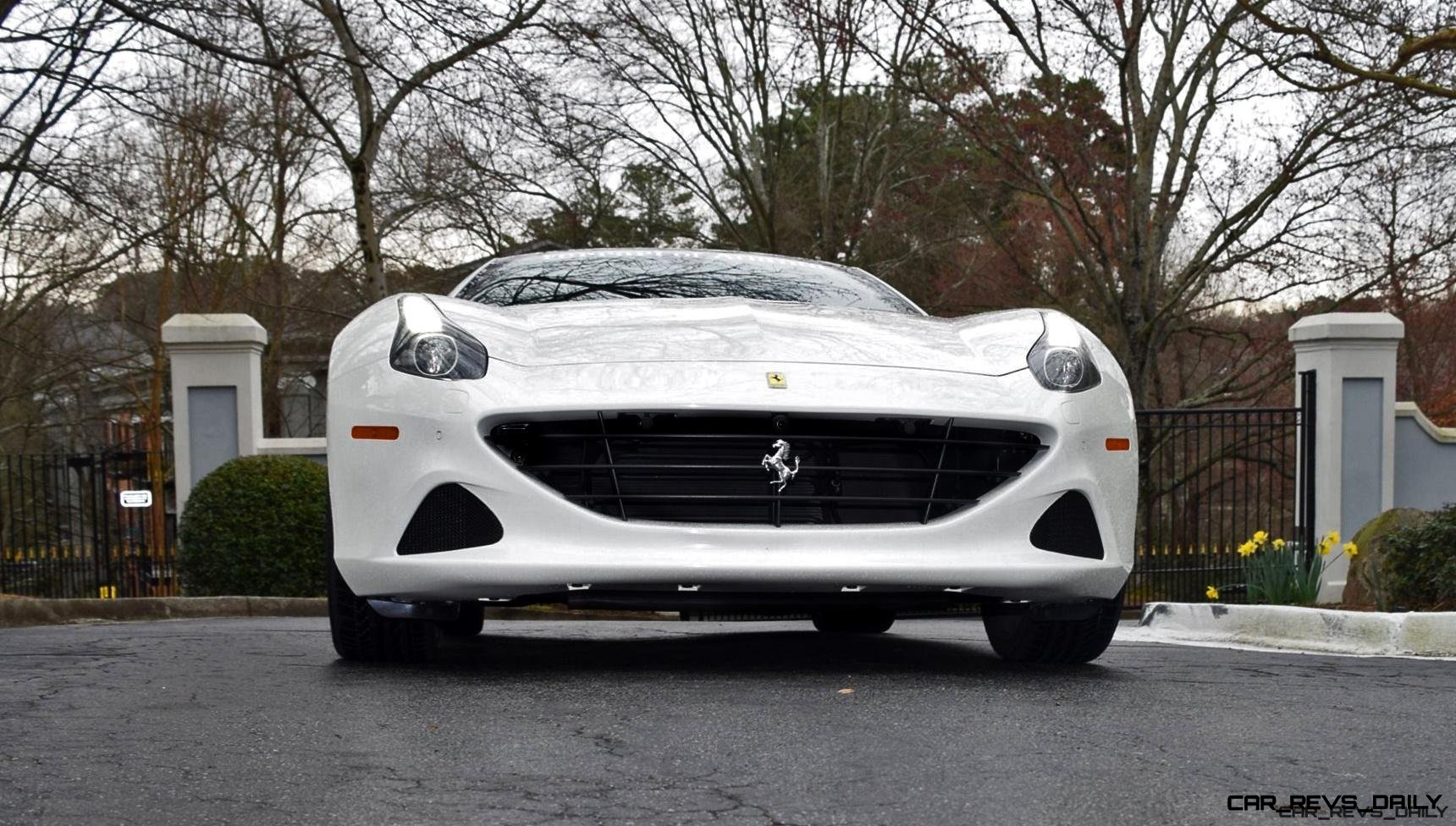 Any chance to drive an all-new Ferrari is enough for an epic day off.  What fantastic fortune!

The 2016 California T is the facelifted and engine-swapped update of Modena’s only 2+2 cabrio.  Its $205k base price actually makes it the cheapest model in the 488, F12 and GTC4Lusso range.

The numbers and noise coming from the twin-turbo 3.9-liter V8’s quad central pipes are definitely not entry-level, however!

The new turbo drivetrain definitely delivers warp speed… but in a slightly delayed way that betrays this car’s split soul.

Love-at-first-drive in the Ferrari California T?

Let’s find out why this car’s conflicted mission damns it with faint praise.   Exterior, Interior, Performance, Pricing and Summary, per usual.  100 new photos and a startup video to join the fun.

There are some solid color and wheel recommendations in here… beyond the pure critique of the car’s looks.  Which are… very Corvette-ish from many angles, and in many details.  Is this a deal-breaker for a car competing with the new SL, many Aston Martins and especially the Bentley Continental GT V8S?

Closer detail looks show the stacked, cool triangular intakes in the nose.  Much wider look for the lamps and more definition for the sharky hood/grille combination.  Deep sculpted outlets in the fenders and hood are classy and touchable.   With the bi-xenon projectors lit up… there is that chic vertical line of light from both outer edges of the Ferrari face.

There is great variety in the Cali T’s face this year.  A black grille, Handling Speciale dark grey or bright chrome slats are just some of the varieties.

Those reco’s?  A medium or dark color tone is helpful to hide the many shutlines of the folding hardtop — in a way that the white pearl paintwork of the drive car could not.  Also, we vote on the new Blue shade with the polished-face alloys.  These are much darker, meaner and more modern than the bright silver alloys on the white example.

Most of all, the California T is a stunning beauty of a supercar.  The only disappointment at seeing five or six beside one another?  Just the slight lack of crotch tingle?  The intimidation factor is still huge thanks to the badge and price.. but overall seems curiously asexual.

Even with the new nose and grillework up front?  Yes.  The car is indeed new from all sides.  But the nose is still…. very angle-sensitive.  The 250 GTO-style retro inner grille as the car’s face can wash out at times into pure Corvette sometimes.  The proportions are also quite similar.  This is a style achievement for the Cali Turbo, actually, because the C7 is much lower and slightly wider than the Ferrari.

The long-hood proportions come together beautifully around the profile and tail angles of the car. This is certainly new for 2016 — no more awkwardness around the clamshell folding hardtop.  Deeply sloped windshield and (relatively) large 2+2 cabin.

Flowing smoothly into a flush rear trunk with new 3D LED rings for the updated model.

These rings sit proud of the bodywork right at the upper corners of the car in a sexy, classy way.  Nice.  Because they are part of the moving trunk assembly — that works in Drive and at low speeds — they are the nighttime running lights.  Inside the carved-out red circle of light?  A hidden white LED for backup functions.

The actual brake lights are down below in the California T’s lower flanks.  It is a wide look that is dripping with light.

Best from the back!  That also applies to the exhaust note discussed below…

The cabin of the California T brings some serious luxury, and is a huge hit!  Massively comfortable but supportive seats, one-button roof operation up or down, and even vestigial rear seats to pop in the day’s shopping!   Up for down in less than 20 seconds.. and something that earned us a few thumbs-ups in traffic around Atlanta!

The trunk still fits two rolling suitcases easily with the top down, by the way, thanks to its lower floor and huge aperture.

The white/blue color scheme of the test car is classy and Monaco-chic.  Especially with the top down!  (We like the dark-roof choice for our personal dream Cali T…)

But as it strutted for our drive, the white makes the blue pop — right down to the matching brake calipers.

All that luxury is in sharp contrast with the ultra-high-performance carbon shifters, wheel, dash and center stack elements.  And how does one move off from a start?

Just a few buttons for D, S or R and a snick in gear… and we’re off!  Driving a brand-new Ferrari.

In what we can’t resist calling… Tom Burkart’s Day Off! caption: Like a fat white Urkel… did i do that

There is no Ferris Bueller charm about this harsh truth.

Standard paddle shift in the Cali T is one of its biggest flaws.

Grabbing first gear via the right paddle to set off is easy to learn.  But finding “Park” is what more people will wonder.  Just turn off the ignition and it is automatic, we’re told.  Full auto drive modes for the DCT too, in the sense that it will shift for you. Not in a fun way, though.

The seven-speed dual-clutch transaxle is surely fantastic in the right conditions — like a big-boost clutch drop or the integrated launch control. It is rapid and smooth in its moves, especially so around town and in parking lots. This is helpful.

And the simplified manettino switch does offer holistic Comfort/Sport/Snow settings for everything — in just one knob twist.

Our problem comes in the California T’s main automatic drive modes.  This is clearly how the car will be driven 99-percent of the time by owners.  But even in Sport, the Cali T refused to kick down for a passing simulation.  It eagerly shuffles up to too-tall gear ratios and did so throughout our drive time.  This was explained as ‘they car needs to be driven on paddles’ to make it sporty.

And that is certainly true!

Like an F40 on full boost… the California Turbo lights up at high revs!  It lights up the tires, our hearts and minds in boosted G-force heaven.  But the boost is slightly laggy in automatic-Sport mode.  The car is waiting for active paddle activity before giving up its powerful goodies.

With a snick into second gear and full throttle, the 560-horsepower comes on HARD near 5000-rpm.  This is only half-way up the tach of this high-revving turbo V8’s range.  The engagement has that fantastic NOS-style feel.  Like in a movie when the chase scene’s film is sped up — dramatically.

A bark out back is the first we’d heard of the exhaust.  Despite sounding awesome outside the car…. we did not love the sonics in our admittedly-brief city drive.  Even so, these types of skyscraper canyons typically make a Lambo or Porsche’s engine notes bounce around nicely.

The California Turbo is new for 2016 and is available now. The Ferrari Art of Speed Tour is running nationwide for the next few months – check online for dates near you, or to book a regular test drive.

Very quiet, then, for the Cali T inside.  And very, very easy and mellow.  Once you learn the Drive initiation of the exotic PRNDL stalk… the California T drives as smoothly and easily as a 535i.

It is too calm, though.  It is not scary, just compromised.

The throttle map in automatic-Sport mode should really make the car come alive when you floor it.  This just seems like good tuning?  Corvette, F-Type R, S63 AMG Cabrio, any Bentley….

These are chill cars that can go HARD at any time. Any moment you wake the beast.

Alas, the California T doesn’t really deliver on either of its missions.  It is supposed to be easy to drive. It’s not.  It should be twice as exciting as any Vette or Jaguar, let alone any DB9.  But it is not.

On a brave sunny day up the mountains… I’m sure this car would come to life in full glory.  But we drove the car in its likely habitat… and came away ready for a nap more than any galavanting onto a parade float to sing Danke Schoen.

Regretfully, even the hooligan valets from Ferris Bueller are not likely to have put many miles on this California.