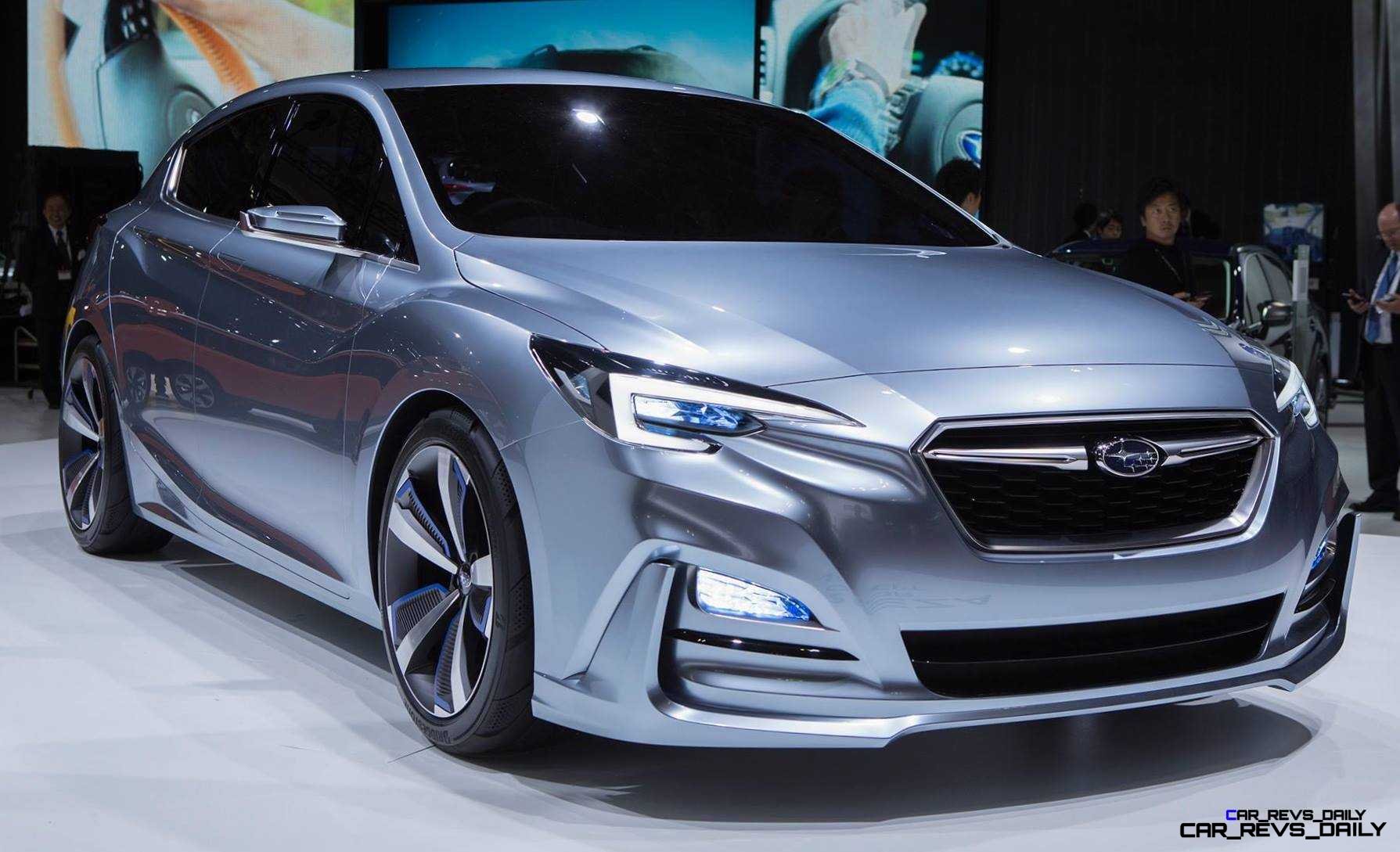 Subaru is really growing in leaps and bounds! No better evidence than a frankly packed Tokyo stand from the once-humble maker of AWD mountain cars.

Joining the all-new VIZIV Future Concept on the stands is the also-new Impreza 5-Door Concept.

While the new WRX still feels very fresh, it is always good to take a sneak peek at the next-gen design vision for the product.

Since the WRX and Impreza lineups were formally divorced in this generation in the US, the XV Crosstrek has taken on a bit of an entry-level role in the Subaru range. But this is traditionally best occupied by a budget compact bearing the Impreza name.

This new model will be leaner than car’s lux and roomy siblings on price as well as pace — so its design is taking a firm step toward the future to create a unique market position for the 5-Door.

A production variant is perhaps a year off still, with the 5-Door not yet confirmed for the US or any markets outside Japan, the something of a ‘given’ for Impreza 5-Door sales as the home market of Subaru.

Also joining the JDM scene for 2016? The new S207 pack for the WRX STi, plus an even-more-hardcore and tasty NBR Challenge package. This special kit features a variety of stunning gloss-black aero pieces all around, contrasted with three color options for the hottest-yet road special of the current STi generation.

Check out the showfloor photos of the latest Subaru models below, plus the tech and equipment specs of the NBR Challenge pack toward the end of the page.

Tokyo, October 28, 2015 – Fuji Heavy Industries Ltd. (FHI), the manufacturer of Subaru automobiles, today unveiled the “Impreza 5-Door Concept” at the 44th Tokyo Motor Show 2015.
The Impreza 5-Door Concept is a design concept car previewing the next-generation Impreza which is to be the first one of Subaru’s next-generation strategic vehicles envisioned in FHI’s Mid-Term Management Vision “Prominence 2020″ announced in May 2014. While positioned as an entry model in the Subaru lineup, its compact body features a blend of bold expressions of Subaru’s Dynamic & Solid design elements and a quality feel beyond its class – hinting at the design direction not only of the new Impreza but of Subaru’s future models as a whole.

Main Features of Impreza 5-Door Concept
The front, sides, and rear are seamlessly joined in the Dynamic & Solid surface structure, creating a three-dimensional and solid body that is a feature of Subaru styling. The dynamism is enhanced by well-placed character lines on the 5-door style compact body shape. The design expression of “Enjoyment and Peace of Mind”, the value that Subaru provides to its customers, is fully pursued within the limits of the C-segment body size. In the area of functionality essential to a Subaru car, excellent aerodynamic performance is achieved while blending this functionality into the styling. The sense of quality is raised by the choice of high-luminance silver, having the genuine luster of metal, as exterior color.

• Front
The Subaru look is seen in the Wide & Low stance with its sporty impression, and in the unified three-dimensional structure extending from the hexagonal grille that symbolizes the Subaru identity to the hawk-eye headlights. The front face plays the role of starting point from which the front flows via the sides to the rear, with each part uniting into a solid form.

• Sides
The rich inflection of the character line extending from the front fender to the door panels and rear shoulder, and the line rising energetically toward the rear from the lower door panel, give dynamism to the solid body surface. The powerfully extended fender flares express the reliability of Subaru All-Wheel Drive.

Tokyo, October 28, 2015 – Subaru Tecnica International (STI),*1 the motorsports division of Fuji Heavy Industries, will launch a limited-edition model based on the “WRX STI” on December 1, 2015. Just 400 units of the model, dubbed the “S207”, will be available.

Taking the WRX STI as its base, this complete car from STI features exclusive engine and suspension tuning as well as distinctive interior and exterior design. Embracing the STI concept of offering the ultimate in road driving, the S207 stands at the pinnacle of the STI complete car lineup and aims to be the world’s most enjoyable vehicle, providing a feel-good experience to all those who travel in it regardless of road conditions and enhancing driver skill.

Special engine tuning boosts maximum power output to 328 PS. Handling is enhanced by a quick steering-gear ratio of 11:1, the addition of original STI components including a flexible tower bar, DampMatic® II front suspension with adjustable damping (a first for a Japanese automaker), and front-rear Active Torque Vectoring, all of which combine to achieve a strong yet flexible ride and sharp cornering. Driving performance has also been enhanced with Brembo 6-pot brakes in front and 4-pot brakes at the rear, both featuring monoblock opposed-piston brake calipers and drilled rotors (2-piece type in front); specially designed 255/35R19 tires; and an exclusive large front spoiler. Special design elements serve to heighten driver anticipation and the joy of ownership, from the rear-bumper air outlet on the exterior to exclusive STI-spec Recaro front bucket seats and customized sports instruments on the interior.

The S207 is available in three body colors: WR Blue Pearl, Crystal White Pearl, and Crystal Black Silica. Additionally, a 100-unit limited run of the “NBR Challenge Package Yellow Edition” in vivid Sunrise Yellow will be on offer as a special model.

*1：Subaru Tecnica International Inc. (President: Yoshio Hirakawa; Mitaka, Tokyo)
*2：A class for turbocharged vehicles up to 2 liters.
*3：The Yellow Edition must be ordered by November 30, 2015.