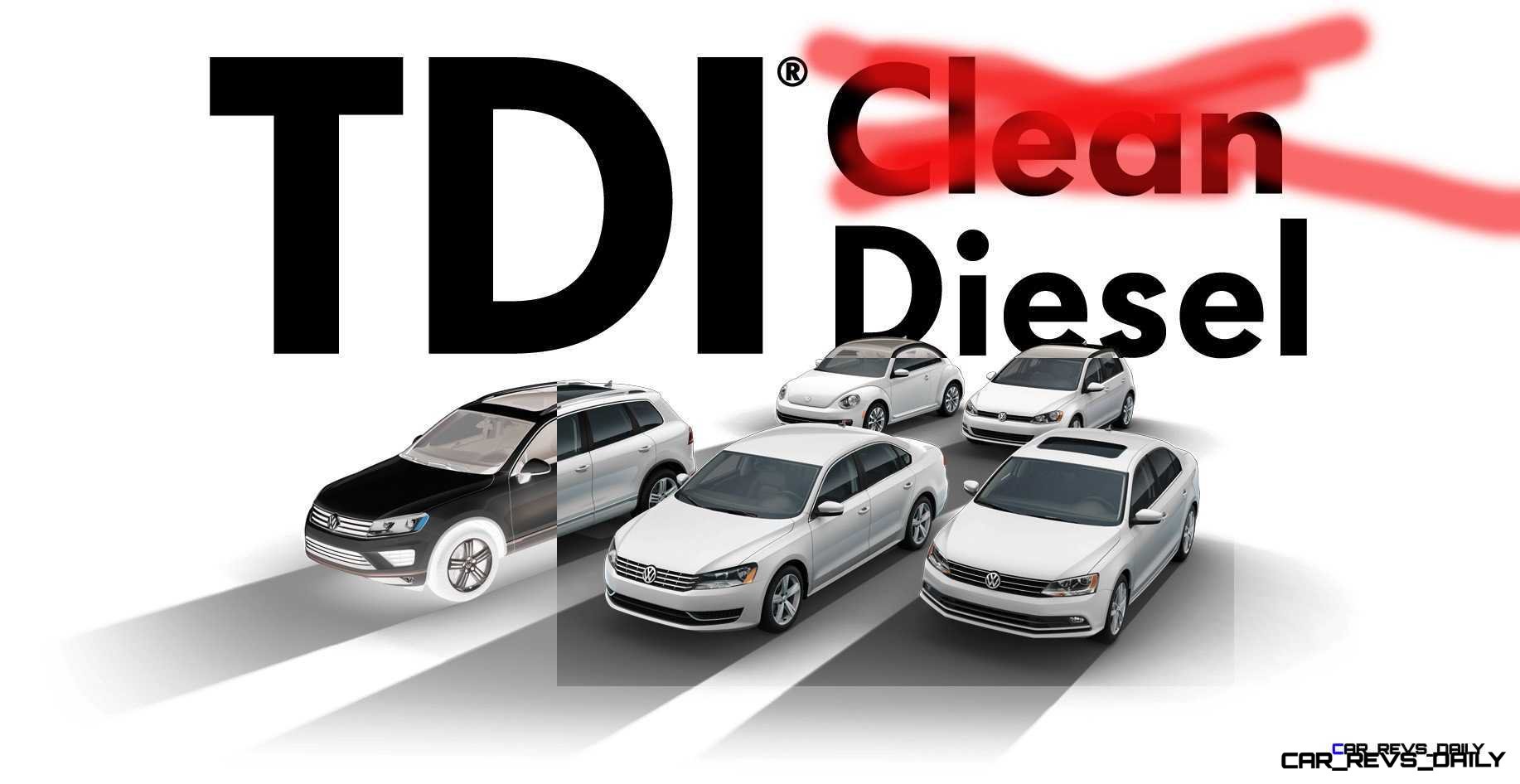 The EPA’s legal “notice of violation” to Volkswagen of America is deathly serious. And, as we predict below, will lead to TDI models being pulled from US showrooms almost immediately — as soon as this coming week.

Unlike recall notices to fix even serious safety issues, a willful violation of the Clean Air Act would incur significantly higher monetary damages than a typical recall. Even the Takata airbag scandal is not this alarming. Max fines per vehicle sold in this instance are cited by Bloomberg and Business Insider as $37,500. Per vehicle. Times nearly 500k cars, that would total a whopping $18-billion in fines.

That headline figure is gob-smacking at first. And would likely be fought vehemently in court by VW, and brokered down to a lesser fine eventually. But devastating press for years and years is a certainty however the saga unfolds.

$18-billion sounds crazy for overstating the cleanliness of the TDI engines sold by Volkswagen and Audi in the US.

But look deeper into the complaint. You find that the claims are not like Hyundai-Kia’s mileage stats, where just a sales advantage was the result. This allegation would make VW diesels unable to be road legal in the United States, and especially California.

In the EPA and CARB legal notices,  you find data suggesting the TDI Clean Diesel engines emit between 10 to 40 times the maximum allowed amounts of NOx in normal driving. The vehicles were able to pass EPA certifications thanks to special software cheat codes that were able to determine when an emissions test was being performed. When the TDI knew it was being tested, it employed its full suite of emissions tech.

How could it ‘know’ when a test was occurring?   The ‘defeat’ mode could kick in during a typical smog test using a rolling road — two giant drums that let the drive wheels spin with scientific resistance levels, but keep the actual vehicle in the same place.

So when the TDI has wheels moving but no G-forces from actual vehicle movement, the system allegedly only emits minimal tailpipe emissions. In normal driving, with G-forces active, the engines then deliver their advertised power and performance. More-sophisticated diesel powertrains with dedicated Urea after-treatments are significantly more expensive than VW’s TDI engines in the US. This includes the TDI in the Touareg, but not the Beetle, Jetta, Passat, Golf and Audi A3 cited in the legal notice.

The complaint appears to focus exclusively on the Volkswagen 2.0-liter turbodiesel with engine codes of CBEA (2009) and CJAA (2010+).

The sooty diesel pollutant in question is NOx — a seriously harmful chemical and VOC — a known carcinogen and arguably more important than carbon emissions in terms of human health.

This TDI scandal will be extremely damaging for VW globally. In addition to criminal charges, the fines will be legendary. The costs to owners significant: the values of TDI models on the resale market will fall overnight and never recover.  Potential worldwide ramifications exist because VW’s most-important market, China, is battling pollution and has millions of even-more-toxic TDI VW’s in all its major cities.  A class-action lawsuit by owners would allege consumer fraud, and potentially even medical complications as a result of excessive pollutants. Any bodily harm obviously would make the damages levied far more painful for VW balance sheets as well as brand image.

In terms of corrective action, there will be no winners here. At estimated $10k for a new drivetrain for every VW or Audi included, the time and cost are still astronomically high. And will take time to resolve both regulatorily and in terms of consumer restitution.

VW has confirmed receipt of the Notice of Violations, and confirms it is cooperating with the investigation.

What will happen first?

We predict all Clean Diesel and TDI engines will be pulled from US sales almost immediately. Likely by Tuesday at the latest.

Because every TDI sold with cheat code software just became a massive liability.   In addition to a potential $37k in EPA fines per vehicle, the legal costs for state and consumer criminal cases will be steep. Civil damages will also follow. So obviously, the only even vaguely safe course of action would be to stop selling more of the vehicles.

A potential second step in the coming weeks could be a software-related fix to increase the engines to max efficiency at all times. It is unknown if this is possible while still making the cars driveable. If a software-based patch is the desired recall path, new models could be reflashed and then be ready for sale to shoppers. Albeit with around 30-percent cuts in horsepower and torque, and new mileage stats.

In any case, affected owners are fine to keep driving the vehicles as normal. It will take about a year to send out recall notices, and a Stop Sale order from the justice department would also lag for months. A voluntary withdrawl of all TDI models from US sale will likely be a “temporary” move on the PR front.

But trust me: many more emissions tests will occur before a TDI goes back on sale in the US.

Washington – Today, EPA is issuing a notice of violation (NOV) of the Clean Air Act (CAA) to Volkswagen AG, Audi AG, and Volkswagen Group of America, Inc. (collectively referred to as Volkswagen). The NOV alleges that four-cylinder Volkswagen and Audi diesel cars from model years 2009-2015 include software that circumvents EPA emissions standards for certain air pollutants. California is separately issuing an In-Use Compliance letter to Volkswagen, and EPA and the California Air Resources Board (CARB) have both initiated investigations based on Volkswagen’s alleged actions.

“Using a defeat device in cars to evade clean air standards is illegal and a threat to public health,” said Cynthia Giles, Assistant Administrator for the Office of Enforcement and Compliance Assurance. “Working closely with the California Air Resources Board, EPA is committed to making sure that all automakers play by the same rules. EPA will continue to investigate these very serious matters.”

“Working with US EPA we are taking this important step to protect public health thanks to the dogged investigations by our laboratory scientists and staff,” said Air Resources Board Executive Officer Richard Corey. “Our goal now is to ensure that the affected cars are brought into compliance, to dig more deeply into the extent and implications of Volkswagen’s efforts to cheat on clean air rules, and to take appropriate further action.”

As described in the NOV, a sophisticated software algorithm on certain Volkswagen vehicles detects when the car is undergoing official emissions testing, and turns full emissions controls on only during the test. The effectiveness of these vehicles’ pollution emissions control devices is greatly reduced during all normal driving situations. This results in cars that meet emissions standards in the laboratory or testing station, but during normal operation, emit nitrogen oxides, or NOx, at up to 40 times the standard. The software produced by Volkswagen is a “defeat device,” as defined by the Clean Air Act.

The Clean Air Act requires vehicle manufacturers to certify to EPA that their products will meet applicable federal emission standards to control air pollution, and every vehicle sold in the U.S. must be covered by an EPA-issued certificate of conformity. Motor vehicles equipped with defeat devices, which reduce the effectiveness of the emission control system during normal driving conditions, cannot be certified. By making and selling vehicles with defeat devices that allowed for higher levels of air emissions than were certified to EPA, Volkswagen violated two important provisions of the Clean Air Act.

EPA and CARB uncovered the defeat device software after independent analysis by researchers at West Virginia University, working with the International Council on Clean Transportation, a non-governmental organization, raised questions about emissions levels, and the agencies began further investigations into the issue. In September, after EPA and CARB demanded an explanation for the identified emission problems, Volkswagen admitted that the cars contained defeat devices.

NOx pollution contributes to nitrogen dioxide, ground-level ozone, and fine particulate matter. Exposure to these pollutants has been linked with a range of serious health effects, including increased asthma attacks and other respiratory illnesses that can be serious enough to send people to the hospital. Exposure to ozone and particulate matter have also been associated with premature death due to respiratory-related or cardiovascular-related effects. Children, the elderly, and people with pre-existing respiratory disease are particularly at risk for health effects of these pollutants.

VW may be liable for civil penalties and injunctive relief for the violations alleged in the NOV.

The allegations cover roughly 482,000 diesel passenger cars sold in the United States since 2008.

It is incumbent upon Volkswagen to initiate the process that will fix the cars’ emissions systems. Car owners should know that although these vehicles have emissions exceeding standards, these violations do not present a safety hazard and the cars remain legal to drive and resell. Owners of cars of these models and years do not need to take any action at this time.