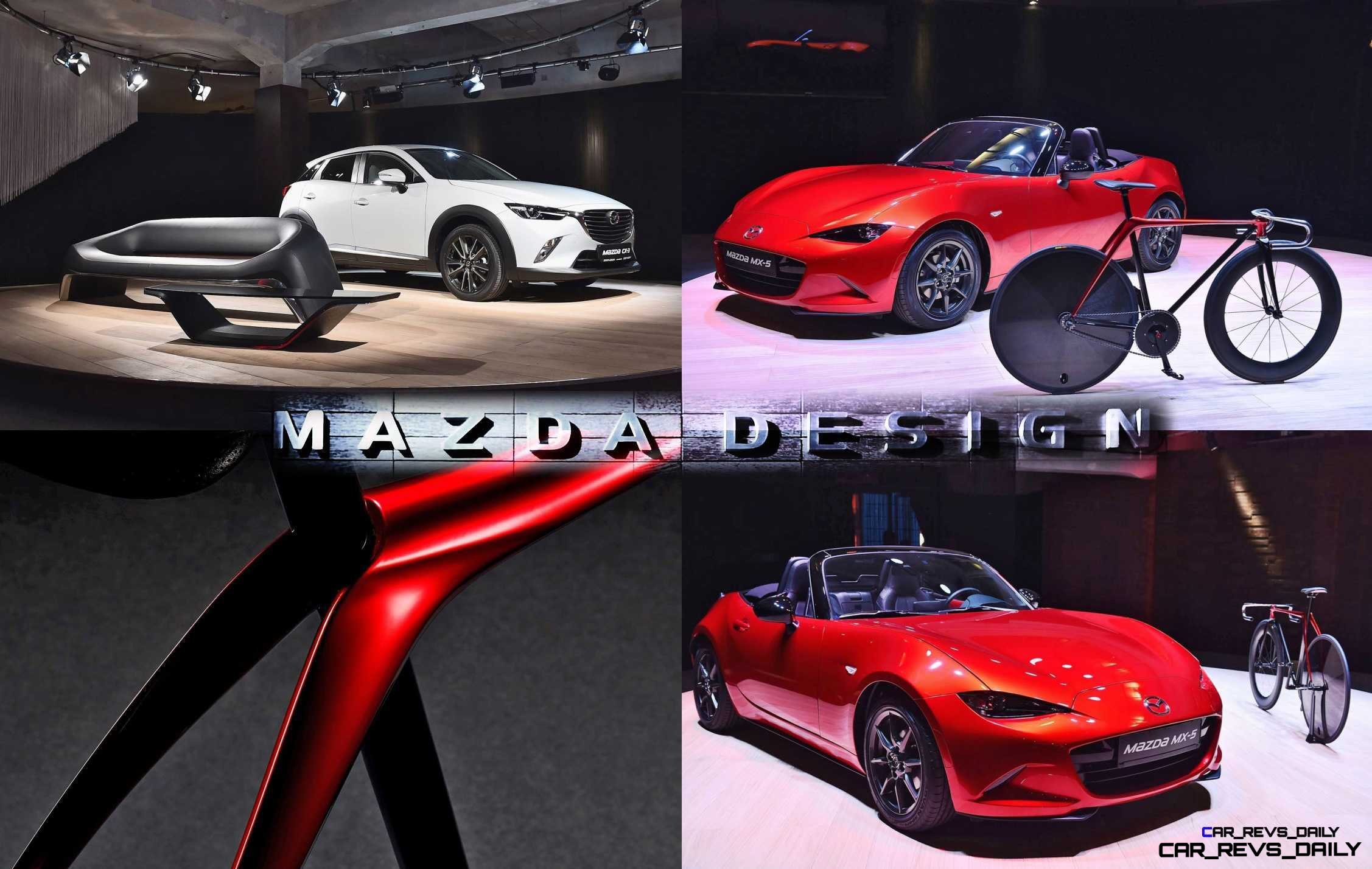 Mazda just had a very eventful week in Frankfurt: three Automotive Brand Contest awards for the CX-3, KODO Bike Concept, and grand prize for the KODO Design language. Very impressive results. It looks like the Mazda Design ‘Car as Art’ installation at Milan design week this Spring left quite the impression on the German Design Council, the award sponsors.

Held in Frankfurt, the awards capped off an eventful week in Deutschland: they unveiled an all-new concept car. The Koeru concept reveal shows upmarket ambitions as a full-size SUV with gorgeous lines and sporty handling.

Along with the concept reveal, very fresh overall lineup and new MX-5… Mazda also has the CX-3 compact SUV rolling out worldwide in the coming months. Perhaps the most prolific year in recent Mazda memory, for sure! Mazda did not come up with this product offensive overnight, however. Far from it. Over the last decade, Mazda has sought to define its forms, aesthetic and brand appeal across no less than a dozen concept cars. And many have led to faithful production variants.

The Milan collection of Mazda designs impressed the Auto Brand Contest award judges for their delicate but strong beauty, and flexible applications of the KODO feel.

The most impressive part of the KODO sofa, table, bike and scultural pieces is that they belong together. And feel as though from one artist.

For a design team in a major automaker to bring the KODO artistry to production models is quite special indeed.

HIROSHIMA, Japan, Sept. 17, 2015 — Mazda Motor Corporation announced today that the company received three awards in the Automotive Brand Contest. The company’s global design team, Mazda CX-3 and Bike by KODO concept were honoured at an award ceremony at the Staedel Museum in Frankfurt on September 15. The prestigious Automotive Brand Contest honours outstanding product and communication design. Sponsored by the German Design Council, the annual contest has 15 regular and four special award categories. Winners in each category are selected by a jury of journalists and experts in design and communications.

Mazda’s global design team received the Team of the Year award, which is presented for “innovative and consistent brand design.” With design studios in Japan, the U.S. and Germany, the team has created energetic and dynamic forms based on the KODO design theme that have found expression throughout the entire Mazda line-up in recent years.

A member of the German Design Council said, “Unlike other companies’ design strategy [KODO design] is not supposed to define a form language, and so Maeda always encourages his designers to propose something that would exceed his expectations. That is why each of current generation Mazda cars can have its own character while consistently expressing lively motion.”

The Mazda CX-3, a compact crossover SUV that went on sale this year, was named Best of the Best in the Exterior Volume Brand category, while the Bike by KODO Concept track racer displayed during Milan Design Week in April was recognized in the Parts & Accessories category.

“We are very excited about the awards presented to the CX-3, the Bike by KODO Concept and especially our Global Design Team,” said Ikuo Maeda, Executive Officer and Design Chief of Mazda’s Design Division. “The entire team will continue to work to create dynamic and energetic designs that will excite our customers.”

MILAN, ITALY—Mazda Motor Corporation has taken the wraps off Mazda-designed artworks, including “Bike by KODO concept” and “Sofa by KODO concept” on the eve of opening the event “Mazda Design: The Car as Art,” in the Italian city of Milan from April 14, 2015.

For many years Mazda has maintained a consistent focus on the representation of dynamic motion in its vehicle designs. Under the KODO—Soul of Motion design theme, Mazda’s new-generation vehicles express a powerful motion full of life, such as that displayed by animals in the wild.

With Mazda Design: The Car as Art, Mazda is aiming to further the evolution of the expression of motion by attempting the expression of two key sensibilities rooted in Japanese aesthetics; RIN, a sense of self-restrained dignity, and EN, an alluring sensuality that speaks directly to the senses.

“Bike by KODO concept” is a track racer that seeks to express the innate beauty of the bicycle. Its minimalist structure is composed of the least possible number of parts. The frame was painstakingly formed by hammering a single sheet of steel and the black leather saddle is hand-stitched, featuring the same red thread and stitch design as the all-new Mazda MX-5. The bicycle’s mixture of dynamism and allure is evocative of the Mazda MX-5’s styling.

“Sofa by KODO concept,” a collaborative effort between Mazda’s designers and Italian furniture makers, exhibits an exquisite blend of Mazda Design’s refined sensibilities and fine Italian craftsmanship backed by a long tradition of furniture-making. The form of the sofa is as honed as that of the all-new Mazda CX-3 and evokes the strong stance common to all Mazda’s new-generation vehicles.

Also on display at the event are a number of works by traditional Japanese craftsmen inspired by Mazda’s KODO—Soul of Motion design philosophy. KODOKI is a tsuiki copperware wine cooler hammered from a single sheet of copper in Japan’s famous Gyokusendo metal-working studio. SHIRAITO is a traditional lacquered box created by Kinjo-Ikkokusai which expresses the richness of natural phenomena using multiple layers of lacquer and finely-broken eggshell.

“Over the past few years, design has become an essential part of who we are, adding an artistic value to the entire Mazda brand experience,” said Masahiro Moro, Mazda’s Managing Executive Officer, in charge of Global Marketing, Customer Service and Sales Innovation. “As such, it only makes sense that we introduce our design messages here in Milan, a city of the apex of the design world, in order to elevate our brand image. Moving forward, we will create more opportunities to familiarize customers with Mazda and Mazda design in order to raise the value of our brand and strengthen our bond with customers.”