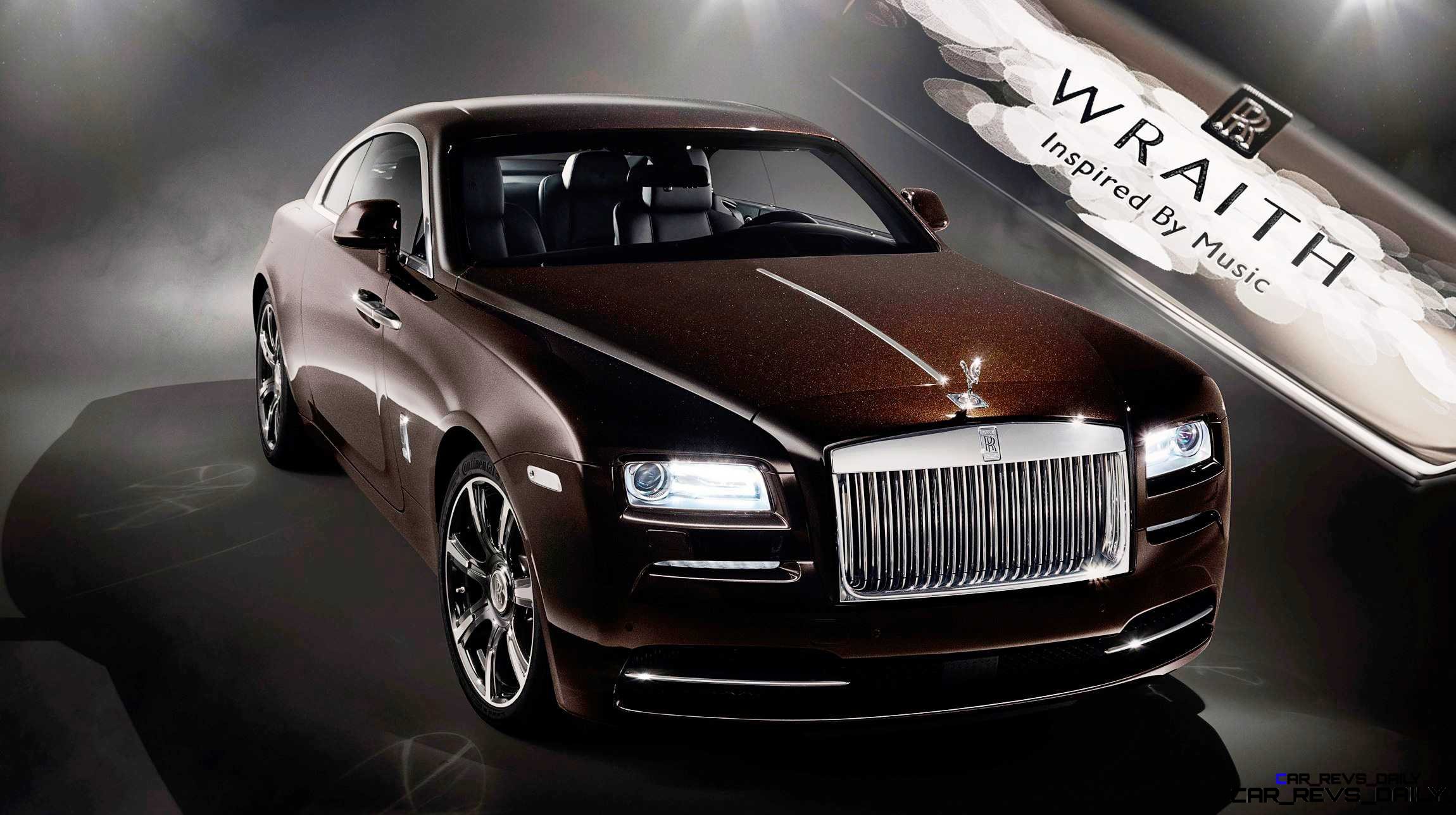 D.O.A. is how this new Wraith feels; cold and stiff under your fingertips.

As you may or may not know, we are HUGE Rolls-Royce fans here at Car-Revs-Daily. A chance to drive Wraith at a super swanky resort launch was a highlight of my few years writing car news and reviews.

But seriously, this latest special edition Wraith makes me so frustrated that it almost leads to anger. What the heck, Rolls?

This is perhaps the fifth special edition Roller this year, and all are fairly hideous. While I am positive this is not the case thanks to meticulously-planned detail tweaks, etc …. these “special” edition models feel like little more than a completed configurator build. The same wheels as the stock machine. No changes aside from color outside. Inside, some gold speaker grilles and polished badges attempt to feel special.

Not even a ride height drop, which can be done electronically in about 5 minutes with a laptop and OBDII plug.

Not a louder exhaust option, or some seats with better support. Or a dashboard that looks at all modern or warm or approachable.

I’m sorry Rolls, but this ‘Inspired by Music’ special edition is the worst one yet. Meant to honor rock ‘n’ roll, this thing is dead on arrival. And it did not even overdose like a rock star. It died of natural causes, peacefully in the night.

The Wraith ragtop is coming in January with a ‘Dawn’ badge.

Hopefully sometime next year, Rolls will actually revise the Wraith for a V-Spec mode, or a special edition that does not suck.

It needs much, much more horsepower, a different steering wheel, a glass roof, a full exterior black pack……  It needs serious help to feel less funereal.

At least a new set of wheels.

Rolls is quickly descending into lame special-edition hell with Aston and the Miata.

All the Wraith wants, you can sense, is madcat heaven via a remote exhaust flaps, gloss-black design details and cornering less floaty than the QEII.

Rolls-Royce Motor Cars has contributed to the myth and legend of the contemporary music scene since the birth of Rock & Roll. Over half a century later, this long-standing love affair lives on, with some of the world’s most celebrated artists choosing the marque as the ultimate affirmation of their success. In this spirit, Rolls-Royce Motor Cars is delighted to present Wraith ‘Inspired by Music’.

Since the launch of Wraith in 2013, customers have been able to commission their Rolls-Royce Wraith with Bespoke Audio; the most exhaustively designed sound system in automotive history. Like every element of a Rolls-Royce motor car, its construction blends the finest components with the skill of the most eminent experts in their field. Now, with Wraith ‘Inspired by Music’, these characteristics, and the precious materials used in the Bespoke Audio system, are brought very much to the fore, creating ‘the most exclusive music venue’ that delivers an unrivalled aural experience.

“Wraith ‘Inspired by Music’ appeals to those looking to Rolls-Royce for unique and creative motor cars. Its effortlessly cool appearance complements the superior Bespoke Audio system; the contemporary use of copper creates an atmospheric setting for the most encompassing music system on the market,” commented Torsten Müller Ötvös, Chief Executive Officer, Rolls-Royce Motor Cars.

A Lyrical Copper exterior paint finish, presented with a blend of brushed and polished textures elegantly hints at the use of copper in only the very best audio systems. On opening the car’s coach-doors attention is drawn to re-imagined speaker grilles, here presented in copper theme, and engraved with the words ‘Bespoke Audio’. The door panniers and floor mats have been crafted from finely-woven leather to add an additional depth of tactility to the car’s interior cabin. Copper-coloured door inserts, which start at the front of the cabin before tapering at the rear, have been included in the design to emphasise Wraith’s characteristic internal curves.

The fastidious detail that went into the development of the car’s sound-system is employed in every facet of the construction of the car. For example, the chaplets on the clock have been designed and meticulously crafted with a combination of warming copper and silver, whilst the radial lines of the outer bezel playfully emulate the look and feel of vinyl records.

The Bespoke Audio system was created from scratch by a team of the world’s very best automotive audio engineers. The two-year development process saw the team work closely with Rolls-Royce interior designers to ensure the system was perfectly tuned to the interior of the cabin. Indeed, this pursuit of aural perfection was deemed so important the interior designers had to consult with the Chief Audio Engineer before making any changes.

The extraordinary clarity of sound and dynamic range is delivered via a 1300W, 18 channel system comprising two highly powerful bass speakers, seven tweeters and seven mid range speakers. Two ‘exciter’ speakers hand-fitted in the car’s headlining play a vital role in bringing the sound to the listener at ear-level; ensuring the output perfectly imitates the way music is experienced in a live setting. Microphones constantly monitor ambient and exterior noises and will adjust volume and tone settings automatically to ensure no external agent detracts from the user’s listening pleasure.

In January 1961, Elvis Presley walked into the Beverley Hills Rolls-Royce dealership. Flush with the success of his music career and a five-year movie deal, he ordered a Rolls-Royce Phantom V; the only motor car in the world that could possibly befit his status as the ‘King of Rock & Roll’. From that day on, a Rolls-Royce motor car became the conveyance of choice for the music scene’s burgeoning elite.

Many of these cars have taken their place in automotive and music folklore. John Lennon, for example, acquired a Phantom V in 1965. During his ownership he commissioned a number of cutting-edge additions for the time including; a television, portable refrigerator, record player and the first blacked-out windows to appear on a car in England. He was so enamoured with the interior comfort of the finest riding car in the world, he is reported to have converted the rear bench-seat into a double bed.

However, it is his car’s exterior that ensures its place in the pantheon of famous Rolls-Royces. Not satisfied with the Phantom’s stately Valentines Black finish, he commissioned a Dutch art collective to re-paint the car in a psychedelic motif designed to mirror the decorations on fairground caravans. The result was not met with universal acclaim, with Lennon often recounting the tale of a woman who chased the car, shouting, “You swine! You swine! How dare you do that to a Rolls-Royce!”

One particular story resulting from the music world’s love affair with Rolls-Royce has segued from folklore to infamy. It concerns The Who drummer, Keith Moon and the night of his 21st birthday at the Holiday Inn in Flint Michigan. Legend goes that a somewhat high spirited Mr Moon drove his Rolls-Royce into the hotel’s swimming pool. This is categorically untrue and is probably an overblown conflation of two stories.

The first, involves a regrettable yet entirely understandable lapse of concentration, with Mr Moon failing to fully secure his Rolls-Royce’s handbrake. Unfortunately he had parked on a slope leading to a half-constructed swimming pool. The car made a characteristically graceful descent down the hill before coming to rest at the bottom of the unfilled pool.

The second is a little closer to the legend. On purchasing a new American car he tried to charge it to the band’s account, naturally they refused to indulge his request. Mr Moon expressed his displeasure by parking the car in an ornamental pond before telephoning the dealer to take it away. Not something he would ever have done to his beloved Rolls-Royce.

You can find all our press releases and press kits, as well as a wide selection of high resolution, downloadable photographs and video footage at our media website, PressClub. You can also find the communications team at Rolls-Royce Motor Cars on Twitter.