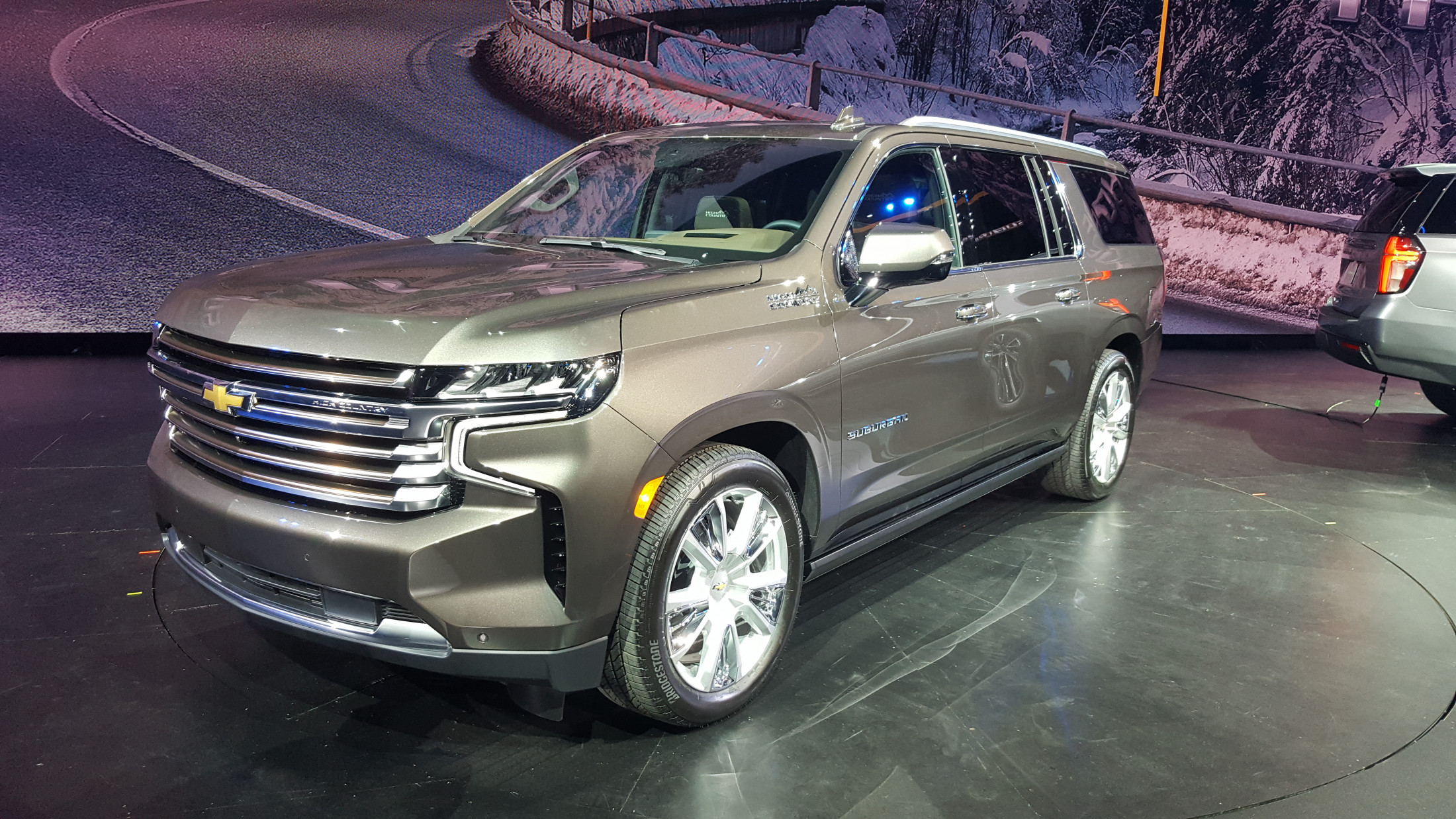 Big SUVS are big business for General Motors with the Chevrolet Tahoe and the bigger Suburban accounting for a large chunk of all SUVS that are currently sold in the U.S. However with rivals such as the Ford Expedition, Toyota Highlander, and the Volkswagen Atlas besting the duo in several categories including fuel economy, Chevrolet designers knew that they had to completely revamp and rethink the way they introduced the Tahoe and Suburban to a new wave of SUV buyers. The brand thinks it has succeeded in this mission with the unveiling of the newly revamped 2021 Chevrolet Tahoe and Suburban.

There is a lot going on here, and it all starts with the exterior styling which draws a lot of its very controversial inspiration from the Silverado pickup. That means prominent LED head and taillights front and rear, with 18-inch wheels as standard equipment (20-inch rims are optional.) Both SUVS will bring nine different paint hues to customers, and yes they are slightly bigger than before with the Suburban gaining 4.1 inches in wheelbase, as well as a 1.3 inch increase in length. The biggest leap is found in the Tahoe, with the wheelbase of that model growing by 4.9 inches, while the distance from end to end grows by 6.7 inches. As a result, both models don’t carryover the old model’s tired bones, and are in fact riding on an all new platform, which adds a multi-link independent rear suspension.

That’s right, both the Tahoe and the Suburban have finally adopted IRS which replaces the old and antiquated truck based solid rear axle, and should help create much smoother ride quality for occupants. The Ford Expedition has had IRS for awhile, so it’s nice to see GM finally respond to this challenge head on. The company’s fourth generation Magnetic Ride Control system and Air Ride Adaptive Air Ride suspension are also available as options to further enhance things.  The latter item gets to truly show its worth on the Z71 Tahoe (more on that later) but it allows all models equipped with it to be raised up to two extra inches for ground clearance, as well as being lowered by the same amount for improved entry and exit.

The fore-mentioned wheelbase stretch and increase in height plays its full hand in the interior where occupants are treated to far more space. In the case of the Tahoe, cargo space behind the third row climbs by a full 66 percent, with total cargo space checking in at 122.9 cubic feet. As for the Suburban, space inside this massive beast of burden was never really an issue, but that didn’t stop Chevrolet engineers from increasing cargo space by 19 percent for a final total of 144.7 cubic feet. Along with the ability to haul more stuff, third row passengers also benefit from the increased dimensions, with Tahoe passengers gaining an extra 10-inches of space, while Suburban gets two extra inches in both the second and third row to stretch out. Both models also feature easier to fold second row seats which eliminates a good deal of the grunt work that the outgoing models forced occupants to do.

The cabin itself benefits from better materials and a higher influx of differentiation between each trim level. For example, the RST’s appointments make the interior look properly sporty versus being designed by two separate committees on the outgoing model (a fact we highlighted in our review of the last generation RST.) The button count has also been reduced, but buyers looking for a floor mounted rotary shifter will not find it here, with GM replacing the old school column shifter with a push button one. Look for this particular addition to possibly generate a brief learning curve among buyers at first, but we suspect that they will eventually adapt to it after long term exposure. An infusion of technology is also on the menu for 2021, with buyers being able to add up to five different displays to their purchase.

In addition to the standard 10.1 inch infotainment screen (with GM claiming that makes it the biggest in the segment,) an optional digital instrument cluster and two rear mounted 12.6 inch displays are also available. The latter screens do come with one notable party trick, with rear passengers having the ability to not only type locations on the screen, but also actually send the information to the dash mounted infotainment screen. We have never seen this in an SUV before, and this would be a segment first for Chevrolet. The screens can also be setup to either play the same content from a mobile device, or they can go individually should a viewer opt for something different. Safety is also a key pillar for both models, and while some of the 30 or so safety features are decades old items that we take for granted such as blind spot monitoring, air bags, and seat belts. There are a few pieces of state of the art equipment that are interwoven in, including standard automatic emergency braking for all Suburban and Tahoe models. A suite of standard safety features is also on tap including a whole host of cameras, sensors, and more.

Performance for the Suburban and the Tahoe is arguably the other new development for 2021. It will not be found in the base engine, with the familiar 5.3 liter V8 still making 355 horsepower, nor with the carryover 6.2 liter V8 which makes 420 horsepower and is arguably the most performance focused engine here. Rather, it is the new 3.0 liter turbocharged inline six diesel that will certainly draw the most attention. The diesel’s appearance marks the return of the oil burner to the Suburban, with the last diesel Suburban and Tahoe being offered in the 1990s. Good for 255 horsepower, the Duramax is the same one used in the Silverado, and all three engines are mounted to a 10-speed automatic transmission. Fuel economy figures are currently not known, but look for the diesel to be the fuel economy champ of the trio.

Pricing is also not known, but Chevrolet did confirm that a range topping High Country model is joining the ranks, with the model usurping the Premier model as flagship of the Suburban lineup (it’s unknown if the Tahoe is getting the same treatment.) At the moment, the outgoing Suburban Premier starts at $69,795, so it’s safe to assume that the High Country will cross the $70,000 barrier. The 2021 Chevrolet Suburban and Tahoe are slated to arrive in showrooms in mid-2020 with fuel economy and final pricing figures expected to be released sometime before its official launch.