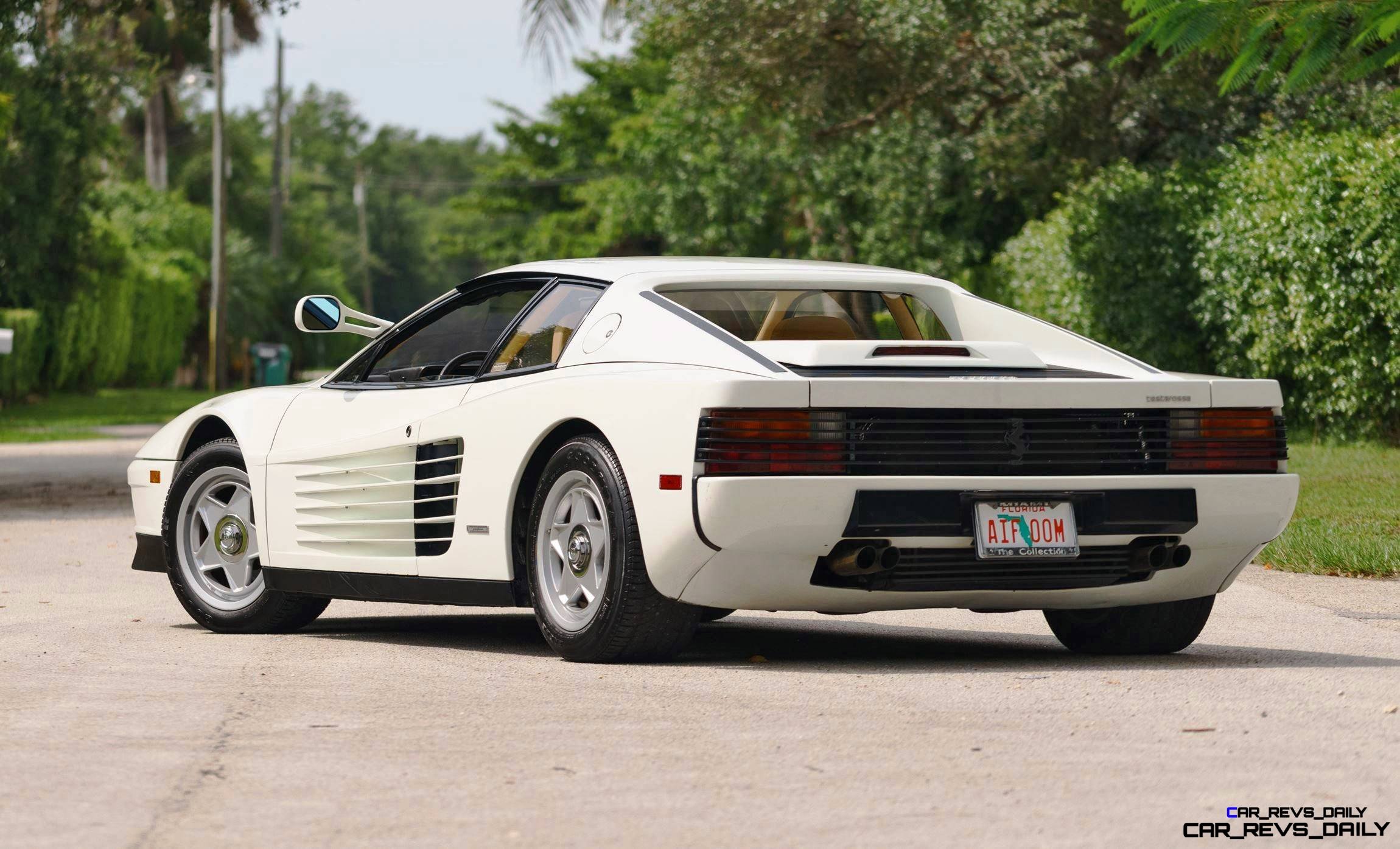 What was the epitome of South Beach chic in the 1980s?

All bought with an empire of white powder. To fit the profile, the detectives in Miami Vice had to live the part of druglords as their undercover personas. Fast cars and fast women… all wrapped up nicely with a solved case at the end of the hour.

Perhaps even more iconic than the art deco beachfronts and rampant turquoise from the show? The Ferrari 512 TR hero car of the show.

Unlike Magnum P.I., which used a fake Ferrari with Corvette bones underneath, the Vice car is the real deal.

And now, it is heading to the auction block next month for Mecum’s Monterey sale.

So gas up the jet, fill the briefcases with cash and le’s do ‘dis ting, mahn!

07/07/15
Iconic 1986 Ferrari Testarossa to be offered at The Mecum Daytime Auction Aug. 15WALWORTH, Wis. – July 7, 2015 – The star of the ‘80s-era television series “Miami Vice” is coming to the Mecum Daytime Auction in Monterey this Aug. 13-15. No, not Sonny Crockett and Ricardo Tubbs—the flashy detectives played by Don Johnson and Philip Michael Thomas who fought episode-after-episode against the seedy underworld of Miami—but their 1986 Ferrari Testarossa.
This iconic supercar with its signature side strakes was one of the quintessential poster cars that found itself plastered on many a teenager’s bedroom wall in the 1980s, and it will now be offered for sale at the Hyatt Regency Monterey Hotel and Spa – Del Monte Golf Course this Aug. 15.It was rumored that Enzo Ferrari himself proposed that the Ferrari factory could supply two black Testarossas for use on the show. From that day forward, it was this Testarossa that became the show’s signature car. The only significant change came when the Ferrari was repainted white at the behest of Director Michael Mann for better visibility in night scenes.
This Testarossa quickly moved into cult status along with other series props such as Ray Ban sunglasses, Armani jackets, Scarab speedboats and enough firearms for a small army.The Testarossa sports a 4.9 liter, 390-horsepower flat-12 engine, a traditional five-speed manual gated shifter, beige leather, power windows, power locks, power seats, cruise control and air conditioning. After “Miami Vice” ended its series run in 1989 the car was placed into storage until earlier this year.

Now showing 16,124 miles and authenticated by both Ferrari North America and Ferrari Classiche, with documented service records from Shelton Ferrari in Fort Lauderdale, Fla., this exotic recently received an engine-out service at a cost of $8,000. The sun may have set on Crockett and Tubbs, but the “Miami Vice” Testarossa remains an enduring icon.

To view the “Miami Vice” Ferrari Testarossa or to register as a bidder, visit Mecum.com. Bidder registration is $100 and can be completed in advance online or on-site at the auction. The Mecum Daytime Auction in Monterey is open to buyers, sellers and spectators with general admission tickets available at the gate for $25; children 12 and younger are admitted free of charge. Portions of the auction will be broadcast live on NBC Sports Network with a stream of the entire event presented on Mecum’s website. For more details on the auction, to consign a vehicle or to register as a bidder for this and all Mecum auctions, visit www.mecum.com or call (262) 275-5050.

About Mecum Auctions
Nobody sells more than Mecum. Nobody. The Mecum Auction Company is the world leader of collector car, vintage and antique motorcycle, and Road Art sales, hosting auctions throughout the United States. The company has been specializing in the sale of collector cars for 28 years, now offering more than 15,000 vehicles per year and averaging more than one auction each month. Established by President Dana Mecum in 1988, Mecum Auctions remains a family-run company headquartered in Walworth, Wis. For further information, visit Mecum.com or call (262) 275-5050. Follow along with Mecum’s social media news and join us on Facebook, Twitter, YouTube, Pinterest and Instagram.