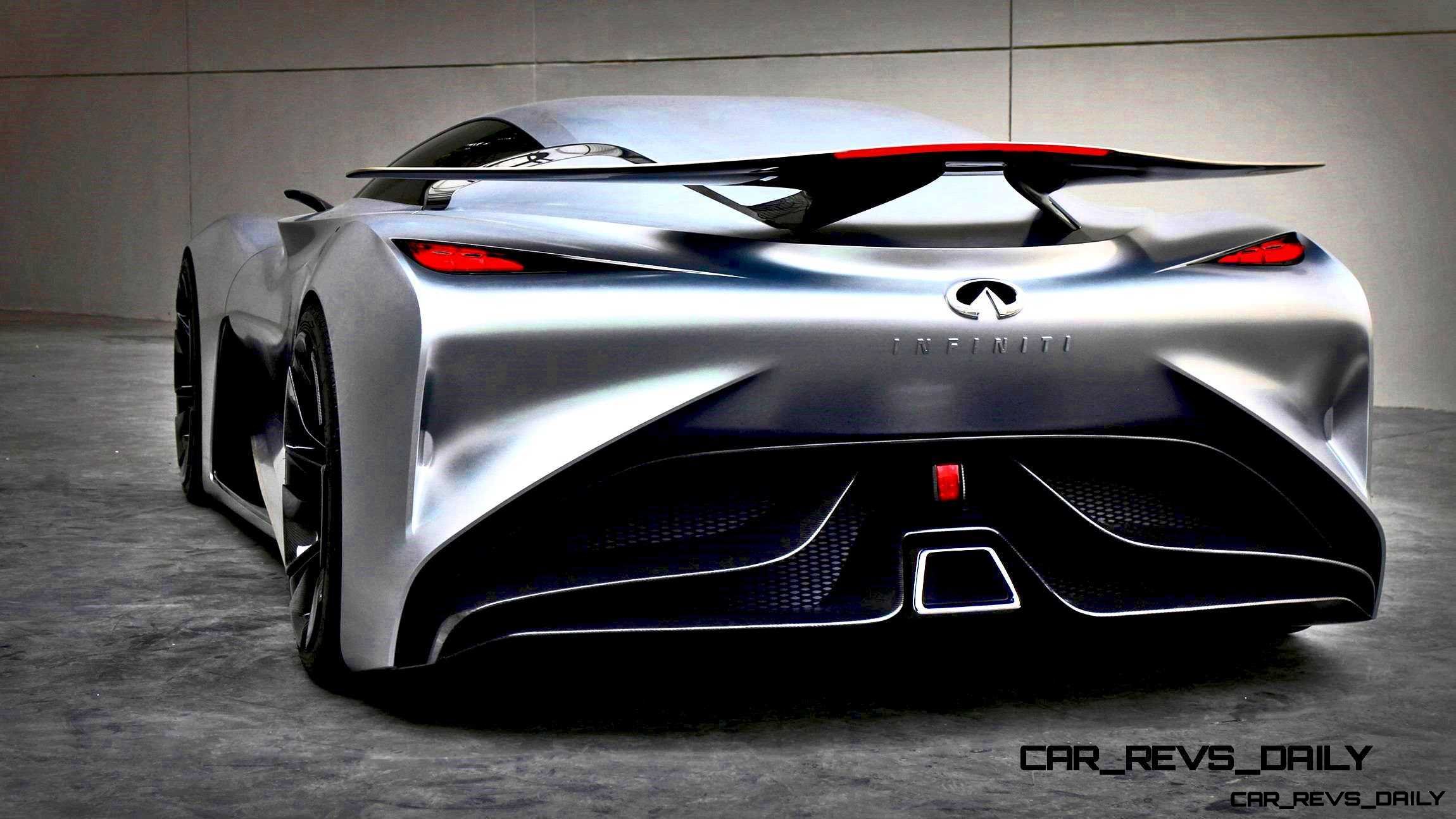 Here is some great news from Infiniti! The brand’s Gran Turismo Vision GT car just debuted in Shanghai — at an art museum, naturally.

Everyone knows most concept cars never get “made.” They will not reach production, sure.

But with these VGT cars — some of them literally never materialize. They are 100-percent digital fantasies.

Sure, the design studio might have a clay styling buck – but rarely a concept roller ready for the global show circuit.

Although shown in China with a natural and neutral earth-tones, the design showcase is likely to snag some paint ahead of Pebble Beach this year. Great news. It would look stunning on the central concept lawn, as well as the Infiniti show stand.

In 4D, the design is fantastic. Proportions are ridiculously amazing, with a front-engine nose bulge to shame even the AMG GT or Ferrari F12.

Those models would be among the Infiniti VGT’s competitors in real life.

So far, we have seen teaser versions of almost an entire future lineup from Infiniti. Think about it: Q30, QX30, Q60 Q80 just in the last 24-months.

As icing on the cake of concepts, the VGT is great. We’re ready to surf the big wave of new Infiniti cars and trucks….. soon.

Inside news is that the Q60 is taking top priority, with a launch around August or September as a 2016 model-year.

This was the first time the Vision GT was displayed as a real “flesh and bones” concept car, having only been seen and experienced digitally in GT6 prior to this event.

The Infiniti Concept Vision Gran Turismo is a vision of what a high performance Infiniti could look like in the future. Available for download in GT6 exclusively on the PlayStation®3 system, it was created through close collaboration with the creators of Gran Turismo®, the racing game franchise developed by Polyphony Digital Inc. that has sold more than 72 million copies worldwide.

The team kept to Infiniti’s design language and added some Chinese influences to the Infiniti Concept Vision Gran Turismo. The fluid movement and the delicate gradation of the body are inspired by traditional Chinese calligraphy and landscape paintings, while the character lines uninhibitedly flowing through the car reflect the dynamism of China.

Up front, the Infiniti Concept Vision Gran Turismo sports a sharp visage and a wide grille, giving it a wild and powerful look. The curves of the fenders wrap around the tires, and the car appears ready to pounce.

The design development of the Infiniti Concept Vision Gran Turismo started with hand sketching, then refined digitally, refined again by hand sculpting, and then returned to digital for final refinement.

“The Q80 Inspiration, the Q60 Concept and the Infiniti Concept Vision Gran Turismo are all thematically different,” said Alfonso Albaisa, Infiniti Executive Design Director. “Yet the same thread of handcrafted artistry weaves through them, and they all speak with one Infiniti design language.” Infiniti Motor Company Ltd. is headquartered in Hong Kong with sales operations in over 50 countries. The Infiniti brand was launched in 1989. Its range of premium automobiles is currently built in manufacturing facilities in Japan, the United States and China. Production in the UK will start in 2015, bringing with it significant expansion of the brand’s portfolio. Infiniti plans to also expand manufacturing into Mexico by 2017.

As the Title Partner and Vehicle Performance Partner of Infiniti Red Bull Racing, Infiniti has a far-reaching technical collaboration with the four-time FIA Formula One World Championship winning Team.