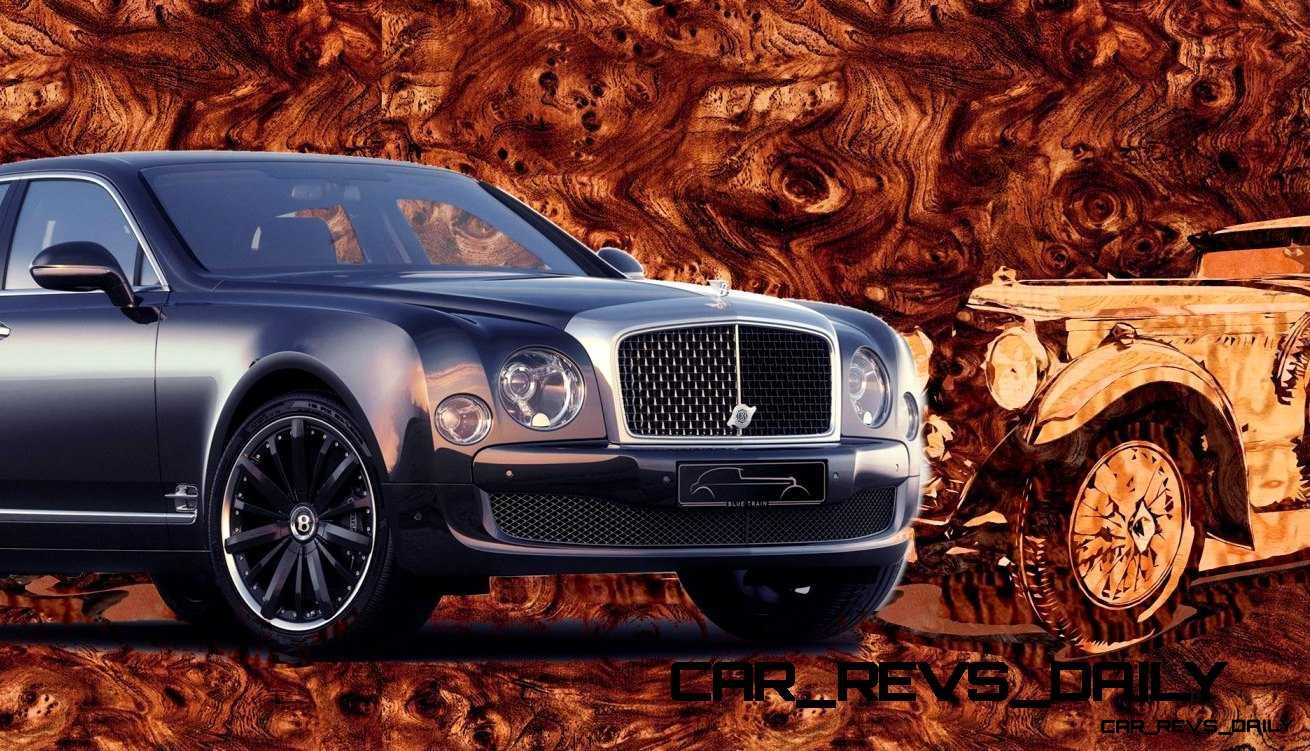 Honoring one of the most famous Bentleys of all time, a 1930 Speed Six that beat the high-speed Calais-Mediterranée Express train  to its destination — something most thought could not be done by any car.

Featuring a one-off chop-top coupe style, the Blue Train is such a legend that a few reproductions have even been created — including the RM Amelia Island car below.

Inside, special sills, seat embroideries and a fantastic wood inlay with the 1930 car inlaid to the burled wood. Very, very cool.

Only four will be made and they are to be sold exclusively in continental Europe (for some reason). This photo is labelled ‘Black Edition’ so a hunter green might be offered as well to match the original car. About the Bentley Blue Train Debuting this week at the Techno-Classica show in Essen, Germany, just four examples will be hand-crafted in Crewe for customers in continental Europe.

85 years ago, Captain Woolf Barnato, Chairman of Bentley Motors and pioneering ‘Bentley Boy’, was staying in Cannes at the Carlton Hotel. He accepted a wager that not only could he beat the Calais-Mediterranée Express or ‘Blue Train’ back to Calais, but that he could be at his club in London before the train even reached the English Channel. He was, and the remarkable victory has been talked about ever since.

The ‘Blue Train’ Limited Edition is produced by the skilled craftsmen and women of Bentley’s bespoke coachbuilding division, Mulliner. Each features a number of delightful historical references and modern interpretations of  design details from the original Speed Six.

Richard Charlesworth, Head of the Bentley Heritage Collection, comments: “The Blue Train is one of the most famous and celebrated cars in the world, and it perfectly embodies the racing spirit of the Bentley. Woolf Barnato was a three-time Le Mans victor, but winning the Blue Train race captured the public’s imagination, and fuelled the legend of the Bentley Boys. By beating the Calais-Mediterranée Express he forever guaranteed the Speed Six’s place in automotive history.”

Robert Engstler, Regional Director Europe, added: “The fact that we are producing just four of these Limited Editions is highly significant, as Barnato famously made it to the club in London four minutes before the train arrived in Calais. The unique design elements bring back nostalgic memories of one of the most legendary Bentleys of all times.”

The Mulsanne Speed Blue Train by Mulliner can be seen at the Techno-Classica Show in Essen (Hall 7). from the 15th to the 19th of April 2015.

Mulliner exists to respond to the requirements of Bentley’s most discerning customers. Mulliner Limited Editions reflect carefully chosen and inspirational themes. Individually these might have special significance for customers in specific markets, but what they all share is the highest standards of Mulliner craftsmanship – taking the concept of Bentley luxury and pushing it even further.

Mulliner Limited Editions are rare by design and, as a result, they all have the potential to become instant classics, desired by many but driven only by a fortunate few.

In addition to the standard specification of Mulsanne Speed, the Mulliner Limited Edition ‘Blue Train’ also benefits from:

Bentley Motors is the most sought after luxury car brand in the world. The company’s headquarters in Crewe is home to all of its operations including design, R&D, engineering and production of the company’s three model lines, Continental, Flying Spur and Mulsanne. The combination of fine craftsmanship, using skills that have been handed down through generations, alongside engineering expertise and cutting-edge technology is unique to UK luxury car brands such as Bentley. It is also an example of high-value British manufacturing at its best. Bentley employs around 3,700 people at Crewe.