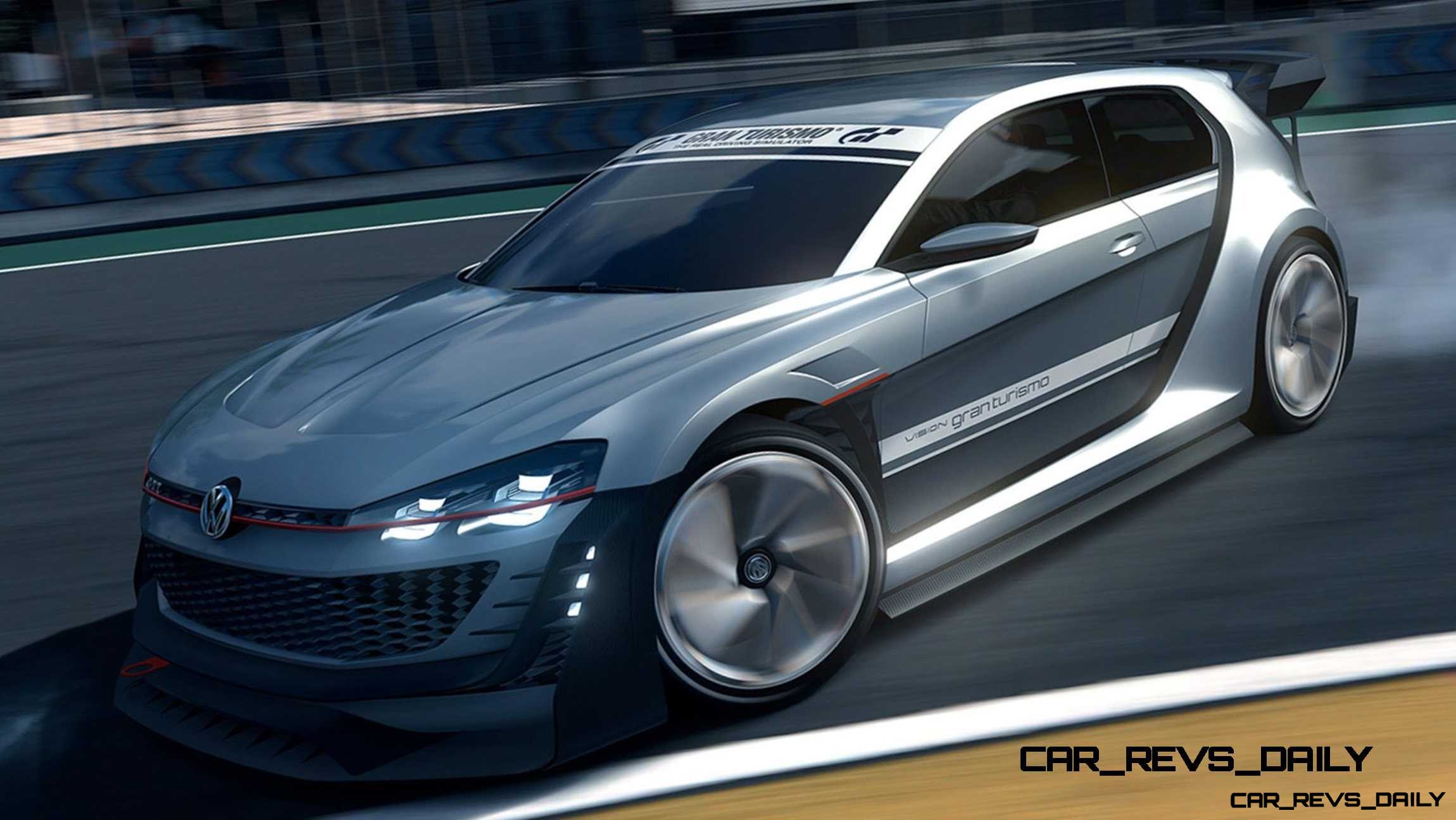 No one will want to “distance” themselves from this latest concept for GT6! With a 503-horsepower VR6 TSI and a thumping shove of torque, this AWD scorcher promises a virtual sprint to 60-mph of just 3.6-seconds.

The GTI SuperSport is the car’s name, and it is available to download after updating to the game version 1.18. Four color choices are available on this baby AMG-killer of a track concept.

Volkswagen’s Vision GTI roadster from a year ago was a fantastic entry into the GT6 racing world — but obviously the speedster is less than a practical look at what a GTI could be.

VW is releasing a second VGT concept, however, with much more real-world sharing with the GTI — at least in theory.

We only have a handful of images of the vehicle so far, but they are enough to be very exciting! The engine note alone is a fantastic tease of what a racing tune would sound like on the VW’s 2.0-liter turbo four-cylinder.

Visually, the upcoming concept shares some design details with the 2013 Design Vision GTI, but is far more track-focused. Huge scoops and ducts appear in the hood as reverse vents, while NACA ducts are also embedded into the roof ahead of a huge GT3-style carbon wing. This enormous wing has major vertical elements for high-speed stability, curving down around the side of the hatch in back and into the widebody rear fenders. Into the open space below the wing are functional rear fender vents and a giant carbon-fiber diffuser down below.

Overall, it is safe to say that this latest Vision GTI concept is not production feasible — but even so, will be a really fun way to race in Gran Turismo with a superhero level of speed, grip and agility to take on pure exotics.

The Volkswagen GTI Supersport Vision Gran Turismo has been released on “Gran Turismo 6”, available exclusively on PlayStation®3.A monster hatchback that brings the core concept of the “GTI” to life from a different point of view.

How to receive it

After Update 1.18 has been installed, the car can be purchased from the [Vision GT] area within the [CARS] section in “My Home” (here, you can also find the car’s presentation movie). Alternatively, it is also possible to obtain the car by completing a lap (regardless of the lap time) in the new Seasonal Event, available only for a limited time.

Volkswagen extends its GTI fleet for “Gran Turismo 6”. Following the “GTI Roadster Vision Gran Turismo” designed specially for PlayStation® in 2014, the inventor of the GTI 2015 is now sending out the new “GTI Supersport Vision Gran Turismo” onto the virtual racetrack. The open-top roadster is now joined by a hardtop supercar.

Volkswagen has developed a new sports car for the digital world in the shape of the two-seater “GTI Supersport Vision Gran Turismo”. The designers and engineers picked up on the legendary GTI DNA from a visual and technical standpoint. In a further development, the styling of the iconic compact sports cars was once again reinterpreted and further endowed with a 503 HP VR6 TSI engine. A 7-speed dual-clutch gearbox transfers the power via the 4MOTION four-wheel drive to the track. Up to 665 Nm (490.3 ft-lb) of torque delivers mighty thrust. And the handling characteristics have been tuned specifically for the “Gran Turismo” racetracks.

Despite the progressive interpretation of the GTI concept, the classic Golf design is instantly recognizable. From a conceptual viewpoint, the entire concept of the virtual GTI as outlined is geared to the physical laws of the racetrack: by intensively optimizing the proportions and body surfaces, the designers managed to achieve superlative performance – with a low center of gravity, aerodynamically honed front area and very high downforce. The targeted usage of carbon-fiber features on the body surfaces and in numerous other details reduces weight.

The body of the “Supersport” has been aerodynamically optimised through numerous features. The front-end, for instance, has been fine-tuned, with the designers placing the vertical light modules further outboard; they are connected via a spoiler element to underscore the width of the GTI and enhance its visual presence. The air flow through the body has also been enhanced with a large air inlet boosting aerodynamic performance at the front. The airstream flows past the front wheels and is practically sucked out of the wheel arches in order to cool down the brake discs. The hallmark GTI honeycomb structure adorns all the air inlet and outlet openings.

Aerodynamics and cooling are just as important in the strengthened rear section: downstream of the striking roof spoiler, a rear wing creates the necessary downforce at the rear axle. From a design point of view, the carbon-fiber structure which holds the rear wing, protrudes from the C-pillar. An aerodynamic feature on the roof ensures that the airflow to the rear wing is perfect. Furthermore, air flows through the rear wheel arches in order to optimally dissipate the thermal energy produced during braking. At the rear, the powerfully sculpted, low-set shoulder catches the eye, which extends well into the rear – as typical for this type of GTI supercar it continues behind the C-pillar and merges with the wheel vent at the lower area. The external diffuser is equally striking. The flat rear lights have been visually adapted to the extraordinary flat and dynamic proportions of the rear end.

Like the “Roadster”, the “Supersport” is also fitted with 20-inch GTI alloy wheels. The multipiece GTI wheels were refined further; a star consisting of five spokes, which are finished in ultralight carbon fiber, sits proudly in the center. Between the wheels, the two classic GTI stripes can be found above the side sill – also a homage to the Golf GTI I. The same applies to the hallmark black film around the edges of the rear window, which is finished in a carbon-fiber look for the “Supersport”. A helmet compartment and a racing tank have also been built into the car. The “GTI Supersport Vision Gran Turismo” can be configured in the four colors of “Reflex Silver”, “Gran Turismo Red”, “Lapiz Blue” or “Oryx White”.

On the racetracks in the world of GT6, the unmistakably charismatic looks of the new “GTI Supersport Vision Gran Turismo” in the digital rear-view mirror are likely to make the other contenders more than a little nervous.

Vision Gran Turismo is a project in which the world’s leading brands develop concept cars for Gran Turismo and its fans. Please look forward to more fantastic car models in line to be released in the near future!