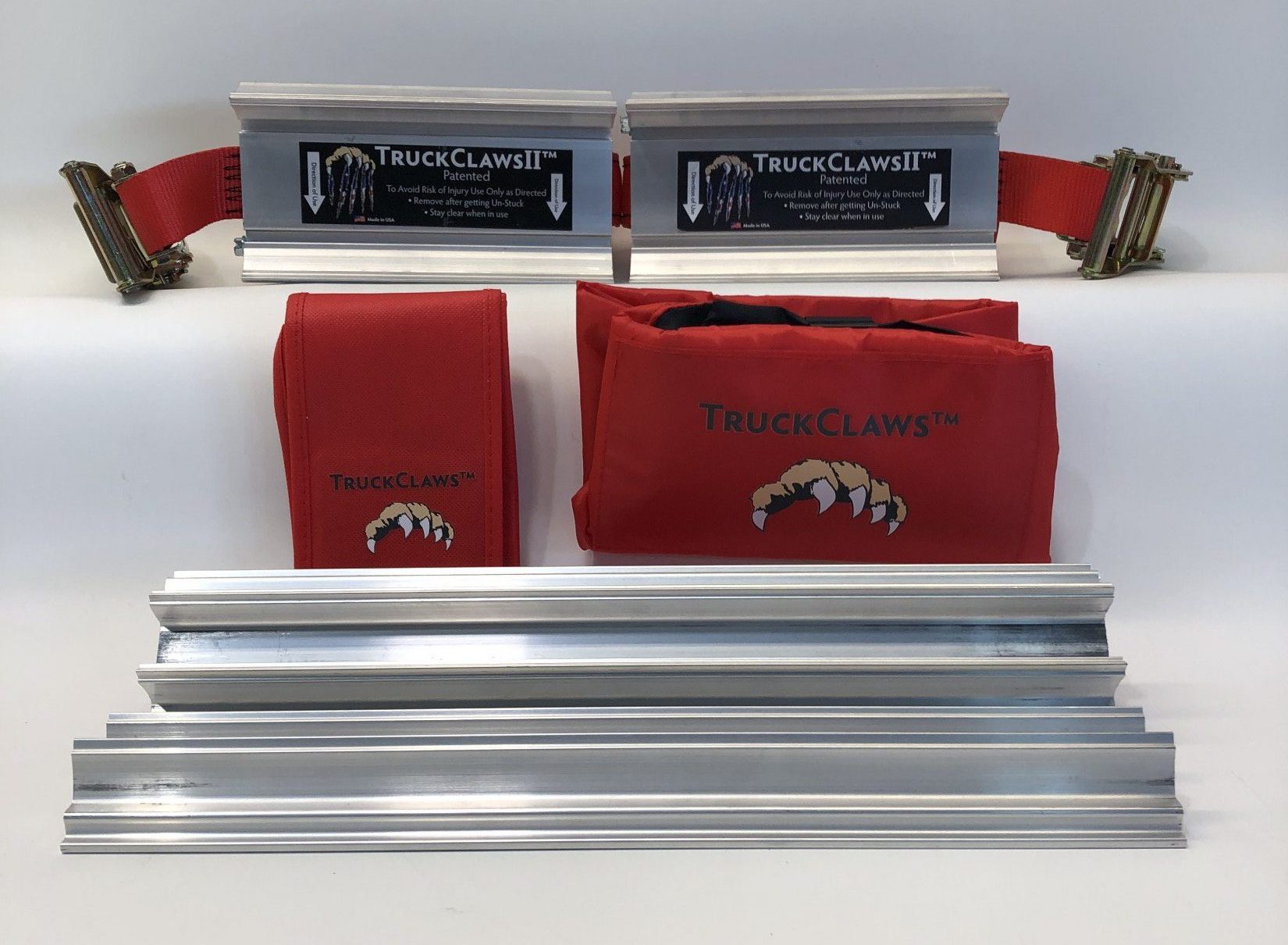 What are Truck Claws?

Truck claws are a traction device that is strapped onto the tires of a vehicle that is stuck in sand, snow, or mud to help free it.

How do they work?

Truck Claws use a heavy-duty ratchet strap to attach a carefully designed extruded aluminum block to the tire. This system frees stuck vehicles by both lifting the vehicle and biting into the terrain. The lifting action frees the tire from the suction of mud while the biting edge of the block grips ice and the large flat face provides for traction against snow, sand, and mud.

Installation is simple. Just orient the block in the direction you want the vehicle to go using the arrows on the top of the block. Run the ratchet strap around the tire and through the rim. Make sure that the strap doesn’t contact any brake lines or other components all the way around the tire. Run the strap through the ratchet and ratchet the strap until the system is very snug. If the ratchet is hitting the wheel, there are plastic protectors that can be placed between the wheel and ratchet to protect them. Do this on both sides of a drive axle. If additional traction is needed, more Truck Claws can be added per tire or add another set to an additional drive axle for 4wd vehicles.

When driving with the Truck Claws attached, accelerate very slowly. Only use enough throttle to move the tires until the truck claws bite. Add a little more throttle until you feel the Truck Claw lift the vehicle and propel it forward. Reduce throttle again so that the tires are slowly rotating around. Repeat until free from the terrain that was causing the vehicle to be stuck. Remove the Truck Claws once unstuck, they are not designed to be driven for more than short distances to free a stuck vehicle.

With one set of claws, they were able to bite and pull the truck and trailer forward a few inches each time. However, as the hill became steeper the weight of the trailer would cause the truck to slide backwards until the claws made a full rotation and grabbed the ice again. Essentially any distance gained was lost before the claw could make a full rotation again. To combat this, we added a little more throttle hoping the claws would get around faster and keep the truck from sliding backwards. It was quickly determined that this was only putting undue stress on the Truck Claws and truck without making additional progress.

We added the second set onto the same drive wheels 180° from the first set. This reduced the amount the tires had to spin before the claws bit into the ice again. This helped significantly but there was still some rearward sliding when the claws weren’t biting. Ultimately, we used more throttle than we would have liked, but we were able to make the climb.

Tire chains are much more effective for snowy or icy roads, especially when traveling longer distances. A good set of tire chains will provide constant or near constant contact with the ice no allowing the vehicle to slide. Tire chains can be purchased for less than Truck Claws, but they aren’t as easy to install and don’t work as well in deep snow, mud, and sand.

Traction boards are cheap and easy to use. Simply clear some space around the tires, throw the boards under the tires and drive out. However, for covering distances more than one length of the boards, either many boards are needed or constant resetting. They are great for sand or mud to build the momentum needed to get unstuck. They also have many other uses like bridging gaps or stacking them to gain clearance for an obstacle.

Truck Claws work very well for their intended purpose. If stuck in on an icy roadway, snow, mud, or sand Truck Claws might just be the tool for you. Having a set on hand could save both time and money when compared to calling a tow truck.

As a token of our appreciation to our viewers, Truck Claws has teamed up with Car Revs Daily and Engine Adventures to giveaway a combination set to one lucky winner. Click here to enter. Best of luck!