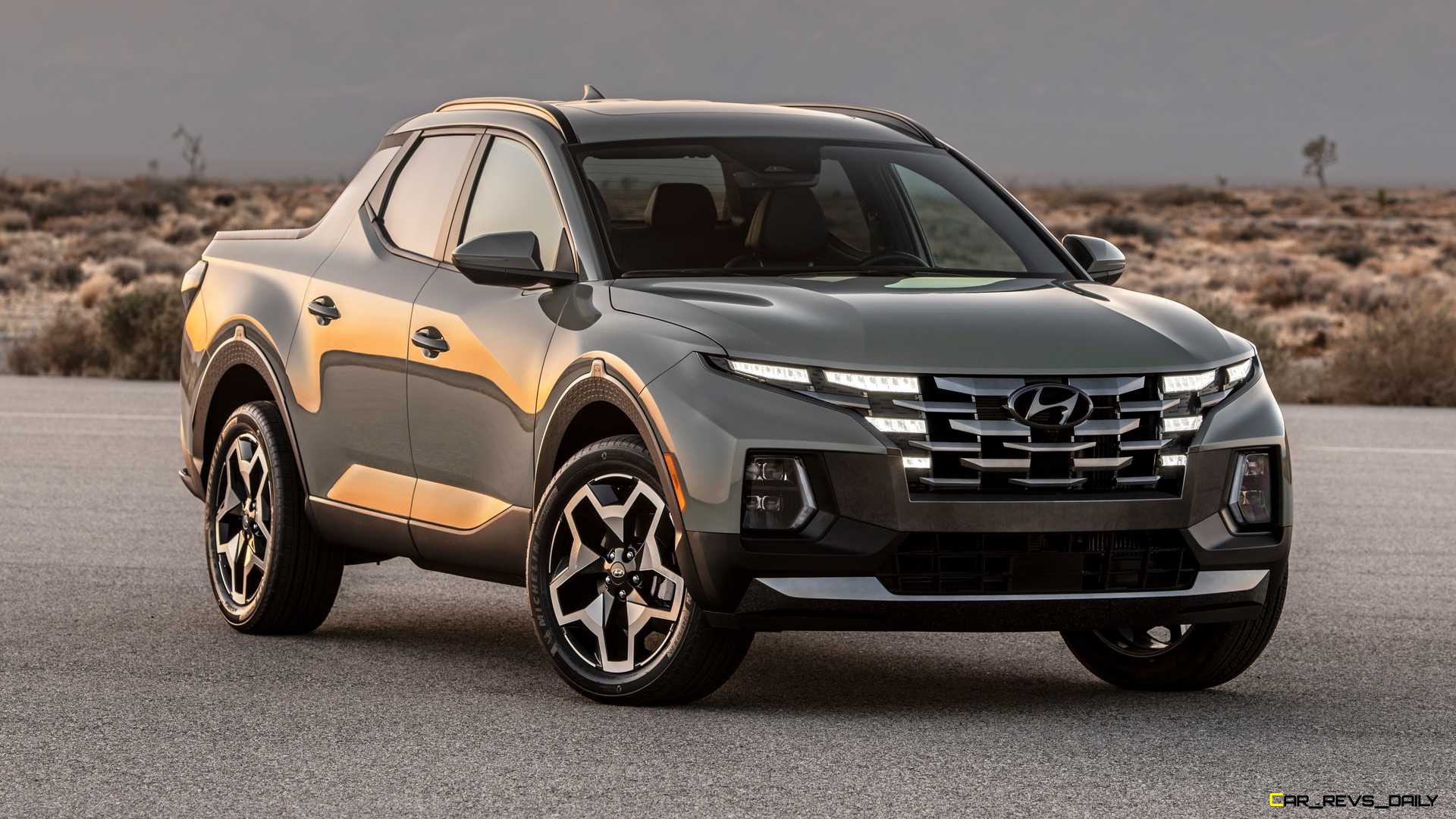 When Hyundai first teased the world in 2015 with the Santa Cruz concept, it was the first indication that Hyundai studied the pickup segment. Back then, the company neither confirmed nor denied that the swanky show truck was entering production. Fast forward to 2021, and Hyundai confirmed that the Santa Cruz is entering production with the first units going on sale this summer.

Just don’t call it a pickup in front of Hyundai reps who prefer you call it a “Sport Adventure Vehicle.” That’s a clever way of ruffling BMW’s feathers, and it also shows the immense amount of flexibility that Hyundai engineered into Santa Cruz. The truck shares its platform and styling with the Tucson SUV, which means it shares a lot of the Tucson’s front-end styling. Like that model, the Santa Cruz has novel daytime running lamps that actually blend into the front grille. They make their bold appearance at night and allow the Santa Cruz to have a vivid nighttime personality.

The similarities end when you get to the side of the Santa Cruz. The truck has an athletic silhouette, and the roofline slopes aggressively towards the bed. Speaking of the bed, it’s the party piece and offers 52.1 inches of space. While this might not seem like much at first glance, the bed does make up for it with ingenuity. A portion of the bed floor actually rises up to reveal a hidden storage compartment to hide more things. Bed steps in the rear bumper help improve access, and a slidable tonneau cover helps improve cargo security.

The space is also capable of hauling a single bicycle though it does hang rather awkwardly over the tailgate. For now, Hyundai will offer a protective piece to keep the tailgate from getting scratched up. Still, the company did reveal that a proper bed extender will eventually be offered, making that task much easier.

The Santa Cruz comes standard with an eight-inch touchscreen infotainment system that’s also borrowed from the Tucson, with buyers having the option of upgrading it to a larger 10-inch display and a fully digital instrument cluster to replace the standard analog units. The cabin has a few tricks of its own, with the rear seats folding up to reveal small plastic storage cubbies for items. The Santa Fe also features bed lighting and even wireless Apple CarPlay and Android Auto.

Hyundai’s full suite of driver-assist aides will also be on board, including blind-spot monitoring, adaptive cruise control, and even the firm’s blind monitor technology that projects a camera image when you are turning left and right. With the Honda Ridgeline and the Ford Maverick potentially being the two top dogs in the segment, it will be interesting to see if Santa Cruz’s unique approach to providing equipment for the dollar will be enough for it to command a sizable slice of the mid-size pickup market.

Unlike other mid-size pickup offerings, Hyundai is taking a big risk and making Santa Cruz an all four-cylinder affair with the oily bits being borrowed from the Tuscon. The base engine is a naturally aspirated 2.5-liter four-cylinder, but Hyundai is not ready to share final horsepower and torque numbers just yet. Instead, the firm revealed that the engine makes over 190+ horsepower and 180+ lb-ft of torque. An eight-speed automatic will be the lone transmission on hand, with the combination being paired to a standard all-wheel-drive system. Hyundai claims that this allows the Santa Cruz to tow up to 3,500 lbs.

Buyers looking for more power can opt for the optional turbocharged version of the 2.5-liter four-cylinder engine. Like before, Hyundai is not talking final numbers just yet but estimates the engine makes 275+ horsepower and 310+ lb-ft of torque. Towing capacity climbs up to 5,000 lbs, and while the Santa Cruz is not a performance offering, this trim will come equipped with an eight-speed dual-clutch automatic that features steering wheel-mounted paddle shifters.

Hyundai did not disclose pricing for the 2022 Santa Cruz during its press event but did reveal that the Santa Cruz will begin production at Hyundai’s Montgomery, Alabama plant in June, with the first units being shipped out to showrooms this summer. The Santa Cruz will certainly have a tall mountain to climb in terms of credibility and relevance. That said, we see this truck potentially succeeding in urban markets, especially with buyers who want something that can haul cargo but don’t need the size that comes with a full-size pickup.