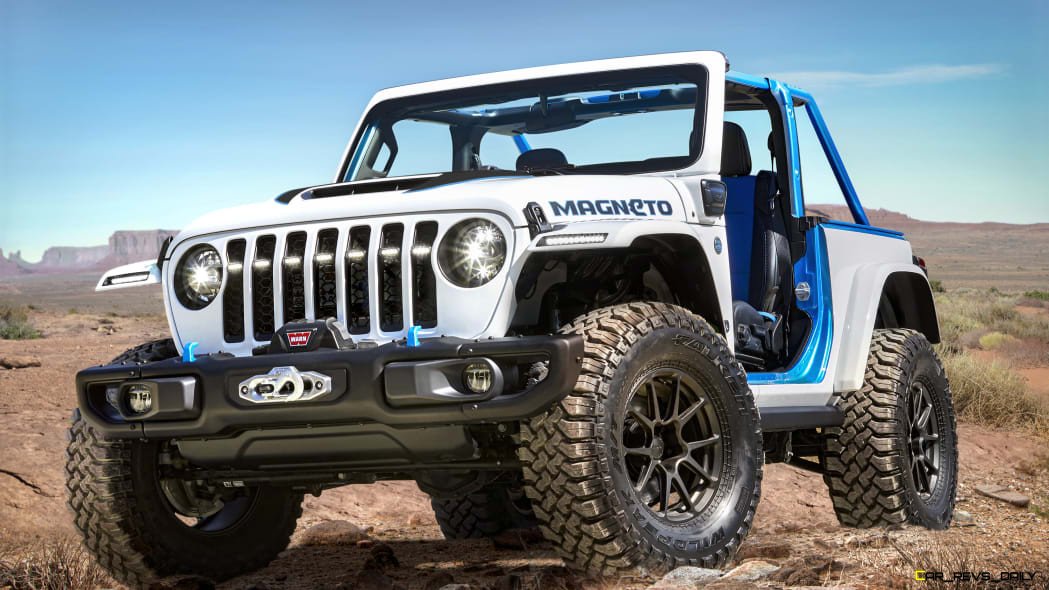 When Jeep first teased the Magneto, we had no idea what exactly Jeep had up its sleeve. FCA/Stellantis was always behind the eight ball when it came to developing battery technology, and we weren’t too sure if the Magneto would be a pure electric offering or if it would be some sort of hybrid offering. But as it turns out, Jeep engineers did have a green surprise and revealed that the Magneto will be the first BEV Wrangler ever made.

For the moment, the Magneto exists as a one-off concept creation, but as the name implies, this is indeed an all-electric Jeep that moves the needle in a radically different direction. Under the hood is an all-electric powertrain, but in perhaps a first for an EV, the motor is not mated to an automatic or CVT but to an old-school six-speed manual transmission that sends power to all four wheels through the solid front and rear axles as well as a two-speed transfer case.

The motor here is a customized axial-flux design that was tailor-built to match the exact performance specs of the 3.6 liter Pentastar V6. That translates to 286 horsepower and 273 lb-ft of torque though the electrified torque numbers have left their mark in the 0 to 60 sprint, with Jeep reps claiming that the Magneto can hit that mark in 6.0 seconds flat. The Magneto comes equipped with four battery packs. One replaces the gas tank, and the other three are positioned in areas where they can be protected from stray rocks or obstacles. A pair of traditional 12-volt batteries power the remaining stock Wrangler bits and accessories, including the powerful Warn winch that’s mounted on the front. One big consequence is that all the electrified hardware adds a massive amount of weight to the Jeep, with the concept weighing in at 5,750 lbs. It will be interesting to see how all that heft affects range, but Jeep is so far keeping that particular detail under wraps.

The Future In A Distinctly Retro Wrapper

The Wrangler Magneto also stands out because it does not go all-in on its attempts to emulate the future. Instead, it retains the current-generation Wrangler’s bodywork, albeit with some minor changes. The front fascia is roughly stock, but Jeep designers added several lighting elements in the front grille work, unifying both headlights. Bold Magneto graphics adorn both front fenders, while splashes of blue, black, and white hues help make the Magneto a true attention grabber. A two-inch lift and 35-inch off-road tires help give the Magento plenty of poise on the road less traveled, and some of Jeep’s press photography suggests that it could be a very formidable rock crawler as well.

The two-seat interior is also awash in Surf Blue accents, and a powerful electric heater helps keep things nice and warm during cold nights. The leather seats feature royal blue and black inserts, while darker sapphire blue also is splashed in select areas of the cabin.

Will The Magneto Spawn a Production Version?

While Jeep engineers proved recently with the Wrangler 392 that they are indeed capable of satiating the insane desires of their brand’s fan-base, we think that the Magneto’s road to production is not as clear-cut. Jeep did confirm that the Magneto will be attending the next three Safari events with engineers using the time to refine certain aspects of the concept, including the electric motor. It’s not known what will eventually result from all of this rigorous testing. Still, Jeep is looking to the future, especially as the off-road market rapidly evolves into one where green technology will play a more prominent role moving forward.

In the meantime, we’ll certainly keep our eyes peeled for any developments, especially if Magneto succeeds in getting the green light from Stellantis executives.