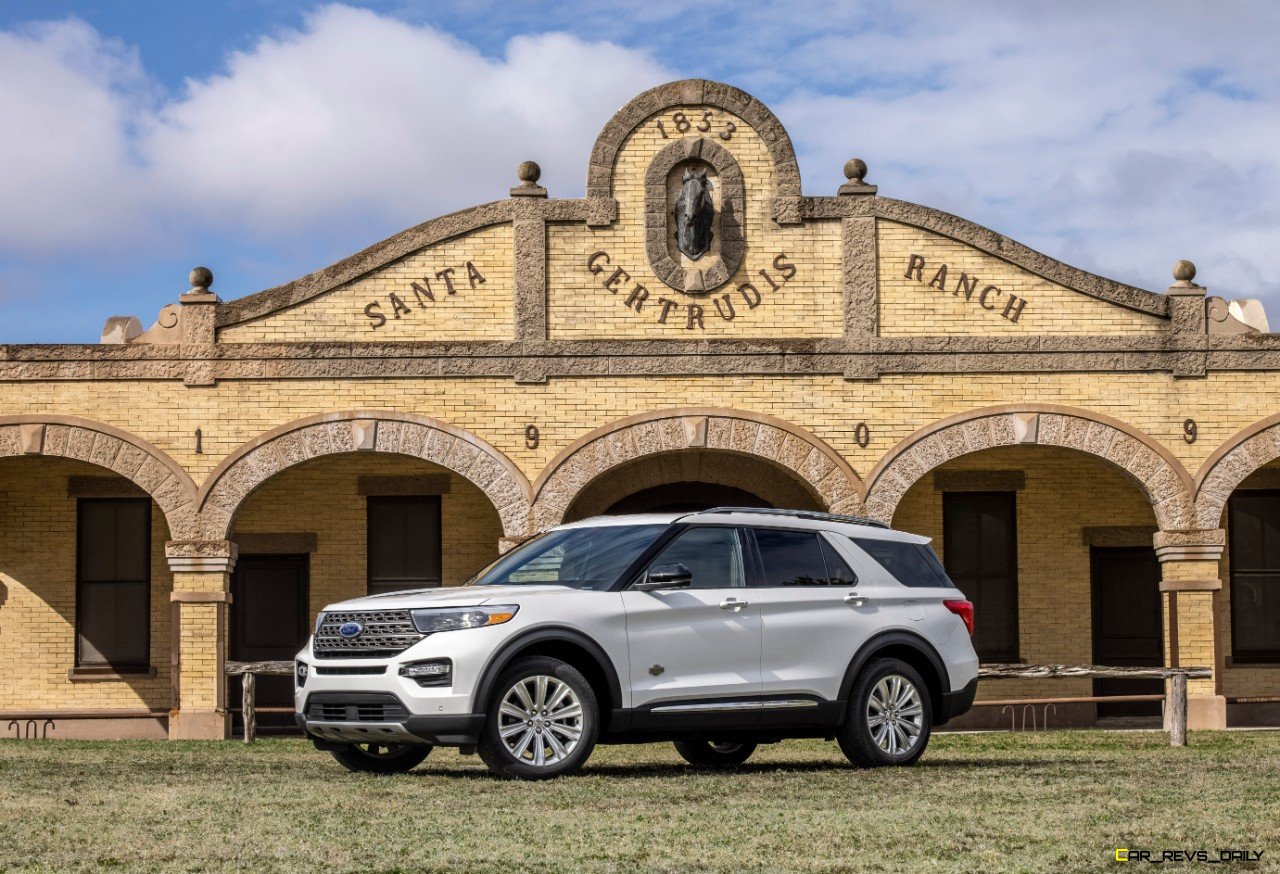 When Ford first teased an all-new King Ranch model was on the way, the company initially was vague on what model will be adorned with the wild west theme. We initially suspected the Explorer, but the brief teaser video was lacking in detail. As it turns out, we were on the right track with the Blue Oval officially unveiling the 2021 Explorer King Ranch.

The core design language is mostly unchanged, but prominent King Ranch badges immediately broadcast that this isn’t your average Ford Explorer. The front grille is replaced with a Stone Gray hued mesh one, and quad exhaust tips round out the exterior changes. This fits with the King Ranch’s role in other models, with the trim being a proverbial bridge between the Limited and Platinum models.

Ultimately it’s the inside where it all comes together, and Explorer buyers will be very pleased with what they see. Brown Del Rio leather is splashed throughout the interior, while Sapele open-pore wood accents are added to the dashboard and the steering wheel for an extra touch of old-school charm. The King Ranch W logos are also present, with the branding being used on the seatbacks and the center console.

But what if you want to infuse some modern technology into the wild west motif? Ford has you covered with the optional Premium Technology Package. Check this box in the options list, and you can equip the Explorer King Ranch with multi-contour front seats with built-in massage, a 10.1-inch touchscreen infotainment system, and a 14 speaker Bang & Olufsen sound system that was actually engineered specifically for the Explorer’s cabin.

Performance for the 2021 Explorer King Ranch will come from the range-topping 3.0 liter EcoBoost V6 which also sees duty in the ST and the Platinum models. Power remains unchanged at 365 horsepower with torque also retaining its 380 lb-ft rating. However, the King Ranch puts a small twist on this setup by being the only 3.0 liter equipped model also to have the ability to be rear-wheel drive. That’s important since the Platinum and the ST come with an all-wheel-drive system standard and don’t have a rear-wheel-drive option. A standard trailer tow package allows the Explorer King Ranch to tow up to 5,600 lbs, and Co-Pilot360 bundles an impressive array of standard driving aides into one place.

Ford revealed that the first King Ranch Explorers will be making their way to showrooms this spring. The timing is intentional, with the Explorer King Ranch launching on the 20th anniversary of the first-ever King Ranch adorned model (the 2001 F-150.) Pricing is partly determined on which drive style you choose, with the base rear-wheel-drive model starting at $52,350 and the all-wheel-drive model ringing in at a slightly higher $54,350.

The Explorer King Ranch will also form a two-punch combination for the Explorer, with the luxury-oriented trim being joined soon by an off-road-focused model. Unlike the King Ranch, there’s still some uncertainty surrounding the formal name, with FX4 and Timberline monikers all being tossed around.