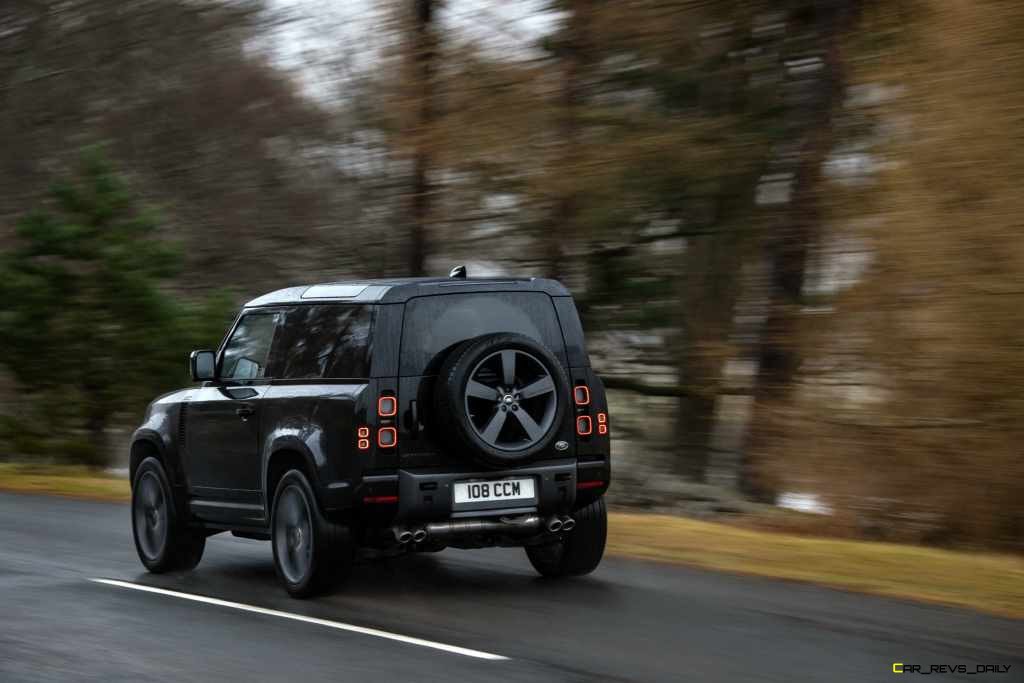 When we had the chance to review the revived Land Rover Defender, we liked how it managed to add a new twist to an endearing icon. But while the turbocharged mild-hybrid inline-six is a welcome slice of power, it was quite obvious that the platform was capable of handling much more power. Land Rover engineers have apparently heard our musings and unleashed the 2022 Land Rover Defender V8.

Muscular V8 Transforms The Defender V8 Into a Beast

It’s not very often that we highlight the performance hardware first, but in this case, the Defender V8 is all about promoting what’s under the hood, and we think buyers will be very pleased with what Land Rover has delivered. Lift the hood, and you will find the same 5.0 liter supercharged V8 that usually sees duty in some of the racier Jag and Land Rover models. In the Defender, it produces 518 horsepower and 461 lb-ft of torque. All of this power is routed to all four wheels through an eight-speed automatic, which allows the Defender V8 to make the sprint to 60 mph in 4.9 seconds and a top speed of 149 mph.

While the addition of this V8 might seem like it would transform the Defender into a barely controllable gimmick of an offering, Land Rover engineers made sure that the whole package was beefed up to handle the extra muscle. Larger anti-roll bars help reduce body roll while the electronically controlled differential gets an all-new yaw controller to help the box-shaped SUV corner better. As expected, the Defender V8 also adds a dynamic mode to its Terrain Response system. For those that have spent some time behind the wheel of older SVR products, it largely does what you think it would with the system sharpening throttle and suspension responses.

Land Rover stylists opted to leave the exterior mostly unchanged, with the bulk of the changes taking place underneath the skin. However, there are still some minor changes that help blow the Defender V8’s cover. A prominent one are the Xenon Blue front brake calipers which are a vivid contrast to the 22-inch wheels and are reminiscent of massive glowworms. Other additions include quad exhaust tips and the choice of three exterior colors (Carpathian Grey Yulong White and Santorini Black.) Buyers looking for more exclusivity can opt for the Defender V8 Carpathian Edition. Using Carpathian Grey as its color of choice, this model’s equivalent of a Launch model features Carpathian hued skid plates and Narvik black accents on the hood roof and tailgate.

An unusual addition is using a special clear film that works with the semi-matte finish to help protect the exterior from damage. Similar film applications are trendy add-ons in the aftermarket, and it’s not very often that we see the factory apply a protective film over the paint like this.

The interior of the Defender V8 is mostly unchanged from its 2021 sibling, but it’s also previewing a few changes that will trickle their way to the rest of the Defender lineup. The Pivi Pro-powered infotainment system is still present, but buyers can now opt for a larger 11.4-inch touchscreen if they feel the 10.0-inch screen is not quite large enough for their needs. A wireless charging pad is also standard on the Defender, which helps it catch up to some of its rivals. Defender V8 models add Ebony Windsor upholstery, as well as an Alcantara-covered steering wheel.

Three new Design Packs will also be offered for the 2022 model year, but all three will mainly focus on improving the aesthetic side of the Defender. The Bright and Extended Bright Pack adds more chrome to the exterior, while the Extended Black Pack flips the script and adds Gloss Black accents in the same places. This helps Land Rover further build on the Defender’s ability to be a very configurable canvas and allows the Defender to reach out better to younger buyers who want the rugged look but would much rather use it to show off plowing through trails.

Land Rover chose not to unveil final pricing for the model just yet or when it arrives in dealerships. However, look for the pricing here to be a noticeable step up from other Defender models equipped with either the four or six-cylinder engines. As for availability, that will depend on many factors, but it’s no secret that Land Rover has been having trouble getting the Defender to U.S. showrooms in sufficient numbers.

A quick inventory search at the two closest JLR dealers near our Metro Detroit Branch revealed only 27 examples in their combined inventory pool with no Defender 90s whatsoever. We’ll keep an eye out for any further developments and will keep you updated on any further developments as they become available. In the meantime, look for this model to perhaps be the last hurrah for the supercharged V8 considering that JLR plans to have an all-electric lineup in a few years.