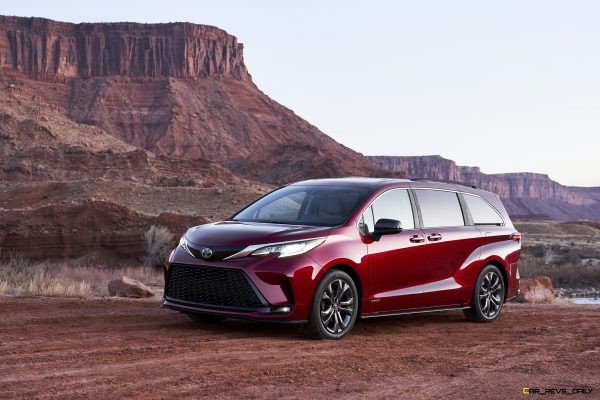 It has been awhile since a major shakeup has occurred in the minivan segment. While the redesigned Chrysler Pacifica cemented FCA’s role as a potent benchmark in the segment, others have been aging not so gracefully. One of these offerings is the Toyota Sienna. Last updated back in 2011, the Sienna was in dire need of an update with aging styling and powertrains handicapping its sales potential. Toyota is out to right the ship though, and has formally unveiled the 2021 Toyota Sienna which aims to revitalize the Sienna nameplate while also bringing in new technology as well.

A Minivan With SUV DNA?

The most immediate change that buyers will notice is the new exterior design for the Sienna. Toyota claimed that the Sienna is a minivan with SUV styling characteristics, and when one looks at the strong selling RAV4 and Highlander, it’s easy to see why Toyota wanted to bring some of the magic from these models into the Sienna. The basic minivan shape is still intact with a short hood and boxy profile being boldly present. However, the lower front bumper features a much bigger opening and the side profile has muscular sculpting that embodies enhanced athleticism while also giving it a number of CUV styling traits. The rear fascia is perhaps the most exciting element of the design, and it certainly has been awhile since we can say that of a minivan. Plenty of curves and creases pop out to the eye, and the droopy taillights do their best to further enhance the van’s aggressive stance. Our favorite feature though is the little tail that juts out from above the Sienna logo. It’s very reminiscent of the Supra’s, and it’s nice to see Toyota designers pay homage to the two seater with this thoughtful addition on the Sienna.

The interior of the 2021 Sienna has also undergone its fair share of changes, and it is a very welcoming improvement over the old model which was clearly starting to show its age. A totally new bridge console serves as a very prominent design element, with Toyota claiming that it wanted to make it less upright and eliminate some of the bus like feeling that defined the old model. The bridge structure here is supposed to make this iteration of Sienna feel more like a low slung sedan or CUV which would be a radical departure from the typical minivan design. All the space that buyers are used to can now be found underneath the bridge, with the space having enough room to store a purse or bag. A wireless charging pad is available for phones, and the van now comes equipped with 18 different cup holders.

Nestled on top of the climate controls is a standard nine inch touchscreen infotainment system, and while it lacks the sheer size of the 12.3 inch displays that we have seen in other Toyota models, it still look elegant and comes jam packed with features. These include standard Apple CarPlay and Android Auto capability. Amazon Alexa is also on board, and it comes with seven different USB ports. The Sienna also comes with a wide swath of drivers assistance technologies, with highlights including a rear seat reminder, adaptive cruise control, digital rear view mirror, blind spot monitoring, as well as rear back up sensors. The second row seats have also been revised, and have a wider degree of motion than before with either six or eight passenger capability available. The enhanced motion helps improve cargo room, and even spurred Toyota to offer optional footrests for passengers to truly stretch out and relax.

All In On Hybrid Power:

With all the enhancements that Toyota made to the exterior and the interior, they saved their biggest gamble for last, with all Sienna models coming equipped with hybrid power only. This means that lurking under the hood is a 2.5 liter four cylinder engine that is paired with two electric motors. Total system output is 243 horsepower and Toyota claims that the van is capable of achieving 33 mpg in combined driving. Toyota chose to not release formal 0 to 60 times, but we suspect that the Sienna will not be chasing quarter mile times at the local drag strip anytime soon. The 2021 Sienna can be equipped with either front or all-wheel drive, but Toyota chose to not create a PHEV variant which leaves the Chrysler Pacifica as the sole PHEV equipped minivan on the market.

Underpinning the new Sienna is a version of the company’s TNGA-K platform which is also found on the Highlander, RAV4, Venza, and other Toyota models. We suspect that the structural improvement s that the platform has brought to these models will undoubtedly make the Sienna a decent driver especially for its segment when dressed up as an all-wheel drive model. Toyota execs revealed that the all-wheel drive system can send up to 80 percent of the engine’s power to the rear wheels, with Sport mode unlocking a special boost feature from the hybrid system that is capable of enhancing acceleration. Toyota also designed the electric motors to assist with cornering in a novel attempt to reduce understeer.

An XSE model will also be available too for those that want to have a bit of sport in their minivan experience. No additional power will be on hand here, but rather, the XSE model will focus on sharpening the van’s handling characteristics with a stiffened and lowered suspension being on the menu. Massive 20-inch wheels serve as a visual trademark, and work nicely with the darkened trim elements that are on this flavor of Sienna. Toyota even goes out of its way to say that the Sienna XSE would be at home on the racetrack and we would be hard pressed not to agree with them on that statement.

Toyota did not release pricing for the 2021 Sienna as of yet, but the van is slated to go on sale towards the end of the year, and we hope that more information on that front will be revealed closer to its official launch.