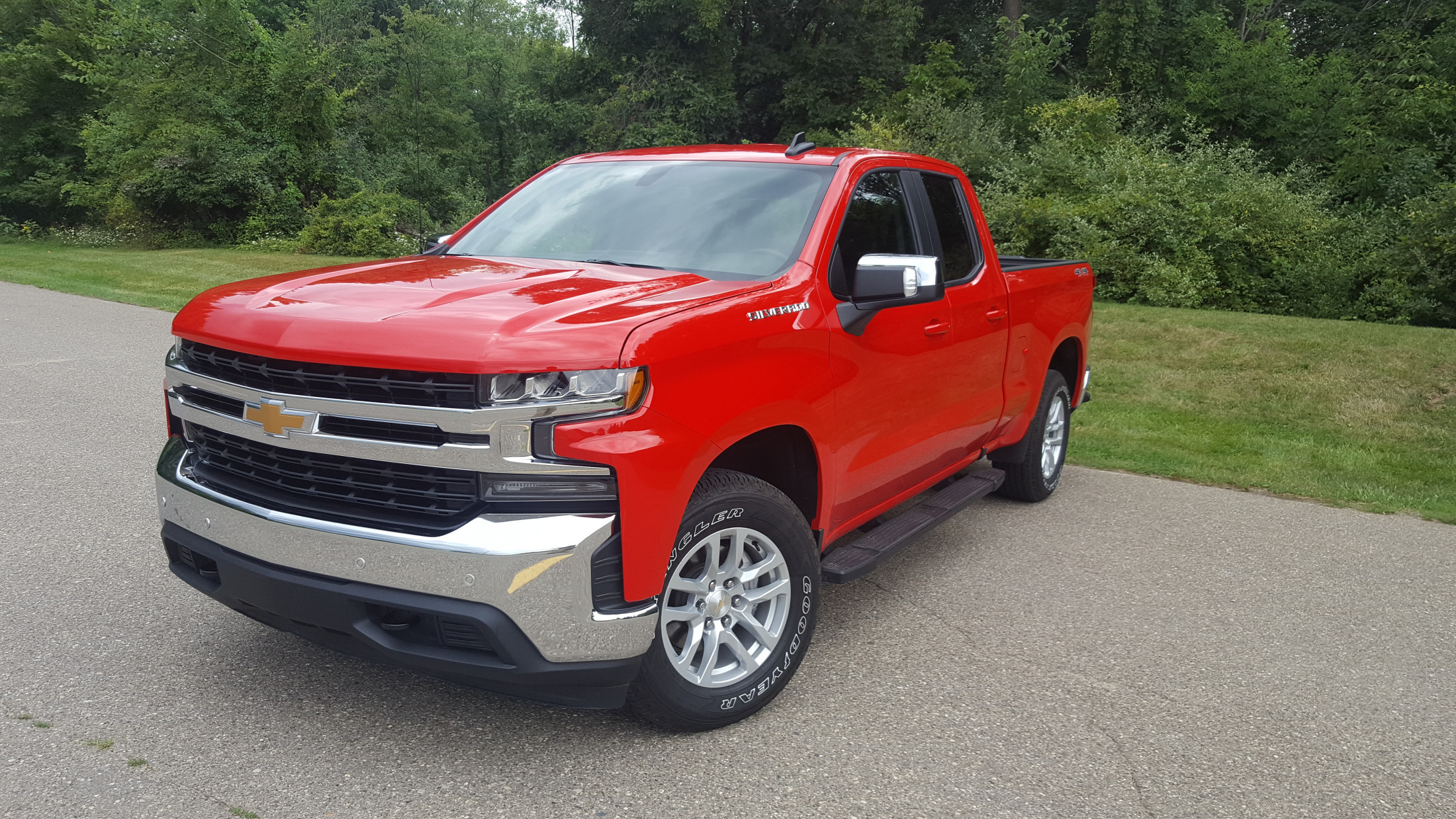 Not too long ago, the very thought of a four cylinder full sized pickup truck was seen as a pure fantasy. Back then, a V6 was the lowest anyone could go both in cylinders, as well as price. But times are changing, and with Ford dropping a bomb on the segment by unleashing the turbocharged 2.7 liter EcoBoost V6 on the world, Chevrolet knew that it had to do something completely out of the box to help the Silverado stay relevant in the full-size pickup truck segment. With Ford turbocharging the V6, the bowtie brigade decided to go in an unexpected path, and bring the world’s first turbocharged four cylinder to the domestic pickup wars. But has Chevrolet’s big gamble produced a hearty profit? or has it put the venerable Silverado in a whole when compared to the F-150 and the Ram 1500.

Unlike other pickup offerings, our LT grade tester managed to prove that dropping cylinders does not mean losing out on owning a good looking truck. It all begins with the bold red paint of our tester which gave it an athletic stance, and it even managed to work nicely with the splashes of chrome trim that are a part of the LT transformation. The side profile too has a very functional look to it, and we like the way the double cab configuration seamlessly fits with the rest of the Silverado’s proportions. However, the rear fascia is arguably the Silverado’s most controversial element, with the large tailgate contrasting somewhat awkwardly with the small taillights. the rear bumper comes with a step integrated into either side that helps enhance access to the bed, but we prefer the integrated bed step utilized by Ford for this particular task. It’s also a tough sell when it is compared with its GMC sibling, with the Sierra having more unified bodywork despite the strong platform and design similarities between the two trucks.

Unlike the exterior of our red test truck, the interior is arguably where the scope of just how far behind the Silverado is in terms of design, technology, and even refinement comes into sharper focus. When compared with both the F-150 and the Ram in XLT and Big Horn/Laramie guises respectively, the Silverado has cheaper feeling interior plastics, and its slab sided low rent motif seems to be a step or two behind the Ford and the Ram’s nicer appointments. Chevrolet’s MyLink infotainment system still impressed us with its intuitive icon placement, as well as the ease of use for many of its features, but our tester did not have formal navigation, with that duty being left to OnStar. We chose to use Google Maps printouts instead, especially for our trek to the Woodward Dream Cruise. We hope that Chevrolet will eventually add standard navigation considering that it was odd to not see it in a truck that surpasses the $45,000 barrier. The big rear pillars also create massive blind spots, and we heard a few creaks and rattles from a few spots when going about the rigors of the daily commute.

But amid all the frustrating quirks that defined our tester, we were also grateful for the Double Cab configuration and the amount of space it provides to passengers. Like other extended cabs, the rear seatback is decidedly more upright than what you would find in a traditional crew cab model, but it still managed to keep occupants back there very comfortable. Chevrolet says that rear leg room is best in its segment, but taller passengers will still find things to be a bit tight back there when seated behind a taller driver, meaning that this space is best served for occasional use versus being a go to option for long journeys. Thankfully, Chevrolet designers were kind enough to install front hinged rear doors, which are more user friendly than the annoying clam shells that are used on the F-150 Super Cab. Look for this to also be better for buyers with small children that might accidentally damage the clamshells if they do not close them in the correct order.

As in other pickup offerings, the Silverado’s rear cushions are 60/40 split, and also flip up to improve cargo and storage space. There are a pair of USB ports as well as vents for passengers that spend time back there, but the latter items are mounted so low that they will more likely serve as floor ventilation to help warm there feet. To be fair, this is mostly due to the seating configuration in our example, with the front seat having a middle bench in lieu of a center console. Brave souls that do sit there will find a throne that has a shorter backrest than the Ram 1500, but it still manages to deliver commendable amounts of comfort especially for shorter occupants. But look beyond this, and you will discover a very capable hauler, with storage space in grand abundance. This includes a generously sized bin under the seat, an equally generous bin mounted below the armrest, two large cupholders, and a good sized storage nook to store your phone or other mobile device.

Turbocharged Four Cylinder Punches Above Its Weight In Nearly All Categories:

As mentioned at the beginning of our review, the big change is found under the hood, with our tester featuring the optional 2.7 liter turbocharged four cylinder engine. Good for an impressive 310 horsepower, this boosted four banger replaces the ancient 4.3 liter V6 in LT and RST models (it gets moved instead to WT trim Silverados), and is a marked improvement over its predecessor. Start the engine, and you are greeted with a quieter idle, and a start up procedure filled with less audio drama. Cruising around town also reveals a quieter freeway ride, with the engine noise not permeating the cabin as much. Mash the throttle down, and instead of the angry roar of a V8, you are greeted with the quiet yet noticeable whir and turbocharger sounds that are typically found in many hot hatch models. The experience does take some getting used to, but we suspect that many new owners will eventually learn to embrace this new reality. Just be prepared to open the hood a few times to answer questions from curious observers. Our tester like other 2.7 liter equipped examples does not have any form of visual badging or identifier trim to denote its unique status, and from the outside it looks like your average run of the mill chrome laden LT spec Silverado.

The sprint to 60 mph takes 6.8 seconds, but once you are formally underway, the four cylinder fades rapidly into the background, with the engine not making much of a fuss. Instead, the turbocharger makes its presence felt, and the noise almost makes it seem diesel like in certain regards. The turbo wastegate is the one annoying element in this audio presentation however, and there were occasions where we thought we might have had some interference in the radio before realizing that it was the wastegate all along. Again, this is partially due to us adjusting to the way the engine behaves, and we suspect the majority of owners will learn to tune it out after some time with the truck. An eight speed automatic is the sole transmission available, and it routes its gears through an old school column mounted stalk. The stalk is a reminder of GM’s stubbornness in clinging to this old shift method, and is even glaring considering that Ram and Ford has floor mounted and even rotary shifters available for options to choose from. Shifts here were smooth, and the automatic did a good job of keeping the engine in the right gear at all times.

However, the biggest flaw that the engine has is in regards to overall value, especially in fuel economy. Chevrolet claims that the 2.7 liter equipped Silverado is capable of  18-20 mpg city, 21-23 mpg highway, and 19-21 mpg in combined driving. While this is certainly an improvement over the 5.3 liter V8 which gets 17-19 mpg in combined driving, and also helps save $250 per year in fuel costs, things get much murkier when you look at the rest of the segment at large. A two wheel drive Ram 1500 equipped with the Hemi and the optional eTorque mild hybrid system managed 18.7 mpg in combined driving despite having two more cylinders, while Ford’s 2.7 liter EcoBoost V6 manages to best the Silverado’s boosted four in overall fuel economy. While Chevrolet certainly ruffled some feathers by beating Ford and Ram into the turbocharged four cylinder game, the numbers on hand here simply do not do enough to sway buyers away from the 5.3 liter, nor some of the green infused engine choices wielded by its competition. We hope that the 2.7 eventually receives some tweaks to help boost these figures since the engine itself does have some potential that is just waiting to be unleashed.

Pricing for the 2019 Chevrolet Silverado starts at $29,895 for the base WT Silverado in regular cab/long bed guise. Adding a Double Cab to this raises the cost slightly to $33,795 which is still decent pricing for a no frills work truck. But if your the majority of Silverado buyers, you will most likely opt for the LT trim which has a base price of $41,795 for the 2.7 liter engine and a higher $43,190 for a model equipped with the 5.3 liter V8. Our rig had a final sticker of $49,365 which is a hefty price to pay for a four cylinder truck. For comparison, a comparable Silverado Lt equipped with the V8 would only be $1,400 more, while a Ram 1500 4×2 Big Horn extended cab equipped with the Hemi eTorque system would carry roughly the same asking price, but pack more cylinders and a nicer interior into the functionally shaped wrapper.

While Chevrolet’s attempt to flip the pickup segment upside down is not quite the knockout punch that many folks were expecting, we will give GM credit for being adventurous in trying to give customers a new option that has never been seen before, and with the brand promising that improvement s are indeed coming to the Silverado in the near future, we are eager to see if they can help the four cylinder mesh more effectively with the Silverado’s core audience, and whether it can finally get the fuel economy numbers that will allow it to morph into a far better long time value.