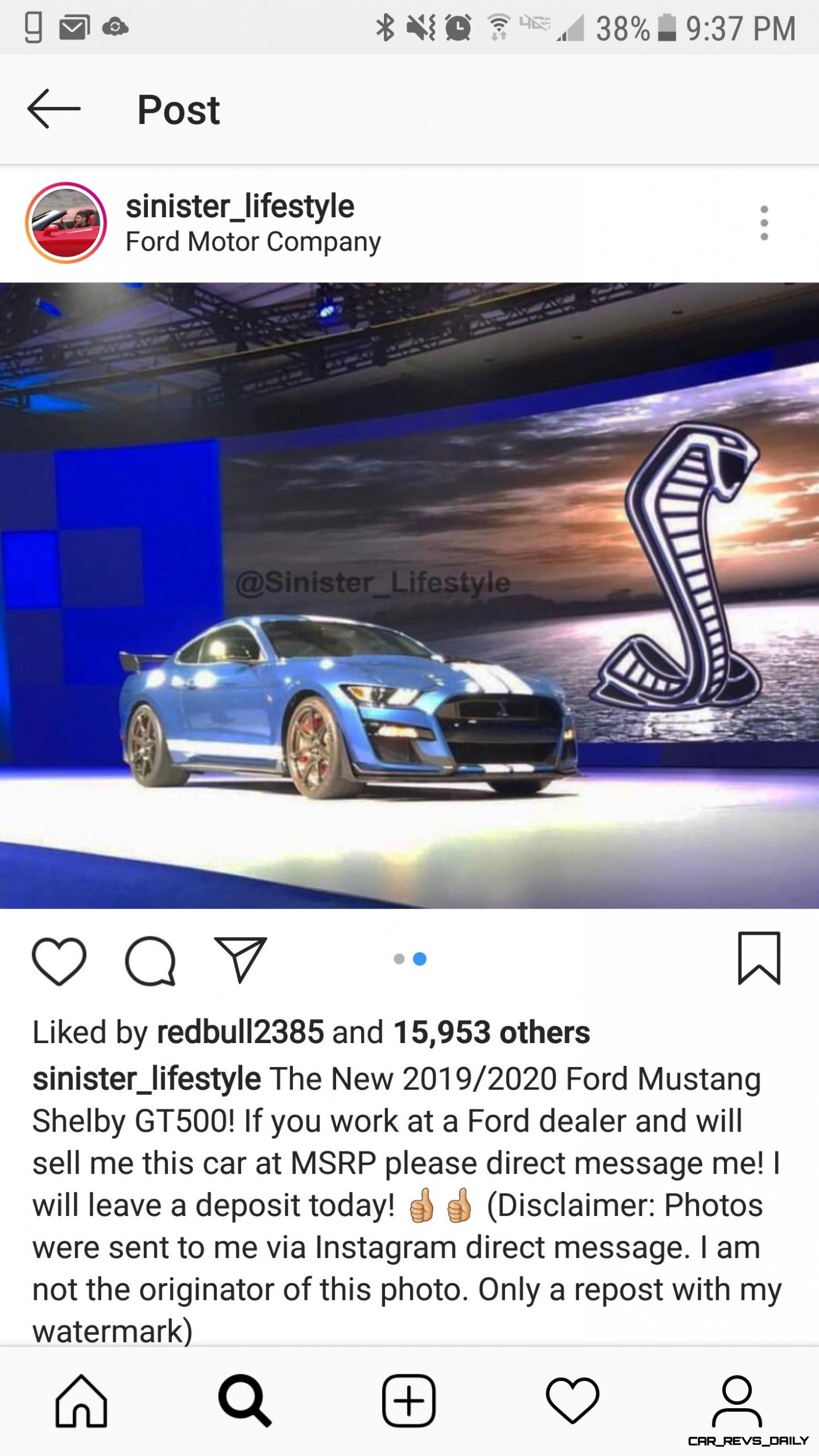 When we last saw the 2020 Ford Shelby Mustang, it was initially from above, with not much standing out other than its basic shape, and the fact it has a very lovely looking roof. Later teaser pics were released, but again not much could be ascertained. However, a smuggled in smartphone, and a resulting post on Instagram, has given the world a compelling early glimpse at Ford’s most venomous pony, the 2020 Ford Shelby Gt500 Mustang.

Published (but not taken…..allegedly) by Instagram user Sinister_Lifestyle, the duet of pics does shed some light on what is in store for the upcoming GT500. A model exclusive front end features larger lower front air intakes, and a prominently placed Cobra emblem to further embody its performance intentions. The logo has also caused some to speculate that the GT500 KR name could be revived for this GT500 run. The KR moniker has not been seen since its last appearance in the mid 2000’s, and was used on original GT500s in the 60’s to denote their unique status, as well as to drive home the “King of the Road” moniker those two letters represented.

The photo also shows a bigger rear wing, and beefy wheels that could possibly be all carbon fiber units. The gold tint could also be another clue to this being the rumored KR variant, but Ford for its part, is keeping its cards close to the hand as far as that particular front is concerned. The real mystery is what the GT500 will pack under the hood. With a rumored 700 plus horsepower on tap, a V8 is obviously on hand, but it is currently unknown if it shares its lineage with the 5.2 liter V8 in the GT350 and GT350 R, or if its an entirely diffrent engine altogether. Unconfirmed rumors have hinted at a supercharged version of this engine, but Ford has pulled rabbits out of its hat in the past, and enthusiasts could be in for a big surprise.

Look for this beast to do battle with contenders such as the updated Dodge Hellcat, Chevrolet Camaro ZL1, as well as international rivals in the bid for supremacy out on the road ways. The GT500 (KR or not) is also a crucial cog in Ford’s radical plans for the Mustang, which includes the first ever hybrid version of the iconic pony car (initially teased in the company’s new “Built Ford Proud” ad campaign. While Dodge did beat Ford and Chevrolet to the punch with the first ever all-wheel drive muscle car, the appearance of a hybrid is truly a game changing move in the segment, and the GT500’s DNA could filter down to this model to help give the car more of a family connection, while also being an indirect nod to the future. As for the GT500, look for a manual transmission to still be standard issue, but like the Camaro ZL1, we suspect the GT500 will give in to the inevitable, and offer the shared 10-speed automatic as an option for a growing segment of buyers that either cannot drive a manual transmission outright, or prefer the quicker reactions of a computer controlled unit.

Either way, this latest GT500 will truly be something special especially when it is formally debuts next year at the 2019 North American International Auto Show. In the meantime, look for more information to gradually emerge over the next few months, especially as January comes closer and closer to fruition.

In unrelated news, rumors of a four door Mustang coupe have also arisen amid the attention generated by the GT500. This particular model would be the latest to take advantage of the recent craze surrounding the four door coupe. Once a novelty mainly reserved for European marques, the Mustang four door coupe would bring yet another first to the segment, and it would also signal a shift in the way that buyers would view muscle cars, especially considering their origins as mainly two door coupes.