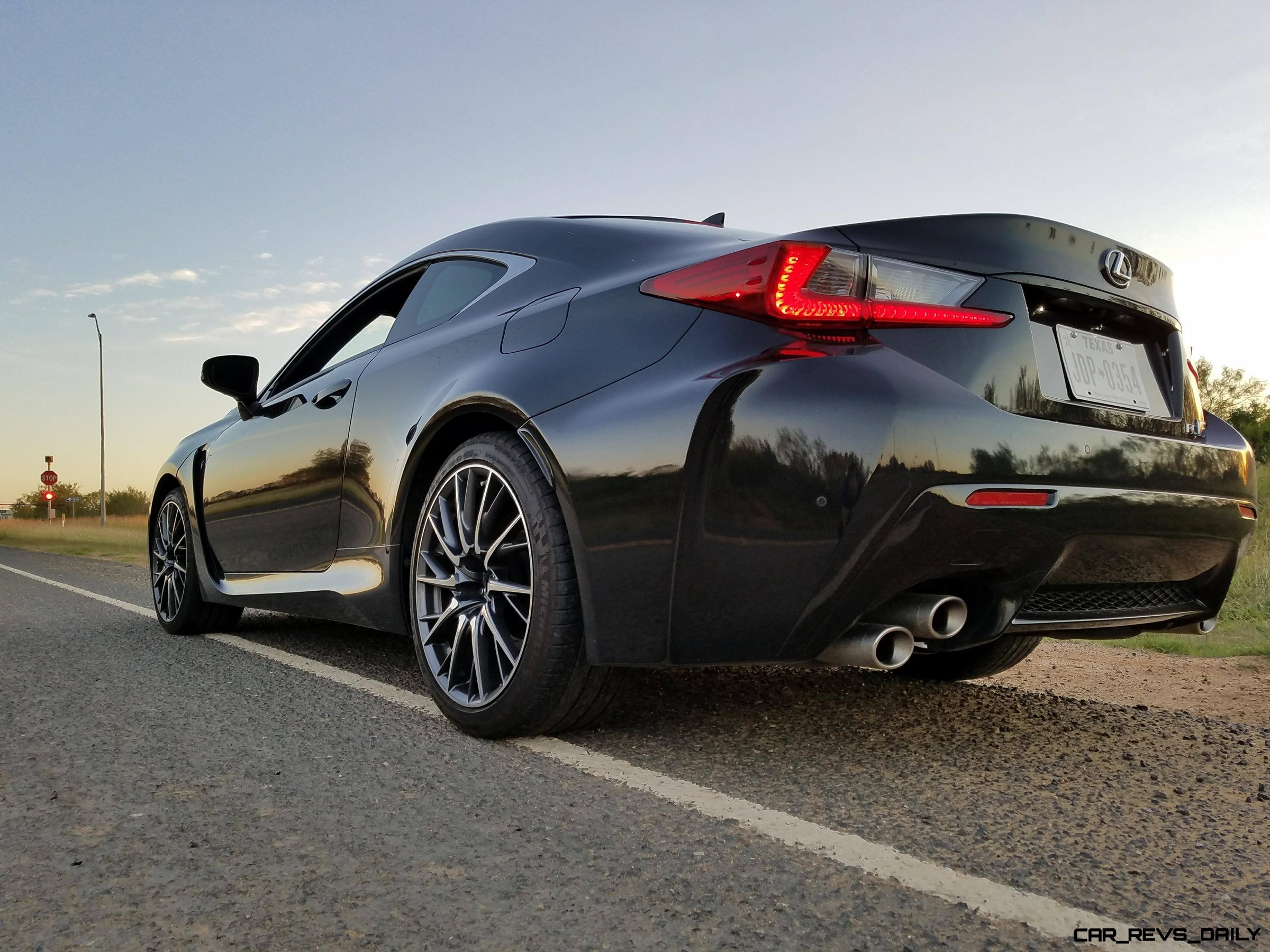 Having a two-door luxury sports coupe for Thanksgiving can give anyone a lot to be thankful for. Especially when the coupe in question is the 2017 Lexus RC F; a V8 powered Japanese GT car with some serious attitude underneath its sleek and professional exterior.

I had two weeks to get well acquainted with this car. Compared to the last Lexus vehicle I tested, 2017 Lexus IS 200t, this was the other end of the spectrum.

This was the first car I drove that had carbon fiber, suede, and leather surrounding the interior. Thanks to a $3,240 premium interior option everywhere you touch is a different texture. The RC F is a higher trim level than the standard Lexus RC 350. That means you get F-sport NuLuxe trimmed sports bucket seats with F-sport embossed headrests.

I took this car on several long distance journeys which required me to stop for power naps. The sport bucket seats may look like they belong in a race car but every time I woke up I had to remind myself that I was inside a car not in bed. The rear seats aren’t just for show either as people can actually sit comfortably and not feel like a sardine. The ride may be a little bumpy since this is a performance car and those rear seats are almost on top of the rear axle.

Lexus’ infotainment center is still clumsy and not very pretty to look at. The touch pad feels like a laptop which make you want to use it like one but it can also be pushed down which throws you off. This means that it can be distracting when you are first getting used to it. I much rather have a dial for a cursor or old fashioned buttons. The large dial next to it controls the drive modes and differential settings, aka the fun dial.

The best feature, in my opinion, was how silent the interior is on the road. Quiet enough to meditate (Don’t recommend while driving), and allows you enjoy the rumbling exhaust note from the 5.0 V8 directly in front of you.

The color is named Caviar, which I got a kick out of, and looks black at first glance but is actually a dark metallic shade of grey. Matched with hand polished 19 inch alloy wheels, and the red F-sport interior, it looks outstanding. The Lexus RC F has more than one good side and I caught people giving it double takes when I drove it on the street.

This test car had a $5,500 performance option that included a carbon fiber roof, speed active carbon fiber rear wing, and a torque vectoring rear differential. The TVD splits power between both rear wheels and is smart enough to know which wheel needs more power to keep you on the road, or on the track. The TVD gives you two settings, Slalom and Track, and will stay in Standard for normal driving.

The carbon fiber may not be everybody’s taste, but it does give the RC F an extra performance look to it. A sign that this isn’t just another soft luxury GT coupe. I wanted to hate it but found myself admiring it before getting inside.

Performance and Specs on the 2017 Lexus RC F

Lexus offers several engine options for the RC. Entry level offers a turbo 4 cylinder engine and higher trim levels get a choice between 2 different V6 engines with the option of AWD.

The Lexus RC F, however, is the bad boy therefore it gets a brawling naturally aspirated 5.0 liter V8 with 467 horsepower! Rear wheel drive, and an 8-speed transmission, means this is a Japanese muscle car. Shame no manual transmissions are offered because the gear lever is right where you would want it to change gears. Very ergonomic.

It drives as good as it looks. It won’t intimidate when it’s idling, but put your foot in it and the 5.0 will perform a baritone solo that will make you reconsider lifting off the gas pedal.

Keep a close eye on that digital speedometer in the center of the dash because the RC F accelerates 0-60 in 4.4 seconds and sprints into triple digits faster than you can say, “Wow this thing can move!” Six piston brakes in the front, and 4 piston in the rear will bring the stampede to a halt.

You get 4 different drive modes in the RC F:

Changing between drive modes changes the dash lighting and provides a digital outline of the RC F highlighting which components are being altered depending on the setting. Each mode is noticeable and you can hear a subtle difference in exhaust notes as it gets louder the sporty the setting.

I averaged 23 MPG over my two week adventure with the RC F which is not bad for a nearly 4,000 pound car with a V8. It only takes premium fuel and gets an estimated 330 mile range off its 17 gallon fuel tank so you may become friends with your neighborhood gas station attendants if you have long commutes.

Overall, the 2017 Lexus RC F is a great performance car. It will make you giggle and terrify you at the same time. The 5.0 V8 is responsive to your right foot and will give you all it’s got if you tell it to. This is a driver’s car, so take care if you decide to switch off traction control. The trunk opening is narrow so you will struggle to get a set of golf clubs inside. Also, the glove box is surprisingly small. I’m amazed the owner manual fits.

When people asked how much this test car costs they felt it was overpriced, and if you consider the number of vehicle options with more horsepower for your dollar it is easy to see why. Nevertheless, the 2017 Lexus RC F delivers performance, style, luxury, comfort, and is very capable of good old fashion hooning. I like it!

Keep up with Jesse’s latest via this RSS feed link or via his Instagram!

Keep up with Jesse’s latest via this RSS feed link or via his Instagram! Jesus “Jesse” R. Garcia is a young creative writer who just happens to be obsessed with all things automotive.
He collects project cars with his father on a small family ranch in Texas. Jesse may be younger than most, but not for long.
His knowledge comes from being around vintage cars all his life, working in the auto industry, and of course a passion for enthusiastic driving.