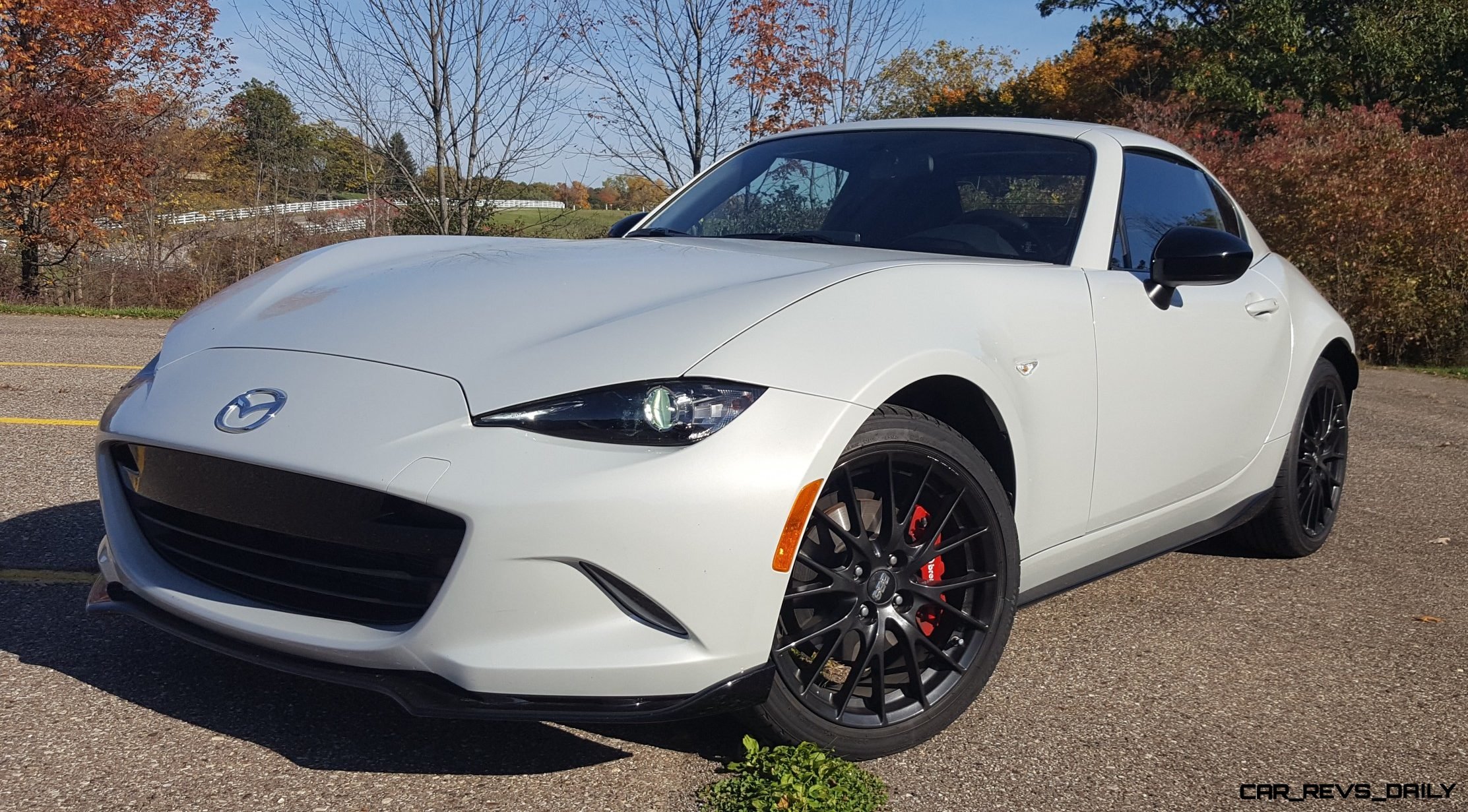 When we last met the 2017 Mazda MX-5 RF, we praised the fastback for offering a hardtop alternative to the venerable soft top variant, as well as giving customers better protection from the elements.

However, the one thing we missed was the doses of sporty character that other MX-5’s are known for (mainly due to our tester being a luxury oriented Grand Touring model.)

To find out if the wait was indeed worth it, we spent some time with the MX-5 Club to see if it could stand out in any discernible way from its slightly more sedate cousin.

At first glance, the exterior styling of our Ceramic Metallic tester is largely unchanged from the rest of its ND platformed brethren, and that’s not necessarily a bad thing.

Flowing creases, sharp lines, and a distinctly crisp design language help the MX-5 stand out against many of its competitors including those that are often twice its modest MSRP price. However opt for the Club trim, and you are rewarded with several trim exclusive bits that add a dash of spice to the MX-5’s perfectly delectable canvas.

Our personal favorite are the optional $3,400 BBS wheels that are finished in a slick shade of black, and also offer curious viewers compelling peeks of the optional bright red Brembo front brake calipers. Like before, the trick folding roof looks handsome, though the rear pillars do produce hefty blind spots that can make lane changes a bit challenging, and wind buffeting is still an issue with the roof down.

The interior of our tester also retains the exceptional driver centric layout that buyers have come to expect from this venerable two seater and it is a very comfortable place to spend time in. Unlike Grand Touring models, Club variants feature heated cloth seats, and we actually prefer these seats over the leather seats in the Grand Touring model for two reasons.

In addition to eliminating periodic applications of leather cleaner from your maintenance routine, the cloth seats also have better support, and are much more rewarding when the RF is pushed hard on twisty roads. The lone complaint is that these seats do not feature the headrest mounted speakers that are seen in the leather seats, their respective omissions results in the stereo not having good sound quality, especially when certain songs are on the air.

Entering and exiting the RF is not exactly the most graceful motion that will ever be attempted by human beings, but once your nestled inside, there’s a decent amount of leg room, and many controls are within easy reach of the driver.

The infotainment system still performs admirably, but it has not aged well in terms of usability, and features laggy inputs, as well as a control wheel that makes selecting music and other functions unnecessarily frustrating when out on the road. We can’t wait to see Mazda eventually replace this system with a unit that not only improves functionality, but also allows it to be a better match for infotainment systems wielded by many of its rivals.

The Club also offers slightly sharper handling characteristics, though it will take a very experienced driver to notice them. This MX-5 feels a bit more composed in sharp turns than the Grand Touring version, and it even channels the very essence of sport better as well.

Like before, the 2.0 liter four cylinder engine is spirited, but its meager 155 horsepower and equally modest torque figure relegate it to being a back road blitzer versus an all out monster out on the freeway. Freeway speeds also revealed alot of tire and wind noise, but the sporty suspension does strike a nicely honed balance between comfort and handling. Braking in our tester was secure and composed, with the Brembo front brakes delivering more bite and high speed stability versus the standard brakes.

Our tester channeled its muscle to the rear wheels through the familiar 6-speed manual gearbox. An automatic is also available, but we still recommend sticking with the manual for higher levels of fun and substance.

Unlike some of our other Michigan visitors, the MX-5 had the opportunity to hit the books when it visited the Romeo District Library, where it served as transportation while I was supporting a retro gaming night held by one of my girlfriend’s co-workers. The trek to the library revealed how bright its LED headlights were, and they even swivel when turning in corners, which is a welcome feature in night time driving.

Pricing for the 2017 Mazda MX-5 RF starts at $31,555 with Club models like our tester serving as the base trim in RF guise. Options as well as the $835 destination charge helped our tester reach a final out the door price of $35,790. This pricing puts it in the cross hairs of some of its rivals including the Ford Mustang, Toyota 86, as well as unconventional rivals such as the Porsche Cayman, and the Europe exclusive Mercedes SLC 180 roadster.

When all is said and done, the RF is a compelling alternative to conventional performance cars, but even in Club guise, we still find ourselves gravitating towards the roadster and its open air charms, as well as its slightly cheaper price tag.