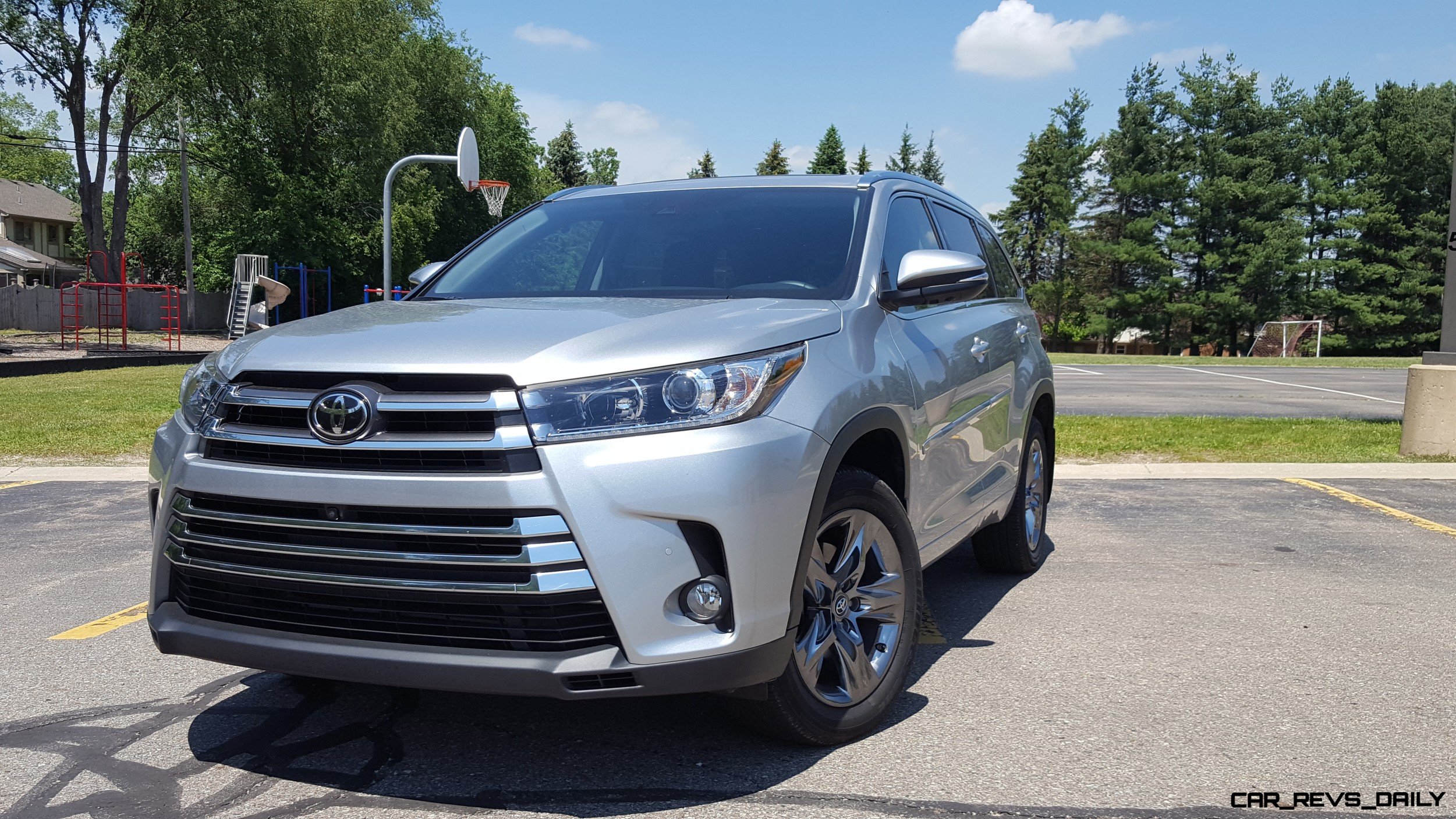 Three row SUVs have always possessed a special spot in the minds of many family buyers. With enough seating for a whole family, as well as tremendous amounts of cargo space, these bruisers have become a must have tool for many families. The Toyota Highlander is one of the top entries in this class, but can the updated 2017 Highlander allow Toyota to continue its winning ways? Or have they caused the Highlander to lose some ground to a growing crop of SUV rivals?

The exterior styling of the Highlander was lightly revised for the 2017 model year, and our Silver Metallic Limited Platinum model certainly looked handsome from many angles. While the overall look will not exactly rewrite the book on elegant styling cues, the Highlander manages to be an all around effort with the front fascia featuring a revised front grille as well as tweaked headlights that still allow the Highlander to retain much of its ready for anything persona. The rear fascia shows off its sporty derived themes, and the LED tailights on our tester looked sharp during day and nighttime driving.

A highlight of our rig was its sharp 19-inch “Chromtec” smoked alloy wheels which added a subtle taste of sportiness to the Highlander’s lines, and certainly standout against the more mundane wheel choices that the Highlander has to offer. While some rivals like the Ford Explorer and the Nissan Pathfinder may have more refinement and polish than the Toyota, the Highlander represents a solid balance of functionality and style, which should please many buyers looking for a balanced all rounder.

The interior of the 2017 Highlander also reflects Toyota’s continued commitment to offering high degrees of comfort and functionality. Head and legroom is abundant, while shoulder and leg room is equally generous. This is especially apparent in the second row with our tester featuring the optional captain’s chairs in lieu of the standard bench seat. Both thrones offer seat heat, and deliver plenty of room for passengers to stretch out, especially if they want to soak in the view from the massive panoramic sunroof. The second row also gets satellite climate controls, but denizens of the cramped third row get no such luck, and they also get to experience what it’s really like to fly in economy class at your local airline. We suggest keeping the third row down anyway, since this helps give the Highlander plenty of space to swallow luggage and cargo. During our time with it, the Highlander got to prove its hauling chops in a number of ways including hauling gear to a local festival in Detroit, as well as swallowing a medium size garden hose spool and accompanying weed whacker on a separate outing.

The Highlander’s interior is a commendable effort, and while the numerous connectivity options are a nice touch, they are besieged by some of the ergonomic compromises that are scattered throughout the otherwise cavernous space. For example the center stack features a handy ledge that’s useful for storing small items, but the nook also blocks one of the USB ports and three of the other charging ports from easy view which can make them hard to find at first glance. Interior plastics are also a bit too shiny and cheap for our tastes, and we find it interesting that in an era where Apple CarPlay and Android Auto have become must have items in many automobiles, the Highlander is one of the few entries that offers neither option for tech savvy families.

Thankfully the infotainment system still manages to standout despite these notable absences, and offers buyers a diverse range of features including satellite radio, navigation, as well as Pandora and Aha radio capability. One feature that definitely still needs some work is the “Easy Speak” system. Supposedly the technology allows the driver to transmit their voice to the rear speakers via the Bluetooth microphone to talk to rowdy children without averting their gaze away from the road. However, we noticed no discernible difference in audio quality with our volunteer passengers even reporting no noticeable speech being transmitted through the speakers. Hopefully Toyota will address this with the next iteration of Easy Speak especially since the basic idea is actually very solid in theory.

Performance for the 2017 Toyota Highlander comes from a pair of engines with the familiar 2.7 liter four cylinder from the smaller RAV4 serving as the base engine. Thankfully, we did not have to repeat our mixed experience with this powerplant, and our tester arrived with the optional 3.5 liter V6. Power is now up to 295 horsepower and the eight speed automatic also helps produce considerable gains in fuel economy with the V6 actually outshining the four cylinder in mileage. The eight speed is a smooth shifting unit, but hard acceleration revealed a very tall first gear which caused more noise then we liked. Thankfully, the transmissions sport mode and its shift yourself capability does solve this problem, but other than giving the driver better control over the gears, the Highlander’s lack of sporting pedigree shows in other ways especially the noticeable tire scrub that penetrates the cabin in sharp turns as well as its numb steering.

However, when used in a manner that does not push it out of its comfort zone, the Highlander does regain some ground. The suspension does a great job soaking up bumps and divots, while freeway driving revealed a commendable degree of composure and comfort. The eight speed is lighter and more compact than the outgoing six speed automatic, and the extra gears were noticeable in passing maneuvers where the engines ample power worked well with the transmission to produce confident passing behavior. Parking the big Highlander was a challenge in some situations, but thankfully, the optional 360 degree birds eye camera is a valuable asset, and helps make maneuvering the Highlander into a tight spot easier.

Pricing for the 2017 Toyota Highlander starts at $30,630 for the base LE model with the pricing ladder climbing gradually to our Limited Platinum tester and its base $46,260 base price. Our lightly optioned tester featured $209 body side moldings as well as $225 carpet floor and cargo mats which paired up with the $940 destination fee for a final sticker price of $47,634. This pricing allows the Limited Platinum to be significantly less expensive than the Ford Explorer Platinum while also slightly undercutting the $48,490 Volkswagen Atlas SEL Premium with 4Motion.

With its cavernous cargo capacity as well as its ability to channel all angles of the SUV segment, the 2017 Toyota Highlander still has the moves necessary to carve a significant chunk out of the SUV sales pie, and we look forward to seeing the next generation Highlander, and the advances that it will bring to further broaden its horizons in a hotly contested and ever growing vehicle segment.