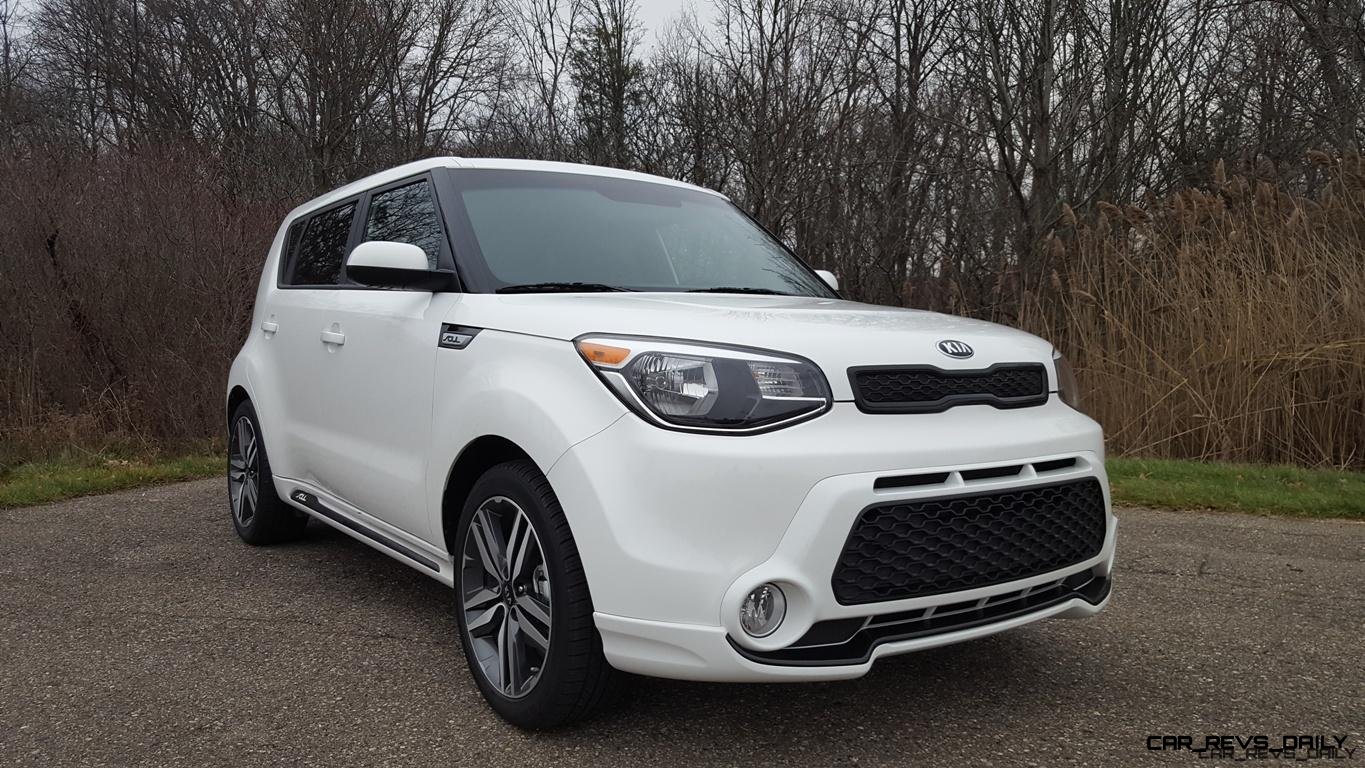 When Kia first unleashed the Soul back in 2008, the funky CUV was a bold gamble for the Korean car giant. Boasting boxy styling, youthful vigor, and an ad campaign featuring cute hamsters, the Soul proved to be a hit with CUV buyers, and prompted the company to release numerous variants including the recently launched Soul Turbo model. But has its mid-cycle update helped the Soul stay relevant among millennials? or has it lost a few steps against a new wave of CUV entries that are all vying for their piece of the greater CUV sales pie.

The exterior styling of our 2016 Clear White Soul + tester is still very boxy, but it also manages to grow on you after long term exposure. The front fascia looks a bit clumsy from some angles, but it still does a great job blending together with the rest of the car. The side profile is typical CUV (bland and functional,) but it does lead to the handsome rear fascia, and its prominent tail lights which helped the spunky Kia standout during nighttime commutes. Our car’s optional “Soulful” package featured a modest bodykit that helped add a bit more aggression to the package, and is paired with 18-inch split spoke alloy wheels as well as a leather wrapped steering wheel and shifter though we recommend pairing it with a darker color to achieve maximum visual impact.

The interior of our tester was a relatively comfortable place to spend time in with good amounts of head and legroom. The boxy shape also helps improve headroom for rear passengers, but has the side effect of creating horrible blind spots that can make backing out of a parking spot challenging at times. The problem is exaggerated by the small display for the rear view camera which also had a very grainy picture at night. Our testers cloth seats were relatively supportive with good amounts of back support, and proved to be welcome places to spend time in during long road trips. The leather wrapped steering wheel felt good in the hands and offers satellite controls for the cruise control as well as the Bluetooth hands free calling technology.

However, while we will give Kia credit for offering a switch that changes the steering feel between three modes (Normal, Comfort, and Sport) the difference that each one offered was minimal, and raised questions about why Kia did not choose to equip a formal sport mode to the six speed transmission to formally compliment this unique feature. Hopefully the Soul Turbo will address this gripe with the excellent drive mode selector that we have had the chance to sample in other Hyundai/Kia offerings. The Soul does make up for this by offering a solid audio system, as well as a spacious rear cargo area with seats that are easy to fold flat.

A key part of the Soul’s identity is its ability to still bring fun to young buyers looking for a solid value to fun quotient. Our tester came equipped with the 2.0 liter four cylinder engine which serves as the figurative middle child in the Soul engine lineup. While its 161 horsepower is a noticeable step up from the 130 horsepower offered by the base 1.6 liter, the engine has about as much soul as a slow playing 1940’s big brass band with noisy but adequate acceleration as well as relatively flat acceleration off the line. However, the biggest problem that the 2.0 liter faces is its fore-mentioned position in the engine ladder. With the newly launched turbocharged engine embracing the limelight at the moment, it is easy for buyers to bypass the 2.0 liter entirely especially since the more performance oriented engine surpasses the naturally aspirated 2.0 liter in virtually every mileage category.

Thankfully, the six speed automatic transmission does help make up for this to a degree and did an excellent job delivering smooth shifts while also allowing the + to nab an extra mpg in the city when compared to the more budget oriented base model and its 24 mpg rating. The six speed automatic in our tester also did not suffer from the same herky jerky movements that we have experienced in past Hyundai/Kia products including the Sonata Limited Turbo that we recently tested. It also allows the Soul to be on par with other CUV entries especially with the current spike in sales and demand for CUVs as a whole.

Pricing for the 2017 Kia starts at $15,990 for the Base Soul with the + featuring a slightly higher $19,650 MSRP. Our 2016 grade + tester had a base price of $19,400 with the $1300 Soulful package, $120 carpet floor mats, and the $850 destination fee pushing the sticker to a final total of $21,670. With the Nissan Cube axed from U.S. production, and the Scion xB  swept away with the shut down of the Scion brand, the Soul faces a whole different crop of potential rivals in the automotive marketplace. This includes traditional rivals such as the Toyota RAV-4, Honda HR-V, and the Jeep Renegade as well as the Honda Fit, Mazda 3 hatchback, and the Ford Focus hatchback.

Overall we like what Kia has done with this iteration of Soul, and we look forward to sampling the spicier Turbo version at a later date, and see what it brings to the Soul model family as well as the greater CUV segment.