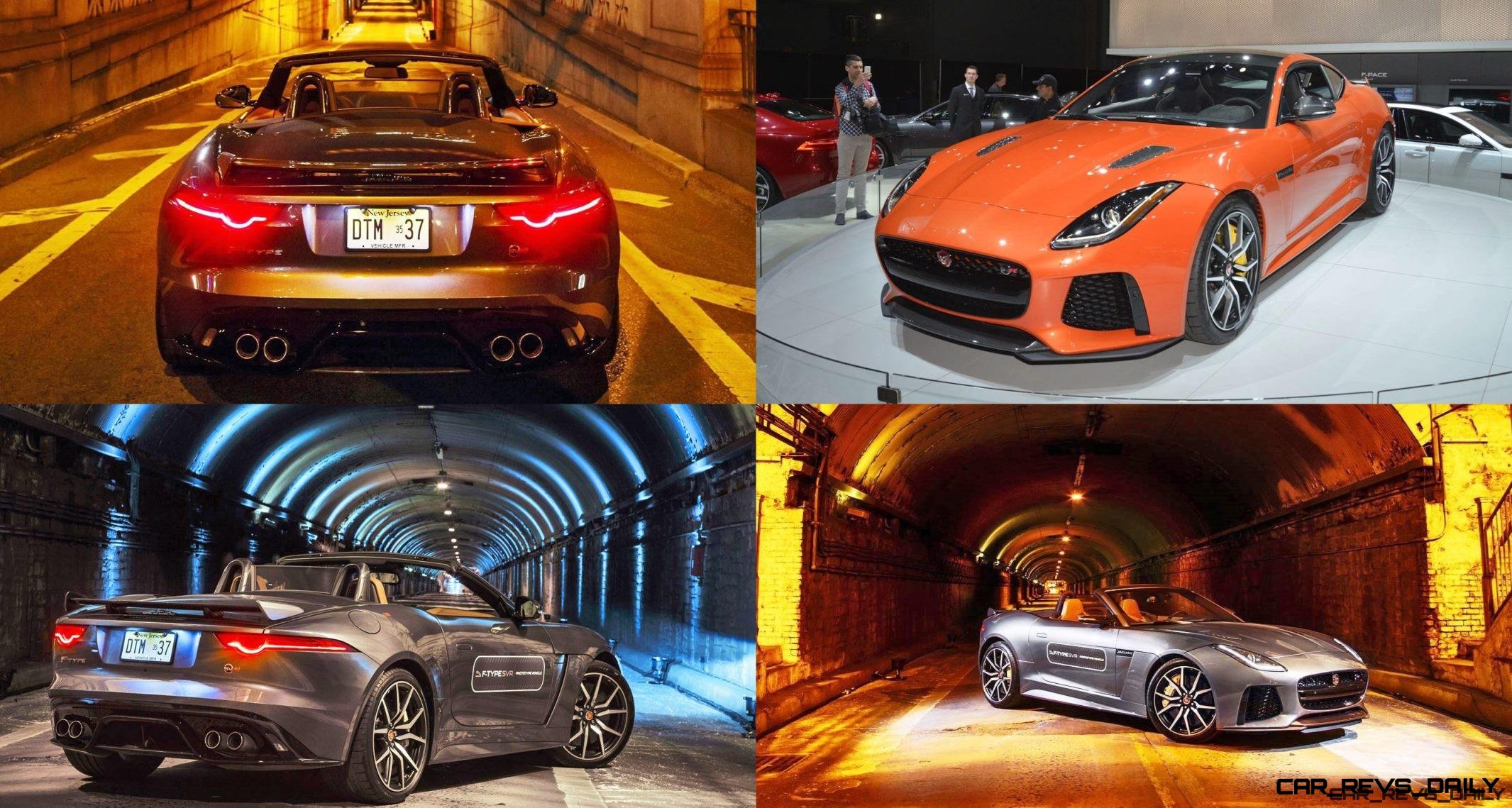 Just when I am grieving the loss of my press-loaner F-Type R AWD Coupe and its astounding brilliance… along comes an even hotter F-Type!

The new SVR range-topper delivers a 25HP bump in horsepower to 575, a new titanium exhaust system drops weight and adds sound, while advanced new aero details grace all sides of this quickest-ever Jaguar supercar.  And short of the XJ220 without its catalytic converters… this new SVR is also the fastest production Jaguar of all time.

Bottom line?  JAG is OFF THE CHAIN!

Clear the area people, this could get very dangerous!  Do not provoke the beast!

Just kidding, of course.  This new SVR is helpfully reigned in with an AWD system as standard for both the coupes and ragtops.

New styling details include a full revamp of the front bumper, extra downforce from a new chin spoiler, and extra intake cooling via exagerrated outer intakes with integrated aero spats.

A new-style ventwork appears in the hood with numerous small slats versus the clean outlets in the F-Type R, while new fender-back ventwork appears behind the front axle for the first time.  This deep slice into the alloy bodywork is fairly dramatic — and a great way to mark out the F-Type SVR from its $65k siblings.

Around back, we have a fresh active spoiler with a full-length horizontal element, plus vertical uprights at both edges to act as horizontal stabilizers at ultra high speeds.

Speaking of killer pace, the new SVR rocks its sonorous bellow and tsunami of torque right up to 200-mph dead for the coupe.  195-mph for the ragtop pushes the SVR deep into Aston, Bentley and McLaren territory — big game that the Jaguar hunter was forbidden from stalking before….!

The price for all this loveliness?  A bump of about $20 over the F-Type R takes the SVR’s base price to $125k.

The order books are open now.

A photo leak last week ended up online over at an Aussie car news website ahead of time — so it is nice of JLR to confirm that the leaked car is the real deal.  This is in contrast to a previous leak of the actual F-PACE weeks prior to its debut in Frankfurt 2014. Jaguar declined to confirm the car was real then… and led to a strange purgatory for auto writers.  To cover this unconfirmed item or not?

The end result was that once that indigo SUV was revealed live, it was already old news.

Positive PR moves to a Jaguar no-doubt fuming about the continued prelaunch leaks.

That is the pre-amble.

Now on to the main event: the hottest Jaguar since the C-X17 and XJ220!

This new F-Type SVR will be offered in hard or softtop forms, with target bullseyes on the back of the Nissan GT-R, AMG GT-S and Porsche 911 Turbo.

But the F-TYPE’s continued evolution now means the hilariously-playful machine comes in rear or AWD, stick or automatic, and even with some base turbo fours in the future. This is prime time to simultaneously move the car both up and down the market.

On the up side, the SVR will be a BEASTMASTER!

Power from its supercharged 5.0-liter V8 is said to be 575HP, but we’re hoping for a round 600.  Numerous tuners have shown the engine is capable of spitting seven bills of flame out the back fairly easily, so we hope SVR can make the 600HP dream a reality.

But all this to the back wheels?  Nope!

Jaguar confirms subtly below that the SVR F-TYPE will be AWD in saying it is an “all-weather supercar.”  Sweet — and helpful when trying to get into the mid-3-second range for a 0-60-mph sprint.

An all-new titanium exhaust system for the SVR is a final delicious detail.  This means the SVR will top the incredibly sonics of the already-delightful F-Type R and its 550HP motor.

The car will bow online on February 17th ahead of its live reveal Geneva in mid March. (MAHWAH, N.J.) – February 16, 2016 – Jaguar today digitally revealed the F-TYPE SVR, an even more extreme version of the already popular sports car and its first to wear the high-performance SVR badge, ahead of its auto show debut in Geneva on March 1. Developed to exploit the lightweight aluminum sports car’s full potential while retaining its inherent tractability and day-to-day usability, the Jaguar F-TYPE SVR will sprint to 60 mph in just 3.5 seconds2 and, in coupe trim, joins an elite club of cars capable of accelerating to 200 mph1,2.

By exploiting the fundamental capability engineered in to the F-TYPE from day one, the Jaguar Land Rover Special Vehicle Operations (SVO) division developed the brand’s lightest, quickest, most powerful F-TYPE and its fastest and most powerful series production road car ever with functional enhancements to the chassis, driveline and aerodynamics.

The F-TYPE R is already widely recognized in the sports car segment and represented the starting point for development of the more extreme F-TYPE SVR. Everything which contributes to the vehicle’s performance and handling dynamics has been meticulously re-evaluated, re-engineered and optimized by SVO, adding an even higher performance version of the F-TYPE to 2017 model year line up.