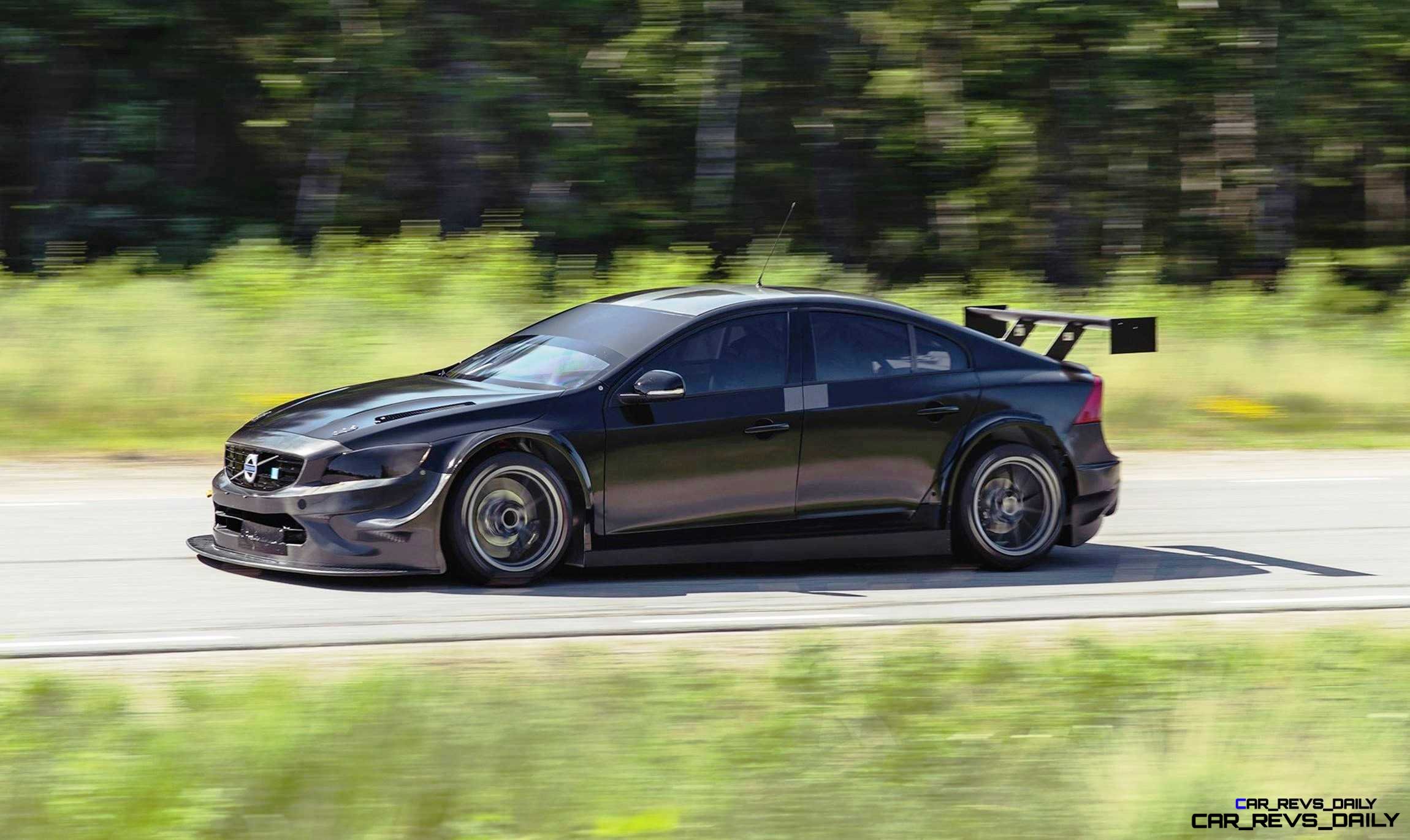 How awesomely evil does Volvo’s new WTCC car look — and sound!  Volvo just signed on for the 2016 World Touring Car Championship with its Polestar TC1 racecar — which is a highly upgraded version of the street machine. Now pushing out close to 600HP and wearing an all-new widebody aero kit, the S60 TC1 will compete with Polestar Cyan Racing next season (2016) and for at least two more years after that.

What is Cyan Racing?  It is the new name of the Polestar motorsports team, which remains independent even after Volvo announced a takeover of the Polestar brand and street upgrades division.

This means that the race team will have time to hone their gorgeous speed demon of a racecar for 2017 and beyond. No word yet on if a wagon version will join the crew in race red paintwork… but it is a possibility. =]

”We have chosen the FIA WTCC as our global motorsport platform as it combines the cutting edge technology of our Volvo cars with exciting racing all over the world. The championship enables us to further develop our technology and utilise development from the racing circuits directly to our products for performance oriented Volvo customers,” said Niels Möller, COO of Polestar, the Volvo Cars Performance Brand.

The announcement comes on the day 30 years after Volvo Cars claimed the 1985 European Touring Car Championship title with the iconic Volvo 240 Turbo. Fast-forward to 2016 and Polestar Cyan Racing will carry the legacy to a new challenge, by taking on the world title with the brand new Volvo S60 Polestar TC1 race car.

”This is a great day for all of us at Polestar Cyan Racing to announce our assault on the FIA World Touring Car Championship, a programme that boils down to one thing; to bring the world title to Sweden,” said Alexander Murdzevski Schedvin, Head of Motorsport at Polestar.

Cyan Racing is the official motorsport partner to Polestar, the Volvo Cars Performance Brand, a cooperation started in 1996 with six STCC driver titles and seven team titles under its belt, most recently securing a double 2015 STCC title for the third year in succession.

Following an evaluation season in the 2011 WTCC and two seasons in the Australian V8 Supercars, 2016 marks the start of the Polestar Cyan Racing’s first multi-year programme in a world championship.

”We have got respect for the task ahead of us that we take on with absolute commitment. This is a long-term effort and we have got an extensive testing programme during the winter that will continue alongside our first WTCC season in 2016 that is all about learning,” said Christian Dahl, CEO of Cyan Racing.

The 240 Turbo dominated the racing circuits in Australia, Finland, Germany, Portugal, New Zealand and Sweden during the mid-eighties. Volvo had proved the strength of their concept with a downsized four-cylinder turbo charged engine against the might of the likes of BMW, Rover and Jaguar, all using six, eight and 12-cylinder engines.

The all-new Volvo S60 Polestar TC1 race car carries the legacy of the 240 Turbo, featuring a newly developed 4-cylinder turbo engine of 400 horsepower, based on the cutting edge technology of the new Drive-E Volvo engine family.

”To use the Volvo engine as base and not go for the available generic WTCC race engine for our car was a no-brainer. Volvo engines are suitable for racing purposes in terms of power, technology and durability, as we have proven previously in the STCC, V8 Supercars and WTCC. The Drive-E engine is a perfect example with its low friction technology and exotic materials. We have been able to utilise a lot of development work from earlier racing programmes as well as road car development and we are keen to get going against the best in the 2016 WTCC,” said Mattias Evensson, head of engine development at Cyan Racing.

Further information on the 2016 WTCC Polestar Cyan Racing programme, including driver line-up, will be revealed in due course.

What is Polestar and Cyan Racing?

Polestar is the performance brand of Volvo Cars. Cyan Racing is the official motorsport partner to Polestar. Volvo Cars has acquired Polestar Performance AB, which comprises a range of performance products including performance engineered cars and performance drivetrain optimisations. Volvo has not acquired the racing division of Polestar, now named Cyan Racing and still owned by Christian Dahl.

Where will Polestar Cyan Racing compete in 2016?

What is the WTCC?

WTCC stands for the World Touring Car Championship and is one of five officially FIA (Fédération Internationale de l’Automobile, the sanctioning body of international motorsport) sanctioned world championships of racing. The championship runs across the globe and features heavily modified standard cars from manufacturers like Citroën, Chevrolet and Honda. The championship runs for 12 race weekends with two race heats per weekend each season on tracks like Shanghai International Circuti in China and the Nürburgring Nordschleife in Germany. The season starts in March and ends in November, further information is available at www.fiawtcc.com.