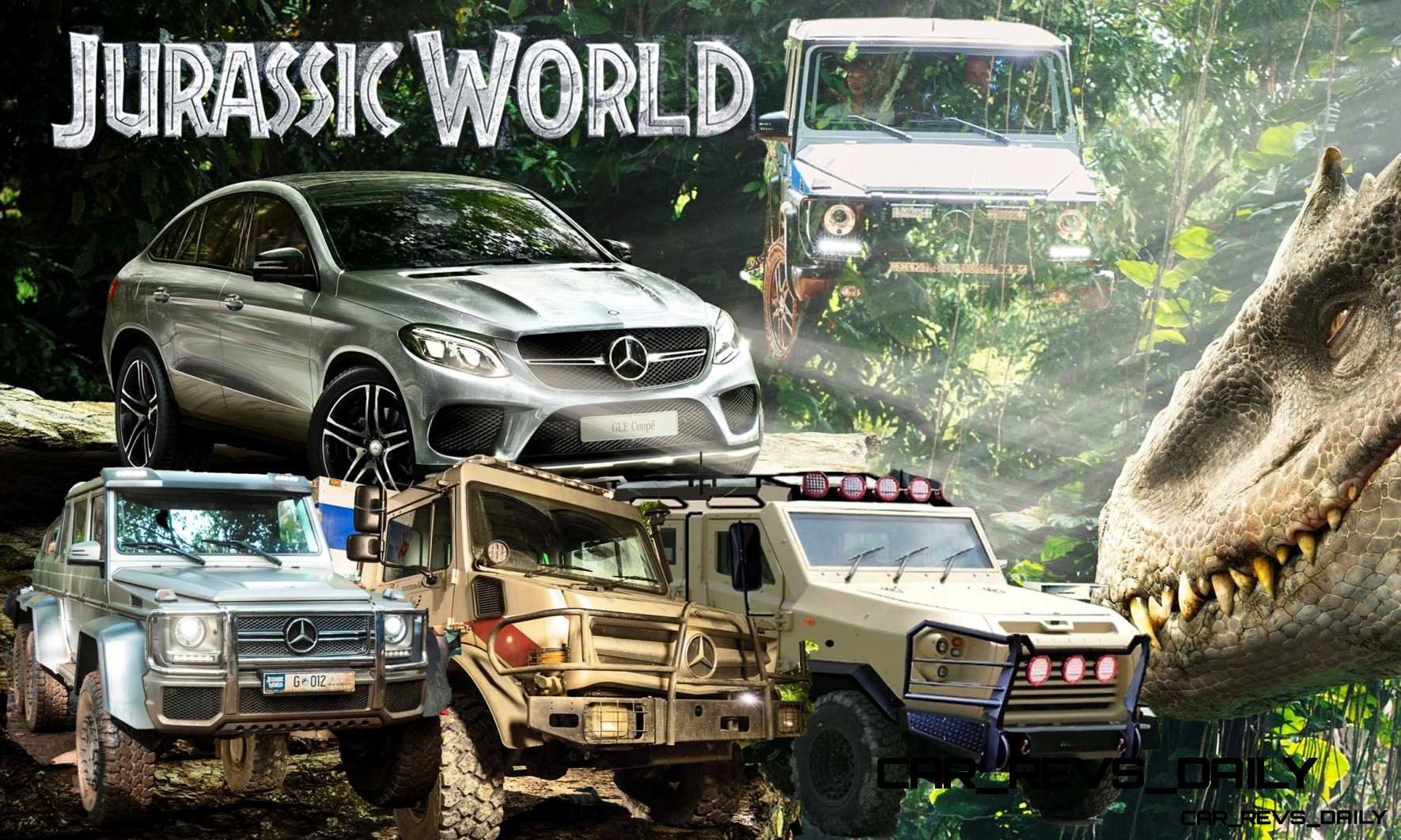 It has been almost 20 years since the Mercedes-Benz ML-Class made a silver-screen debut in Jurassic Park 2 in 1997 — best known for spinning all four wheels in reverse while trying to pull a research trailer back from the edge of a cliff.

The Mercedes SUV product-placement offensive has continued in the X-Men films and a few other since then, but never with the same action-packed, memorable drama as the ML320 in Jurassic Park: The Lost World.

The fact of the matter is that the Mercedes SUVs in movies have delivered ROI far beyond a typical ad campaign.

Mercedes is doubling — no, tripling — down on the new Jurassic Park film: at least six vehicles from the brand star in this summer blockbuster.

The new Mercedes-Benz GLE450 AMG Coupe is the most glamorous machine on Isla Nublar, but it is joined by its hardcore offroading brothers: the Galendewagen G-Class, the AMG G63 6×6 and the new flagship Unimog, the U5023. A few 4×4 Sprinter Vans even make a muddy on-screen debut with all four wheels scrambling to escape angry dinosaurs.

In fact, every road-legal truck in the film appears to be a Mercedes except for two military vehicles and a handful of ATV quad bikes. The Hummer H1 makes an appearance, as does the Textron Tiger, a Dodge Ram-based armored military troop transporter.

So what truck will make a daring escape up a river-bed with a T-rex on their trail?

We’d hop into the Unimog in a hot second, but the G63 6×6 would be a solid alternative!

We’re excited for the film — and to share these 20 on-set photos plus a behind-the-scenes video discussing Mercedes’ role in the movie. For an up-close look at the new GLE63 Coupe, check out this mega gallery from Amelia Island 2015

Check out Coudert’s Flickr stream and social links below for everything Jurassic World! 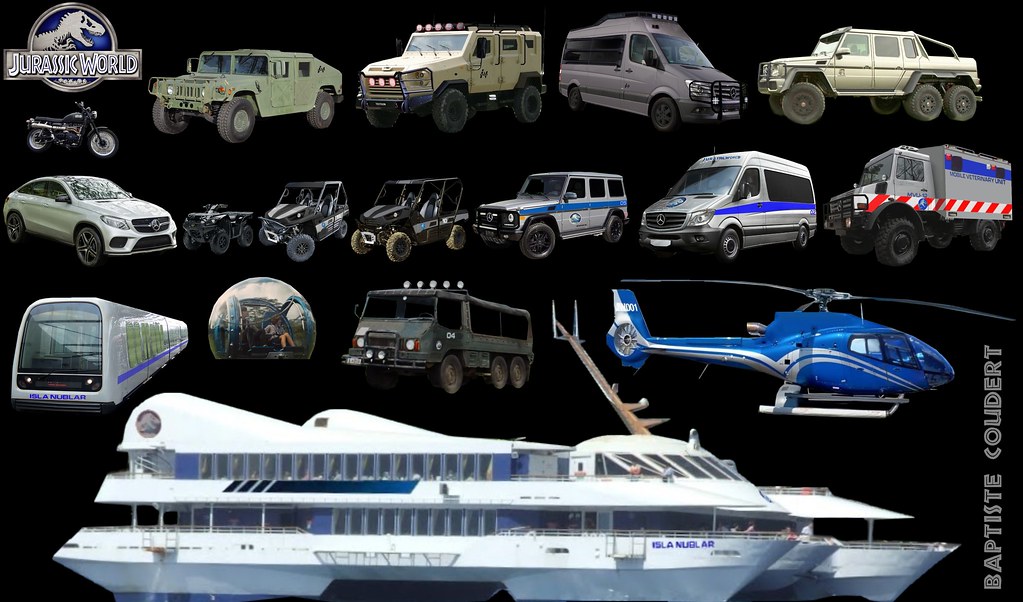 The dinosaurs are back

May 18, 2015 – Stuttgart — This summer, when the long-awaited next installment of the groundbreaking Jurassic Park series, Jurassic World, arrives in theaters, an entire fleet of Mercedes-Benz vehicles will share the spotlight. Alongside the iconic G-Class, Unimog, Sprinter models and the all-new GLE Coupé will play a leading role in the epic action-adventure. Mercedes-Benz will accompany the release of the film with a comprehensive co-promotional package that includes a television commercial, print and online advertising, dedicated microsites and social-media activities. The commercial, starring the Mercedes-Benz vehicles from the film, launches today in the U.S. and Europe. Additionally, a custom key visual was developed for all communication in which the all-new GLE Coupé is seen eye-to-eye with the film’s fearsome Indominus rex.

“In 1997 the Mercedes-Benz M-Class made its first official appearance in the Hollywood Blockbuster ‘The Lost World: Jurassic Park’. Today, 18 years later, another Mercedes-Benz car will debut in a significant role in the latest installment of the groundbreaking Jurassic Park series named Jurassic World: the new GLE Coupé” says Dr. Jens Thiemer, Vice President Marketing Mercedes-Benz Cars. “We are delighted to continue our partnership with a multitude of Mercedes-Benz vehicles and will promote the film and our cars with many exciting global marketing activities.”

The Mercedes-Benz GLE 450 AMG Coupé makes its film debut as the official car of Jurassic World operations manager Claire, played by Bryce Dallas Howard. When Claire must confront a crisis well beyond what she can handle alone, she takes the new Mercedes-Benz GLE Coupé (showcasing its off-road capabilities) and joins behavioral researcher Owen (Chris Pratt) on a mission in the lush jungle of Isla Nublar.

In addition we see Owen piloting the G-Class, the patriarch of all Mercedes-Benz SUVs. The film also features the Unimog, cast as a dinosaur ambulance, as well as a G 63 AMG 6×6 and various Sprinter models. “The fleet of Mercedes Benz vehicles fit perfectly into Jurassic World. They are classy, sophisticated, and sexy — exactly what would exist in a modern international theme park”, says producer Frank Marshall.

Global promotion via all channels of communication

The Mercedes-Benz promotional campaign kicks off prior to the June 12th release of the film. Starting May 18th, Mercedes-Benz will launch a TV commercial (http://mb4.me/Jurassic-World_TVC) showcasing footage of all the Mercedes-Benz vehicles appearing in the film. But it is the all-new GLE 450 AMG Coupé which will captivate viewers as the “Alpha Car”. The ad is supplemented by extensive print, online and out-of-home publicity measures. In Germany, for instance, the key visual will be featured in advertisements, on posters and flyers. Movie fans can discover more about the film and the featured Mercedes-Benz vehicles on a special Jurassic World microsite (www.mercedes-benz.com/jurassicworld) that will show exclusive behind-the-scenes material and a selection of additional images of the set, which explain how the film was created and the roles of the Mercedes-Benz vehicles. Exclusive content will be released and discussed with fans on Mercedes-Benz social media platforms (Making-Of: http://mb4.me/Jurassic-World_MO). Jurassic World model vehicles of the G-Class and G 6×6 will be available at the Mercedes-Benz Accessories online store as well as in toy retailers. Mercedes-Benz will also support the US premiere in Hollywood on June 9th and French premiere in Paris on May 29th.

Steven Spielberg returns to executive produce the long-awaited next installment of his groundbreaking Jurassic Park series, Jurassic World. Colin Trevorrow directs the epic action-adventure based on characters created by Michael Crichton. The screenplay is by Rick Jaffa & Amanda Silver and Trevorrow & Derek Connolly, and the story is by Rick Jaffa & Amanda Silver. Frank Marshall and Patrick Crowley join the team as producers.

Jurassic World will be released in 3D by Universal Pictures on June 12th, 2015. www.jurassicworld.com

Making-Of about the Mercedes-Benz vehicles in Jurassic World:
http://mb4.me/Jurassic-World_MO