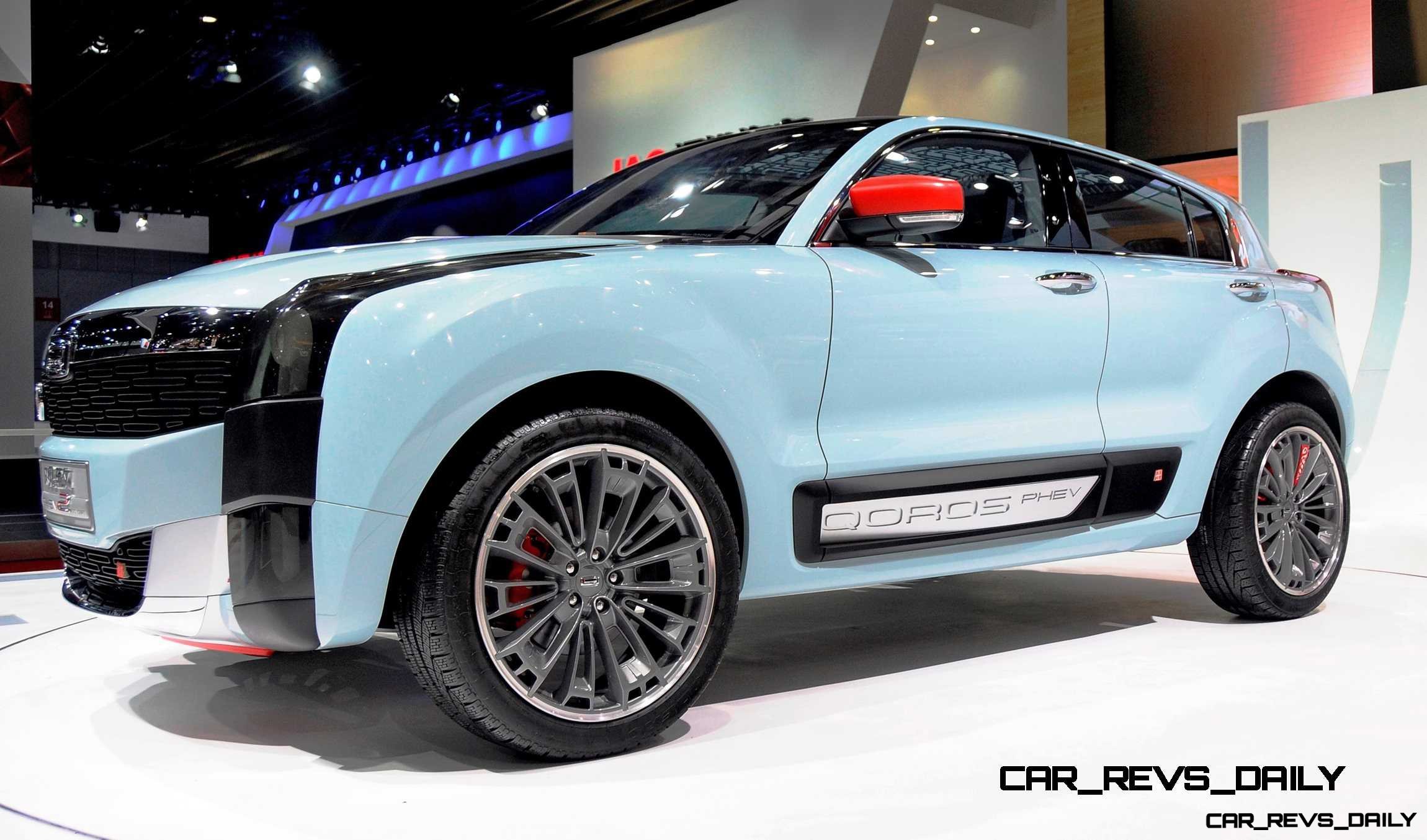 Qoros is by far our favorite Chinese car brand — plucking exceptional talent from the UK car scene like Gerte Hildebrand of MINI fame and Jamie Barrett from the RCA design program.

The goal is to bring global car safety, design and equipment standards to China-made vehicles. This is more than lip-service: QOROS has the only Chinese vehicles to pass the tough EuroNCAP crash tests and on sale across the highly competitive European car market.

Qoros recognizes the opportunity for new brands in the crossover and SUV space — with this latest Qoros 2 SUV concept a really interesting design statement.Production Qoros models have been fairly lackluster in their style, so this latest concept definitely represents the next step in the brand’s evolution.

A compact SUV about the size of the Chevy Trax, Nissan Juke or Jeep Renegade/Fiat 500X — the Qoros 2 has a very muscular and confident appearance from all sides.

A blocky and chunky stance has upright glass angles for the windhsield and tailgate, but avante-garde details in the slim glasshouse in profile. Very striking and double-take-inducing nose and tail designs are pretty fresh, while the trims and color choices represent Qoros’ finger on the pulse of Chinese tastemakers.

A final interesting element is the charging system for this PHEV — where the full plugin process is automated and touchless. This will appeal to skittish buyers afraid of electric shocks, as well as simplifying the vehicle exit process for owners. How classy is owning a Tesla when you have to physically plug in the car every time you get home? We all have constantly-dying phones already — so another battery is the last bit of added anxiety most yuppies want after a long day. The Qoros 2 SUV PHEV Concept is a sub-compact SUV design study with plug-in hybrid technology. Featuring a striking new design theme, it is conceived to appeal to trendy, creative young people. It points to possible future design, technology and product expansion strategies for the brand.

At this year’s Shanghai Motor Show, Qoros is unveiling the Qoros 2 SUV PHEV Concept, offering a look into the possibilities for the brand’s future. Featuring a striking new design theme, the Qoros 2 Concept is a design study that was conceived as a possible future entrant into the world’s fastest growing passenger car segment, the B-segment.

The concept car signals Qoros’ intentions to tackle new market segments with new technologies in the future. Qoros already has three production cars, the Sedan, the Hatch and City SUV, all of which sit within the C-segment.

With advanced plug-in hybrid electric technology incorporated within its 4WD drivetrain, the Qoros 2 SUV PHEV Concept car will appeal to young, open-minded and efficiency-conscious metropolitan consumers. Charging is undertaken via a process inspired by the aerospace industry’s “Don’t touch a cable” principle, and represents an industry first.

The 2 Concept combines Shanghai spirit with German-inspired design. The colours and finishes used pay homage to Chinese tradition. The exterior colour is ‘Misty Cyan’, a light green/blue inspired by ‘Ru Kiln’ porcelain, used during the Song Dynasty and still very popular today. The red accent details are ‘Cinnabar Red’. Cinnabar is a material that can produce a deep red ink, and has been used in Chinese art for centuries.

The 2 Concept features a long wheel base, short overhangs and a wide track, offering a reassuringly planted and rugged road presence. Styling of the lower body is strong and wide generating a muscular impression while reinforcing the same feeling of safety and security as expressed by the current models. Coupe styling lines of the upper body produce an emotive and sporty appeal.

The 2 Concept is the first car Qoros has designed to showcase a new vertical styling theme, presenting a rugged, masculine appearance to signal Qoros’ future move into the B-segment.

The lamp clusters at both the front and rear now feature a vertical design, moving away from the current horizontal theme as seen on the Hatch, Sedan and City SUV. Extending up and over the quarter panels, the lamp clusters give a dynamic impression of movement. The vertical theme continues into the front bumpers which flank the edge of the vehicle, extending from the top of the headlamp cluster and continuing down through the fog lamps. The bumper features an open V-shape that dominates its muscular face. The face also features a lower chrome trapezoidal front grille frame, the lower edge of which forms a protective front skidplate.

Air intakes in the front bumper have been designed to channel the airflow to cool the front brakes. The roof spoiler and rear diffuser optimise the aerodynamic flow, while extended wheel arches add to the bold, solid look.

A floating roofline and high waistline add a touch of elegance and class to this rugged vehicle. Roof rails add load-carrying practicality and lower bodyside protective cladding inserts accentuate the masculine robustness of the car.

The 2 Concept is still unmistakably a Qoros. The signature Qoros design DNA can still be seen throughout the car. The LED strips in the tail lamp cluster feature the power of three theme, as seen on the Sedan, Hatch and City SUV. The rear window line still features the hockey stick design while the circular design articulation of the front lamp clusters, fog lights and tailpipes is similar to that of the current production models.

The Qoros 2 SUV PHEV Concept features a panoramic glass roof, which makes for a light and airy passenger cabin while incorporating a Chinese pattern in white jade. The pattern is traditionally used in Chinese windows, and synonymous with the layout of “Siheyuan” a historical unique folk house in the Hutongs in Beijing with a long history in Chinese architecture. A QR code has been embedded within the design of the roof graphics, directing viewers to the Qoros website. The driver’s side rear wheel also pays homage to the Chinese Year of the Goat celebration with a special rim inlay design.

Looking more closely at the car, there are nine name ‘stamps’ featured throughout the exterior and interior. These reflect the nine design team members that worked on the car, but also have a deeper meaning. In mandarin, Nine九 (pinyin: jiŭ) sounds exactly like 久 (jiǔ) – which means “long lasting” or “a long time” and therefore is often used in weddings. But the number nine also describes something “big” or “more’. This reflects the fact that more than just nine designers and technicians were involved to make this project happen. Simple, minimalist interior design is based on bold graphics and incorporates some signature cabin designs from today’s existing production cars, such as elegant horizontal lines and the ‘floating’ upper instrument panel. The colours carry on the exterior design theme, with white elements designed to reflect the look of white Tallow Jade, and other features light clay shades and natural materials like bamboo. In combination with cold metallic features and Cyan ambient light it develops a modern and futuristic appearance.

An innovative digital instrument cluster displays all the information the driver needs in a full colour display and is linked to the pop-up drive mode controller in the floor console.

The climate control system incorporates multi-zone temperature control allowing each occupant to personalise their own settings with the temperature displayed in the centre of each air vent for true individual control.

As with all Qoros vehicles, the Qoros Multi Media Hub (MMH) is the central focus of the dash, through which the latest version of Qoros’ cloud-enhanced connected services platform, QorosQloud, can be accessed.

The Qoros 2 SUV PHEV Concept boasts exceptional, class leading interior space with a seating position which provides greater visibility of the vehicle’s surroundings. An elevated seating position gives a commanding view of the environment for a feeling of safety and security, and is ideally suited to both urban and active lifestyles.

The interior space provides excellent practicality thanks to long doors for easy entry and exit, while a wide rear tailgate opening and low load height makes it easy to load larger and heavier items, perfect for active weekend pursuits.

The interior is highly versatile, a cutaway floor console incorporates a large storage space while the trunk has many individual storage compartments to ensure it provides the flexibility demanded by the modern consumer’s active lifestyle; running shoes, for example, can be stored in a sealed compartment to prevent odours from entering the passenger cabin; other compartments could be used to securely store valuable equipment out of sight.

Drivers can choose a range of driving modes through the pop up controller that rises from the floor console:

Hybrid-specific apps are included as part of QorosQloudTM, providing constantly updated remaining range estimations based on various electric and gasoline drive modes combined with live traffic, weather conditions and driving styles. The driver can use a pop-up drive mode controller that rises from the floor console to select one of several drive modes.

The 2 Concept incorporates innovative charging technology that has been inspired by aircraft fuelling, an automotive industry first. A foldable charging ‘probe’ – containing the electric charging socket – is hidden under a cover at the lower leading edge of the windscreen; it will automatically rise at the touch of a button on the dash.

Based on the “Don’t touch a cable” principle that is stipulated for the aerospace industry, the electric charging probe unfolds to a specific height to meet ‘receiver sockets’ on charge point pods at the kerb, in car lot charging bays or installed in garages at home. This innovative charging system means drivers never need to get hands dirty by touching charging socket covers and cables, and makes the charging operation safer.

Qoros was founded in 2007 and is headquartered in China. Its international team of experienced automotive experts is leading the development of a range of vehicles that exhibit world-class standards of design, engineering and quality.

Shortly before its China launch in December 2013, the Qoros 3 Sedan became the first car developed in China to be awarded the maximum five-star crash test rating by Euro NCAP and is one of the safest tested in the organisation’s 16-year history.

Amongst a host of other accolades, the Qoros 3 Hatch, launched in China in June 2014, won an Honourable Mention in the prestigious Red Dot Awards in recognition of the quality of its design.

The City SUV – the brand’s third production model – made its global debut at the Guangzhou Auto Show in November 2014 and went on sale a month later.

Qoros’ all-new, highly-efficient and environmentally-sustainable assembly facility in Changshu is ramping up series production of the Qoros 3 Sedan, Hatch and City SUV.