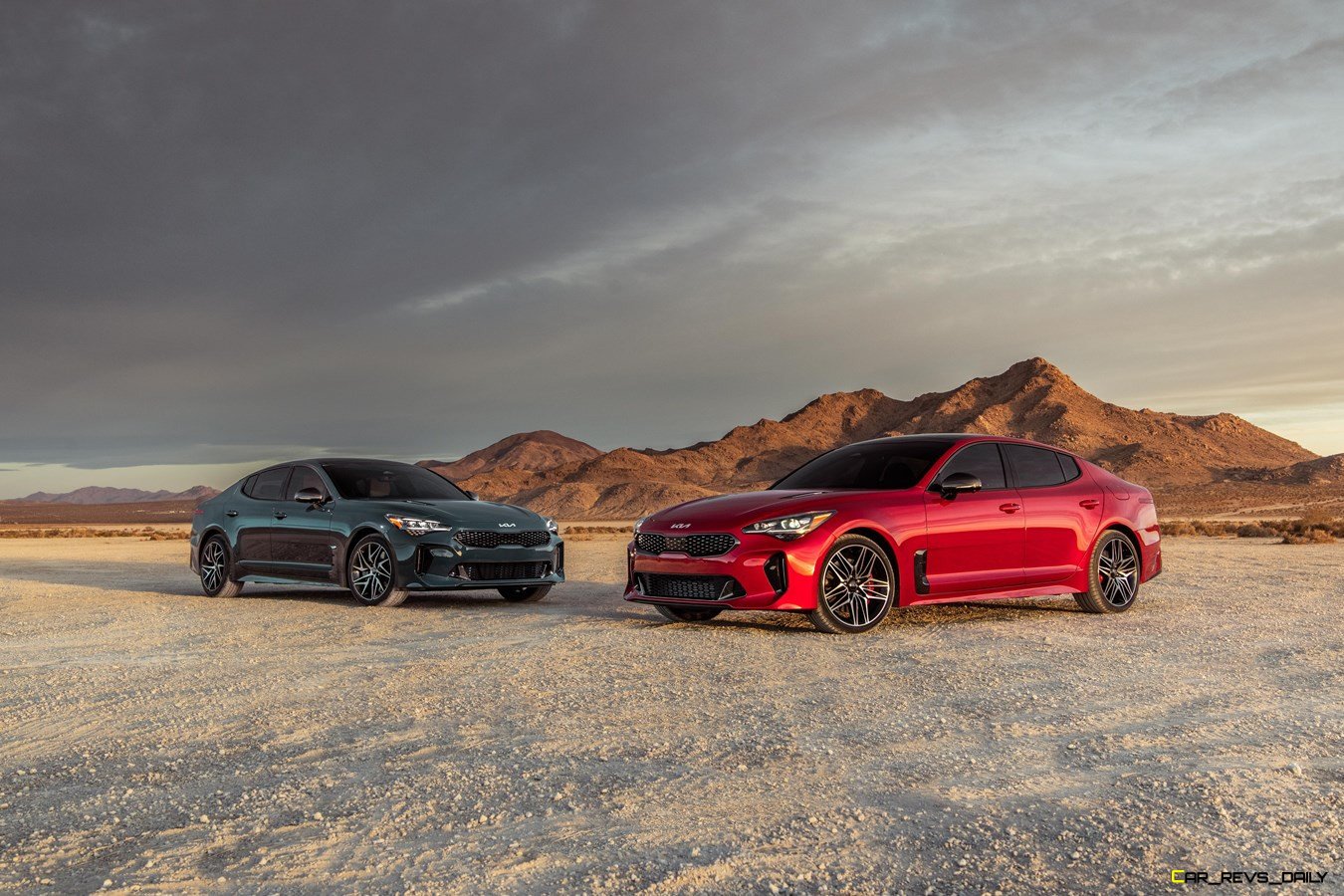 When the Kia Stinger first appeared back in 2017 as an early 2018 release, many scoffed at Kia’s claims that it had built a contender that could go head to head with Germany’s best. But the sleek four-door proved to be a winner for Kia, and it rapidly transformed into one of the most exciting Kia offerings that the brand has ever produced. But we always welcome a good round of updates from time to time, and Kia has delivered the goods for the 2022 Stinger, which enhances many of the things we love about it while adding some new tricks to the mix.

When you compare the 2022 version to the outgoing Stinger, you might be a bit hard-pressed to spot some of the updates, with the Stinger retaining much of its core design DNA. However, look closer, and several subtle changes draw the eye in for a closer look. The front fascia now features standard LED headlights with a distinctive DRL design. Still, Kia also offers the option of replacing them with “Stinger Signature” units that have a unique look, especially at night.

LED taillights also make their way to the car and are now bridged by an all-new taillight design that actually bridges its way into the liftgate. GT models go all-in on the LED treatment and even include LED turn signals. Other changes include new 18 and 19-inch wheel designs, which were inspired by geometric shapes, and a new design for the meaty exhaust tips. Kia’s controversial new logo also adorns the wheel caps and the hood though we actually think it meshes nicely with Stinger’s updated suit of clothes. 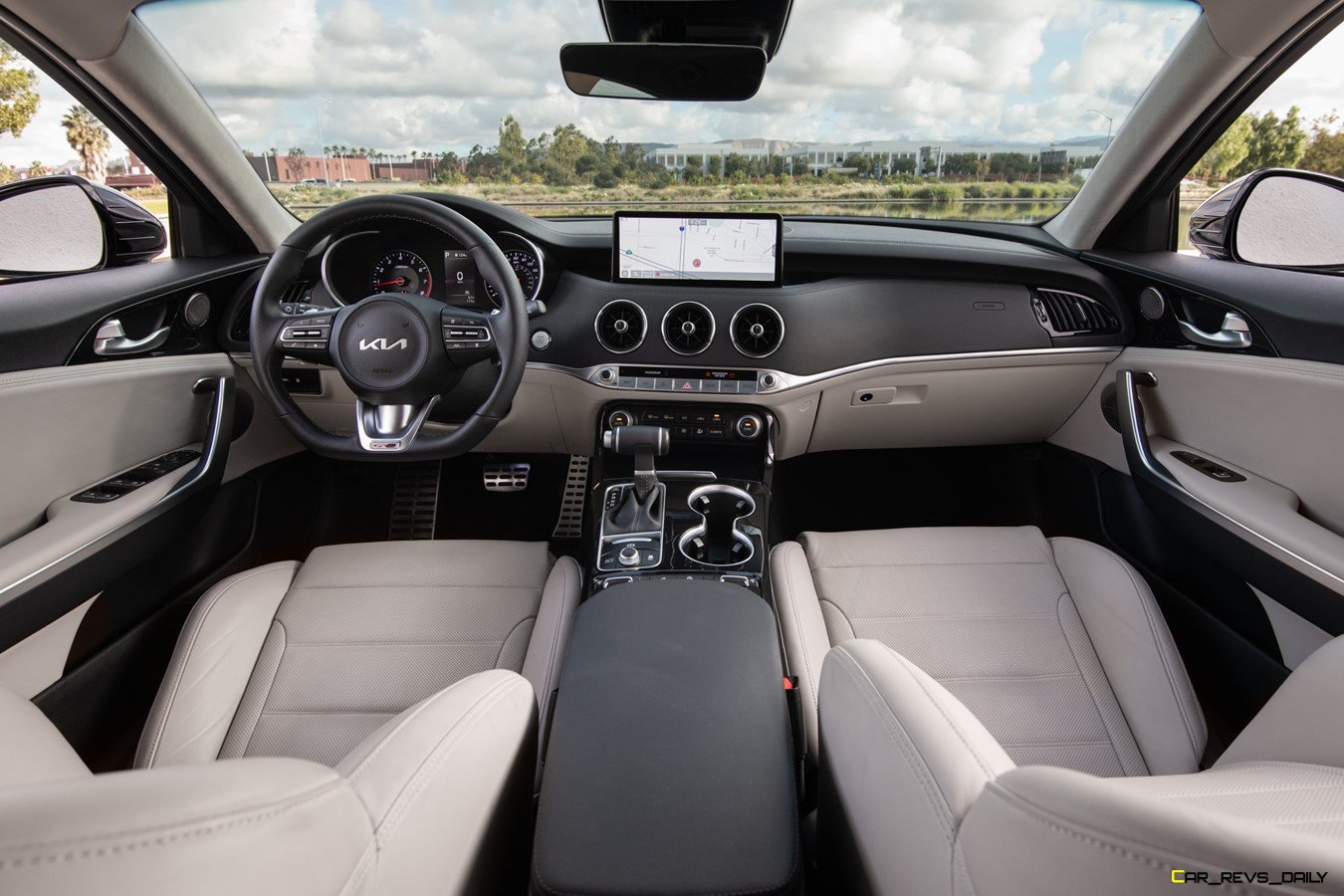 The subtlety theme continues inside the cabin of the 2022 Stinger, which benefits from its fair share of minor updates. They include some tweaks to the trim, with more chrome and black gloss accents being used on the dashboard to enhance the Stinger’s premium feel. GT models get new stitching for the door panels. The optional Nappa leather appointments get a new design that gives them a chain-link appearance, with Kia designers claiming that they were inspired by the wristbands on modern watches.

A 10.25-inch touchscreen infotainment system is standard in the Stinger, and it bundles both Apple CarPlay and Android Auto functionality into one place. It also allows for more than one device to be connected via Bluetooth, and it even features a novel split-screen mode. The instrument cluster houses a 4.2 inch TFT screen that’s easier to read at a glance, but buyers looking to take advantage of Blind Spot View will have to upgrade to the larger 7-inch cluster.

The biggest changes that occur, though, are found lurking under the hood, with the 2022 Stinger bringing some key changes on both sides of the trim ladder. The entry-level version’s 2.0-liter turbocharged four-cylinder has been replaced with an all-new 2.5-liter turbocharged four-cylinder that now produces 300 horsepower and 311 lb-ft of torque. Kia claims that the enhanced power comes without sacrifice to fuel economy and allows the car to hit 60 mph in 5.2 seconds.

The GT model retains the existing 3.3 liter turbocharged V6, but power has gone up slightly to 368 horsepower, and pull has also risen slightly to 371 lb-ft. That combination is enough to launch the GT to 60 mph in 4.7 seconds. An electronically operated variable exhaust system helps enhance the Stinger’s soundtrack, especially when the GT is allowed to launch off the line. Rear-wheel drive is standard, but buyers can add an optional all-wheel-drive system to help give the Stinger better four-season capability.

An eight-speed automatic is the sole transmission choice for both models, and Kia promises revised shift logic to try and make the Stinger a better weekend track warrior and a backroad carver. Sadly the Stinger will not offer a manual transmission, but the eight-speed is an excellent offering, and we certainly enjoyed our prior encounters with it in older Stingers.

Kia has not released formal pricing for the 2022 Stinger lineup but did confirm that the model will begin arriving in Kia showrooms this spring. When it does, the Stinger will have three trims available (GT-Line, GT1, and GT2) trims. A special “Scorpion Edition” Is also entering the Stinger lineup with that model bringing edition exclusive exterior and interior appointments. However, Scorpions will not be a part of the initial launch and will appear later in the year.

Thankfully the Stinger will still offer an impressive array of safety equipment, including Forward Collision Alert, Rear Cross-Traffic Alert, and Navigation-based Adaptive Cruise Control. Kia also chose not to address rumors of the Stinger possibly evolving into an all-electric offering down the road. Still, we’ll keep our eyes peeled for any developments (stranger things have happened in the automotive industry.)