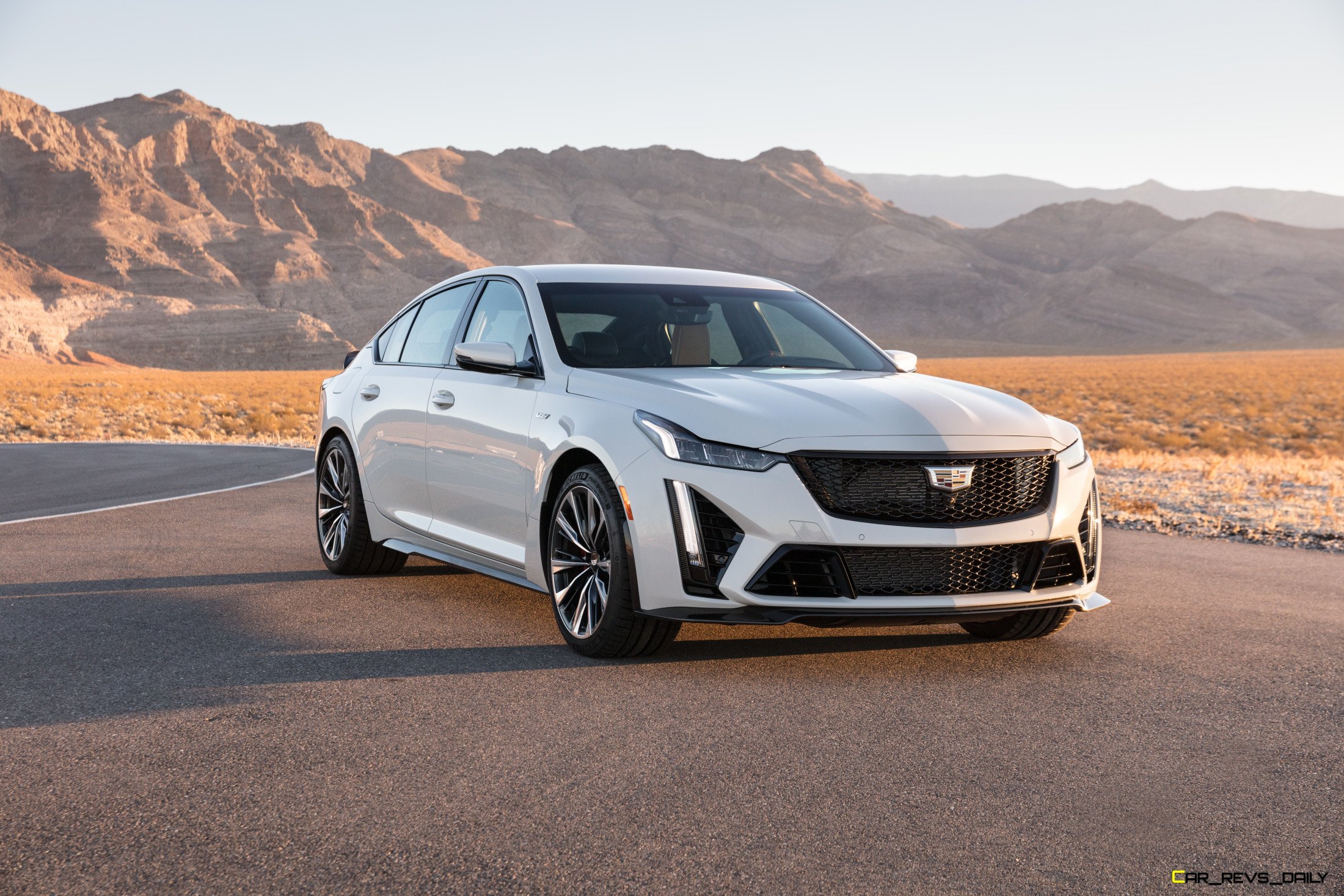 Were you one of the Cadillac faithful that threw their hands up in the air in disgust when Cadillac unveiled the CT4 and CT5 V-Series models in 2019? If so you weren’t alone with those models lacking some of the vigor that once defined their ancestors. Cadillac revealed that it was planning on making a new performance ladder for the CT4 and CT5 and that a hotter dish of performance was coming. After countless teasers as well as a few glimpses at select race events, Cadillac has finally unveiled the 2022 Cadillac CT5 and CT4-V Series Blackwing models and they were certainly worth the wait.

When we last saw the duo, Cadillac released a lone teaser image that showed the front styling as well as the new wheels that will be making their debut in the Blackwing lineup. However, we didn’t have a chance to see the rear styling of the pair up close. Cadillac has relented and has given us a full view of all the styling. As mentioned in our prior Blackwing related item the exterior styling here does not stray too far from the basic design DNA for both the CT4 and CT5. But beneath the familiar sheet metal lurks some key changes that make them stand out from lesser models.

A new mesh style front grille promises to improve air flow versus prior models and it even comes with accompanying reed assemblies that help manipulate backdraft angles to help channel more air into the engine, intercooler, and more. To our knowledge this is the first time that Cadillac has used these reeds in a production model and it shows that no corner was shaved in the quest for performance. Other touches include a bigger front splitter, rear spoiler, rear diffuser as well as trim exclusive fender vents. An optional carbon fiber package enhances styling even further while also reducing lift when the pair are pushed hard at the track. Cadillac reps revealed that the package cuts rear lift on the CT4-V Blackwing by a massive 214 percent and we’re confident the CT5 version has equally potent lift reduction numbers.

With the exterior doing its best to loudly get your attention it should come as no surprise that the interior gets in on the act too. Cadillac will give Blackwing buyers three different levels to choose from (Base, Mid-level, and Up-level) with each tier offering its own blend of luxury appointments. They include standard Apple CarPlay and Android Auto capability as well as wireless phone charging and other luxury goodies.

Buyers will get a set of default leather seats as standard, but they can select from two different optional seats depending on the model they choose. If your a CT4 owner you can equip your ride with 18-way power adjustable sport seats with built in heat and cooling capability as well as lumbar massage. Step up to the CT5 version and you can get carbon fiber tinged racing seats. The bigger sedan also gets Surround Vision technology that includes a heads-up display system, as well as the ability to record your track exploits. A 12-inch digital instrument cluster also comes along for the ride and comes with several configurable modes including a built in track mode function. The Blackwings will also be the second and third models to feature the AKG premium sound system with the CT4 getting a 14-speaker unit while the CT5 adds one more for a total of 15 speakers.

Multiple rumors suggested that Cadillac was preparing to dust off some welcome gems from the past for duty in the Blackwings and Cadillac is indeed doing just that when it comes to providing owners with plenty of thrills and chills. Inherited from the axed ATS-V and the CTS-V models, the 6.2 liter supercharged V8 and the 3.6 liter twin-turbocharged V6 make a bold and rather dramatic return from the grave to become the beating heart that motivates these two sedans along.

Buyers that get the CT4-V Blackwing will get the V6 which has been tweaked by GM engineers to produce 472 horsepower and 449 lb-ft of torque. Cadillac claims that the engine is capable of making the CT4 version of this model make the sprint to 60 mph in 3.8 seconds when equipped with the automatic transmission with the speedometer topping out at 189 mph. Looking at some of the specs, and it’s clear that the CT4-V Blackwing is a massive leap forward from the ATS-V with engineers managing to not only enhance air flow but also rework the way parts like the oil squirting system functioned. Cadillac claims that the CT4 version of the Blackwing is the fastest sub-compact Cadillac in its class. 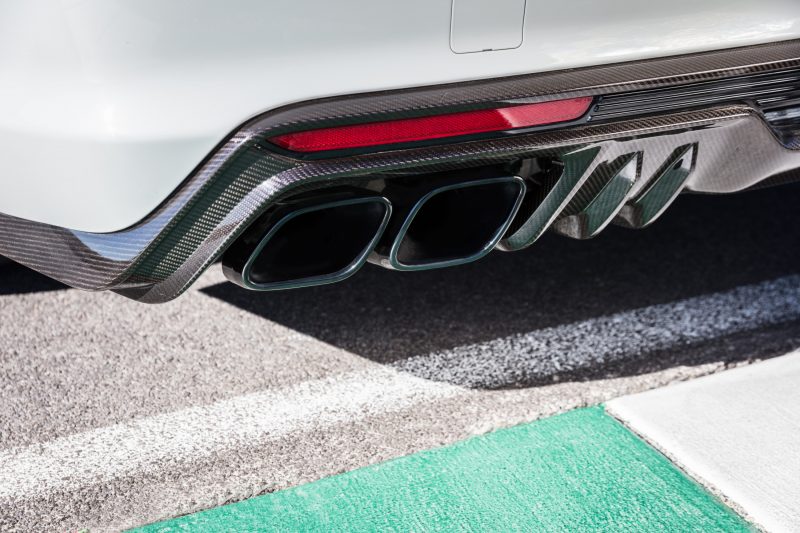 As for the CT5-V Blackwing it goes all in on speed with that model being gifted with the CTS-V’s 6.2 liter supercharged V8. That particular engine has also been worked over by engineers with the potent belt driven monster now producing 668 horsepower and 659 lb-ft of torque with that variant making the sprint to 60 mph in a slightly brisker 3.7 seconds. Cadillac is claiming that the CT5-V Blackwing is capable of going over 200 mph though the brand stopped well short of revealing the exact figure. Cadillac claims that this model sees a 46 percent improvement in air flow versus the CTS-V and that it’s also the most powerful Cadillac ever produced.

Both models come with a six-speed Tremec sourced manual transmission as standard, but buyers can swap it out for GM’s venerable 10-speed automatic transmission. We suspect that the 10-speed will be the volume transmission here, but we will give Cadillac props for giving customers the opportunity to have a shift it yourself option especially as many automakers are abandoning the old-school staple to maximize sales and profits.

When Can I Buy A Blackwing For My Garage?

Cadillac revealed that it will be opening up ordering after both cars make their virtual debut with the first deliveries expected to take place later this summer. Pricing for the CT4-V Blackwing will start at $59,990 and the CT5-V Blackwing will start at $85,990. This pricing helps put both vehicles firmly in the heat of things in their respective segments with the CT4-V Blackwing being targeted towards rivals like the BMW M3, Mercedes C43 AMG as well as the Audi S4/

The CT5-V Blackwing goes after much bigger fish with that model aiming for the BMW M550i, Audi S6 and the Mercedes E53 AMG. While the duo will be at a slight disadvantage when it comes to brand recognition and presence. The fact that they are currently the only performance sedans to offer a manual transmission should give them a unique vibe especially with buyers that prefer a more traditional sport driving experience. Rear wheel drive is standard issue, but buyers can opt for an all-wheel drive system which does add a bit to the sticker price but delivers exceptional levels of grip and helps sharpen up acceleration for both cars. Rarity will also be in their favor with Cadillac only setting aside 250 copies of each model.

With all of this performance on hand, the 2022 CT4-V and CT5-V Blackwings appear to be the defacto expression of Cadillac performance and how much it has improved over the years. Those looking to go back to the beginning of this family tree can check out our piece on the Catera Steinmetz concept here.